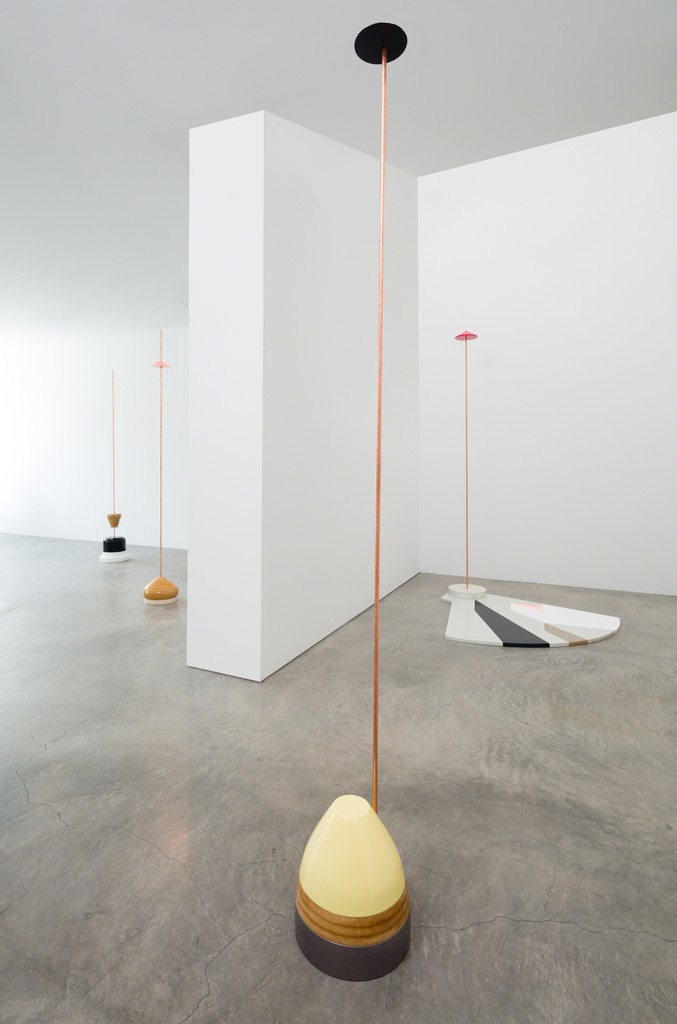 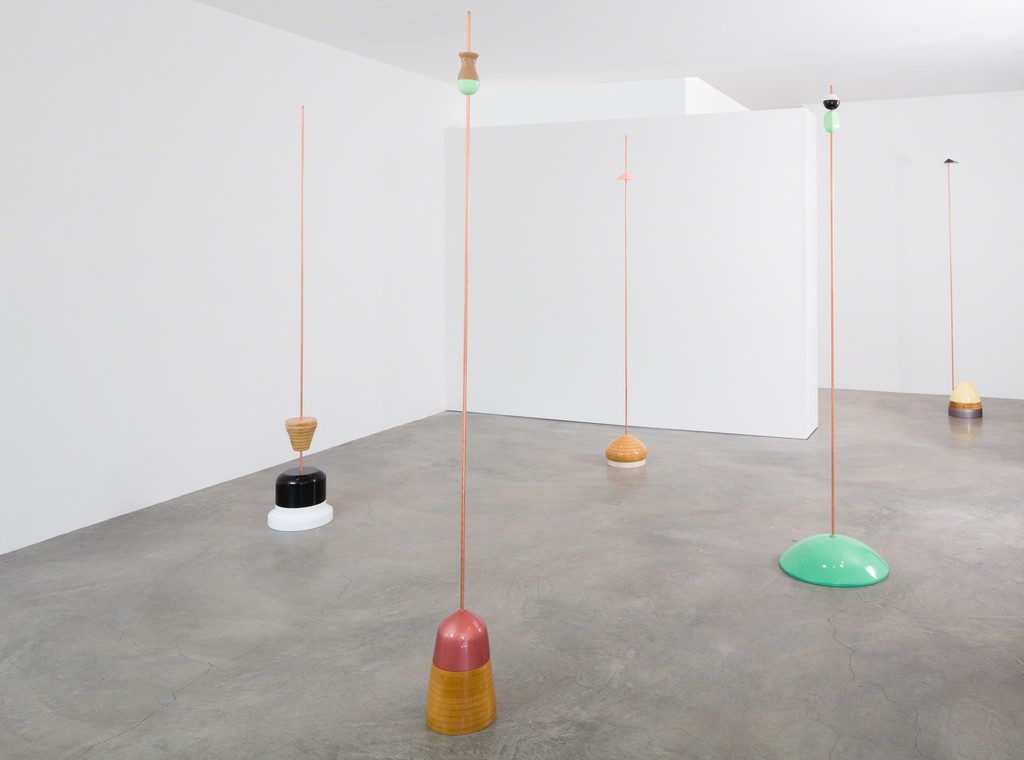 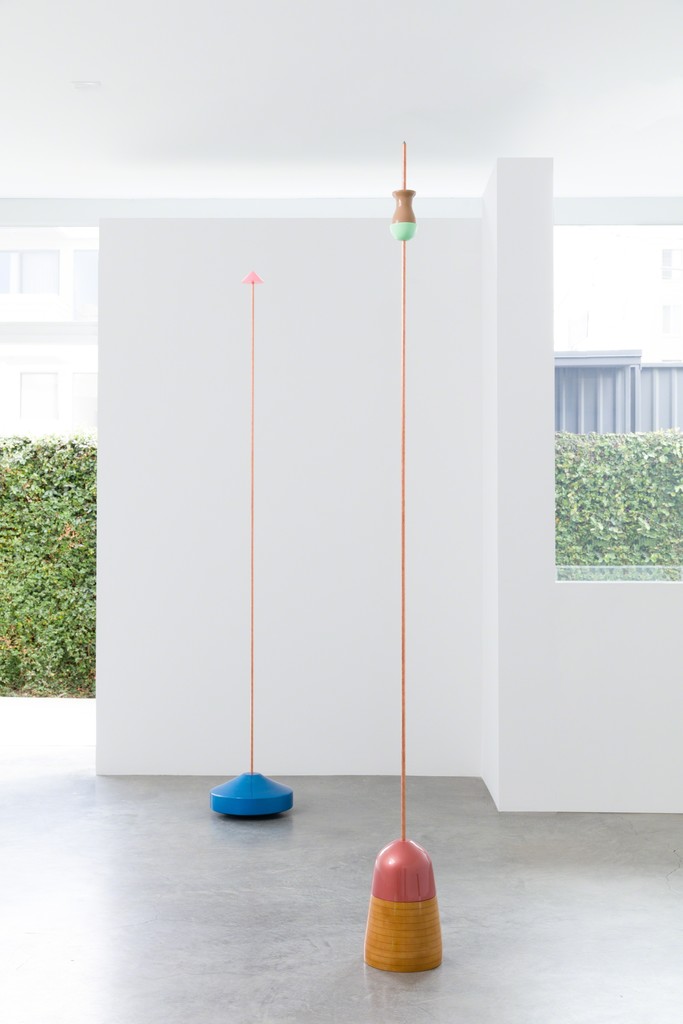 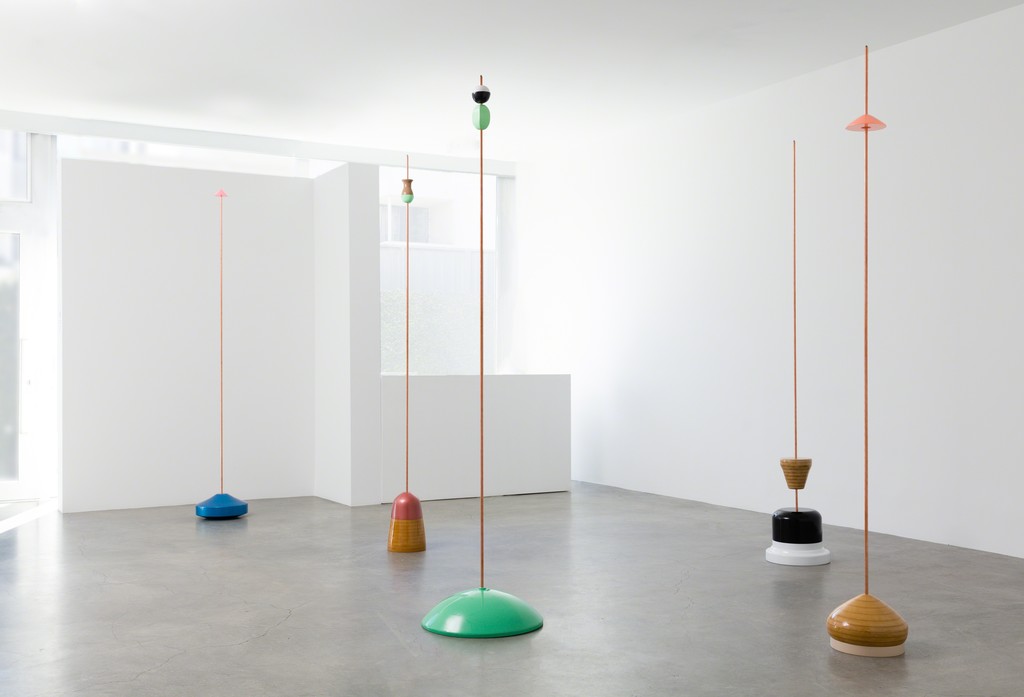 Shulamit Nazarian is pleased to present "As Above, So Below", a solo exhibition of new sculptures by Brooklyn-based artist Reuven Israel, marking the artist’s first solo presentation in Los Angeles.

In this new body of work, Israel continues his sculptural practice that directly engages with form and color, drawing from myriad cultural references that range from religious monuments to science fiction. These sources amalgamate into autonomous abstract sculptures that simultaneously feel familiar––due to the employment of a rich range of signifiers––yet unhinged to any particular context.

The sculptures activate two spatial planes, with components that anchor the ground and others that are suspended in the air. A thin, bare copper rod, originally designed for grounding electricity, serves as a connector for each form. Each piece is meticulously constructed and painted and correspondingly titled to reference colloquial phrases and descriptors for birds or snakes: "Yellow Belly", "White Collar", "Red Neck", "Black-and-Blue", etc. The title "As Above, So Below" is both a reference to the physical construction of the sculptures, with components existing on multiple planes, as well as to the relationship between humanity and the cosmos.

While they appear to be industrially fabricated, the sculptures are actually the result of a painstaking process that involves hand-cutting, gluing, laminating, and sanding medium density fibreboard (MDF) that is then coated with industrial paints and lacquers. The resulting sculptures play a game of visual deception as the handmade simulates that which is industrially fabricated: Wood disguises itself as metal and plastic, and sculpture takes the form of a seemingly utilitarian object.

Operating within the art historical lineage of Minimalism and Pop Art, but unwilling to be fixed to a particular time or place, Israel’s sculptures lend themselves to a range of associations. The works in "As Above, So Below" freely allude to industrial objects such as spacecraft, antennas, skyscrapers, and flag poles, and also to ritualized structures and objects of the past—temples, pottery, instruments, and weapons.

This visual conundrum inherent in these cultural references empowers the sculptures with a degree of mystery, ritual, and ceremony. While their specific origin or purpose may be unknown, the objects are embedded with a quiet monumentality as they rise up from the ground and nod to the past, present, and future.