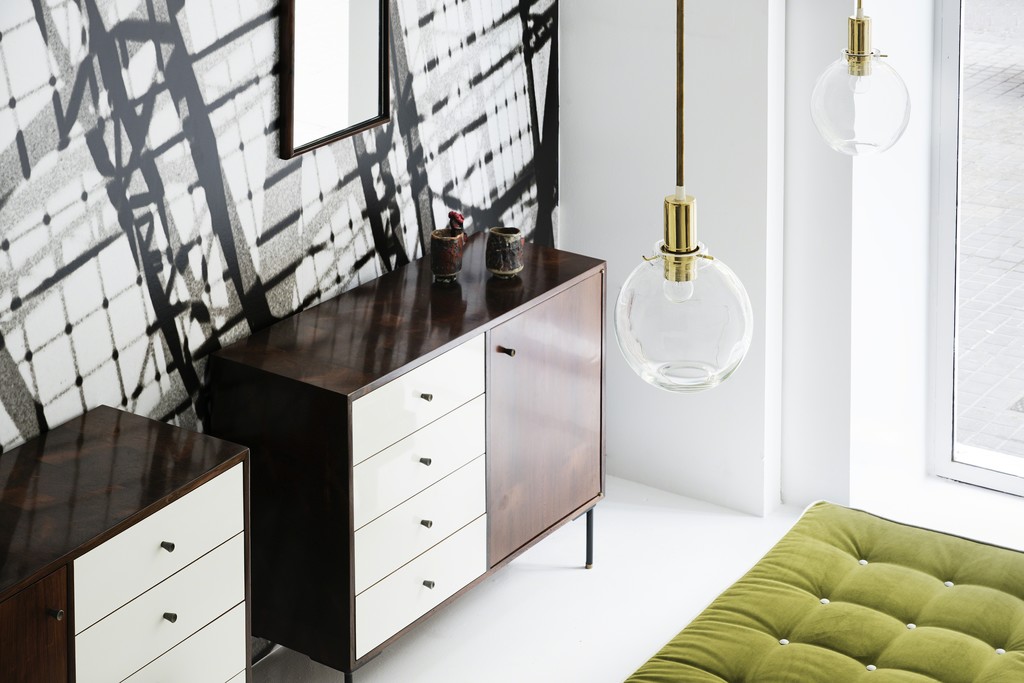 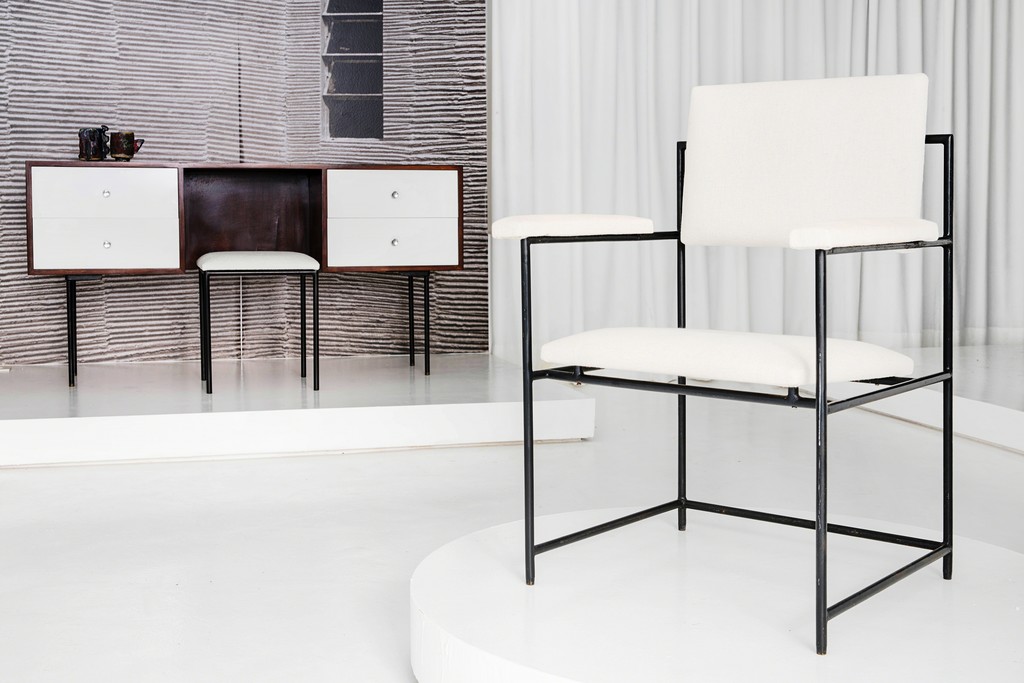 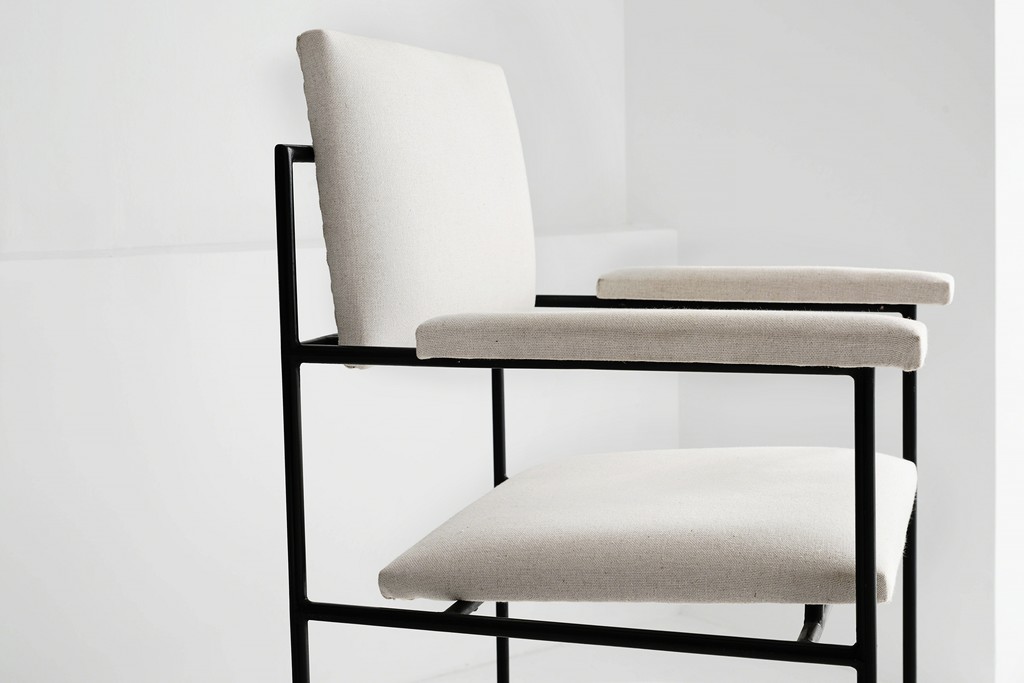 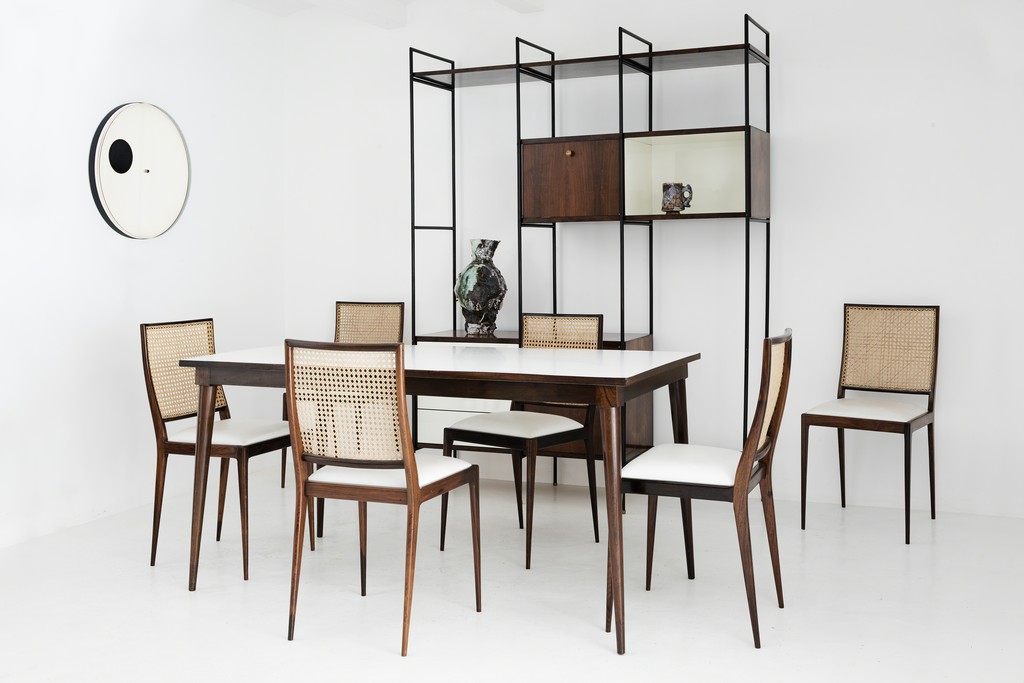 Side Gallery is thrilled to present UNILABOR, the intellectual collective co-founded by Geraldo de Barros. Multidisciplinary artist and entrepreneur, De Barros started his career in the painting field, although he gained his greatest achievements in the experimental photography, becoming one of the pioneers of the photographic abstraction and the main references of Concretism art in the Brazilian Avant-garde. De Barros was a seeker and an idealistic; finally, in the project of UNILABOR he meets in one project all the paradigms and values where to apply his designing ideas and esthetic values.
This utopia project started to be materialized in the Barrio Alto do Ipiranga in the periphery of Sao Paulo, with a community of artists, workers and intellectuals, reunited by the fray Joao Batista Pereira, who was the co-founder of UNILABOR with Gerlaldo De Barros. The purpose of this self- managed- working community, was to create a new model of a factory, were the workers had the control of the factory and the main role on it. Based on the education of the workers, the implementation of cultural actions during the working hours and, thanks to De barros, who added the estetic vision and design to release this project.
In one hand, UNILABOR was about to recreate the paradigm of the worker, and eliminate the hard conditions in the factories in Brazil. Due to this necessity, they must develop all
the intellectual and spiritual values for the workers. For this reason, they started building a process to eliminate the alienation, very ingrained in the Brazilian Industrial factories. UNILABOR started to cultivate the knowledge of the workers, with an enrichment full education about the artistic process of the patterns, not just materialistic, but moral, about the theories and concepts about design.
In the beginning, UNILABOR, was known as the Community of the Working Christ, because before becoming a factory UNILABOR was a chapel. This transformation process, lived very different moments belonged to a different compositions, due to the diverse perspectives of the projects and ideologies of the members of UNILABOR. However, the catholic matrix has always being very important, originated by the movement Economics and Humanism; created by Louis-Joseph Lebret, in 1941, during the Nazi occupation in France. This movement was resulted by the progressive’s French movements against the laicism of the State arisen in the middle of the XX Century.
Economy and Humanism, was and still is the root of the movement TERCERA VÍA an action from the state to limit and restrict the actions for the Industrial society, but also without forgetting the individual freedom. The idea was to build strategic plans, with human character to push the creation of self-managed communities. In this specific period, UNILABOR was born in Brazil, and also Boimondau (1941-1972) in France. The concept of community was provide like a way for social transformation where important intellectuals where reunited, both in Europe and in Latin American countries. Starting on this assumption the fray Joao Baptista, start looking for partners, and he found a in the most varied social sectors. From artist, working Catholics, members of the Communist Brazilian party, Trotskyites and also members of the Brazilian bourgeoisie.
The second driving force of UNILABOR was esthetic based on the standards of the Concretist Art, the Brazilian vector of the Constructivism. In 1952 De Barros joined this unique project in which modernization was emerging from below, adding to the project his notions of design and his paradigm of beauty. The design program of De Barros was based on the Concretism, movement that fit UNILABOR, in the point where both converge in the understanding of perception and awareness in the atmosphere of the factory, where all the pieces were created. De Barros could finally implement his silent but powerful ideas, connecting the material and the human with the design, materialized in every piece of furniture. This unique opportunity allows him to participate in a Project in which modernization was to emerge from below.
In the pieces from UNILABOR collected on this space, we can appreciate his good- form experience, his ideas of lines and modelling, not limited to the restricted space. The designs of UNILABOR have a very high conceptual value, highlighted by the photographs that De Barros took of his chairs, in which the multiple exposures of his camera reveal their nature as freestanding conceptual objects in space. The furniture appears to be sustained by the space that surrounds it, rather that attached to the ground and standing firm its own structure. They emerge from space rather than using it.
When
Opening on Tuesday 17th of April from 5.30 to 8.30 From Friday 20th of April to Friday 20th of July 2018
Where
SIDE GALLERY
Carrer d ́Enric Granados 80, Barcelona, 08008, Spain