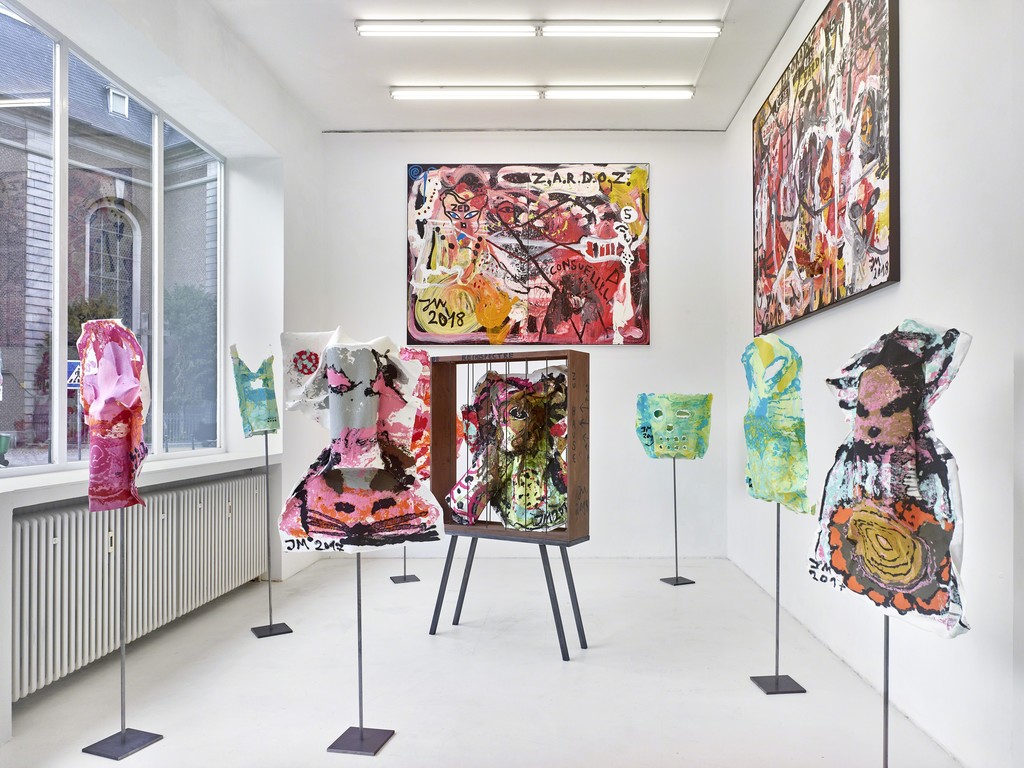 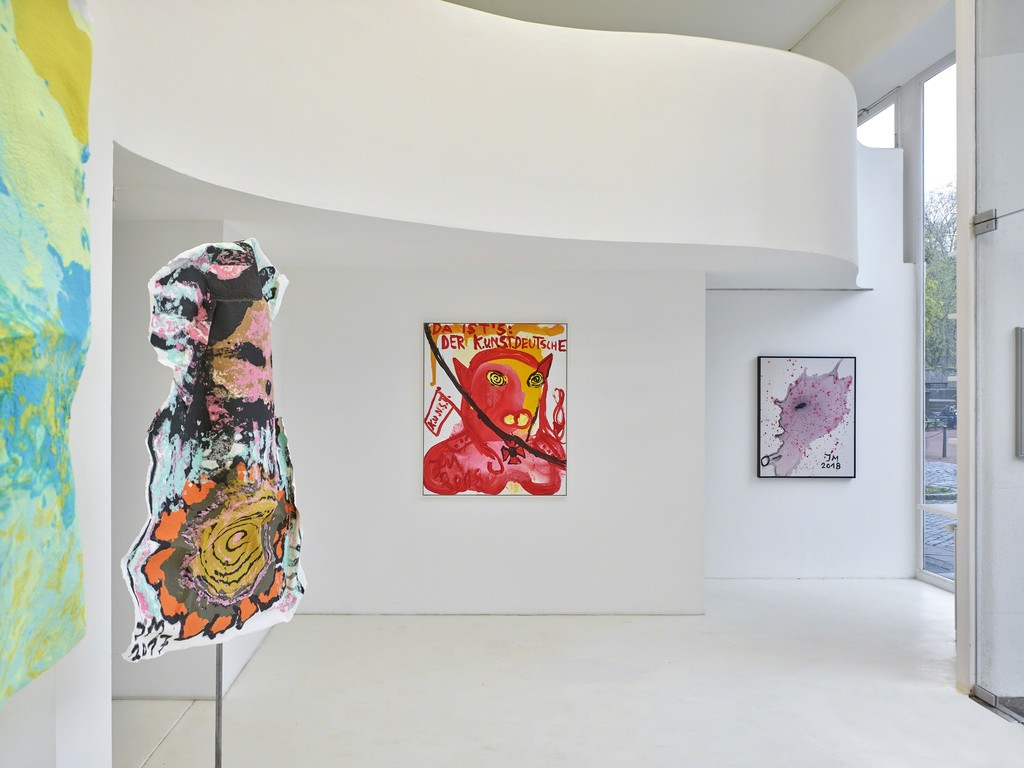 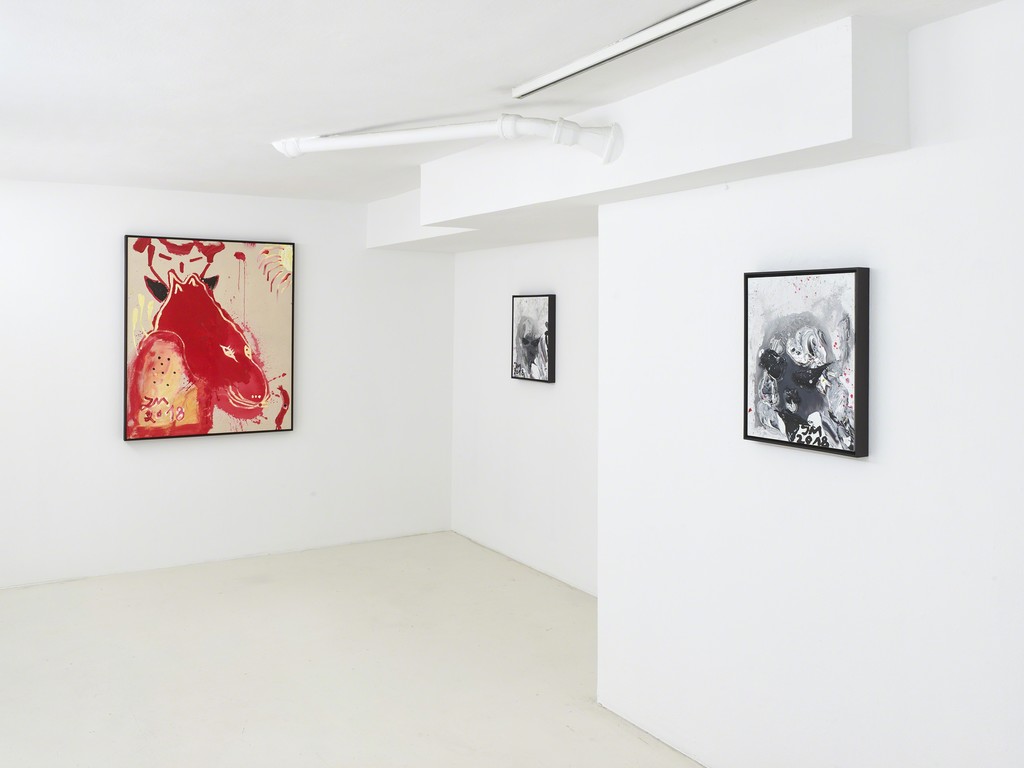 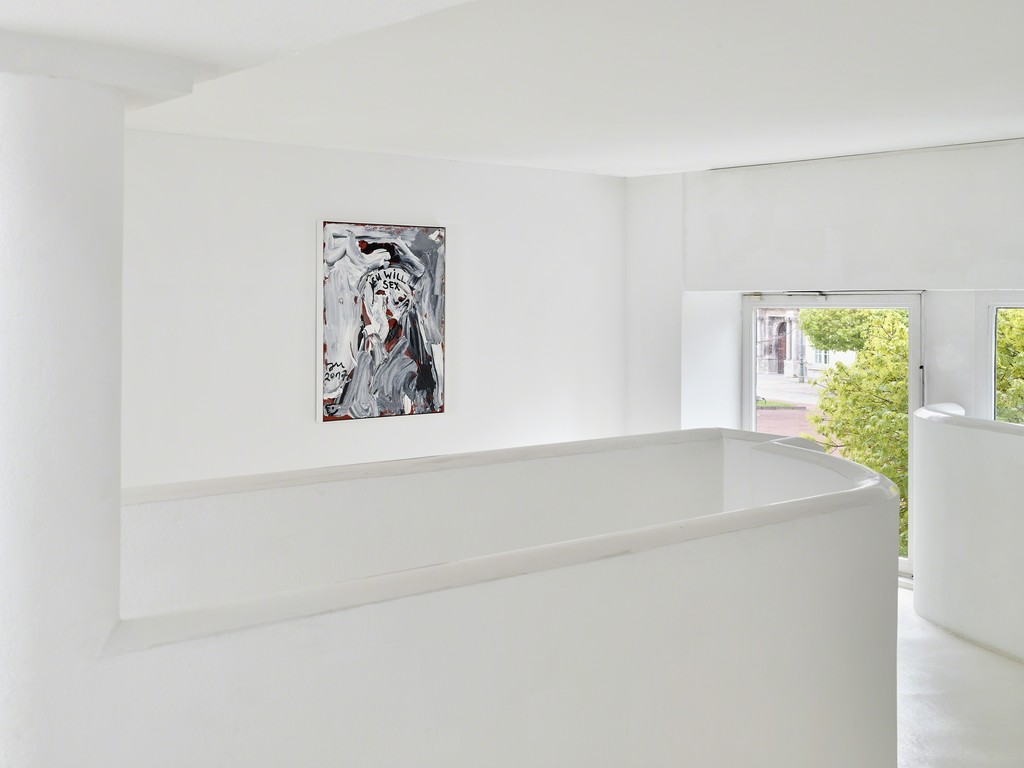 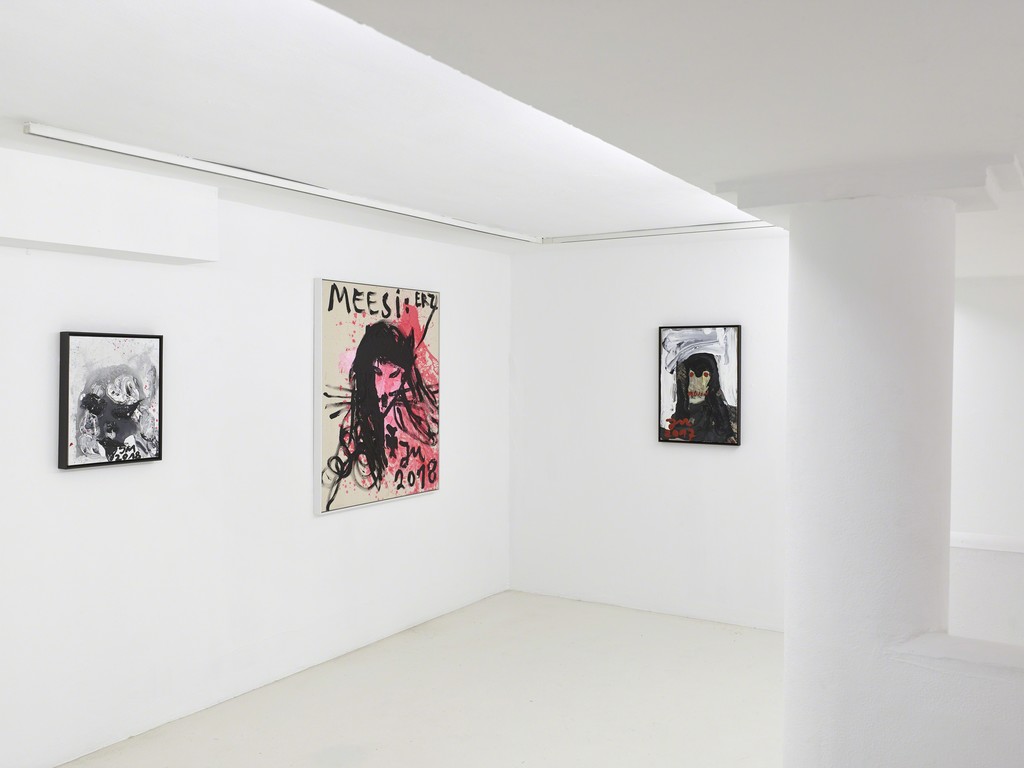 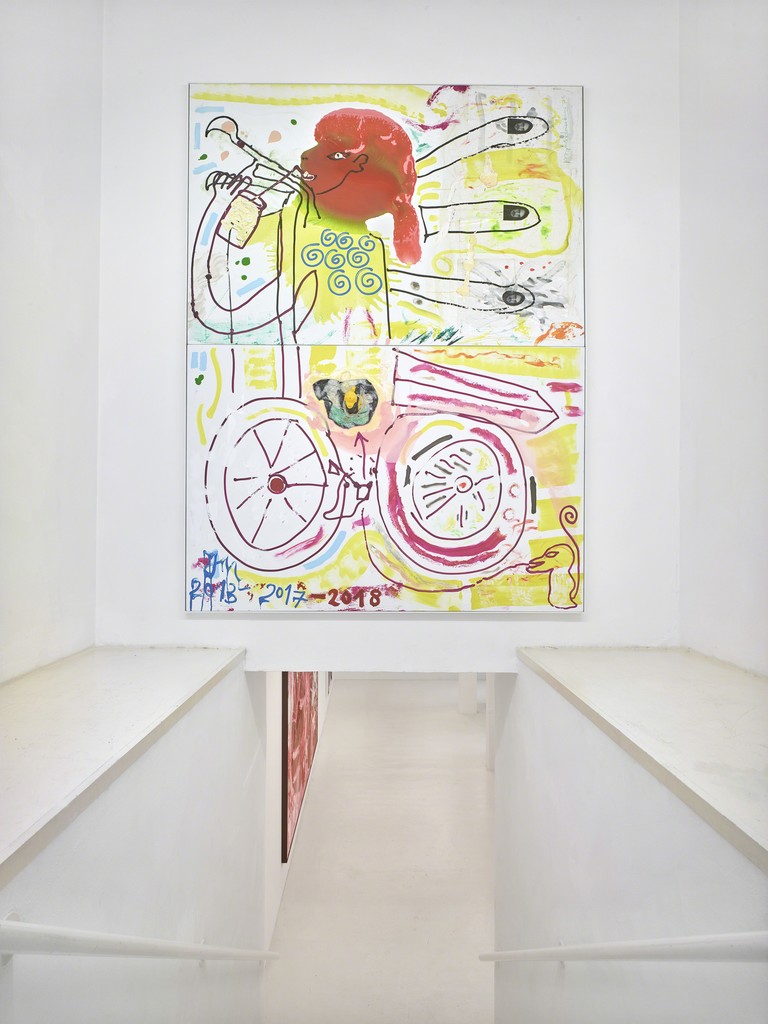 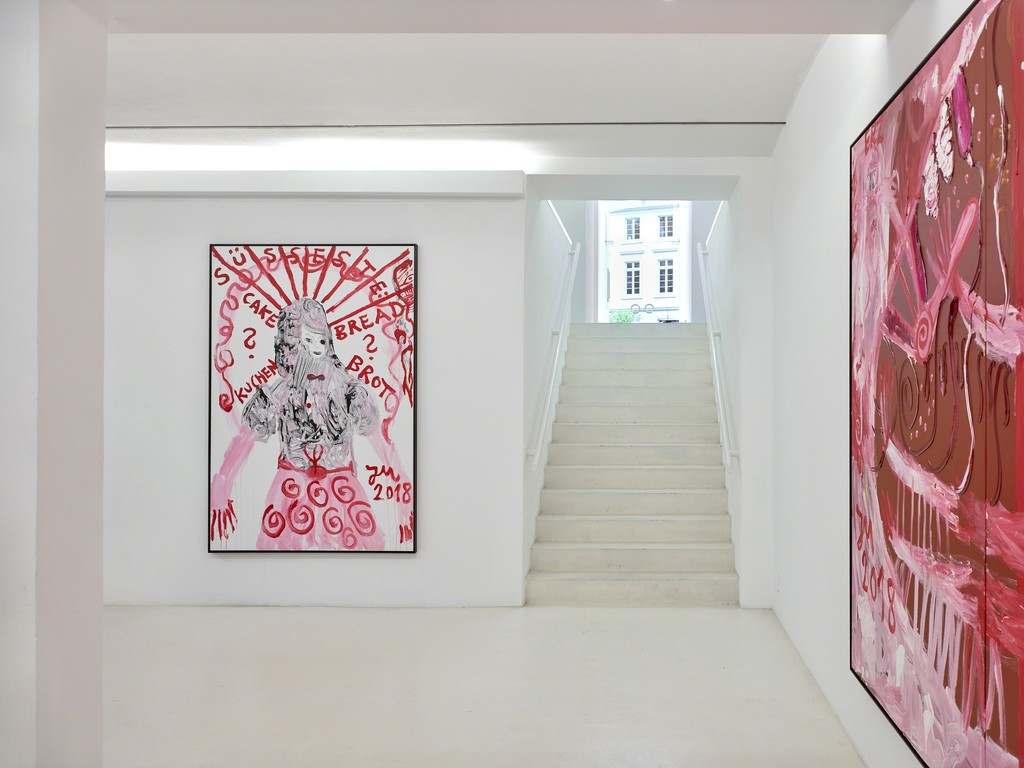 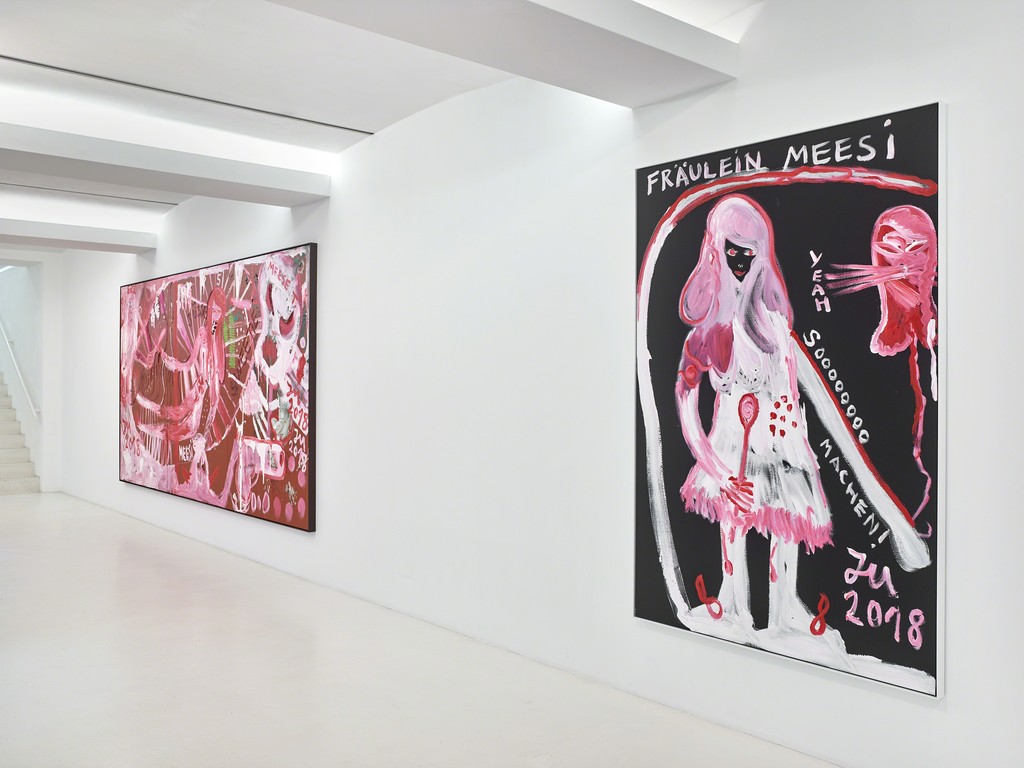 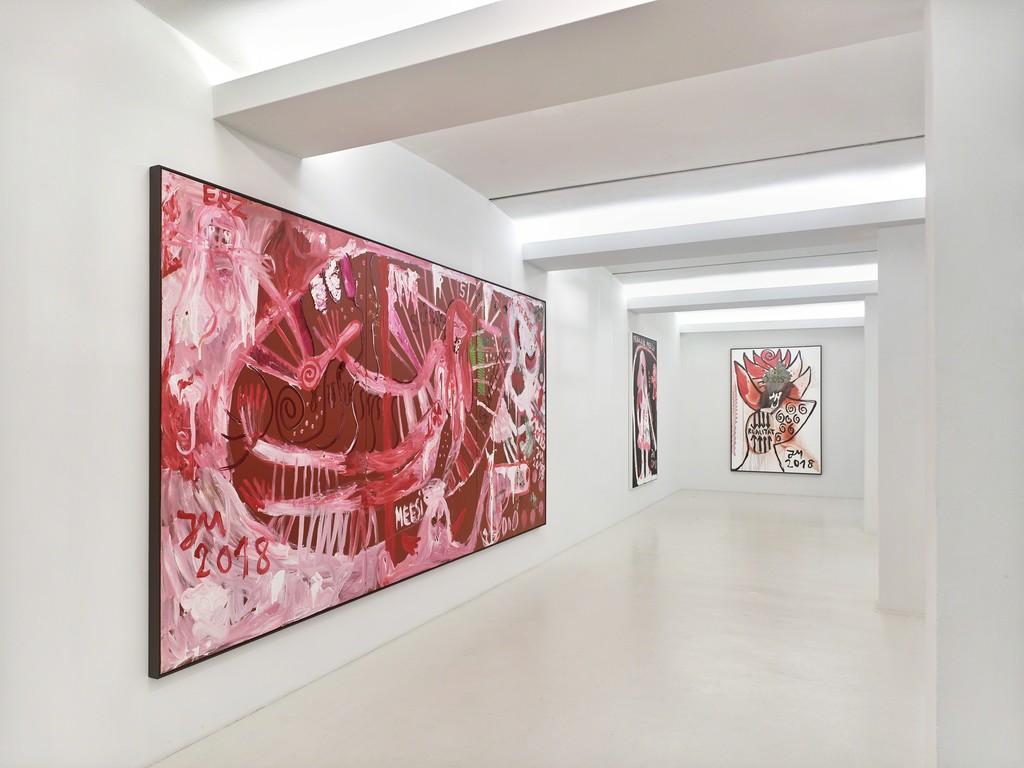 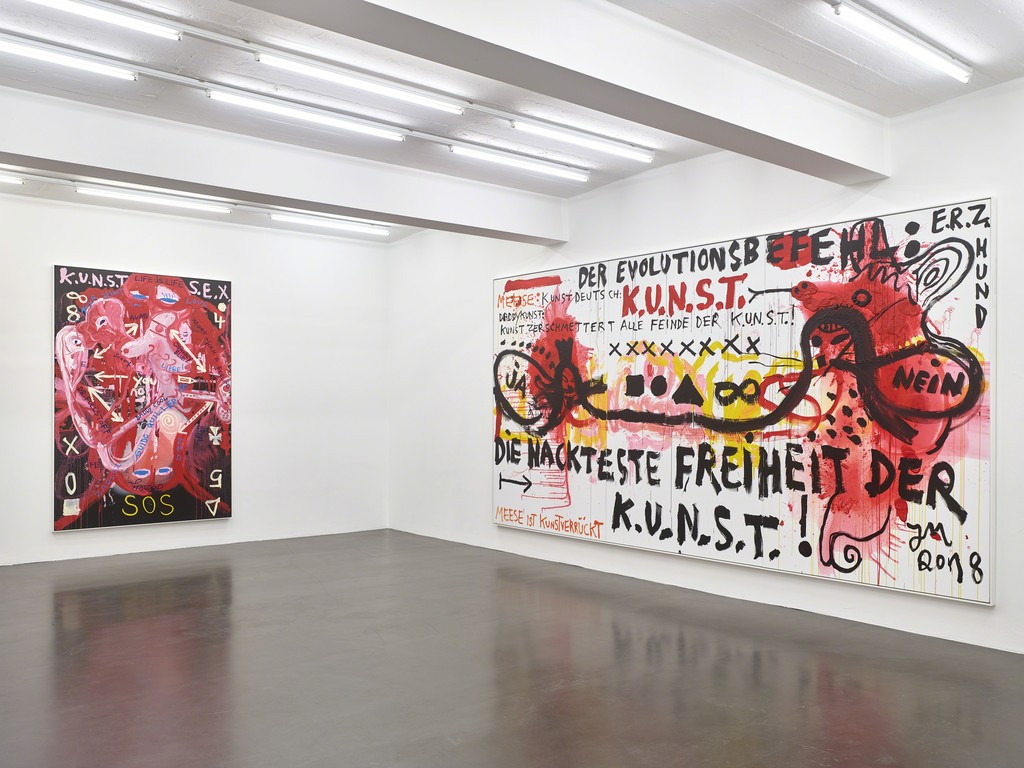 In the framework of his exhibition DIE NACKTESTE FREIHEIT DER KUNST (The Most Naked Freedom of Art) from April 14–May 12, 2018 at Sies + Höke, Jonathan Meese presents 21 paintings fresh from the studio in very different formats. Especially notable are eight so-called “pulp paintings” in the form of masks created using handmade paper, which is dyed with pigment when still wet, thus taking on a special luminescence. The extensive exhibition also includes drawings and collages.

For this exhibition the artist, born in Tokyo in 1970, has used for the first time canvases without any primer—quite literally “naked.” “The delicate aspect of his painting,” as his studio puts it, “can thus generate a different impact while at the same time, naturally, encountering something hard as well.” Shades of red, pink, yellow, and orange dominate the new paintings. A surprising gentleness and a sometimes almost “girlish” figuration are characteristic of a great deal of Jonathan Meese’s recent pictorial production. The textual messages so typical of his works, sometimes ironic, sometimes brutal, now appear in a new light. In any case, the artist seems to have discovered his feminine side. For example, we encounter a “FRÄULEIN MESSI” wearing a white dress painted on a black backdrop. In her hand, she holds an attribute with a clearly female connotation, but it remains unclear whether it is a mirror, a cooking spoon, or a huge lollipop.

A “FRÄULEINANNY“ in turn wears a princess crown, along with cat-like mustache whiskers, an armband to show she is blind, and the Iron Cross. In other pictures, DER K.U.N.S.T.BENGEL (the A.R.T.RASCAL) breaks out—the motto on the invitation: for example, when a skull face in gray on gray reminiscent of Edvard Munch’s The Scream announces “I want sex” with a forehead tattoo.

In a video message from March 18, 2018, produced at his Berlin studio, which he calls his Erzhauptquartier (archheadquarters), Jonathan Meese announced the beginning of a new period of work. As the background for this memorable manifesto, that was proclaimed in the presence of Brigitte Meese, his mother, close confidant and occasional inspiration, he chose the large-format panel painting DAS GEILSTE PROGRAMMATISCHSTE WERK DE KUNST OHNE DE KÜNSCHTLER (Sieht doch Jeder) (THE COOLEST, MOST PRORGAMMATIC WORK OF ART WITHOUT THE ARTIST (AS ANYONE CAN SEE)), the completion of which can be witnessed directly in the video.

The manifesto begins with the programmatic words “Die nackteste Freiheit der Kunst” (The Most Naked Freedom of Art). And then it continues: “Art is total freedom. Art is the state of the future. Art stands above all else. Art is an order to evolve. Art is free of all ideology. Art disempowers all non-art. Art is total child’s play. Art is the most invincible power. Art is the boss. Art is number one.”

Jonathan Meese interprets the riotous, total painting of in his new works in the usual ironic manner: “The great thing about these paintings is that they have no taste. There’s nothing subtle lurking in these pictures. It’s like a mixed grill plate: it’s just there.” His goal is to create paintings with content, that are not just form, not just design. In the process, Jonathan Meese seems himself as a political person: “Art is the most unelectable power,” he says. “I don’t want to illustrate this period with my art, but to show the power that art has.”