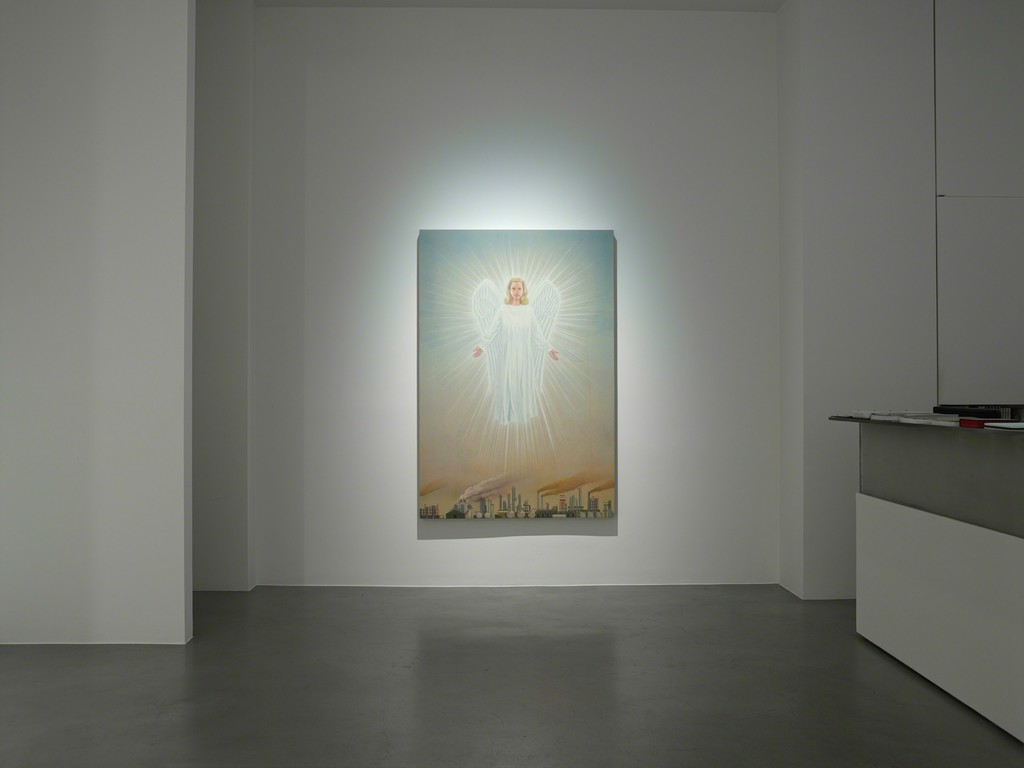 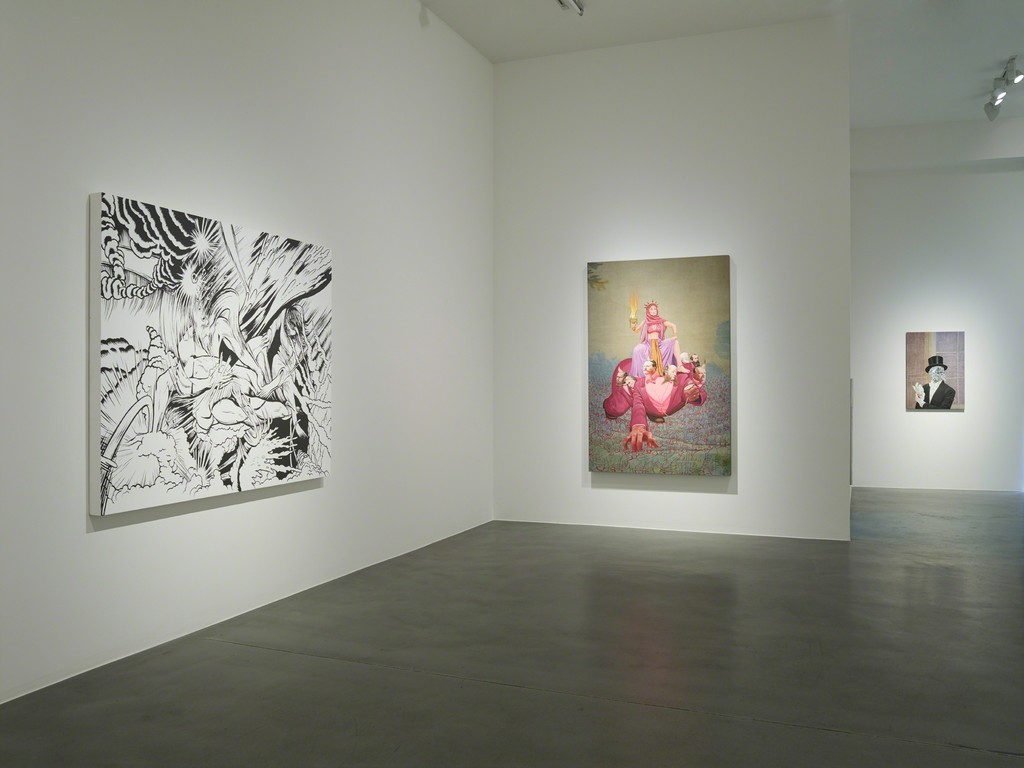 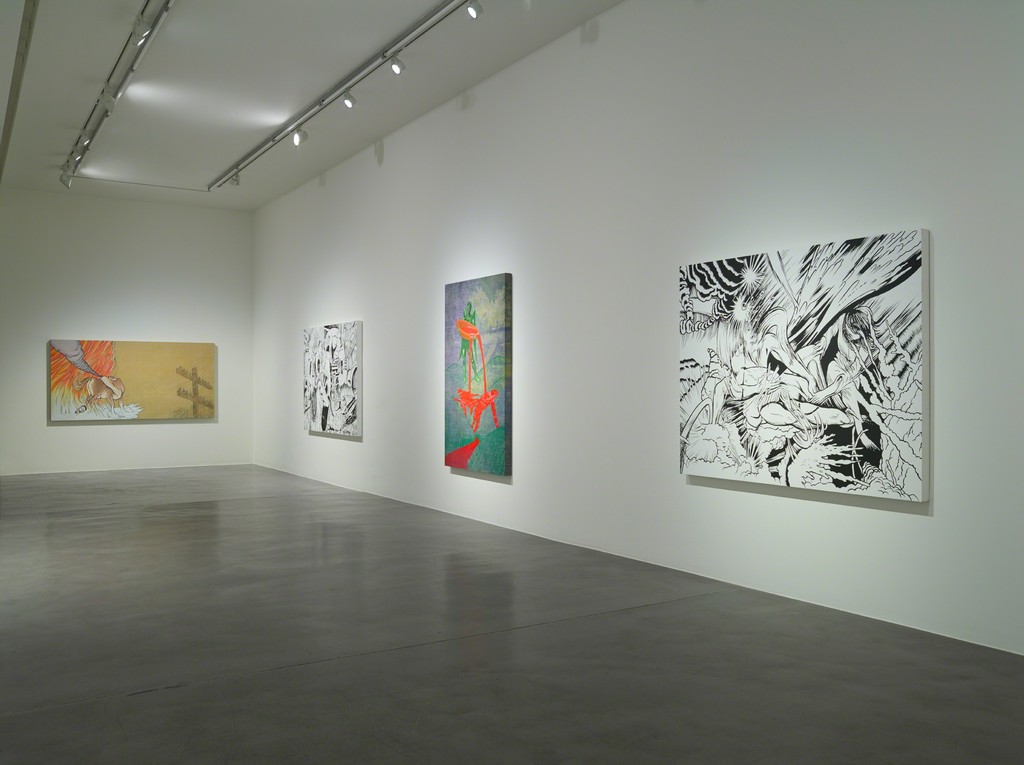 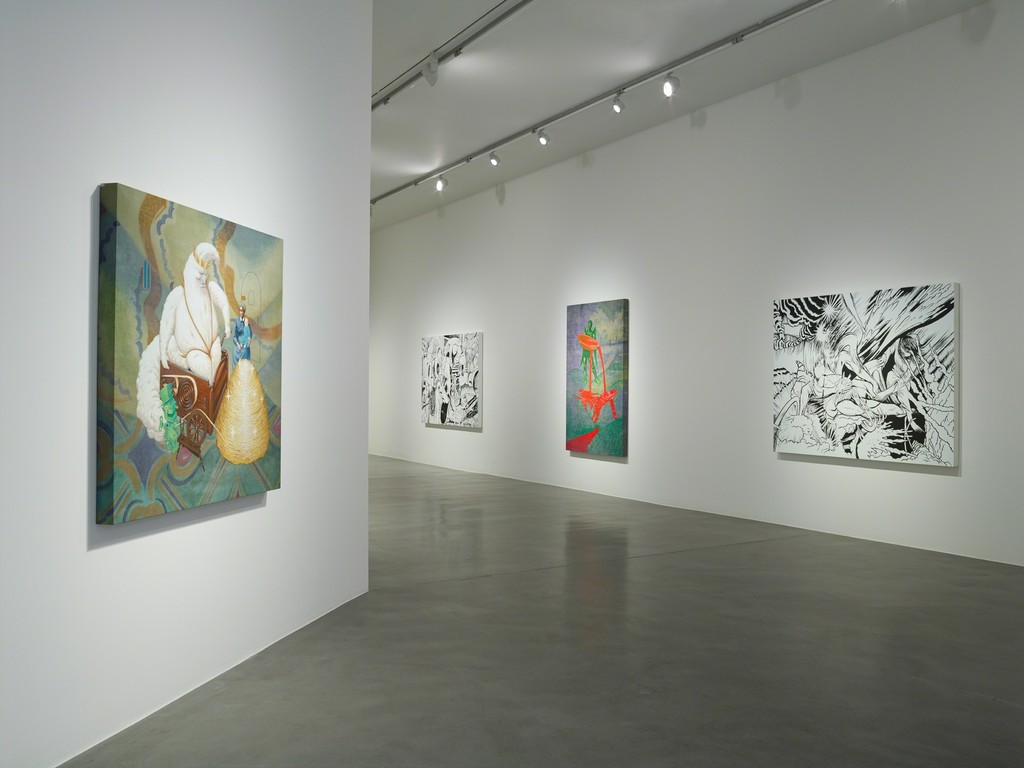 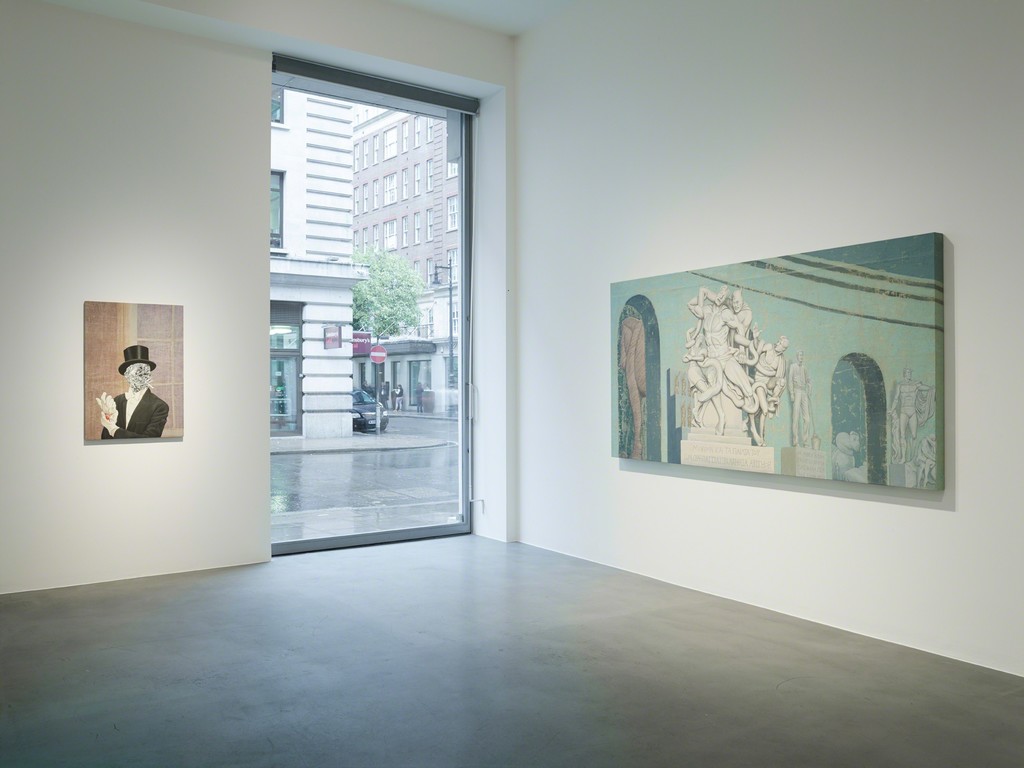 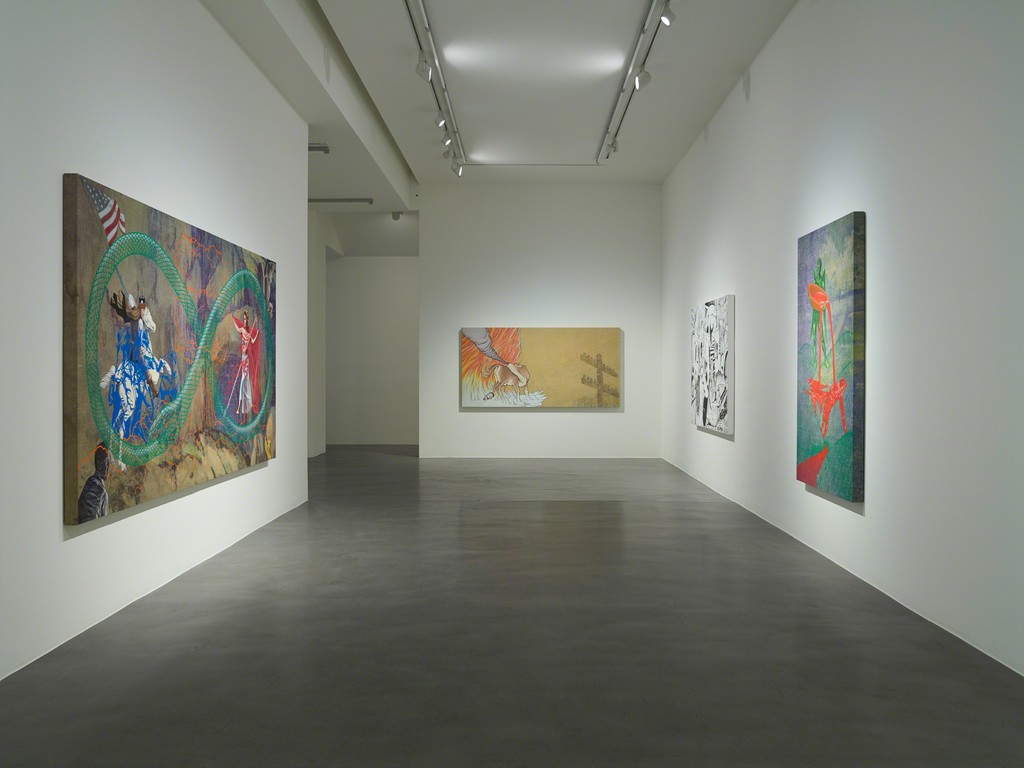 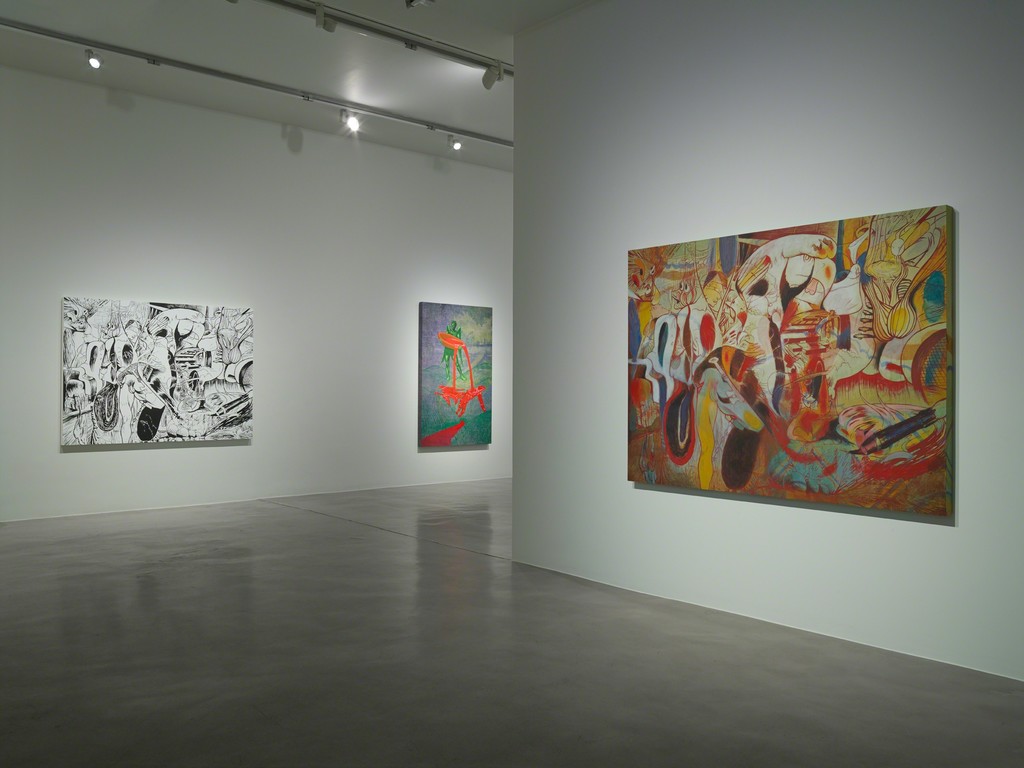 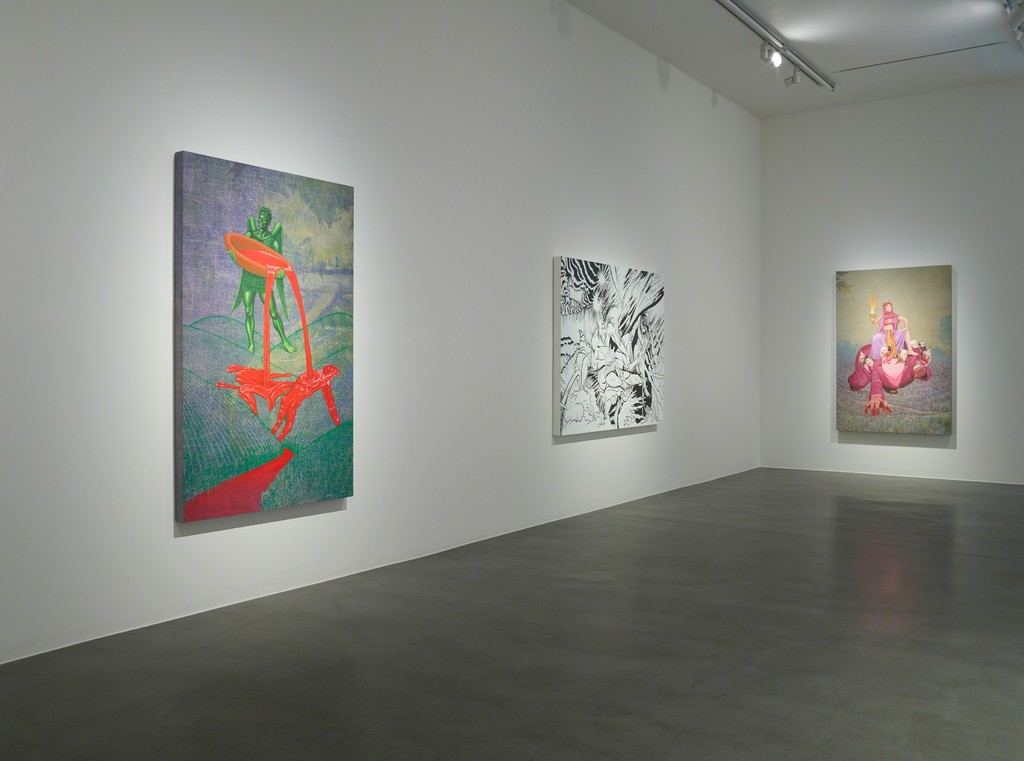 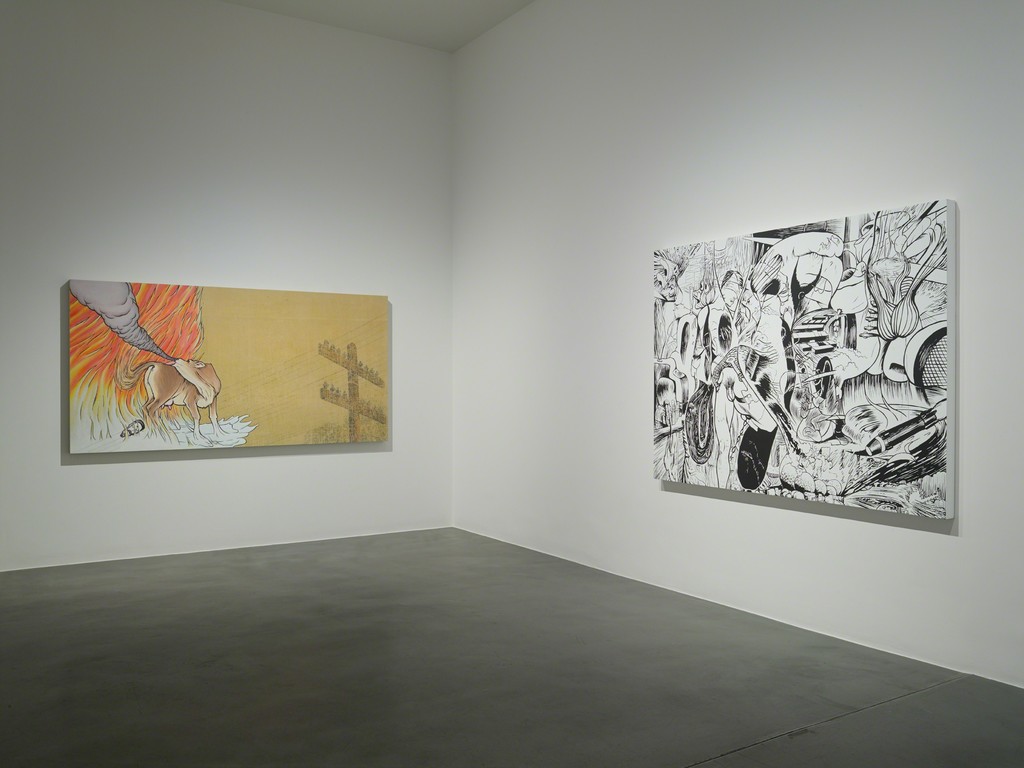 Simon Lee Gallery is proud to present an exhibition of new paintings (all 2015) by Los Angeles based artist Jim Shaw.

Like the monumental backdrop paintings first shown in the exhibition 'Left Behind' in 2010 at CAPC, Bordeaux, these new works are painted over used theatrical scenic backdrops bought by the artist. Now cut down and stretched, these readymade canvases are typically from the 1940s and 1950s, and carry with them a sense of the history of that time. That sense of the past is combined with the imagery Shaw uses for the works - from late 19th century political cartoons to DC comics, 1970s album covers, Hollywood films and detective novels indicating a past which haunts the present and different vernaculars which co- exist within the same frame.

These new works reflect Shaw's rigorous research processes and systematic interrogation of cultural detritus. He employs strategies of the absurd to bring into sharp focus themes such as slavery and corruption, deftly revealing the underbelly of society whilst commenting on the construction of individual and collective identity.

One of the works in the exhibition, King Cotton, draws on the Rumpelstiltskin fable in a commentary on slavery, machines, and the cotton trade. The green mechanical elf featured in the foreground is based on a vintage toy owned by the artist called 'Mr. Machine', and in relationship to the turd-like spun gold created by the king, reminds us of the cycles of life, history repeating itself and the potential dangers inherent in the pursuit of personal gain over collective good. Shaw calls into question the desire for knowledge, the creative process, fiscal wealth and power.

Other paintings further develop Shaw's investigation into allegories, myths, conspiracy theories, faith and belief systems. Whore of Babylon & Robber Barons depicts the Book of Revelations beast composed of notorious 19th Century American merchants atop a sea of 1960s political conventioneers. The whore holds a torch aloft and sports a crown, referencing French sculptor and Mason August Bartholdi, who designed the Statue of Liberty and was originally commissioned to build a giant Isis statue overlooking the Suez Canal. Shaw hints at false promises and swathing the protagonists in luscious pinks, vulva reds and funereal lilac, reiterates the inextricable link between sex and power. Sex, death, the perversity of leadership and the fractured self are also battled out in Wrestling with God: Moses (black and white), a composition which references both abstract expressionism and heroic mythological painting and is based on the Biblical story of Moses' return to Egypt, during which Yahweh attempts to murder him for not having circumcised his son.

Narratives from the artist’s ongoing development of the fictional religion ‘Oism’ weave in and out of the iconography of the works and connect them with his wider oeuvre. Popular folklore blames Mrs O’Leary’s Cow for starting the Great Chicago Fire of 1871, and this is also the moment in Oist history when its founder Annie O’Wooton loses control over the church. Intended as an apocalyptic painting, the cow is a demonic beast rising from the flames gleefully lapping its tongue and snorting smoke – a force of nature impossible to keep at bay.
Shaw's ongoing dialogue with art history also punctuates these new works: Prometheus: Liver is the Cock’s Comb (colour) references Gorky's 1944 Liver Is the Cock’s Comb and continues the theme of wrestling with God and shows Edward Snowden as Prometheus and the hollow fennel stalks in which he hid fire from Zeus. Referenced here too are Ad Reinhardt’s How To Look At Looking, Courbet’s Origin of the World and three different NSA intelligence-gathering elements: a Buzz Buzzard comic as a predator drone, warehouses where information is kept and rock-like formations on the ground used to collect audio data.

He currently has a major solo survey exhibition ‘The End is Here’ at The New Museum, NY which runs until 10 January 2016.