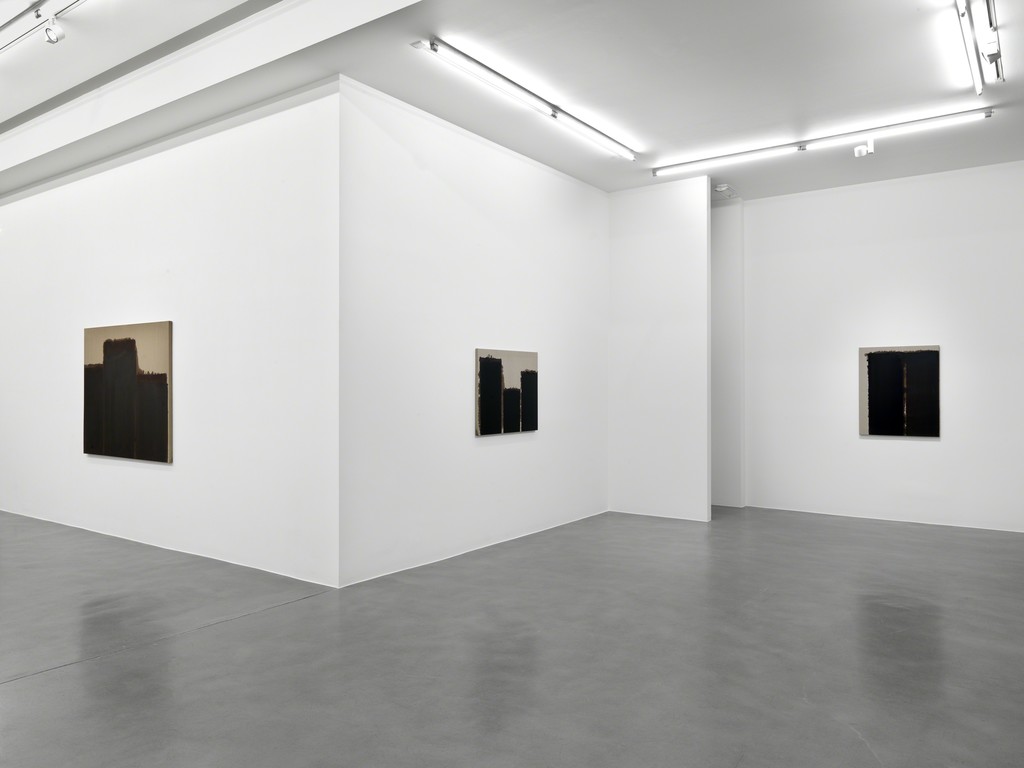 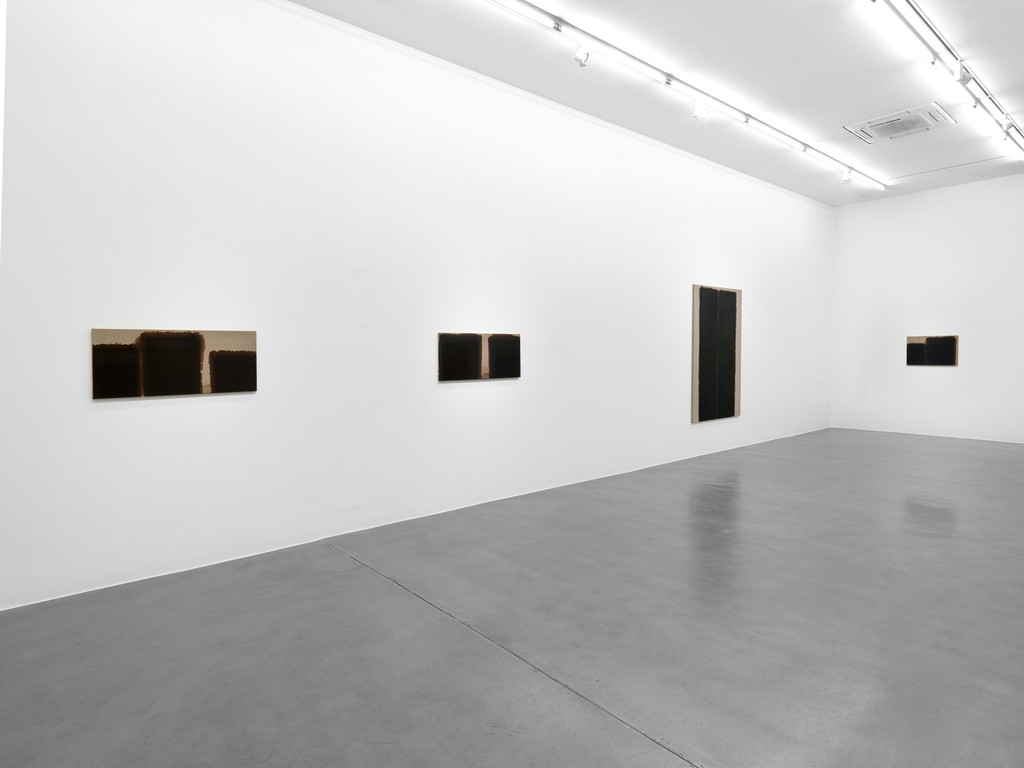 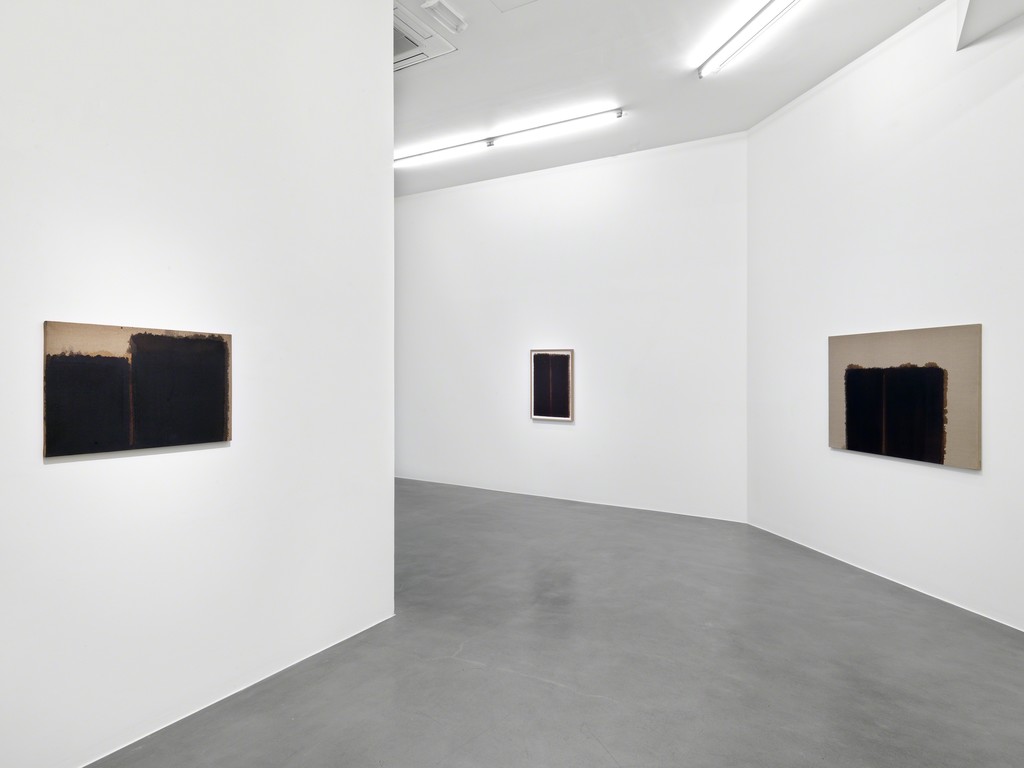 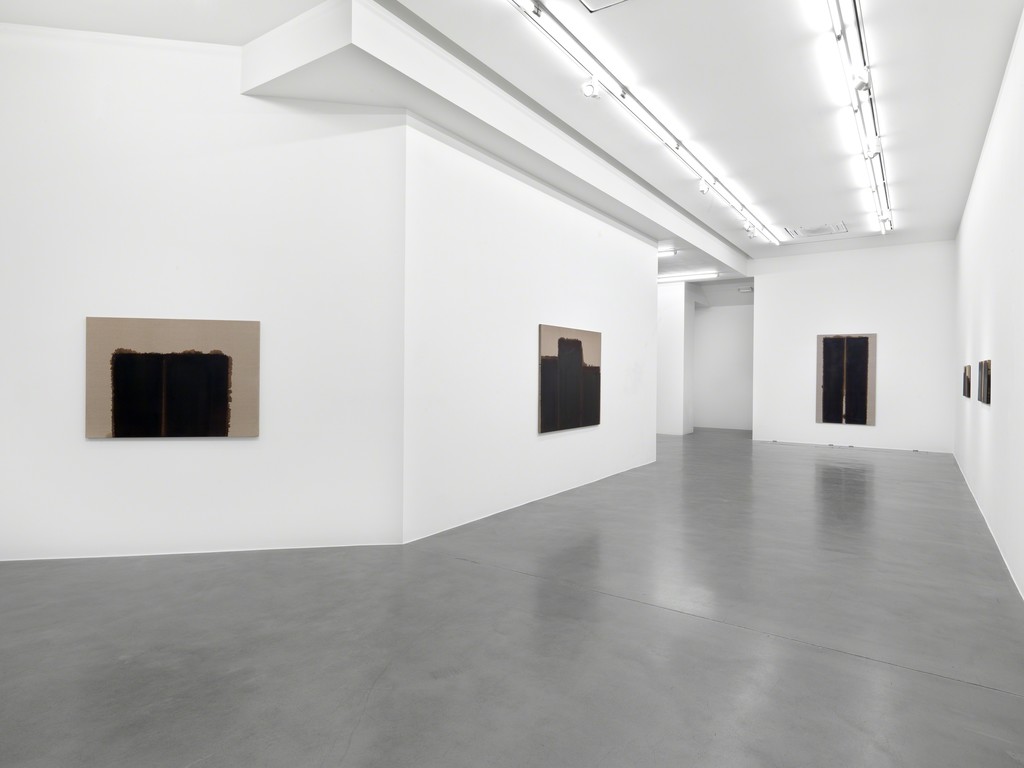 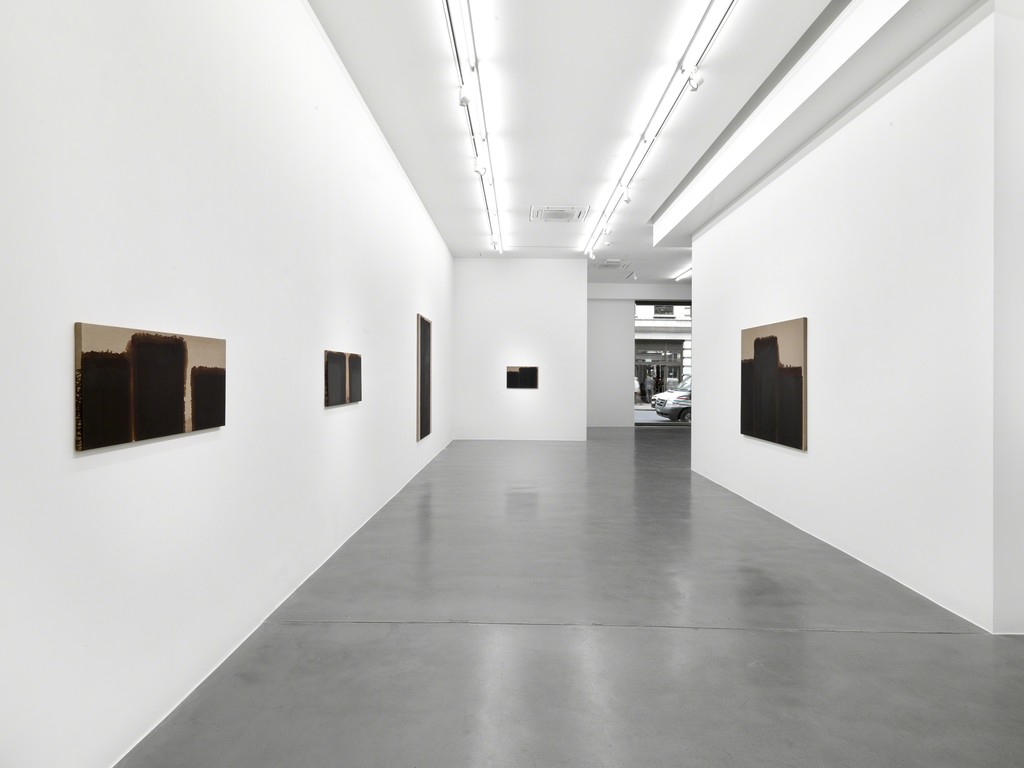 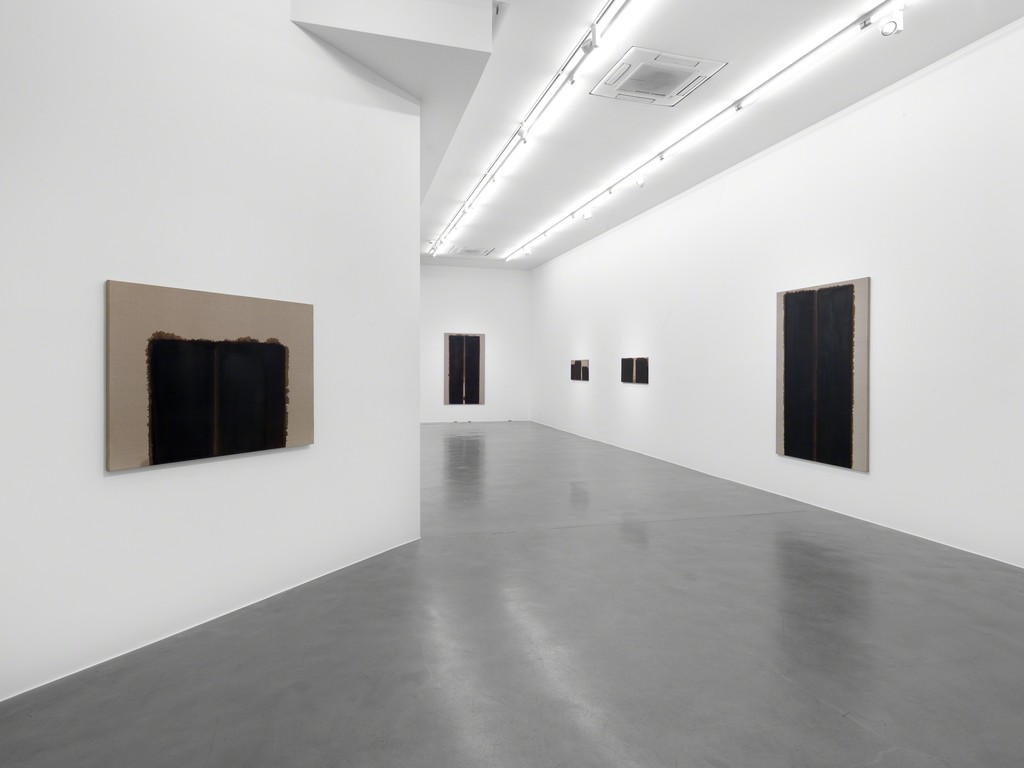 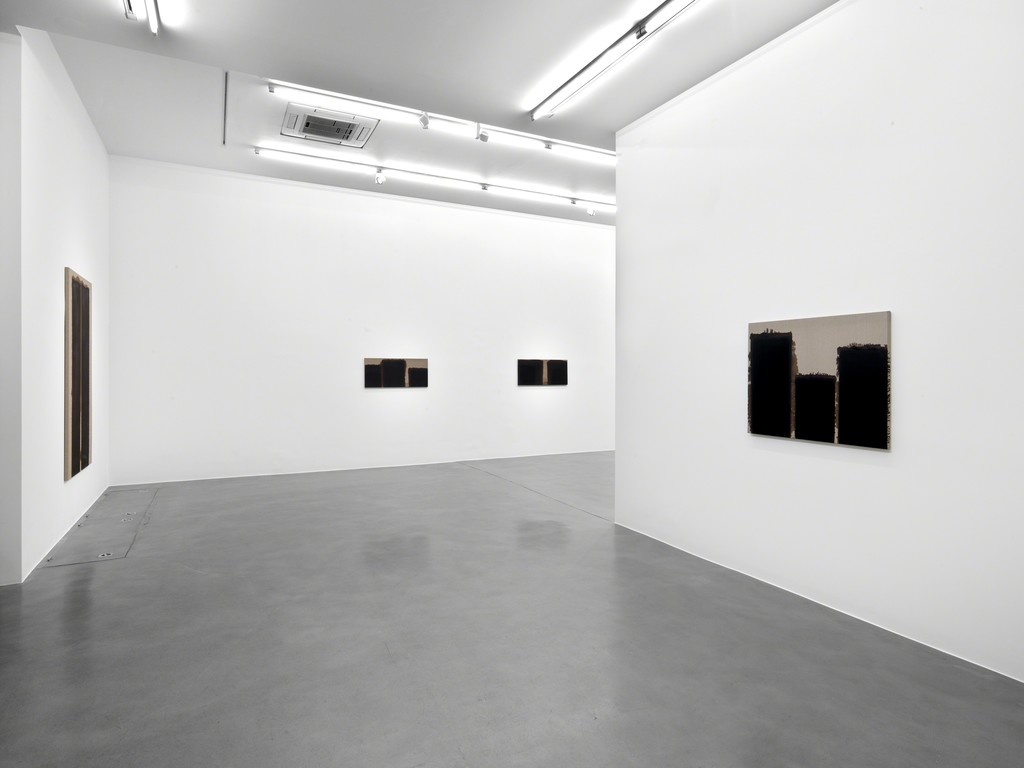 Simon Lee Gallery is proud to present a concise survey exhibition of paintings by Korean artist Yun Hyong-keun, one of the leading figures of Dansaekhwa, in his first posthumous solo presentation in the UK.

The series of large Burnt Umber & Ultramarine Blue oil on linen works included in the exhibition date from between 1990 – 1993 and reflect a transformative moment in the artist’s career, when the abstract forms in the work grew larger, darker and fewer in number.

Inspired by nature and influenced by the work of the scholar and calligrapher Kim Jeong-hui, Yun’s paintings combine the colour of earth and water in surfaces reminiscent of traditional ink-wash painting, infused with vitality. Restricting his palette in this body of work to these two colours, Yun diluted the paint with turpentine and allowed it to wash over the canvas, layering it over days, weeks or months to create intense fields of velvety, intense darkness. The paintings embody time through an accumulation of procedures enacted in different encounters with the work in the same space. Each layer of pigment seeped into the fibres at a different rate, resulting in blurred edges along the unmarked expanses of canvas. In the 1990s, these boundaries gradually became more defined, eventually sharpening into hard edges in the final decade of the artist’s life.

In recent years major international museums and academics have revisited Yun's work and his key contribution to Dansaekhwa. His works characterise the elements of tactility, spirituality and performance common to first generation Dansaekwha artists, including Chung Sang-Hwa, Ha Chong-Hyun, Chung Chang-Sup, KIM Whanki and Park Seo-Bo. Emerging from a period deeply affected by the Korean War, their work reflected Korean sentiments and aesthetics through investigating themes of flatness, materiality and mediation. Rhythmic actions repeatedly performed on the canvas were intended to build a sense of unity between materials, object and the self. Whilst never officially a movement and diverse in their outputs, the Dansaekwha artists’ work shares a common commitment to investigating the materiality and act of painting.

Yun Hyong-keun was born in Miwŏn, Korea, in 1928 and died in 2007. In 1947 he attended Seoul National University to study Western painting, but abandoned his studies after he was imprisoned for his involvement with the leftist student movement. He returned to his hometown, Cheongju, where he worked as a teacher. Eight months later, the Korean War (1950-53) broke out. Yun survived the war and in 1954 joined Hongik University where he met Kim Whanki, a renowned painter and his future father-in-law, and forged a close relationship with the art students who would be exponents of Dansaekhwa. He graduated from the Department of Painting, Hongik University, Seoul, in 1957. He has been the subject of numerous solo exhibitions in Korea, Japan, Germany, France and the United States, including at the Judd Foundation, New York (1993), and the Chinati Foundation, Marfa, TX (1994). The Museum of Modern and Contemporary Art, Strasbourg, France, held a major retrospective in 2002. His work has also been celebrated in landmark surveys such as Dansaekhwa: Korean Monochrome Painting, National Museum of Contemporary Art, Gwacheon (2012); Korean Abstract Art: 1958–2008, Seoul Museum of Art (2008); Gwangju Biennale (2000); Venice Biennale (1995); Working With Nature: Traditional Thought in Contemporary Art from Korea, Tate Liverpool (1992); and the São Paulo Biennial (1969, 1975).