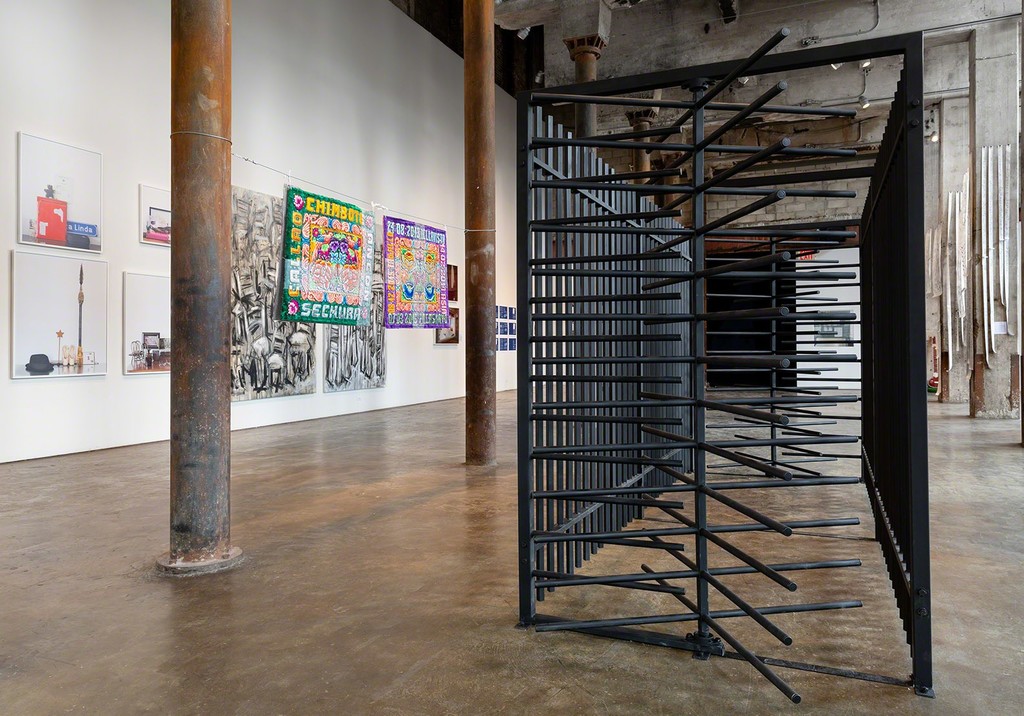 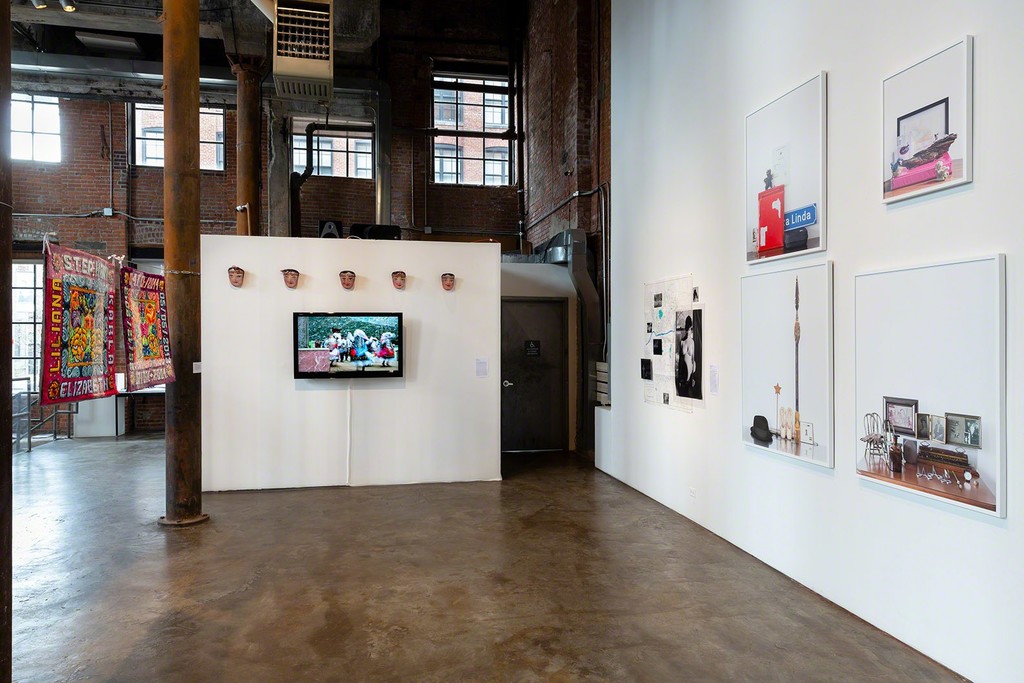 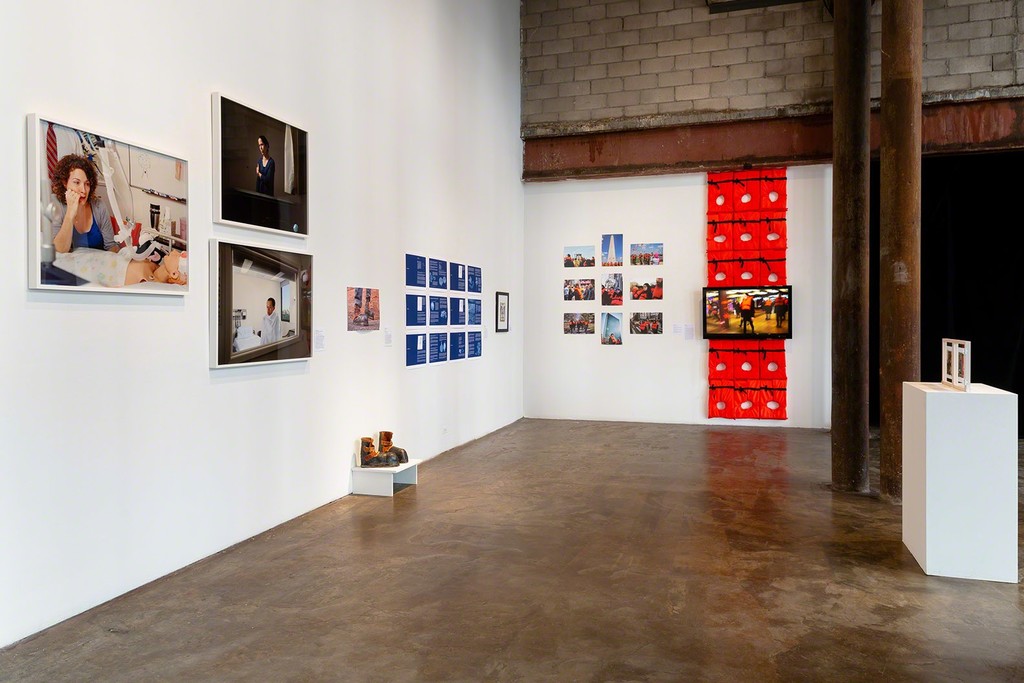 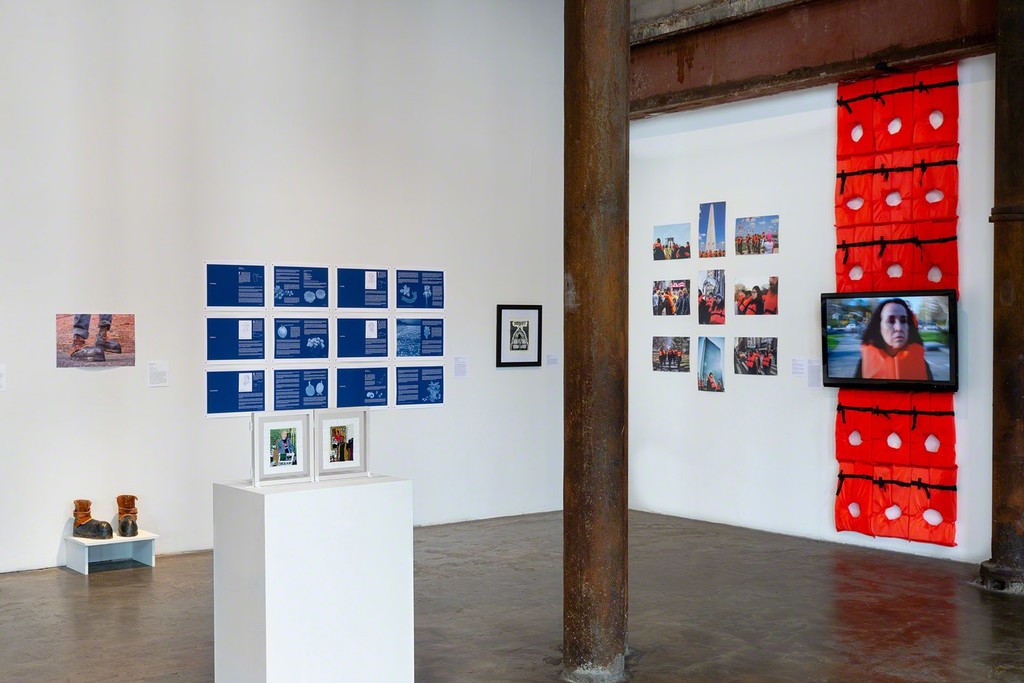 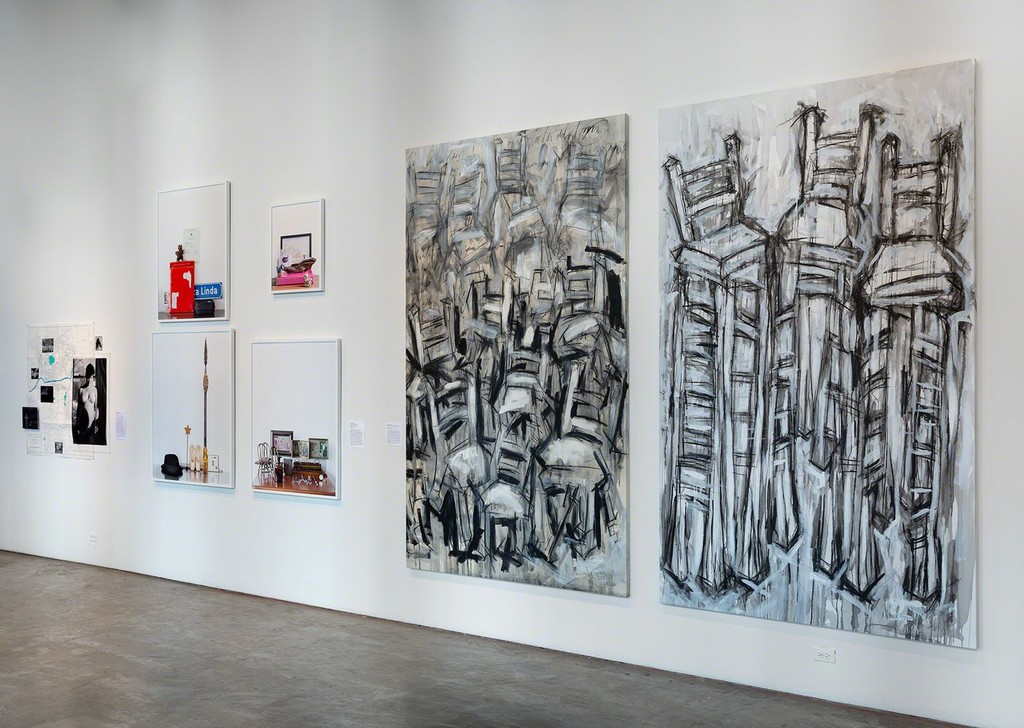 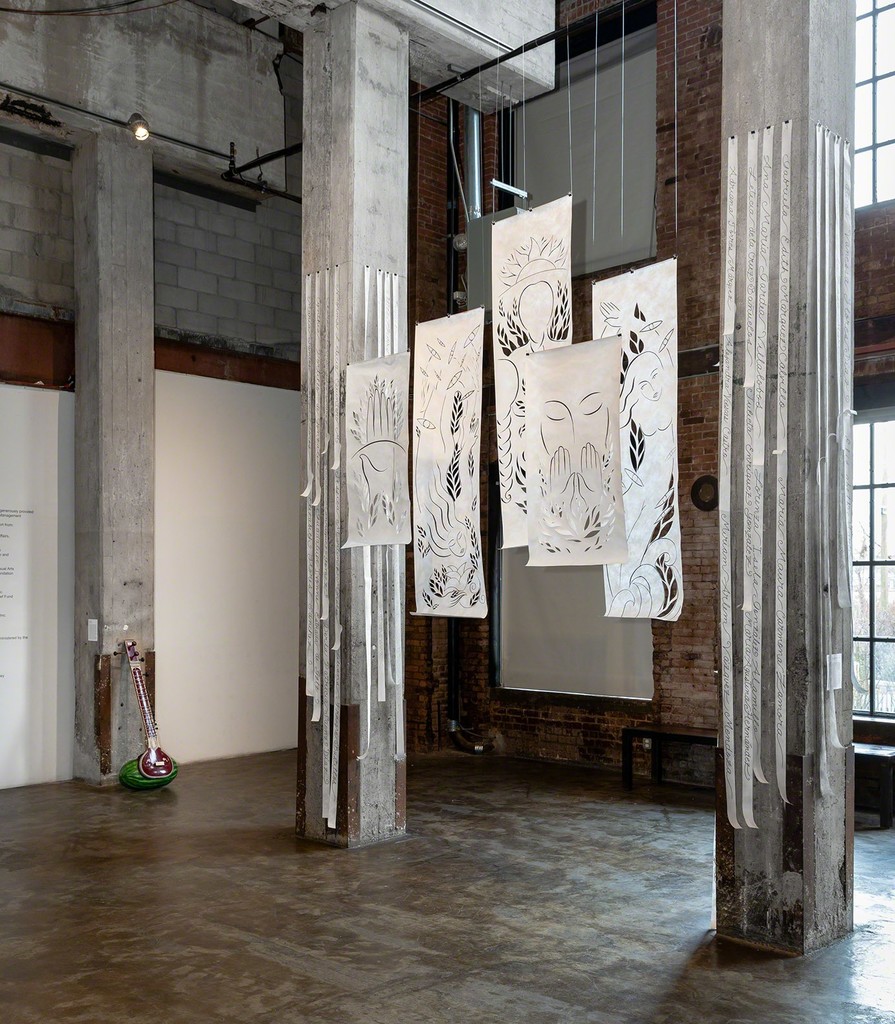 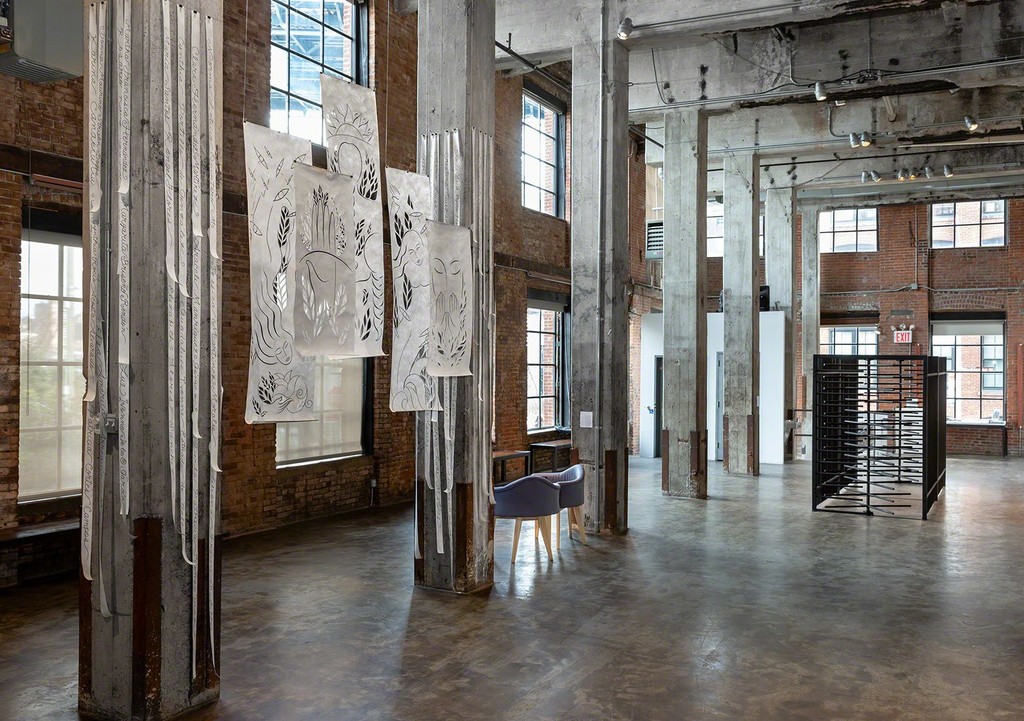 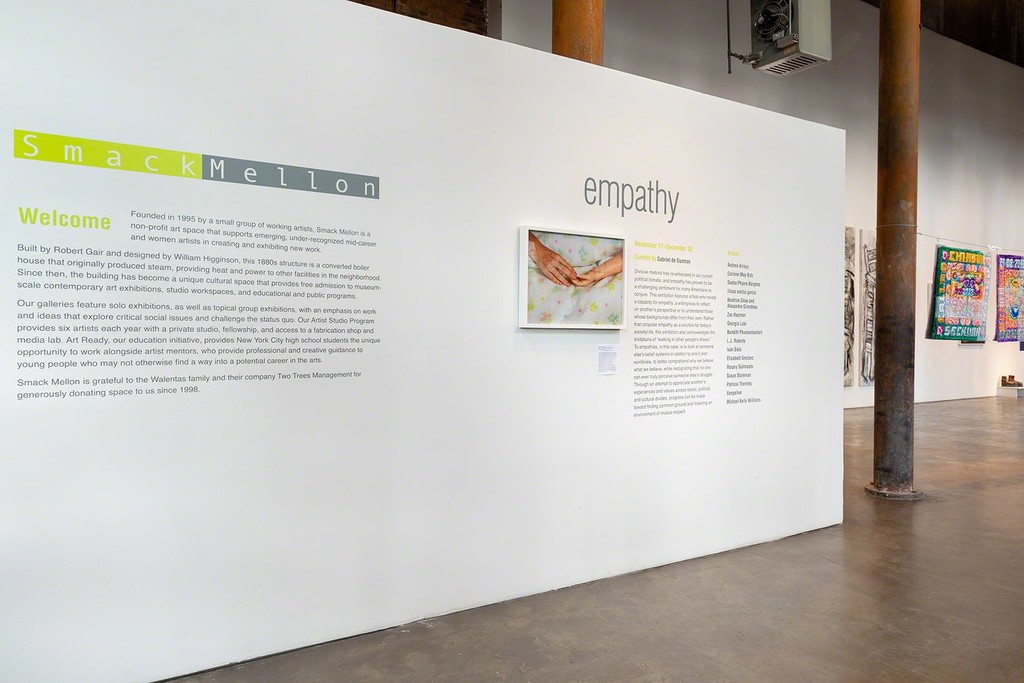 In an increasingly polarized political climate, empathy has proven to be a challenging emotion to conjure for many Americans. Both the public and its leaders seem to show little interest in understanding the viewpoints and experiences of others across the divide. The disruptive rhetoric of the current administration, and of media pundits, has only exacerbated the disjuncture in this country.

This exhibition features artists who reveal a capacity for empathy, a willingness to reflect on another's point of view or to understand those whose backgrounds differ from their own. Through photography, video, sculpture, drawing, embroidery, installation, performance, and virtual reality, the artists engage in projects that employ deep listening, compassion, care ethics, and other empathic skills. Bundith Phunsombatlert collaborated with seniors at Rosetta Gatson Neighborhood Senior Center through a series of workshops, inviting senior residents to share their stories while teaching them the cyanotype photographic printing process. All of the participants were Caribbean immigrants and several of their migration narratives were collected into an artist book that is being published by the artist. Appalled by news reports of immigrant children being separated from their families at the U.S.-Mexico border, Michael Kelly Williams was moved to create a new work for the exhibition, which addresses the immigrant crisis in this country.

Acknowledging and commemorating those who have experienced trauma, two artists, Iván Sikic and Andrea Arroyo, have each created a body of work that contends with the issue of violence against women. Sikic’s Amor Humano is a response to femicide cases in his homeland of Peru, creating a performance recorded in video and photography that was inspired by the sounds, rituals, and aesthetics of Huayno culture, a genre of music from the Andean region of Peru and Bolivia. Arroyo’s installation Flor de Tierra: Homage to the Women of Juarez II honors the hundreds of women who have been murdered or have disappeared in Ciudad Juarez, Mexico since 1993. Her drawings on paper, Tyvek, and acetate intervene in the space while interacting with the natural light entering the gallery through the windows. In both artists’ projects, they have included names of those who have perished, in an effort to recognize them as individuals rather than nameless victims.

Empathy can be described as the psychological identification with or vicarious experiencing of the feelings, thoughts, or attitudes of another, and several artists in the exhibition have created work that places the viewer in this position, encouraging them to see another’s perspective. Zac Hacmon’s Gateway is a menacing sculptural intervention at the front of the gallery. Visitors must decide to enter the space by passing through the structure or walking around it. The interactive piece is a reconstruction of the Kalandia checkpoint, located near Jerusalem, between the Kalandia refugee camp and two Palestinian towns, Ramallah and ar-Ram. It is used by the Israeli military to control Palestinian access to Israel. As a structure, Gateway conveys the heavy physicality of border crossings, while relocating the checkpoint passage in a space with no border to cross. As an immersive piece of architecture, it nonetheless shifts meaning from forum to prison, and from watching to being watched.

Rosary Solimanto’s Weight is an interactive artwork that was inspired by the visual aesthetic of orthopedic braces, work boots, and Frankenstein’s shoes. It portrays legs and feet as heavy loads, simulating the adversities that people with imperceptible health conditions experience. Having suffered multiple sclerosis, Solimanto created the wearable sculpture to encourage conversations surrounding disability identity through social engagement. Beatrice Glow, in collaboration with Alexandre Girardeau, has created a virtual reality experience, to be presented in a drop-in program on November 29th, which places the participant in a section of Broadway that once was, and continues to be, a Native American pathway. Approaching the virtual reality experience not as a final product, but as a platform for collective envisioning that has the potential to evolve into an immersive oral history project, the artists ask how we can expand knowledge of Indigenous Manhattan and what a sustainable Indigenous future can look like.

A featured project in the exhibition is Patricia Thornley’s THIS IS US: The Western, a video installation in which archetypal characters from Civil War Era Westerns are used as a framework for interpreting the American psyche. The installation is comprised of two elements—a “movie”, and interviews with the seven characters seen in the film—and was shot in Wyoming, Montana, Colorado, New York, and Nova Scotia. The two elements play simultaneously on opposing walls, and the viewer moves between them, as one side of the darkened room answers the shortfalls and gratifications of the other. The participants are adapted to reflect their character to varying degrees: Indian Scout, Beast of Burden, Frontiersman, Savage, Deserter, Justice, and Drifter. The director (the artist) often eclipses the characters in the service of cultural consensus and order—mirroring our culture’s inability to shed old mythologies—and in recurring theme music her voice enters and exits, embodying the role of music in controlling perception. The identities of character, actor, and participant blur in ways that confuse these positions. In this ambitious project, empathy works on multiple levels, with director, actors, and viewers being challenged to consider the unique viewpoints of each character. THIS IS US: The Western muses on how media representations of that era, reinforced over generations, have defined characteristics that the world recognizes as American: confidence, crudeness, individuality, self-reliance, aggression— characteristics that continue to shape our national identity and impact a new international landscape.

A secondary definition of empathy, from which the concept actually originated, is the imaginative ascribing to an object feelings or attributes present in oneself. In this sense, works of art are natural vehicles for empathy. A number of the artists are exploring this concept of being able to relate to another person through aesthetic objects. In this way, personal belongings, photographs, and furniture become conduits for this type of inward reflection. For her photography series Encyclopedia of Things, Elisabeth Smolarz has collaborated with individuals of diverse backgrounds to create still life images that represent a portrait of each participant. The process of composing each work involves engaged dialogue and active listening between artist and collaborator as they arrange objects of deep personal significance to the participant. In iliana emilia garcia’s work, the chair has been one of her signature icons that embody memory, heritage, community, and diversity, as well as qualities such as resilience, purpose, tolerance, and kindness. Stacked and clustered together, the chairs in garcia’s drawings represent a pile of personal stories moving along similar paths, which at times branch out in a thousand directions, but other times intersect. Individuals form groups that share the same landscapes and bond through mutual understanding.

Rather than propose empathy as a solution for today's societal ills, this exhibition also acknowledges the limitations of "walking in other people's shoes." The visitors moving through Hacmon’s Gateway, for example, may never know the harrowing experience of Palestinians crossing Israeli checkpoints, but they might become more aware of barriers to access that we encounter in our everyday lives. By shifting their perspective, some might even relate to those affected by increasingly stricter immigration and border policies. Sasha Phyars-Burgess’s photo-based work grapples with the experience of her African American family, raised in a lower-income community in Reading, Pennsylvania, with that of her similarly impoverished white neighbors. In her recent photo collages, she attempts to tease out the complicated history and origins of racism, white privilege, and poverty in working class American towns, and the potential for these cycles to change.

Empathy can accommodate both compassion and rational analysis for those on both sides. To empathize, in this case, is to look at someone else's belief systems in relation to one’s own worldview, to better comprehend why we believe what we believe, while recognizing that no one can ever truly perceive someone else's struggle. Through an attempt to appreciate another’s experiences and values across social, political, and cultural divides, progress can be made toward finding common ground and fostering an environment of mutual respect.

Smack Mellon’s programs are also made possible with public funds from the National Endowment for the Arts and with generous support from The New York Community Trust, The Edward and Sally Van Lier Fund of The New York Community Trust, The Roy and Niuta Titus Foundation, Jerome Foundation, The Greenwich Collection Ltd, Milton and Sally Avery Arts Foundation Inc., Brooklyn Arts Council, and Exploring The Arts.

Space for Smack Mellon’s programs is generously provided by the Walentas family and Two Trees Management.

Every Sunday at 12:30, 2:00, and 4:00 PM
Photo Sessions
For her ongoing photo series, Encyclopedia of Things, Elisabeth Smolarz will invite individuals to make a collaborative still life image that reveals a sense of identity and selfhood. Through engaged dialogue, Smolarz will work with each participant to arrange the irreplaceable items into an installation for the camera. The resulting photograph becomes a non-concrete portrait that tells an enigmatic, yet personal story of the individual. Make an appointment with the artist on a Sunday afternoon and bring objects of personal significance. Sign up by emailing [email protected] or calling 718-834-8761.

Thursday, November 29, 6:00–8:00 PM
Virtual Reality Experience
Beatrice Glow and Alexandre Girardeau, founder of Highway101ETC, will present Mannahatta VR, an interactive virtual reality experience that brings together the past and present of one section of Broadway, which was, and continues to be, part of a matrix of Native American pathways in Manhattan, or Manaháhtaan, as originally named by the Indigenous Lenape people. Visitors can participate in or observe the VR experience. Culture bearers George Stonefish (Lenape Nation) and Tecumseh Ceaser (Matinecock Nation) will be present to share Native New York culture and history.

Sunday, December 2 and Saturday, December 8, 2:00–5:00 PM
Interview Project
Artist Susan Stainman will activate her social sculpture, Poised for Intimacy, inviting visitors to sit and have a conversation with her. Resembling two chairs connected to one other, Stainman’s sculpture is a restful place for strangers to create a moment of contact and to experience both the uncertainty and connection that can arise when we truly listen and speak from the heart.

Thursday, December 6, 6:30–8:00 PM
Movement Workshop: Butoh and Alterity
Join dancer, choreographer, and teacher Vangeline in a Butoh movement workshop. Founded in Japan in the aftermath of World War II, Butoh is a dance form that had its origins in embodying distress. It often involves playful and grotesque imagery, extreme settings, and slow, hyper-controlled movements. Vangeline will guide participants in considering the other on a corporeal level.
As artistic director of The Vangeline Theater dance company and founder of the New York Butoh Institute, Vangeline has created work that is firmly rooted in the tradition of Japanese Butoh while carrying it into the 21st century. This workshop is free and open to the public, but registration is recommended because of limited capacity. Register by emailing [email protected] or calling 718-834-8761.

Saturday, December 15, 4:00 PM
Film Screening and Discussion
Corinne May Botz will screen her short film Bedside Manner about standardized patient simulations that are conducted by medical doctors and professional actors. The 18-minute film explores the performative aspects of doctor-patient encounters and issues concerning empathy. It will be followed by a post-screening discussion with the artist and with Dr. Alice W. Flaherty, a neurologist who is featured in the film. Photographs from Botz’s Bedside Manner series are also on view in the gallery.