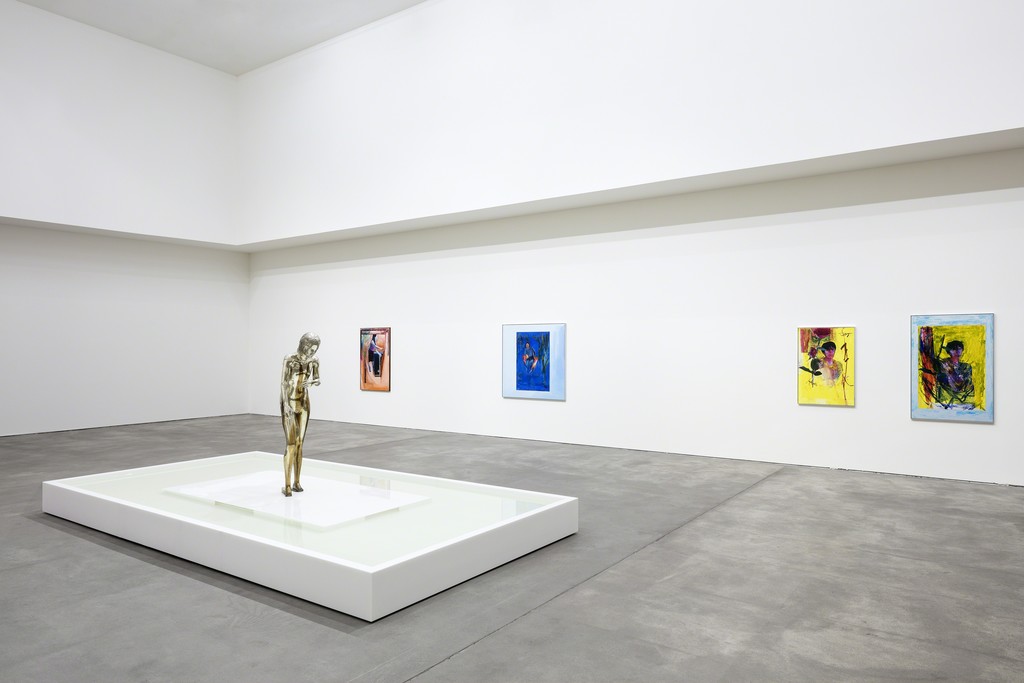 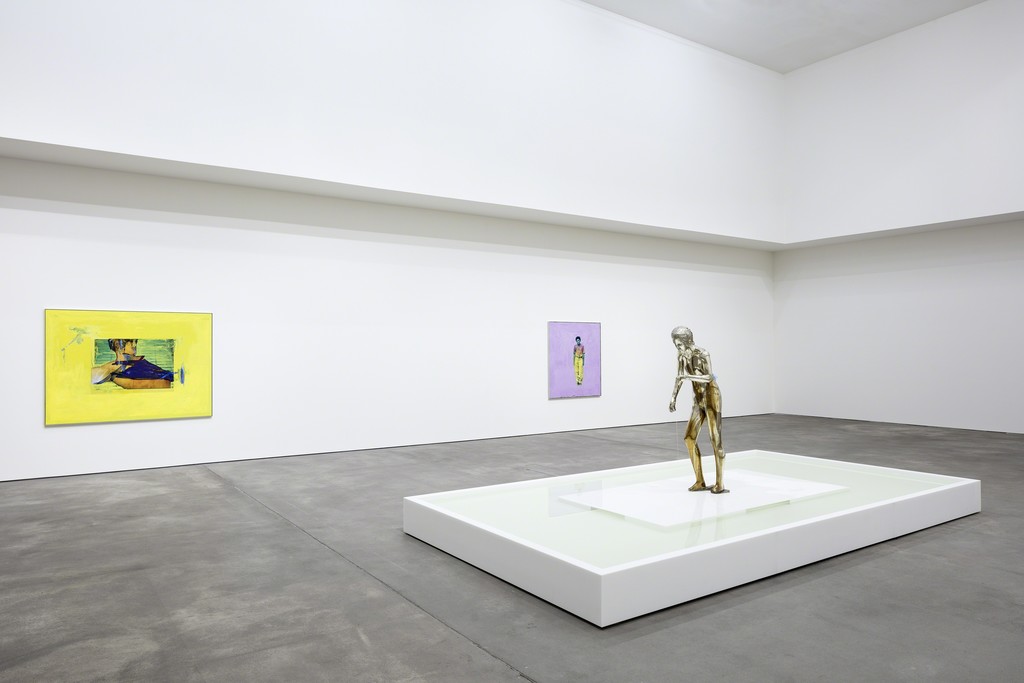 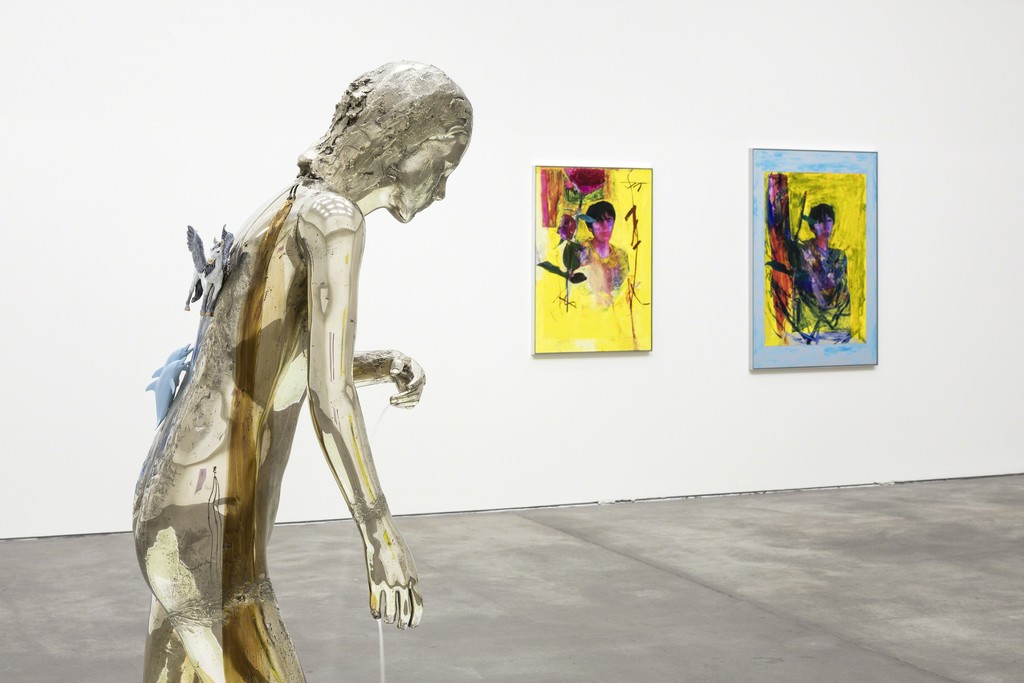 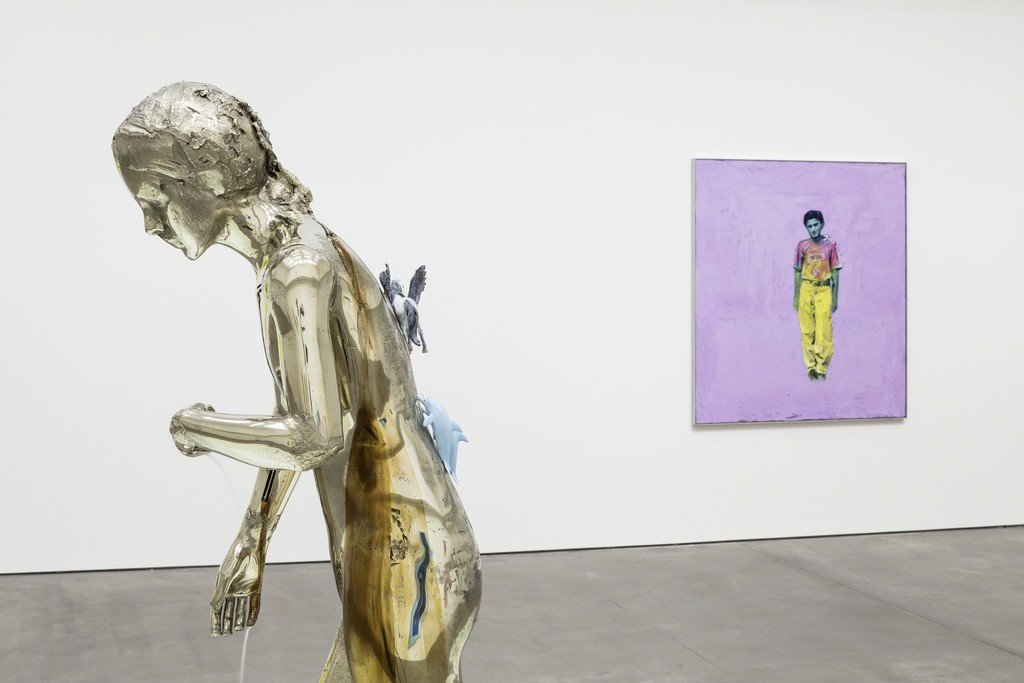 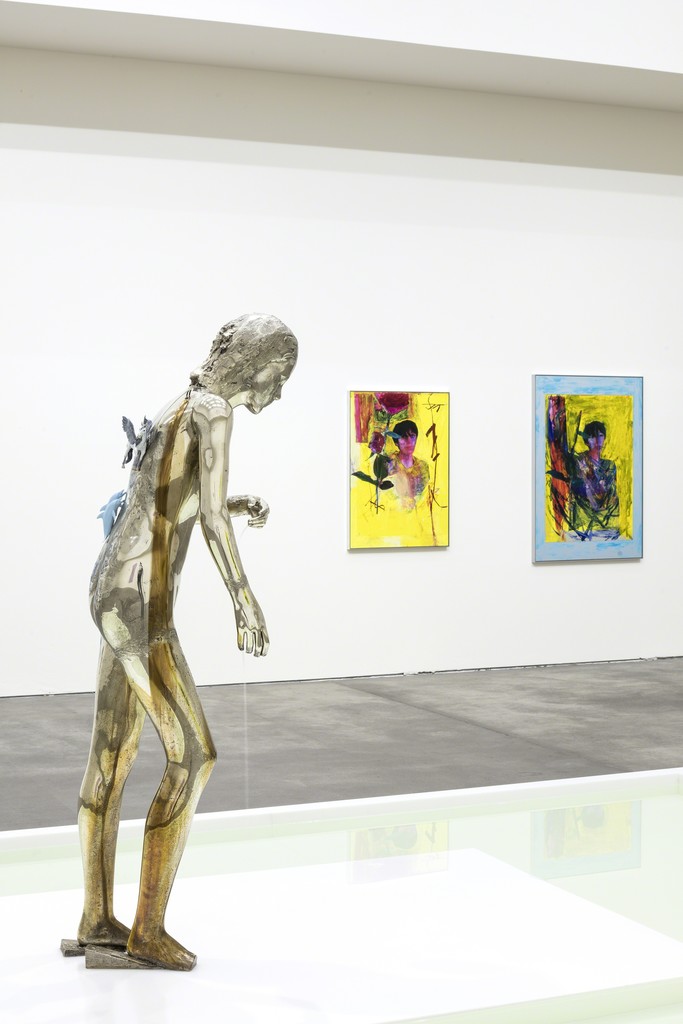 At the center of Andro Wekua’s new exhibition at Sprüth Magers is a life-size sculpture made of nickel silver - a silver-like alloy of copper, nickel and zinc - and a group of paintings. The untitled sculpture recalls Wekua’s earlier mannequin figures and continues their subtle formal vocabulary. The androgynous figure appears situated between the sexes; its body has a prepubescent, almost childlike look. On the back of the sculpture sits a small, black bronze Pegasus with purple wings—a futuristic element, childish toy and mythical reference in one. The physical proportions of this figure are realistic only at first glance; they are unthinkable in real life. The figure is a composite of various, non-related body parts. Before casting, it was composed of miscellaneous models of real limbs. Even the sculpture’s body posture probes the limits of what is physically possible. It recalls the Christ figure in Michelangelo’s unfinished Rondanini Pietà. In the original, the Virgin Mary stands behind her dead son and tries to hold him upright. Wekua’s figure stands in a pool; water runs from parallel slits on its arms and shoulders. Its silvery surface is in constant motion and yet it appears preserved in a state of perpetual stagnation. For all its overt artificiality, this figure seems to lead a psychological life of its own. It seems strangely, if improbably, alive.

The sculpture is surrounded by a series of paintings. Wekua uses an architectural redefinition of the space to create his own viewing plane for the paintings while simultaneously reflecting the centrally-positioned sculpture as an object in space. Like the sculpture, the process of creating the exhibited paintings is based on strategies of assemblage and collage. Photographs were often a starting point for these works; Wekua treats these photos as archive material. First they appear in paper collages, then the collages are transferred to aluminum-composite plates using a complex, painterly silkscreen-printing process with different layers of pigment. The finished paintings emerge when Wekua edits and paints over these plates. Using a process of continuously applying oil paint and removing it, changing backgrounds, blurring or adding details, he constructs new contexts of meaning for his source material. The dominance of the respective color background and proportions of the original photos he incorporates often evoke the tradition of icon painting. The process of creating these paintings follows the same self-reflective, abstracting and sometimes effacing process that our memory does. Wekua succeeds in compressing several levels of time into one image while countering the past with a poetic reality of his own. These works are not to be understood as commentaries on the past and certainly not as its reconstruction. Rather, they are aimed at its complete, aesthetic transfiguration.

Various geographies, stories and characters appear again and again in Andro Wekua’s work. He tears these elements out of the totality of life context and fuses the isolated fragments of reality back together in an unexpected way. Subjective memories dissolve in the logic of dreams. Latent elegance and subtle symbolism trigger mechanisms of the uncanny. Few can illuminate the dark, in-between spaces of emotion and memory, the ambiguities of history, fantasy and (art)-historical memory better than he. Seemingly effortlessly, Wekua expresses universal narrative structures and creates timeless works.