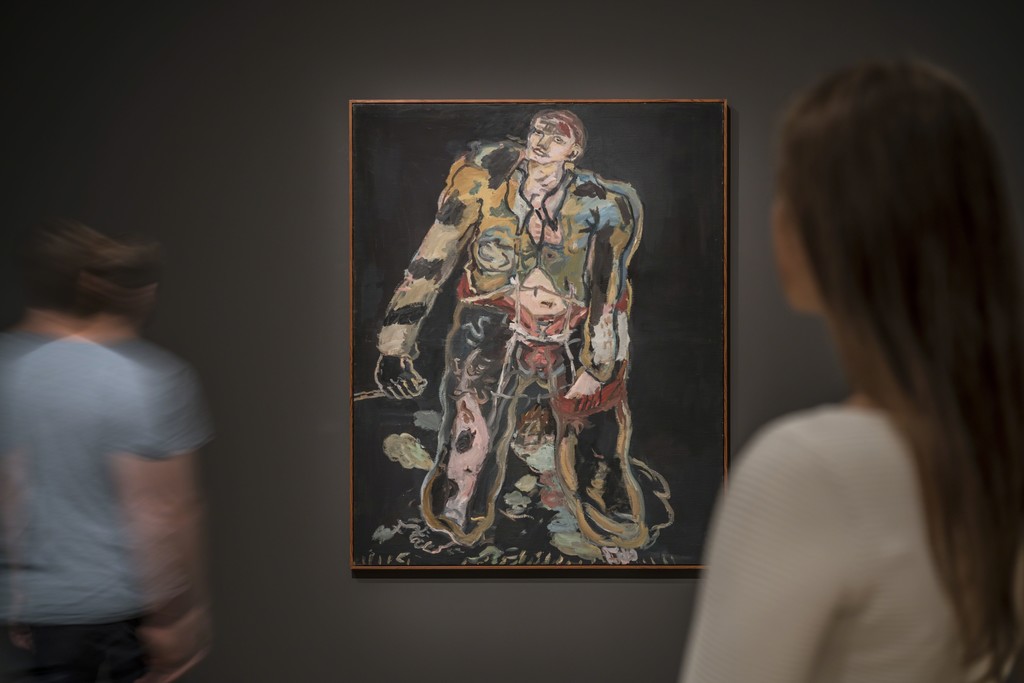 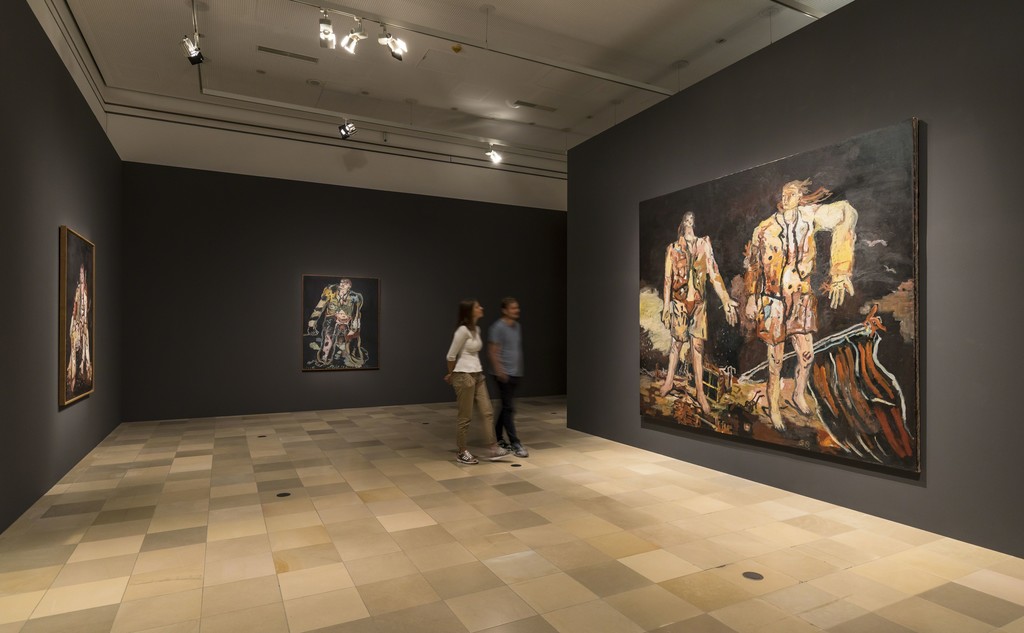 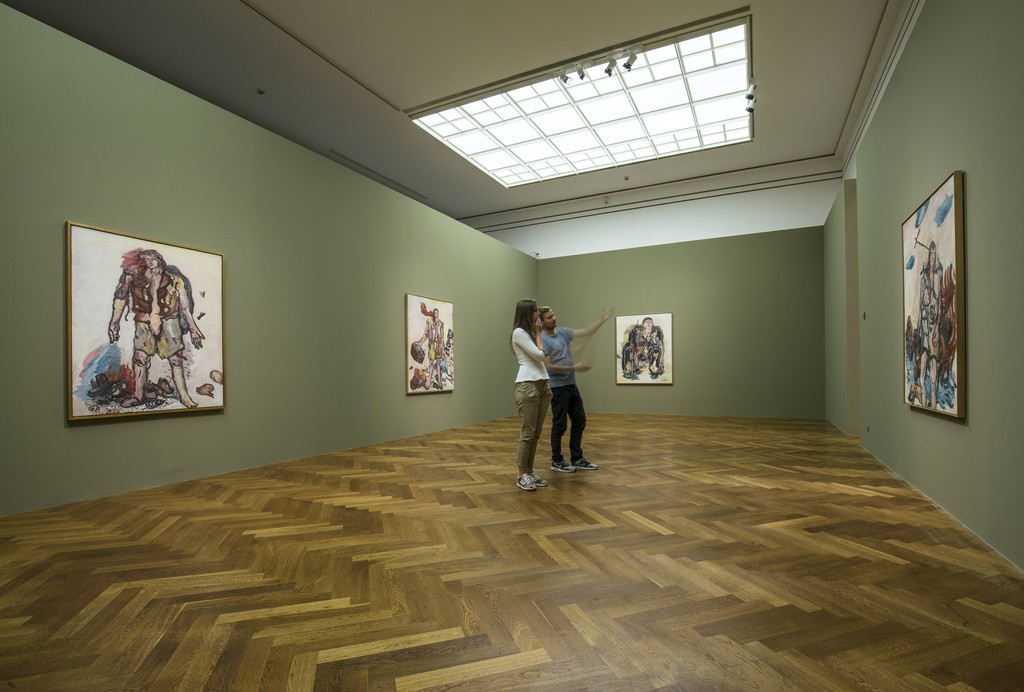 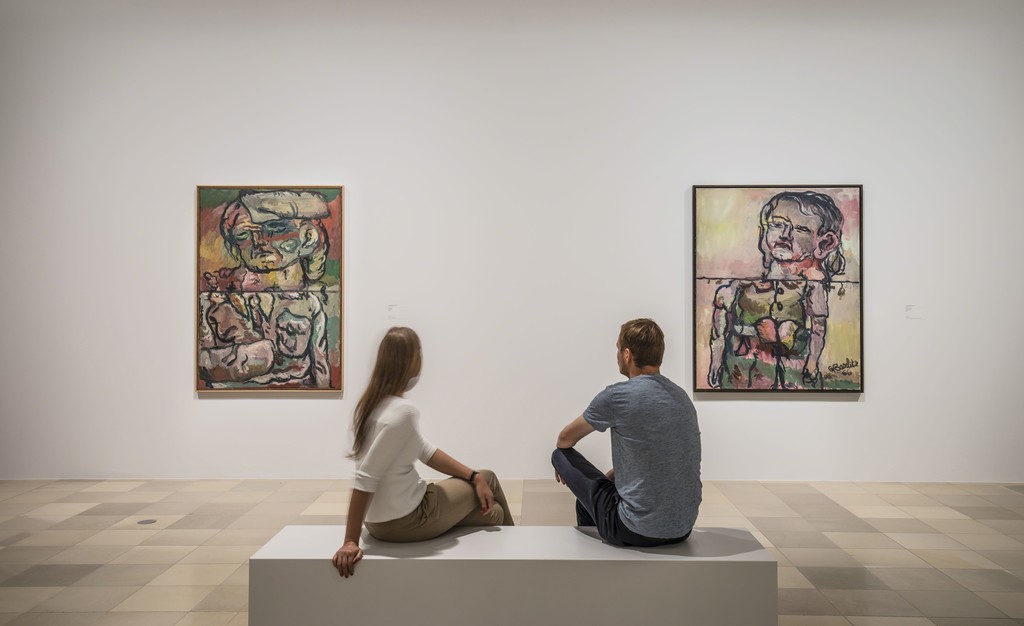 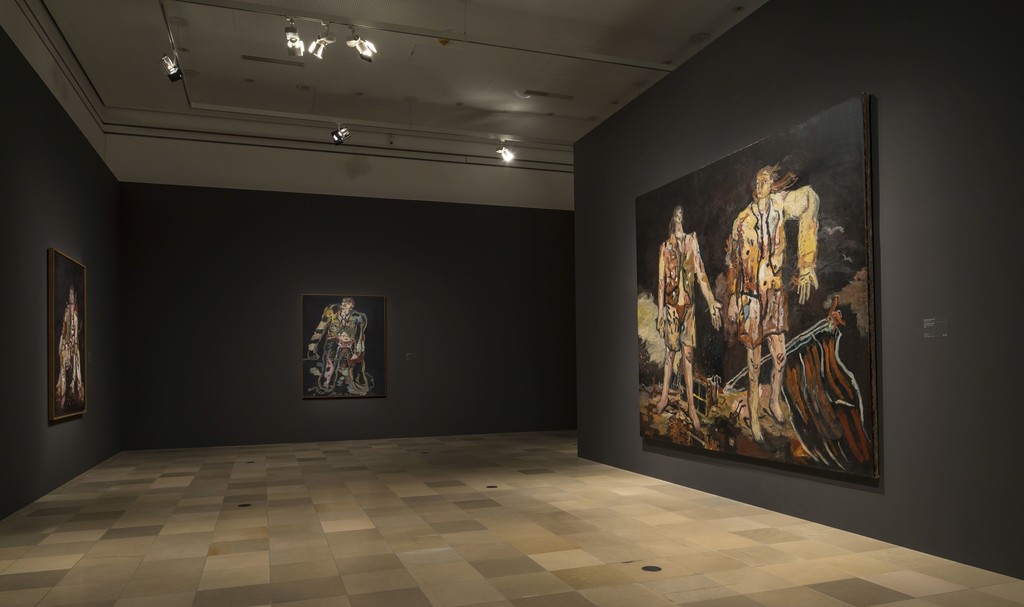 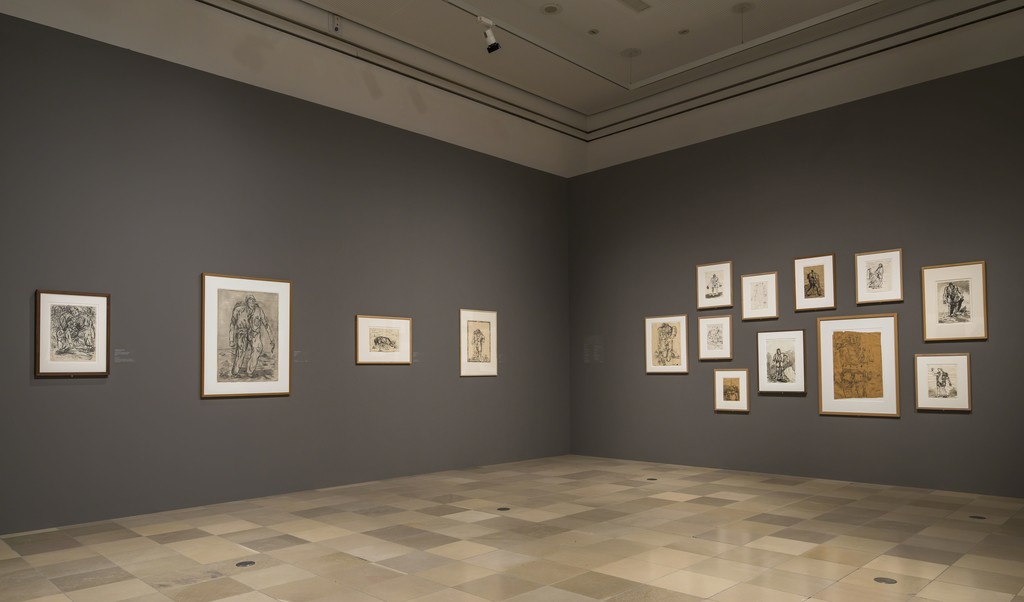 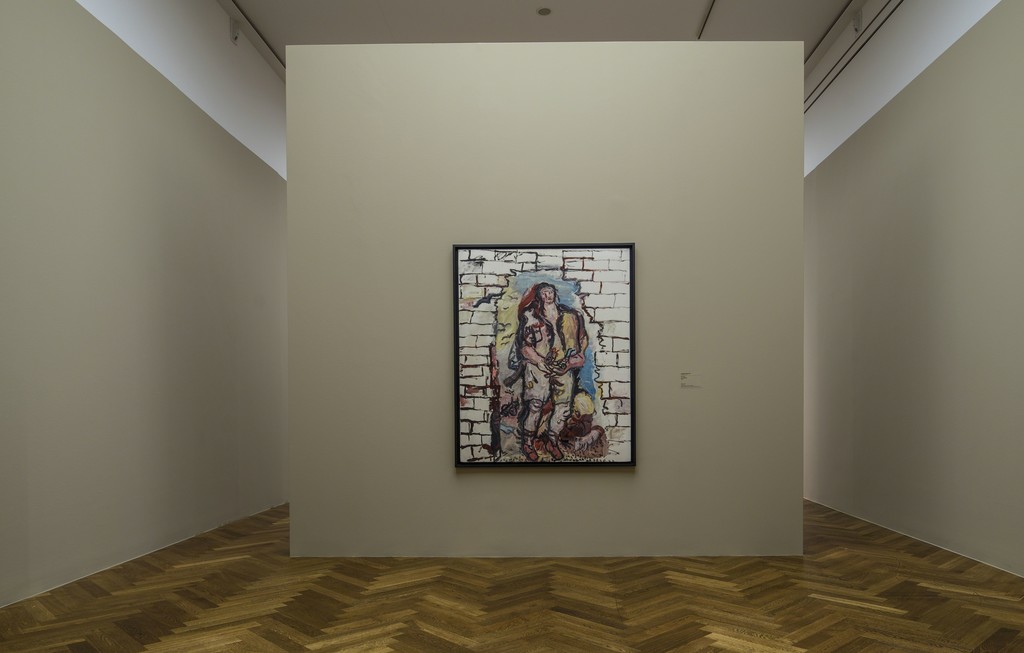 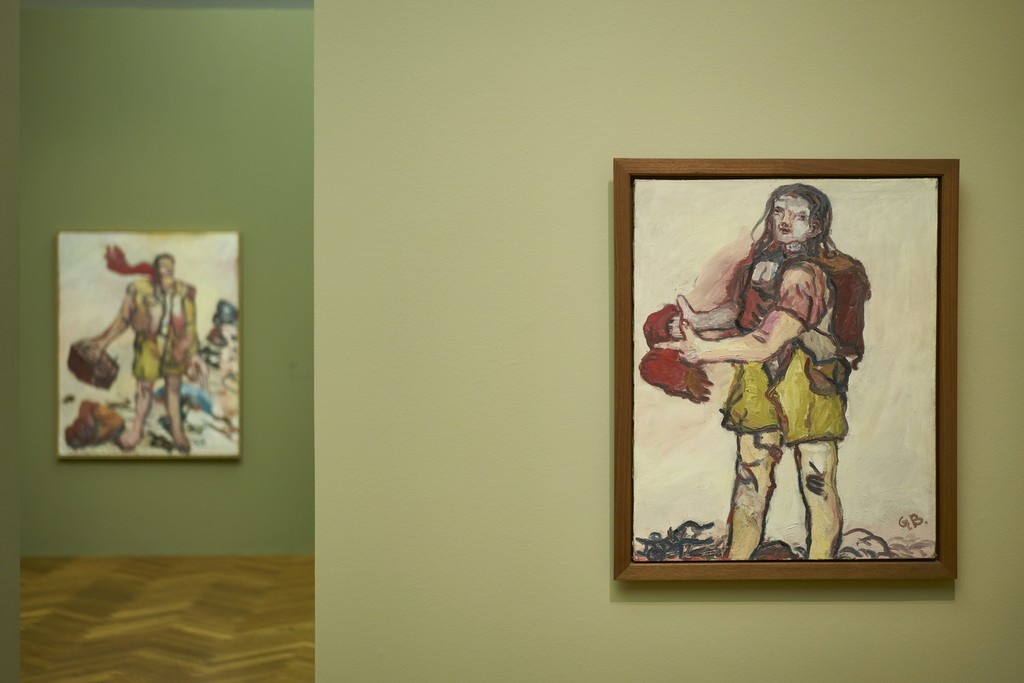 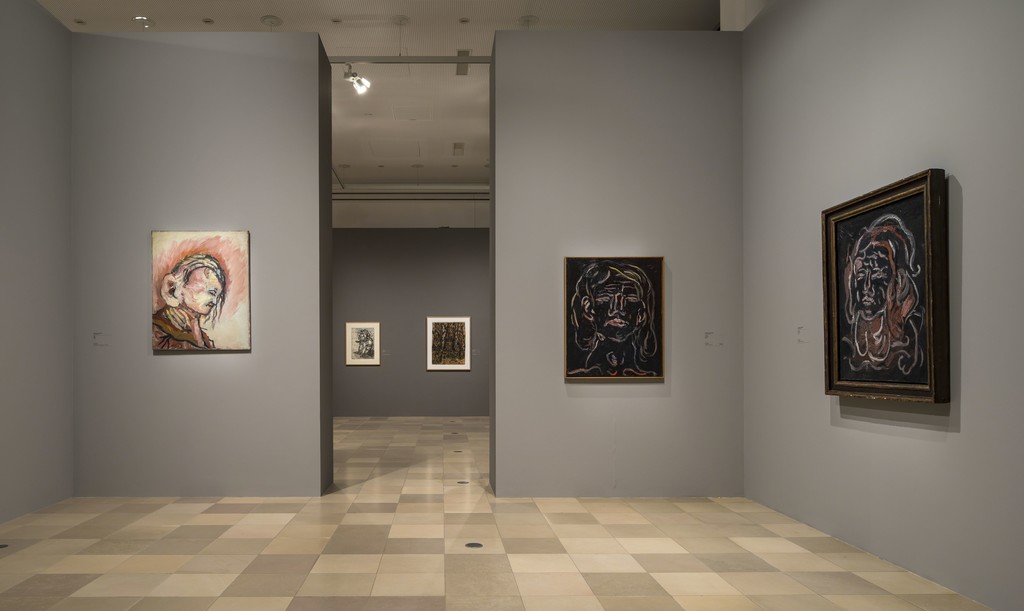 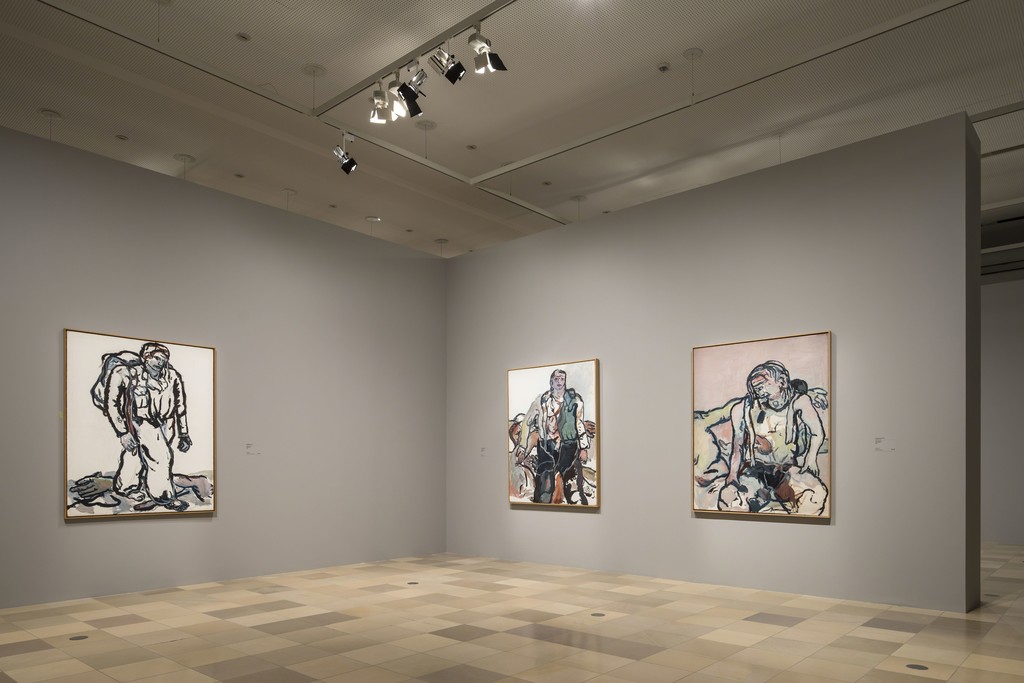 Frankfurt, 16 June 2016. From 30 June to 23 October 2016, the Städel Museum is presenting Georg Baselitz’s famous “Heroes” in a comprehensive monographic special exhibition fifty years after the paintings’ making. Georg Baselitz (b. 1938) definitely ranks among the most influential painters and sculptors of our time. His powerful workgroup of “Heroes” and “New Types” is regarded as a key achievement of 1960s German art all over the world. In the exhibition curated by Max Hollein, it is being shown on a large scale for the first time. Some seventy paintings and works on paper are on view: their aggressively and defiantly painted monumental figures have lost nothing of their ambiguous, portentous and vulnerable quality to this day. Baselitz’s “Heroes” are raddled soldiers, resigned painters, marked by their latent failure as well as by their uncertain future. The fragility and contradictory nature of the “Heroes” in terms of contents find their formal equivalent. The consistently frontal depiction and central placement of the clearly outlined figures contrast with the wildness of the artist’s palette and the vehemence of his painting style. Loans from important international museums and private collections offer the public a wide-ranging view of these icons of German postwar art conceived by the only twenty-seven-year old artist in a spurt of explosive productivity in 1965 and 1966. After its début at the Städel Museum in Frankfurt, the major exhibition will travel to the Moderna Museet Stockholm, the Palazzo delle Esposizioni in Rome, and the Guggenheim Museum Bilbao. The exhibition “Georg Baselitz. The Heroes” is being sponsored by Goldman Sachs.

“The ‘Heroes’ are both a landmark and a fervent pivot in Georg Baselitz’s oeuvre. They have sprung from a deep, inner necessity in a deliberate confrontation with pressing, charged subjects and unfold a timeless reflection on the artist’s existence as such. Giving expression to strikingly visualized and self-felt isolation, uprooting, and lack of orientation, the works render the artist’s precarious state of experience in a broken world, establishing a paradigmatic image of his condition”, says Max Hollein, curator of the show.

In 1965, Georg Baselitz found himself faced with an order destroyed in multiple ways: twenty years after the end of World War II, ideologies and political systems, as well as artistic styles, were up for discussion. This lack of systems of order was very much in keeping with the artist’s own nature: appropriation through artistic categorization is something that has remained foreign to him throughout his life. Fundamentally skeptical, Baselitz emphasized the equivocal aspects of his time. Breathing failure and resignation, his monumental “Heroes” in their tattered battle dress evince an accordingly contradictory character. That the artist devoted himself to the subject of “Heroes” or “Types” at all at that time was a provocation in itself. (Male) heroism and its one-time exponents had been called into question by the war and the postwar period. Figures from a presumably buried past are brought back to life, picturing a reality which was anything but welcome in the German Federal Republic’s success story of the economic miracle – and this in the supposedly obsolete form of figurative painting. Yet the artist was concerned with far more than general issues of society. In numerous role depictions – the spectrum includes the “New Type”, the rebel/partisan with historical/political connotations, the spiritual shepherd and the painter adopting a position – Baselitz visualized his individual stance and his personal path as a painter. In a staggering act of self-assertion and identity definition that ran contrary to the prevailing currents of the time, he reflected on his own position vis-à-vis the society in which he lived.
“I’ve carried out a lot of experiments in fifty years. But I don’t think the ‘Heroes’ require any further coaching”, comments Georg Baselitz on the “Heroes” and “New Types” workgroup.

“The Städel’s exhibition is presenting Baselitz’s ‘Heroes’ across two floors of its Exhibition Building in an interplay of empty spaces and zones of concentration,” says Eva Mongi-Vollmer, co-curator of the exhibition. Special emphasis has been placed on the impact of the individual paintings and drawings. Thanks to the varied wall colors and the strongly rhythmical – and frequently surprising – presentation, a visit to the exhibition heightens the perception of the works and sensitizes the viewer.

Baselitz’s “Heroes” and “New Types” with their colossal bodies and extremely small heads are always positioned in the very center of the picture. They stagger or, sometimes clumsily, sometimes in complete control, stalk through the pictorial space. In accordance with their maltreated bodies, their bleak surroundings suggest devastation: houses on fire, trees stripped of their leaves, thrown-up mounds of earth. The vagrant “Heroes” are furnished with a repertoire of recurring objects they carry with them: field packs, palettes and brushes or instruments of torture. Despite the repetitive format of 162 × 130 centimeters, each of the works strikes us with an expression all of its own, which strongly depends on the chosen method of painting and the colors employed. The loose chronological sequence of works in the presentation testifies to Baselitz’s gradual breaking away from his motif. It is only a short way from there to his later inversion of the subject.
Baselitz began the “Heroes” and “New Types” workgroup during the period he spent at the Villa Romana in Florence on a grant. After returning to West Berlin, he continued developing the theme. The much-discussed history of Baselitz scandals that had begun in 1963 with the show at the Galerie Werner & Katz was now drawing to a close. Within the œuvre of the artist’s early years, the “Hero” paintings represent a special turning point and can today be regarded as a historical document. These works did not fall into line with the artistic tendencies of their time – whether the ZERO group’s vision of the future, the French or American approaches to abstraction or the variations on German post-war Informel. Even twenty years after the end of the war, they did not content themselves with a superficial feeling of a new beginning. And even if the “Heroes” and “New Types” adhere to recurring elements in terms of motif, they are monstrous, damaged and forceful in their painterly formulation. They represent an important stance within post-1945 German art.

The exhibition is being accompanied by a comprehensive catalogue published by Hirmer, in which editor Max Hollein explores painting as a means of liberation in his introduction, while Alexander Kluge’s texts create an impressive, very special space of perception; Uwe Fleckner deals with the postheroic hero, the art historian Richard Shiff gives a lively impression of lost heroes, and Städel curator Eva Mongi-Vollmer focuses on the years Baselitz’s “Heroes” date from.

The audio guide to the exhibition (also available on the Städel app) is spoken by Georg Baselitz and Alexander Kluge. Starting on Wednesday, 15 June 2016, an elaborately designed “digitorial” – available at baselitz.staedelmuseum.de – will provide comprehensive insights into key premises and works of the exhibition.

Georg Baselitz
Born in Deutschbaselitz in eastern Saxony on 23 January 1938, Georg Baselitz began his studies at the College of Fine Arts in Berlin-Weissensee (East). After he had been expelled from the school because of “sociopolitical immaturity” after two semesters, he continued his studies in Berlin-Charlottenburg (West) in 1957. First travels abroad led him to Amsterdam and Paris. 1961 saw the beginning of his exhibition activities together with Eugen Schönebeck in an unoccupied house, on the occasion of which the first “Pandemonium Manifesto,” as it came to be called, was published. The following gallery shows were controversially received. In 1966 Baselitz left Berlin for a town in Rhine-Hesse near Worms. He painted his first picture showing its motif upside down in 1969 – a decision he remained true to throughout his further career. As he became more and more renowned, he increasingly presented his works in exhibitions abroad; in 1980 he and Anselm Kiefer were invited to represent the Federal Republic of Germany at the 39th Venice Biennale. Much-acclaimed exhibitions in various countries such as Great Britain and the United States followed. Baselitz continued his teaching activities, which he had begun in Karlsruhe in 1978, in Berlin from 1983 to 1988 and from 1992 on. Numerous retrospectives, honors, awards, and honorary professorships still pay tribute to the outstanding relevance of his work.