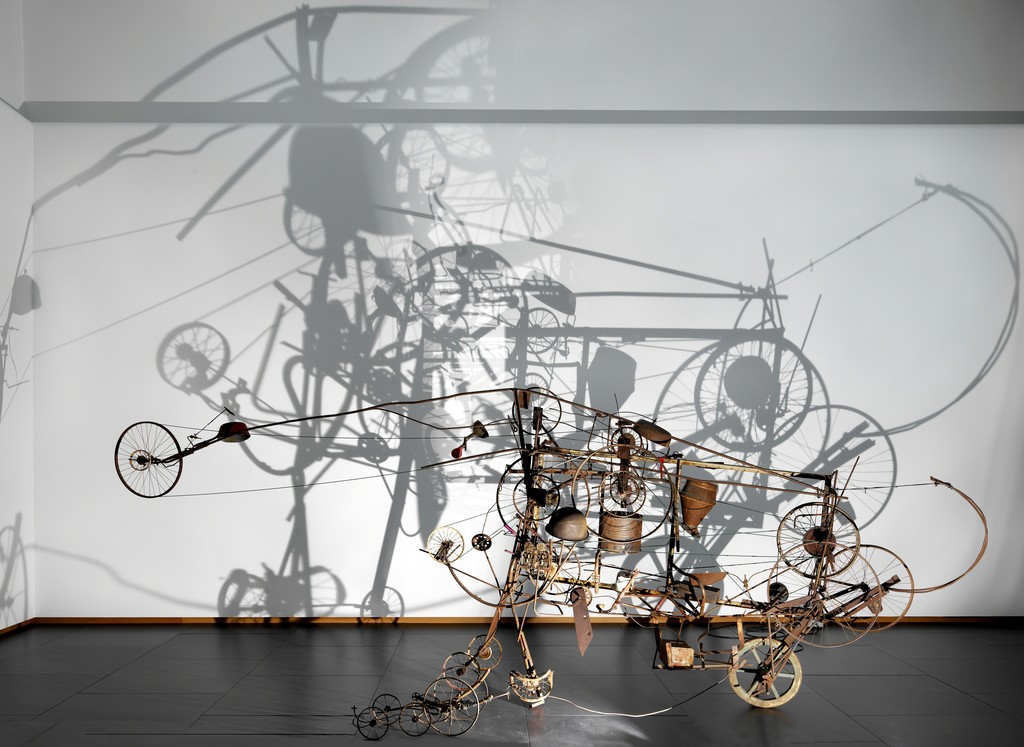 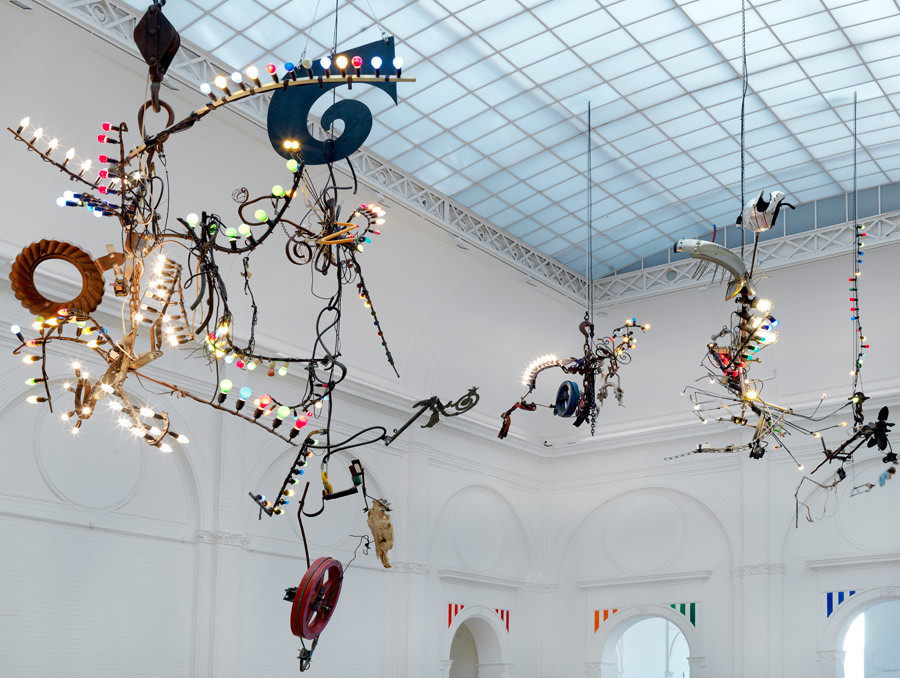 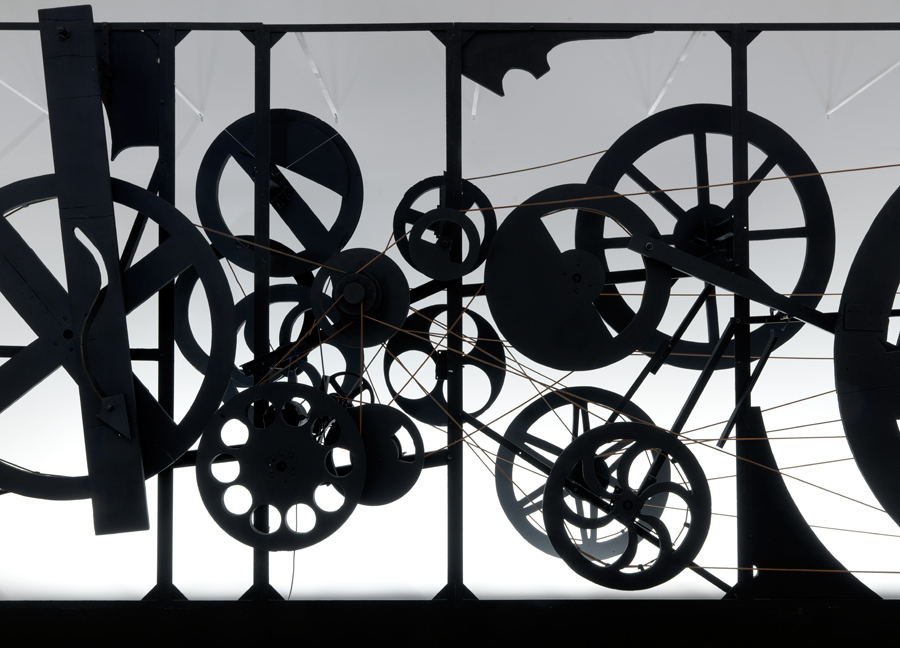 Swiss artist Jean Tinguely (1925–1991) is famous for his playful, boldly kinetic machines and explosive performances. Everything had to be different, everything had to move. Precisely twenty-five years after his death, on October 1st, the Stedelijk opens a Tinguely retrospective: the largest-ever exhibition of the artist to be mounted in a Dutch museum. With over a hundred machine sculptures, most of which are in working order, paired with films, photos, drawings, and archive materials, the presentation takes the public on a chronological and thematic journey of Tinguely’s artistic development and ideas, from his love of absurd play to his fascination for destruction and ephemerality.

The presentation features his early wire sculptures and reliefs, in which Tinguely imitated and animated the abstract paintings of artists such as Malevich, Miró, and Klee; the interactive drawing machines and wild dancing installations constructed from salvaged metal, waste materials, and discarded clothing; and his streamlined, military-looking black sculptures.

First-ever presentation in the Netherlands: the imposing Mengele-Totentanz installation

Tinguely’s self-destructive performances are a special feature of the Stedelijk presentation. The enormous installations Tinguely created between 1960–1970 (Homage to New York, Étude pour une fin du monde No. 1, Study for an End of the World No. 2, and La Vittoria) were designed to spectacularly disintegrate in a barrage of sound. The presentation also spotlights the exhibitions Tinguely organized at the Stedelijk, Bewogen Beweging (1961) and Dylaby (1962), and the gigantic sculptures he later produced: HON – en katedral (“SHE – a cathedral,” 1966), Crocrodrome (1977) and the extraordinary Le Cyclop (1969–1994), which is still on display outside Paris. The survey ends with a dramatic grand finale, the remarkable, room-filling installation, Mengele-Totentanz (1986), a disturbing display of light and shadow never previously shown in the Netherlands. Tinguely realized the work after witnessing a devastating fire, reclaiming objects from the ashes to piece together his installation: scorched beams, agricultural machinery (made by the Mengele company), and animal skeletons. The final piece is a gigantic memento mori, yet also an invocation of the Nazi concentration camps. Its juddering movements and piercing sounds evoke a haunting, grisly mood.

Jean Tinguely created his work as a rejection of the static, conventional art world; he sought to emphasize play and experiment. For Tinguely, art was not about standing in a sterile white space, distantly gazing at a silent painting. He produced kinetic sculptures to set art and art history in motion, in works that animated the boundary between art and life. With his do-it-yourself drawing machines, Tinguely critiqued the role of the artist and the elitist position of art in society. He renounced the unicity of “the artist’s hand” by encouraging visitors to produce work themselves.

Collaboration was integral to Tinguely’s career. He worked extensively with artists like Daniel Spoerri, Niki de Saint Phalle (also his wife), Yves Klein, and others from the ZERO network, as well as museum directors such as Pontus Hultén, Willem Sandberg, and Paul Wember. Thanks to his charismatic, vibrant personality and the dazzling success with which he presented his work (and himself) in the public sphere, Tinguely was a vital figure within these networks, acting as leader, inspirator, and connector.

Relationship with Amsterdam and the Stedelijk

Amsterdam has enjoyed a dynamic history with Tinguely. The exhibitions Bewogen Beweging (1961) and Dylaby (1962), for which Tinguely was (co)curator, particularly underline the extraordinarily close relationship that sprang up between the museum and the artist. Not only did he bring his kinetic Méta machines to the Netherlands, he also brought his international, avant-garde network, leaving an enduring impression on museumgoers who flocked to see these experimental exhibitions. Close relationships with Willem Sandberg, then director of the Stedelijk Museum, and curator Ad Petersen prompted various retrospectives and acquisitions for the collection: thirteen sculptures, including his famous drawing machine, Méta-Matic No. 10 (1959), Gismo (1960), and the enormous Méta II (1971).

Catalogue
A catalogue will be published to mark the exhibition. Based on years of research conducted by the Stedelijk Museum and Museum Kunstpalast, Düsseldorf, the publication contains essays by several Tinguely experts, among them Margriet Schavemaker, Barbara Til, and Beat Wismer.