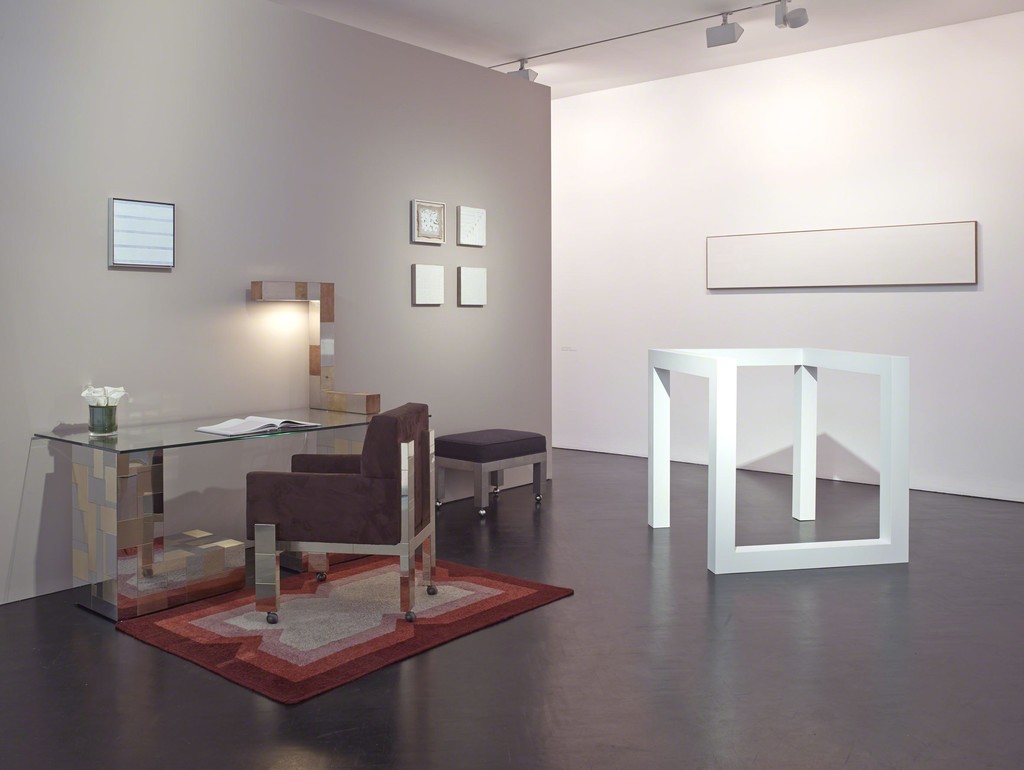 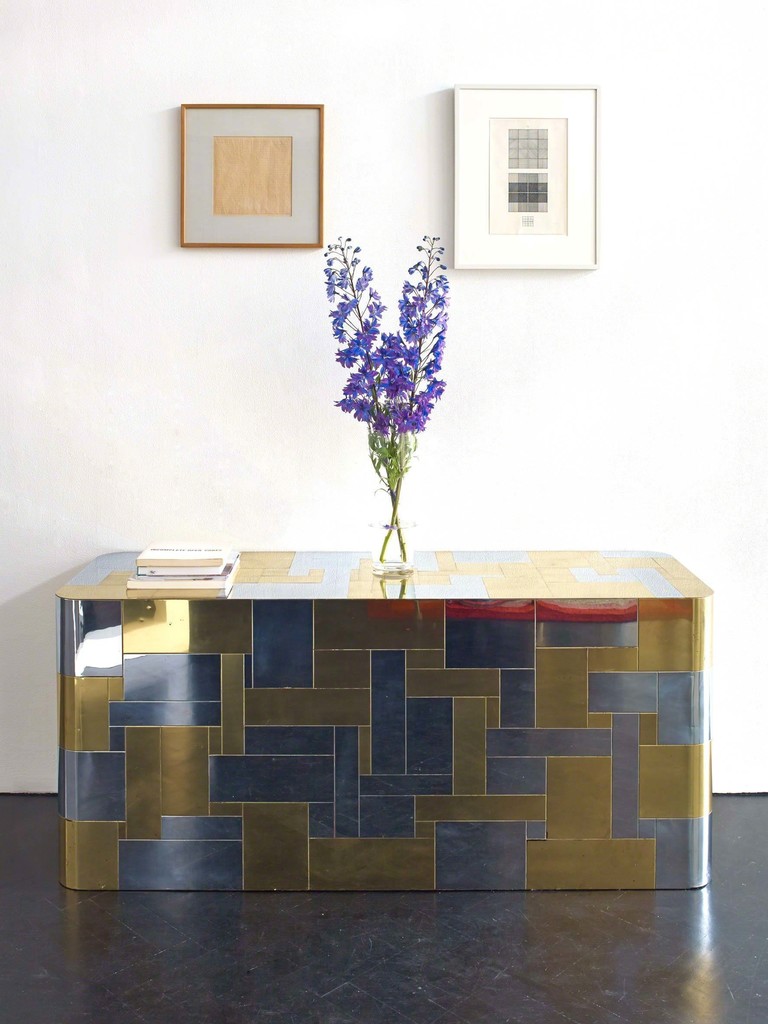 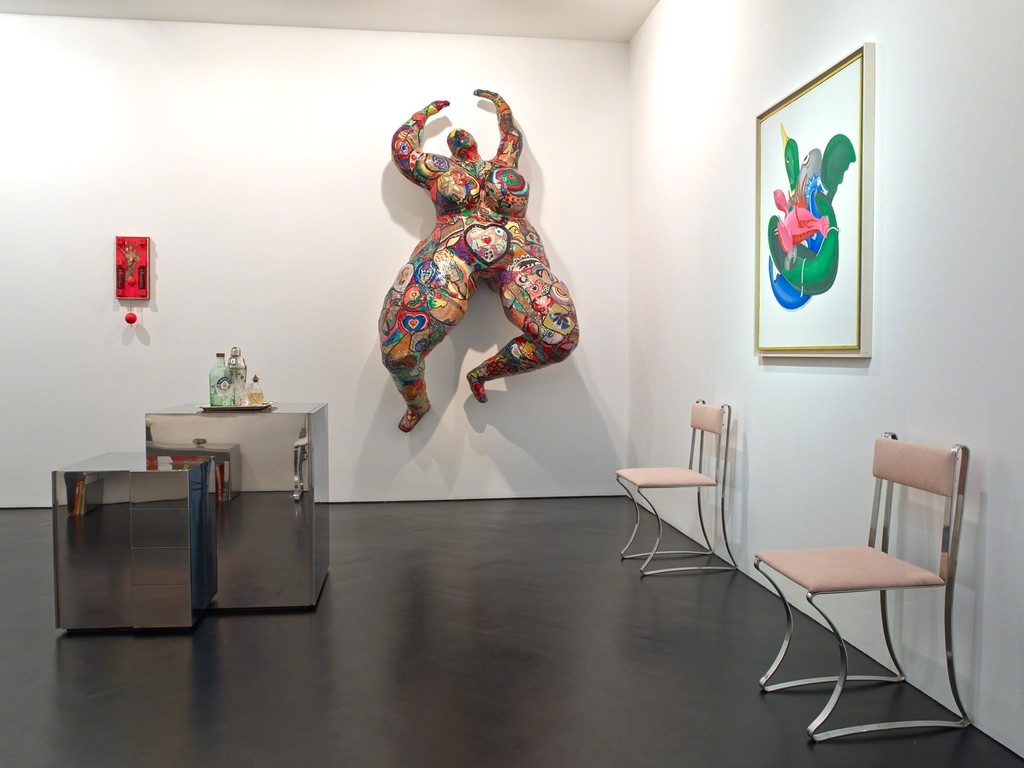 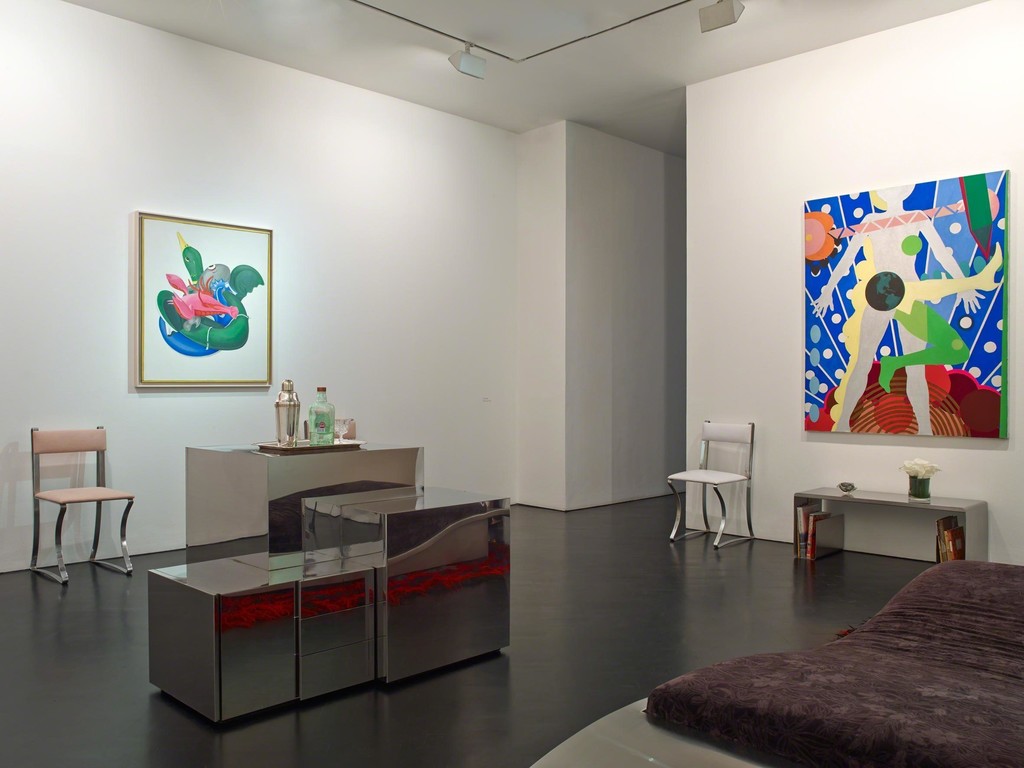 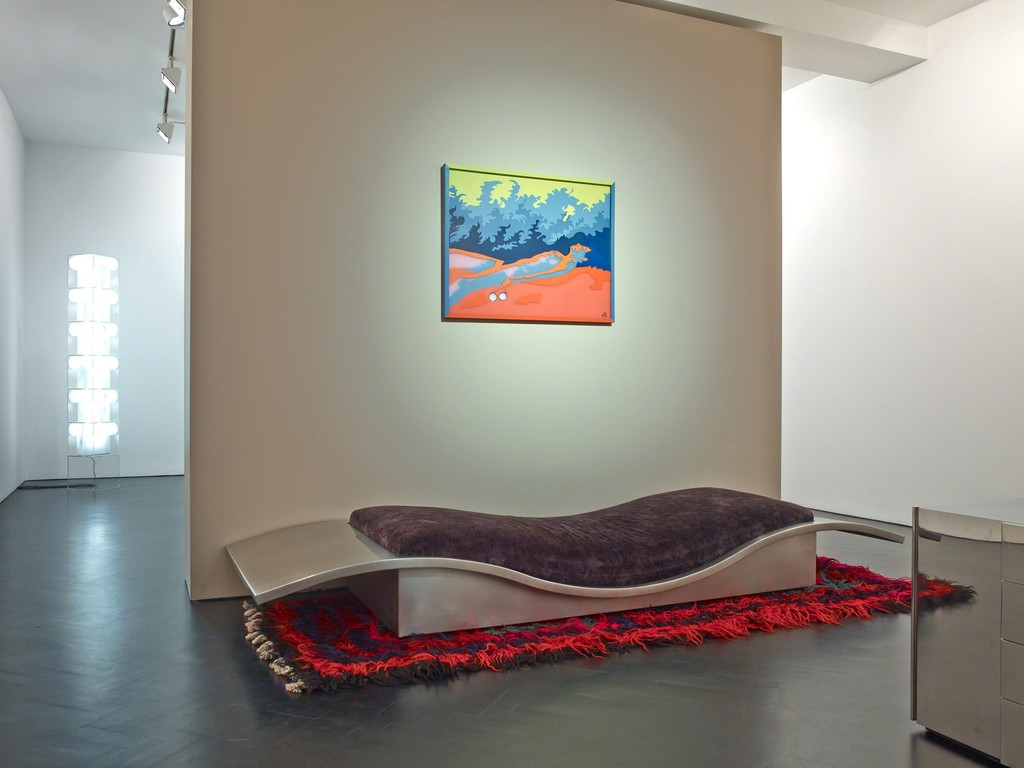 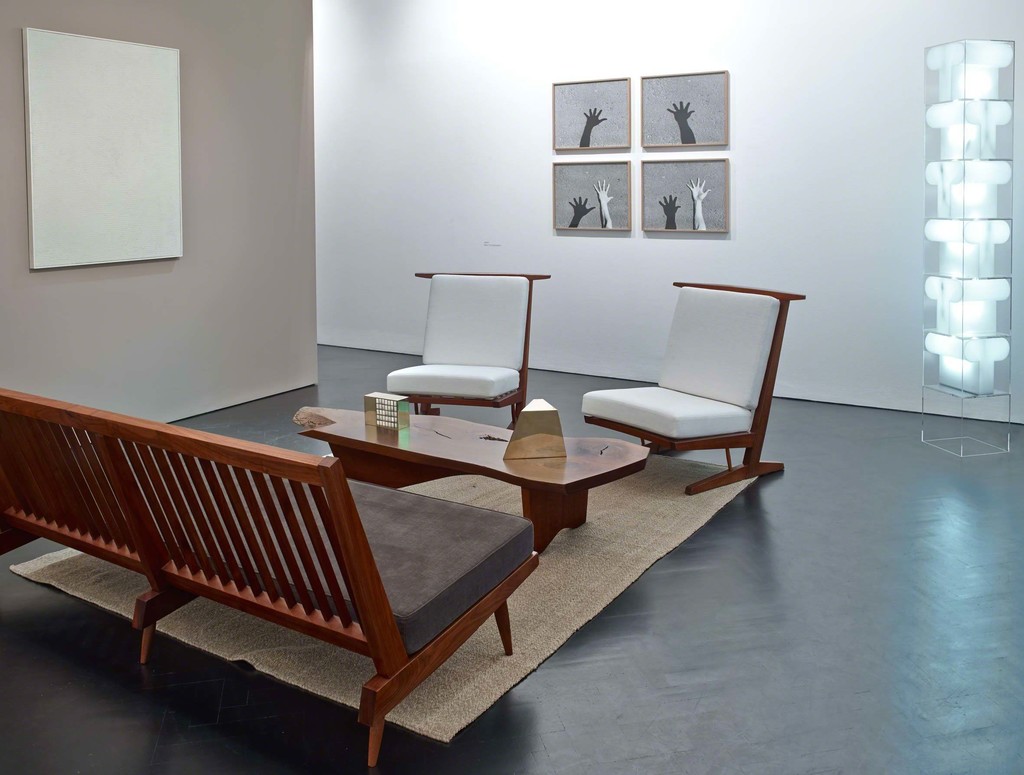 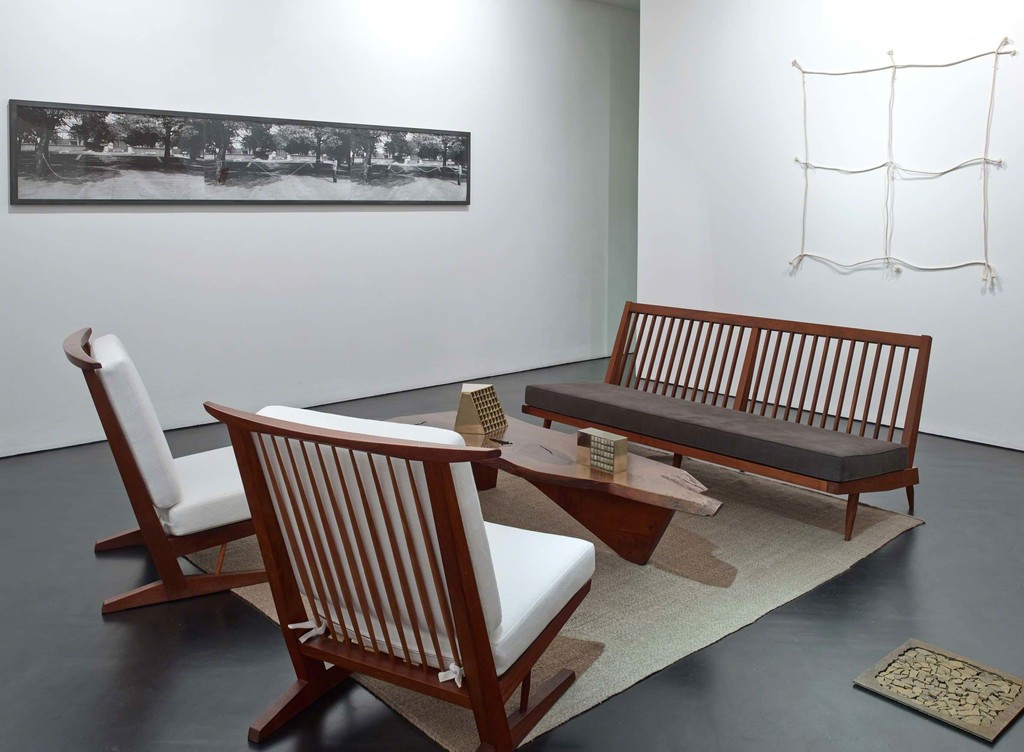 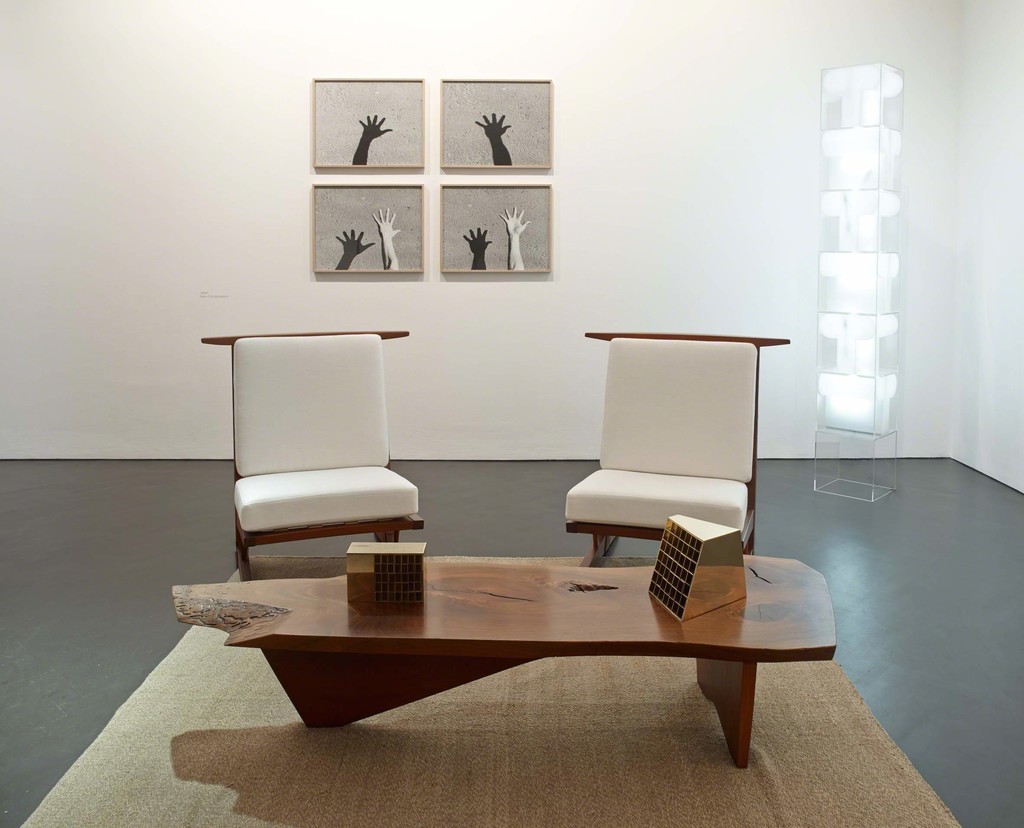 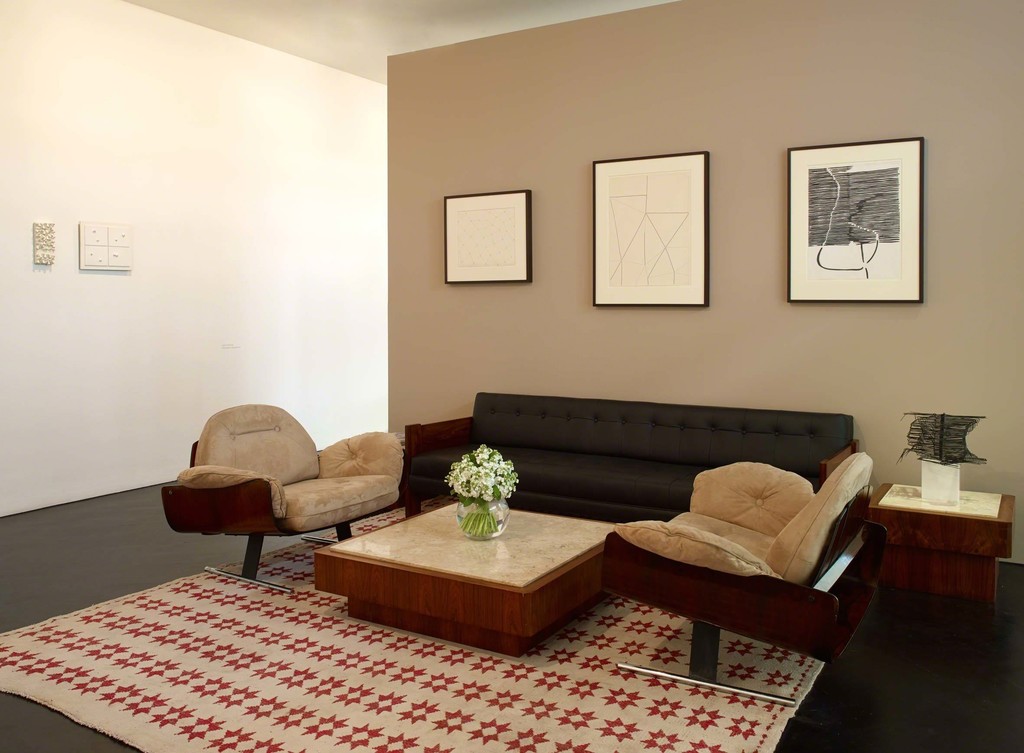 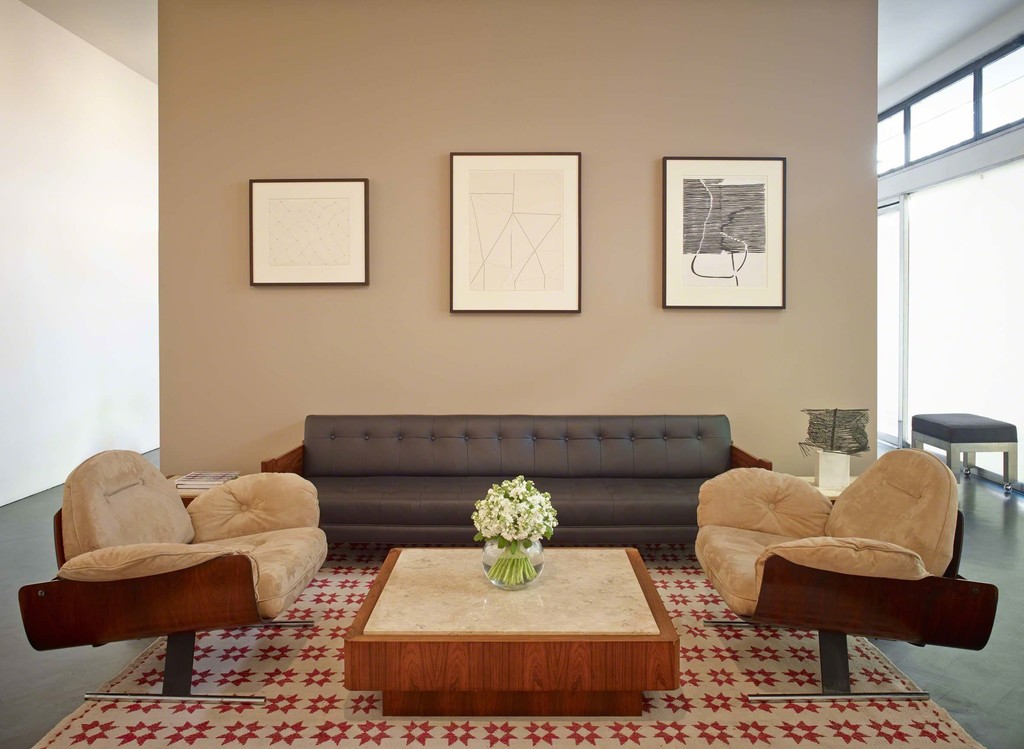 Stephen Friedman Gallery is delighted to present ‘4 x 4', a historical exhibition of art and design which focuses on four key art movements occurring simultaneously across four continents in the 1960s and 1970s. It brings together some of the most innovative and important artists and furniture designers of that period and includes artists previously unseen in the UK.

For this exhibition, the gallery has been divided into four rooms. Each one is set out as an imaginary domestic living space in a collector's house during the 1960s and 1970s in America, Europe, Japan and Latin America. Four artists most closely associated with that time period complete the presentation in each room.

The first room is dedicated to American Minimalism. Sol LeWitt, Agnes Martin, Robert Ryman, and Anne Truitt, provide a powerful overview of the breadth of this important and radical movement. LeWitt's iconic ‘Incomplete Open Cube 8/5' from 1974 is the largest sculptural version from the series and recalls the conceptual investigations at the heart of his practice. An emphasis on the simplicity of line, form and colour is also evident in important paintings by Robert Ryman and drawings and paintings by Agnes Martin.

While Martin is often heralded as a leading female Minimalist artist she rejected that term, instead accepting imperfection and spiritualism in her work. This draws a parallel with Anne Truitt's own method of working, where intuition and craft were key. Truitt's ‘Arundel IX' relates to the important series started in 1973 where subtle graphite lines are drawn onto expanses of bright white paint in a striking blanket of luminosity.

The furniture designer in this room is Paul Evans, a leading figure in the American craft movement of the 1970s. Key pieces from his ‘Cityscape' series, featuring sleek designs of chrome and brass, complement the clean lines of the artworks and provide a compelling counterpart to their monochromatic simplicity.

A second room explores the importance of Female Pop in Europe, with captivating works by Evelyne Axell, Christa Dichgans, Kiki Kogelnik and Niki de Saint Phalle. Historically, the dominant narrative of Pop Art has typically excluded both women and European artists. Following recent major museum shows, these dynamic artists and their work are finally being recognised retrospectively for their significant contribution to this period.

Visually arresting paintings by Axell, Dichgans and Kogelnik accompany a totemic 1965 ‘Nana' sculpture by Niki de Saint Phalle and together they firmly underline the complex female perspective of Pop concerns. Kogelnik's ‘Miss Universe' of 1964 displays two overlaid silhouettes of a woman rendered in white and green as a yellow leg kicks out with a heeled shoe. A cacophony of colour radiates outwardly from the figure in a celebration of female power.

Contrary to the playful vibrancy of the Pop artists' work, the French designer Maria Pergay completes the presentation with her linear stainless steel and mirrored furniture. Central to the display is a seminal ‘Flying Carpet Daybed', one of her earliest and most innovative stainless steel pieces which was first exhibited in 1968.

The Japanese room explores New Conceptualism and encapsulates the divergent activities of the post-war avant-garde in Japan. Jiro Takamatsu is accompanied by painter and sculptor Aiko Miyawaki; radical photographer Keiji Uematsu; and multi-media visionary Katsuhiro Yamaguchi. Takamatsu's ‘Oneness of Rust' and ‘Slack of Net' explore the singularity and complexity of quotidian materials. Yamaguchi's ‘Lighting Object T' 1967 recalls his earlier work with the Jikken Kobo group (Experimental Workshop) in its performative aspects and engagement with new media.

Miyawaki and Uematsu are shown here for the first time in London despite showing in various venues in Europe and Japan. Miyawaki's pierced and cut brass objects capture her intrigue in light and space and draw a contemporary parallel to Yamaguchi's light sculpture. Uematsu's post-conceptual photograph ‘Wave Motion III' features the artist rippling a piece of rope tied to a tree. The work combines intervention and performance in an exploration of gravity which typifies the progressive photography in Japan in the late 1970s.

The American-Japanese furniture designer George Nakashima is renowned for his woodworking and modern designs. Celebrating the organic expressiveness of wood, Nakashima is here represented by key pieces from the ‘Conoid' series made of black walnut and named after his studio in rural Pennsylvania. The celebration of natural material complements the multi-media aspects of the works on display.

The fourth room, dedicated to Geometric Abstraction in Latin America, has iconic works by Sergio Camargo, Manuel Espinosa, Gego and Franz Weissmann. Stretching across the continent, the avant-garde activities of artists in Buenos Aires, such as Espinosa, were matched in Brazil by the Neo-concretists, including Carmargo and Weissmann, and in Venezuela by Gego and other Constructivist artists. The fundamental concern for all, as illustrated by the drawings, painting, reliefs and sculpture on show, was the materiality of the work of art itself.

Jorge Zalszupin provides the furniture in this room and, like these four artists, found an opportunity to develop his extremely sensual and modern approach to architecture and design in Brazil. Latin America in the 1960s and 1970s proved an ideal place and time for this creative atmosphere to flourish.

‘4 x 4' is a timely exploration of a groundbreaking period in the history of art and design. Bringing together a range of work in a multitude of different media, the exhibition offers new insight into the artistic interchange that took place in this time period over these four continents.

The summer group show is given a classy overhaul in this exhibition.