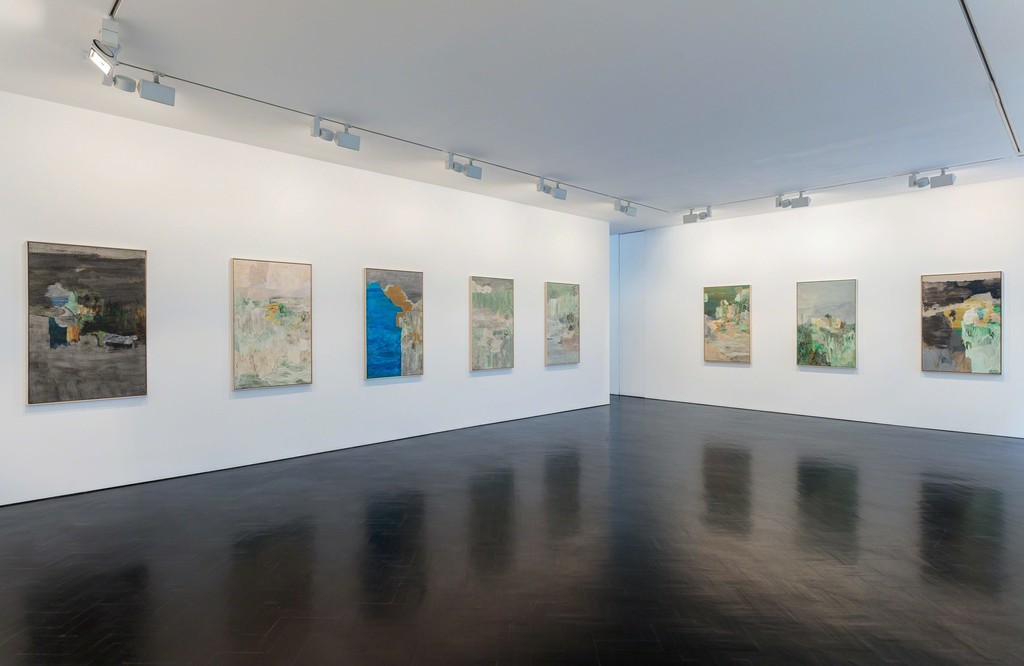 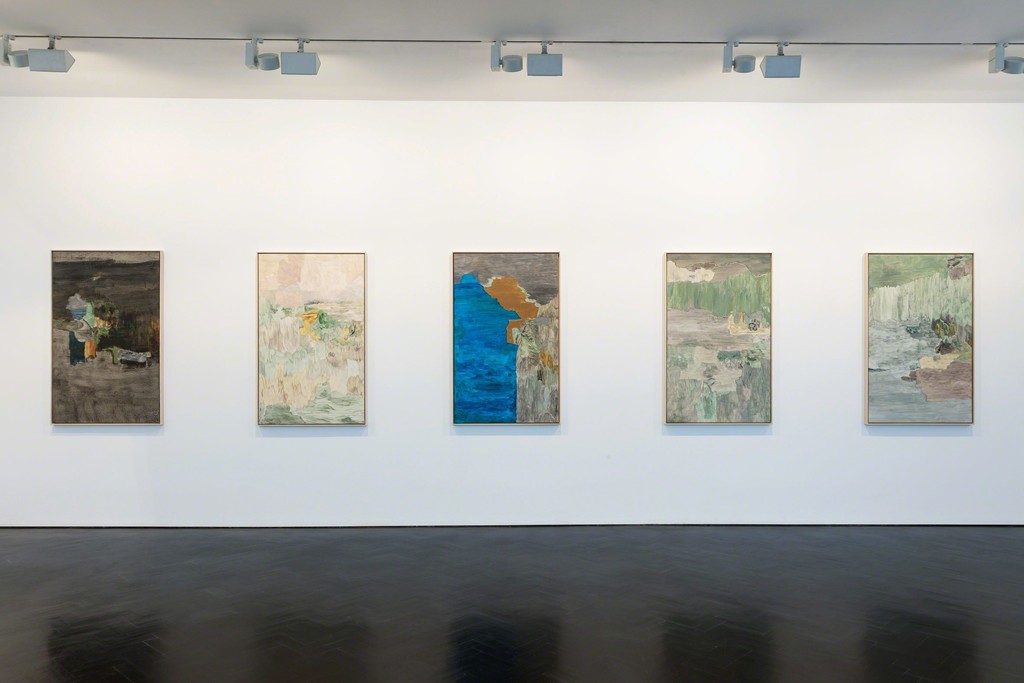 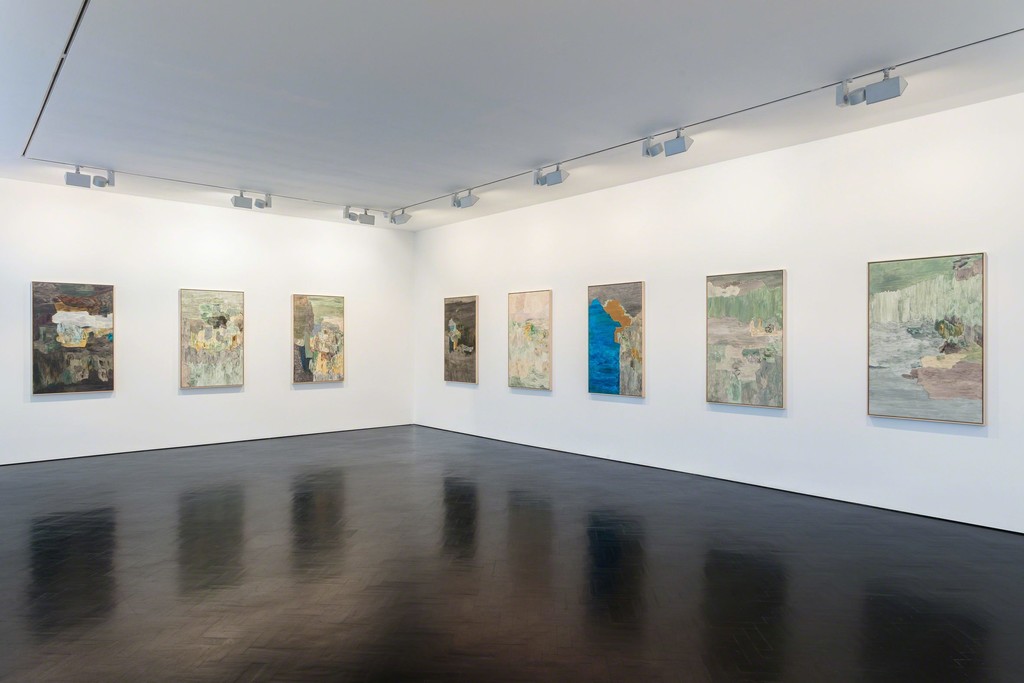 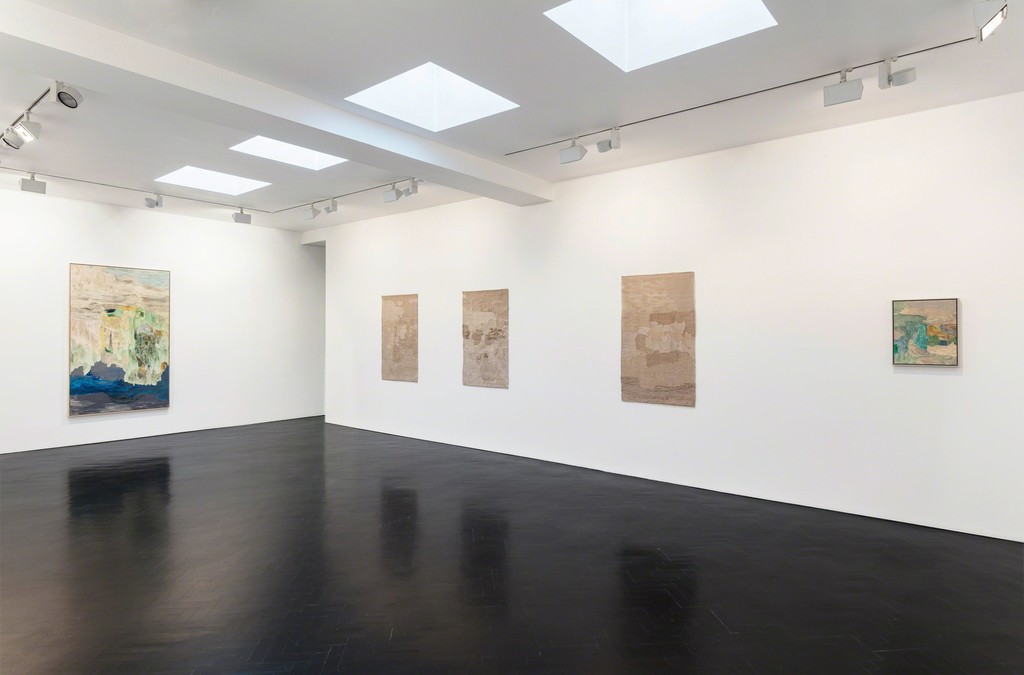 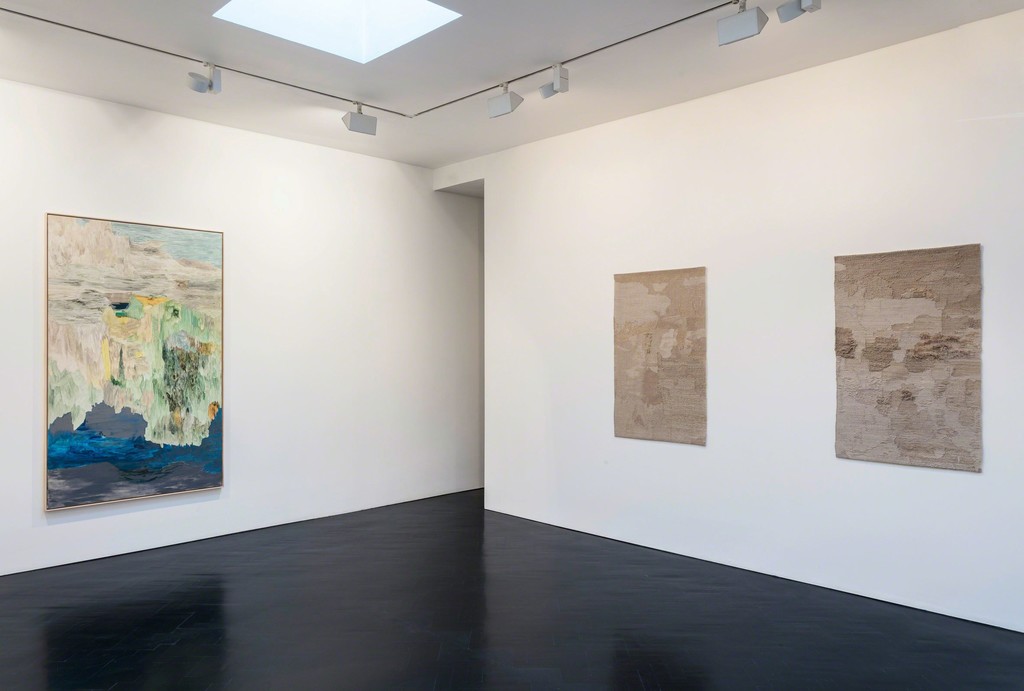 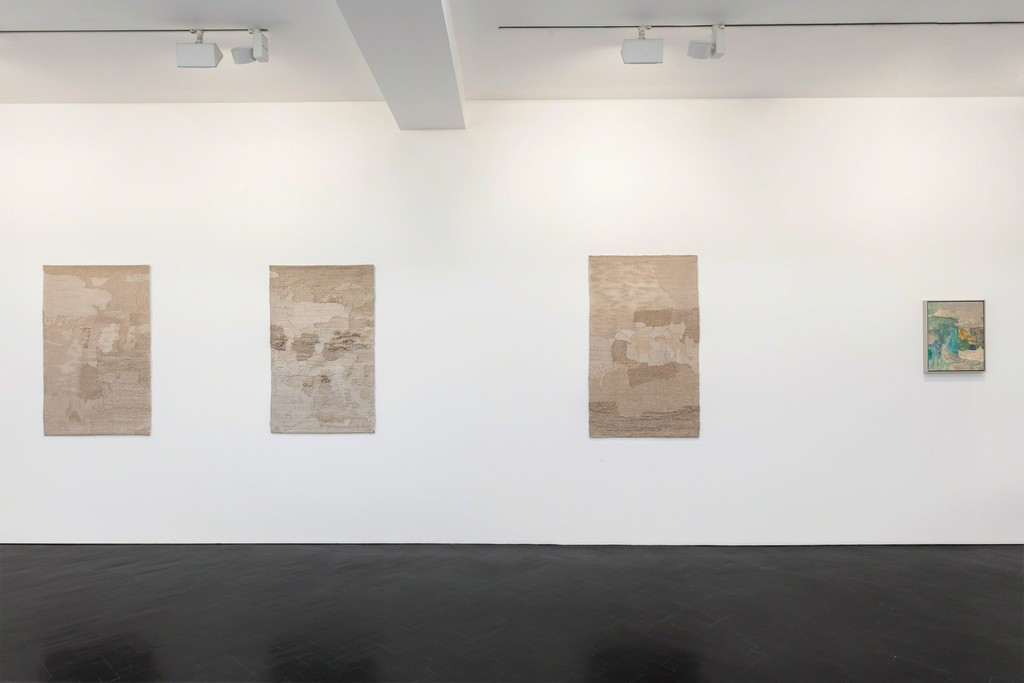 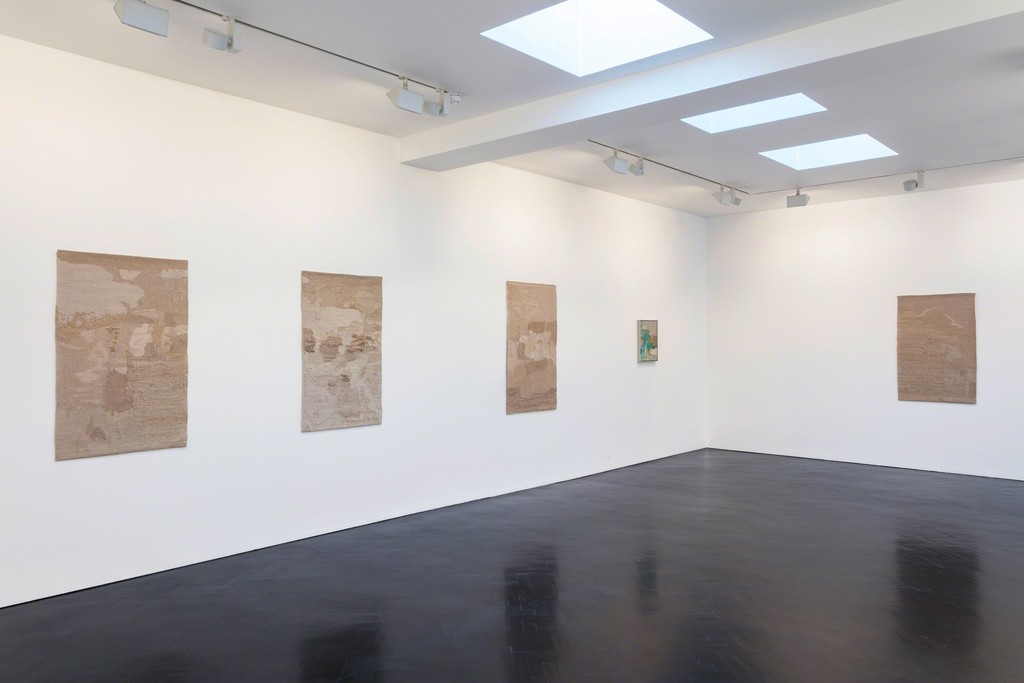 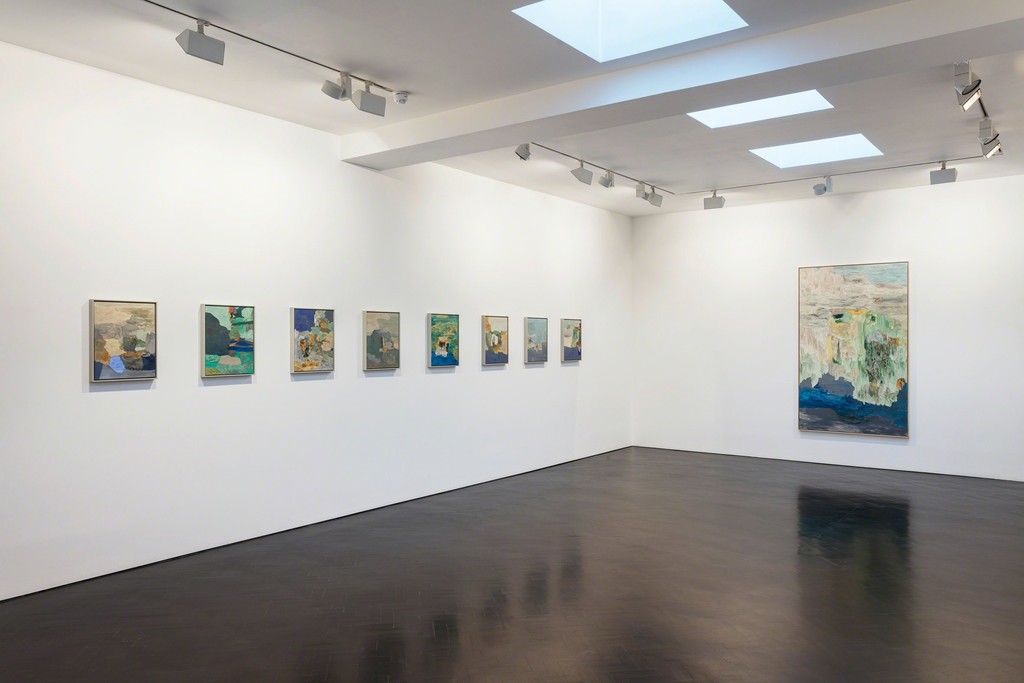 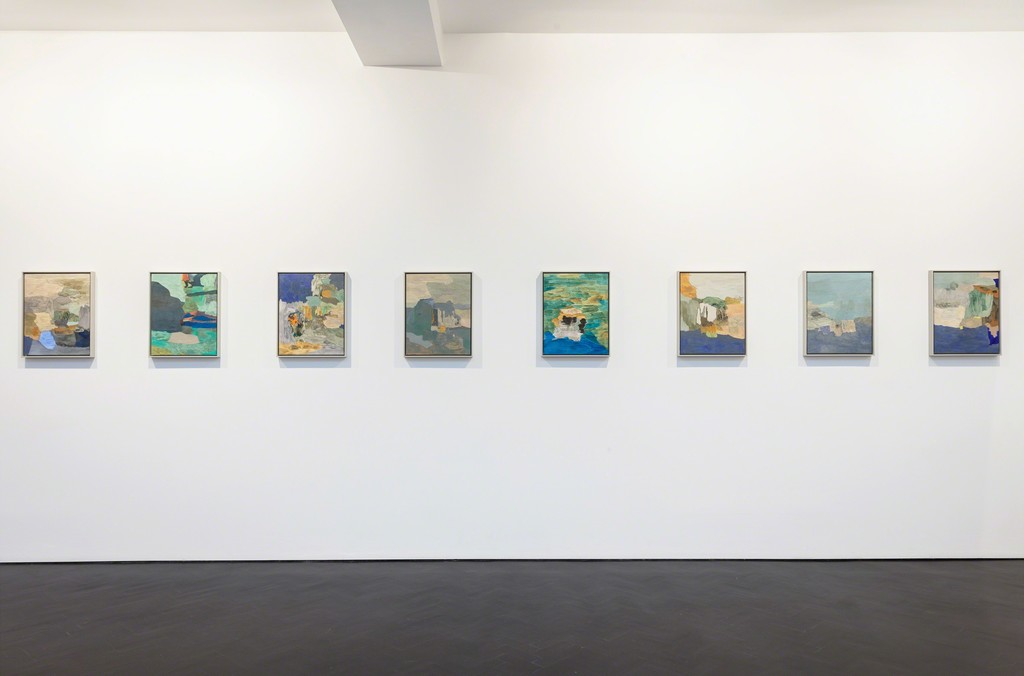 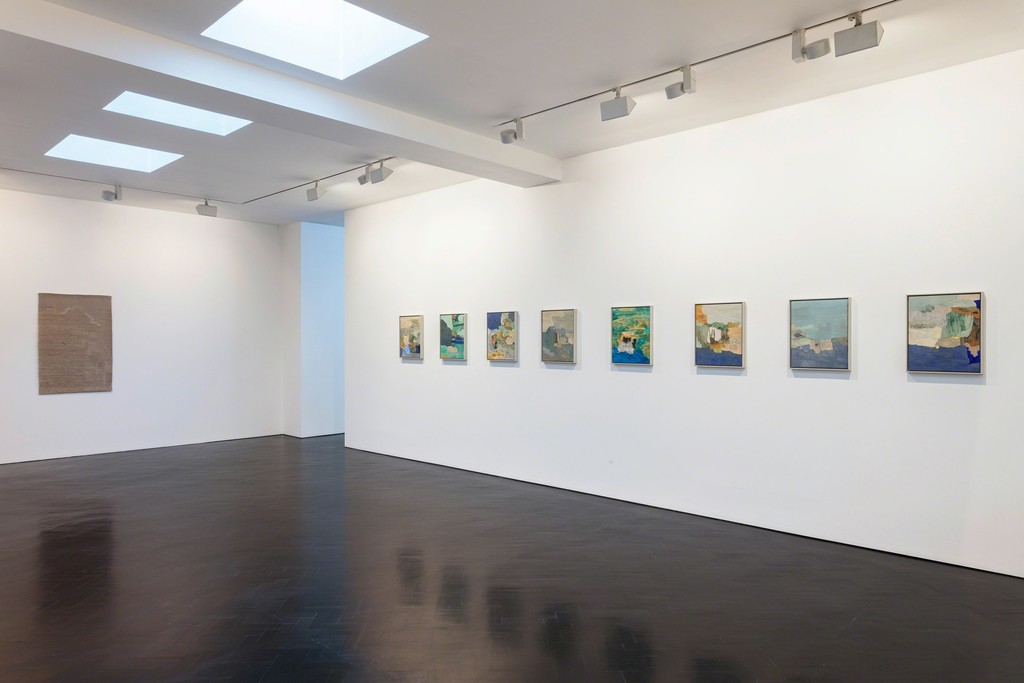 Stephen Friedman Gallery is pleased to present an exhibition of new paintings and tapestries by Swedish artist Andreas Eriksson. The show runs concurrent with a solo presentation at Gothenburg Museum of Art in Sweden, and follows a recent touring European museum retrospective. Eriksson’s second exhibition at the gallery is comprised of two new bodies of work: tapestries woven from untreated Swedish linen and paintings that exude a bold palette of sun-bleached colours. The works create a dramatic window onto the Nordic vista and investigate the relationship between the environment and our experience in it. The title of the show, ‘Röta, bråka, skäkta och häckla’ is Swedish for the four stages of the linen-making process, and is left intentionally abstract for a non-Swedish speaking audience.

Painting and weaving have long been simultaneous activities for Eriksson and in this show he explores the relationship between the two distinct practices. The woven linen used in the tapestries is the same as the linen canvas he paints on and it links the groups of work. Eriksson’s painting has often used layering to create texture, as the pigment is built up or scraped away. Overlays of paint form depths of intense colour and shade. In the same way, the bunching together of the yarn in the weaving forges pools of light in the intricate surface. The tapestries appear painterly, while the paintings become sculptural. Textures, layers and densities are explored to great effect in both media.

For Eriksson the landscape surrounding his home and studio is a starting point and not a subject for direct study. He views nature as a neutral space, into which we can project our own response and sensitivities. This atmospheric meditation denotes a connection to a romantic painterly tradition. Mid-nineteenth century Scandinavian painters were concerned with conveying a distinctly Nordic identity through the painting of their native land, and in doing so demonstrating the link between the people and their country. Eriksson’s paintings and tapestries continue in this vein yet remain separate from it. His dedication to creating a complex textural surface enables him to tread the line between abstraction and figuration.

The tapestries explore the painterly process through the techniques of weaving and embroidery. Here, they are woven in linen for the first time and they are Eriksson’s largest to date. Their scale makes an immediate impression on the viewer while asking them to pause to fully appreciate their detail and depth. Eriksson has been collaborating with local weavers for many years. However, for this project, the artist installed a loom in his own studio allowing him direct involvement in the process. The yarn used is un-dyed. The colours arise naturally, depending on the origin and treatment of the linen. Eriksson sourced the material from multiple sites in Sweden, linking it to the land and its unique geographical location. In a similar evocative manner to the paintings, Eriksson’s tapestries depict a detail as much as they do an entire patchwork vista. Each work takes a section of a painting as a starting point, and then the surface is worked on intuitively so that the tapestry takes on its own form and structure.

Eriksson’s paintings are comprised of gestural overlapping strokes that contrast vertically and horizontally, narrating varying textures while remaining abstract. The works have a hallucinatory effect in their lack of perspective and definition when viewed up close. This interplay of abstraction and figuration places Eriksson’s work alongside that of other painters such as Per Kirkeby, Peter Doig and Albert Oehlen. The azure in ‘Subrosa’ impresses upon the viewer the ice cold of the Swedish terrain, without outlining the forms of the land. The vista is allowed to crystallise in the viewer’s mind, while the strokes on the canvas remain varied, translucent and interpretive.

These new paintings are characterised by a marked change in the artist’s palette. The works have an altogether lighter tone; brighter greens, blues and pinks accompany Eriksson’s signature earthy hues. They depict an intense light on the landscape and envelop us in their rich warmth. Previous series such as the ‘Shadow Paintings’ relied on a dark subdued palette. While the ‘Shadow Paintings’ explored a fleeting moment, these new works seem to convey a sense of time, as if they were left outside in the sun to lighten in its glow. The tapestries, woven with natural yarn, echo this shift to a lighter yet still deeply evocative and reductive use of colour.

Eriksson has said that he paints in order to examine himself, to understand his own thoughts through nature, rather than the other way around. The work invites reflection and interpretation, in a similar way to how Eriksson himself engages with the environment in the process of making the work. The intimate scale and subtle power of these arresting new works call for a meditation on our surroundings, a slowing down in our daily life.

Andreas Eriksson was born in 1975 in Björsäter, Sweden. He lives and works in Medelplana on the south bank of Lake Vänern, Sweden.