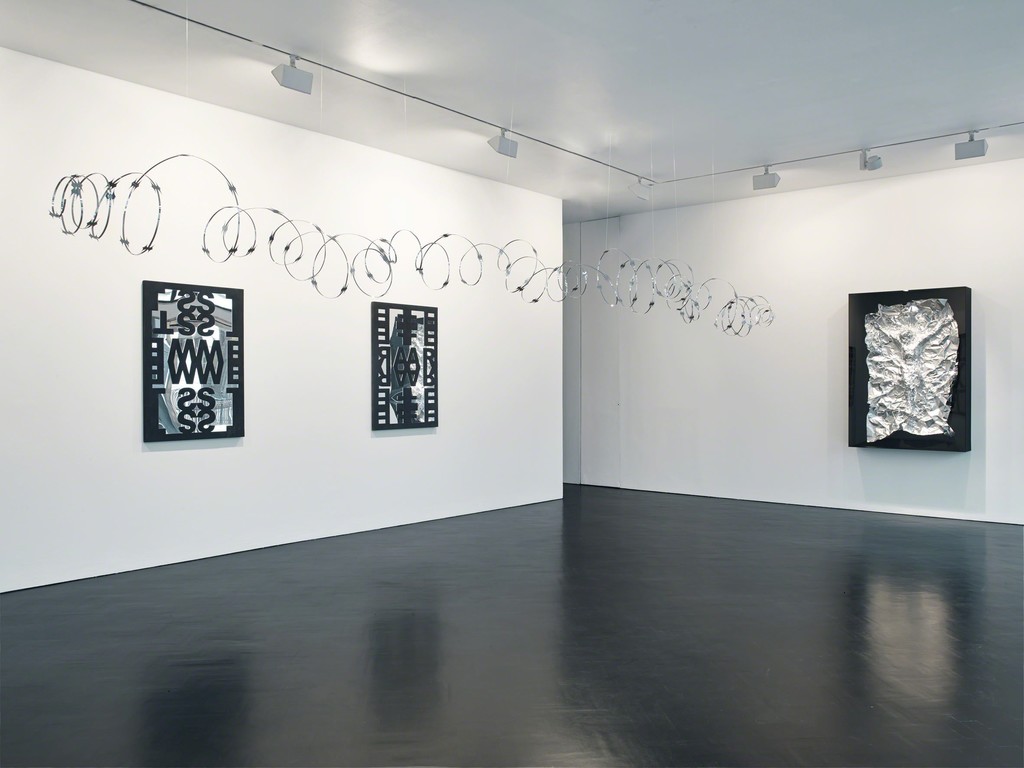 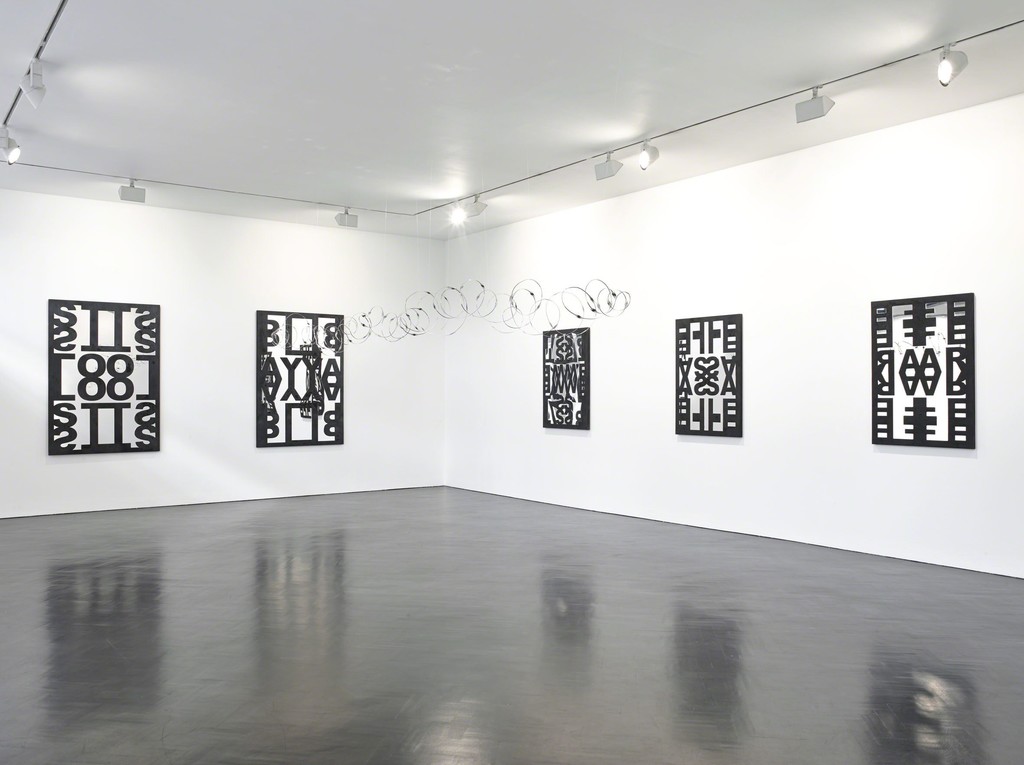 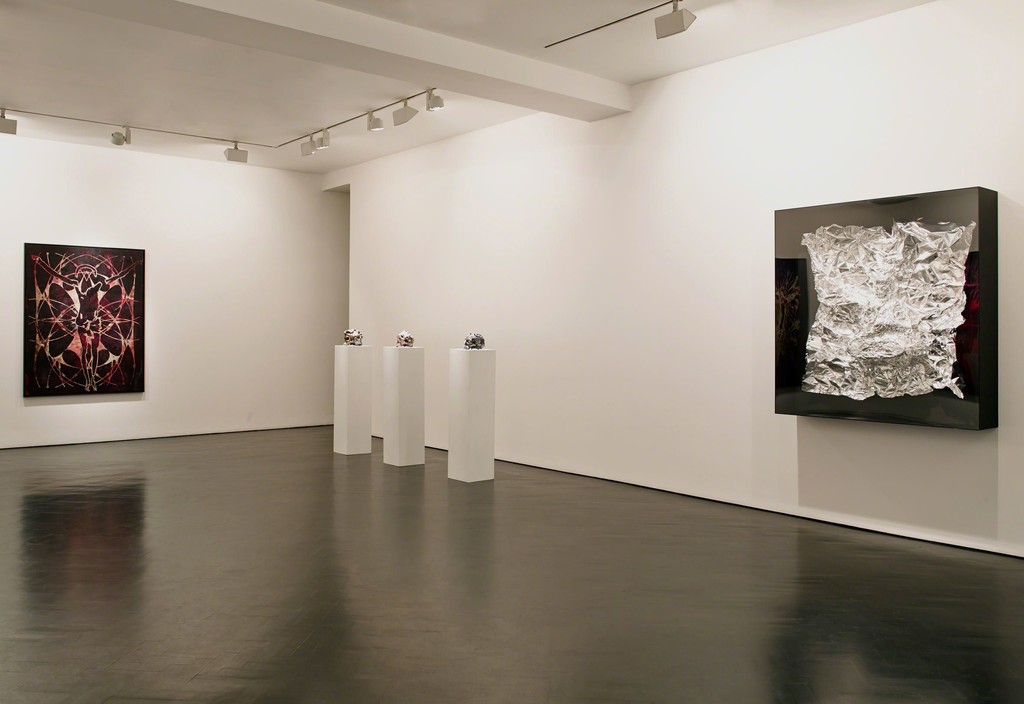 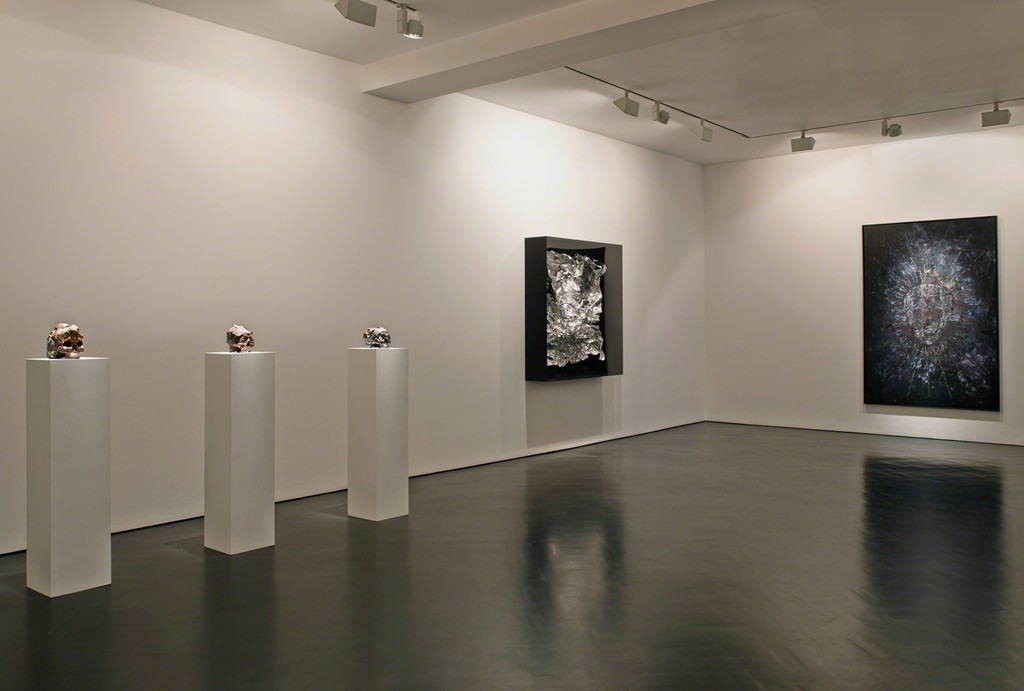 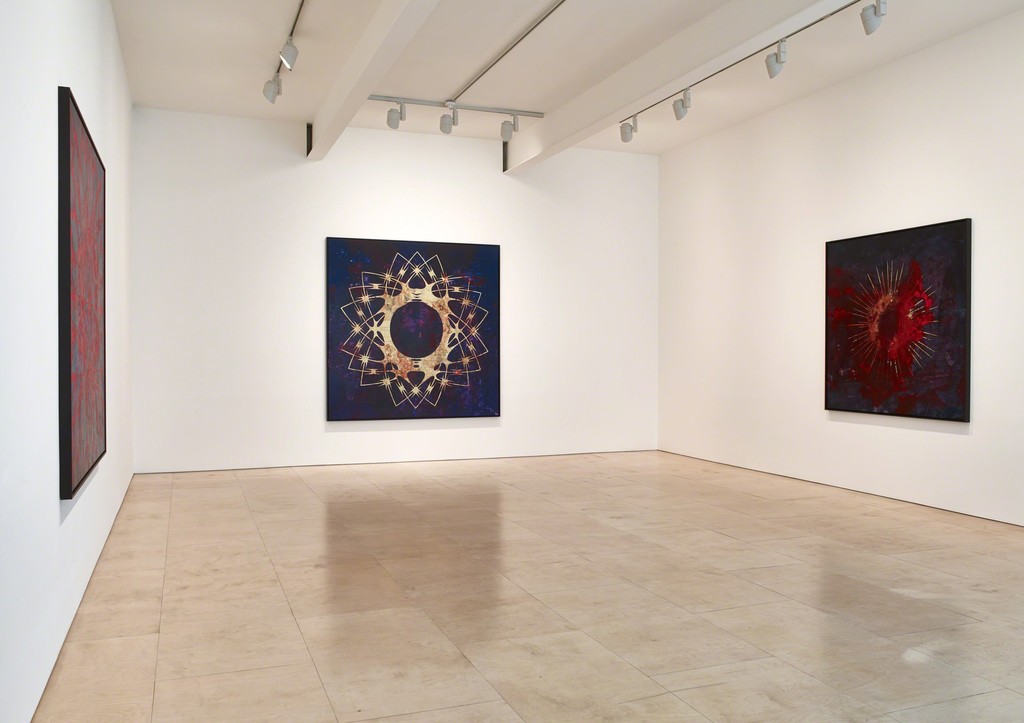 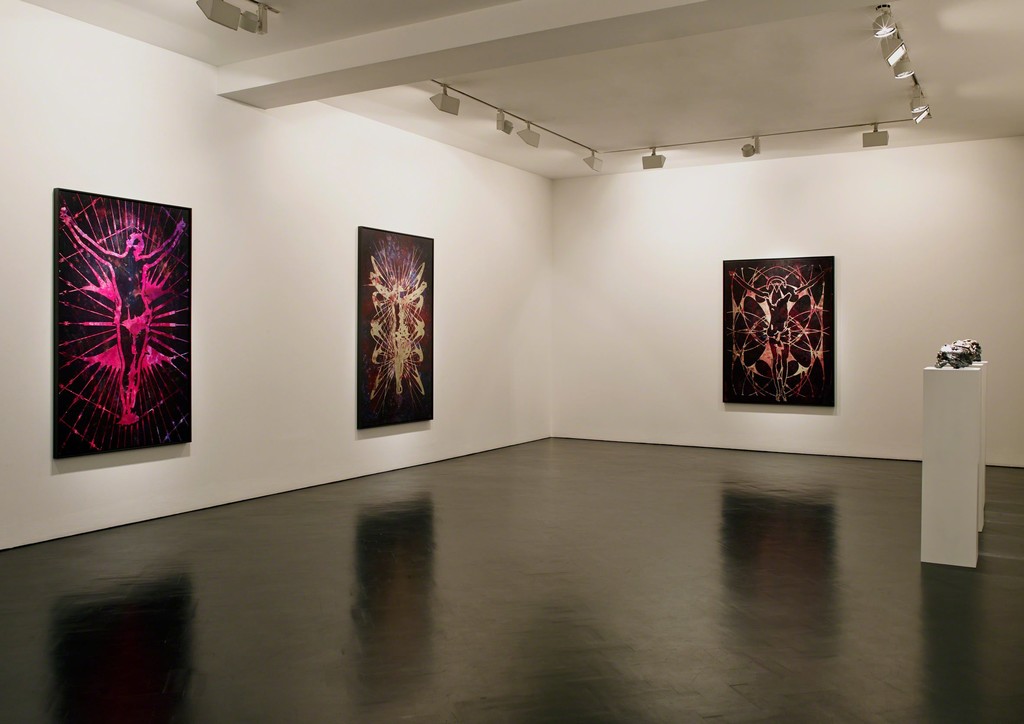 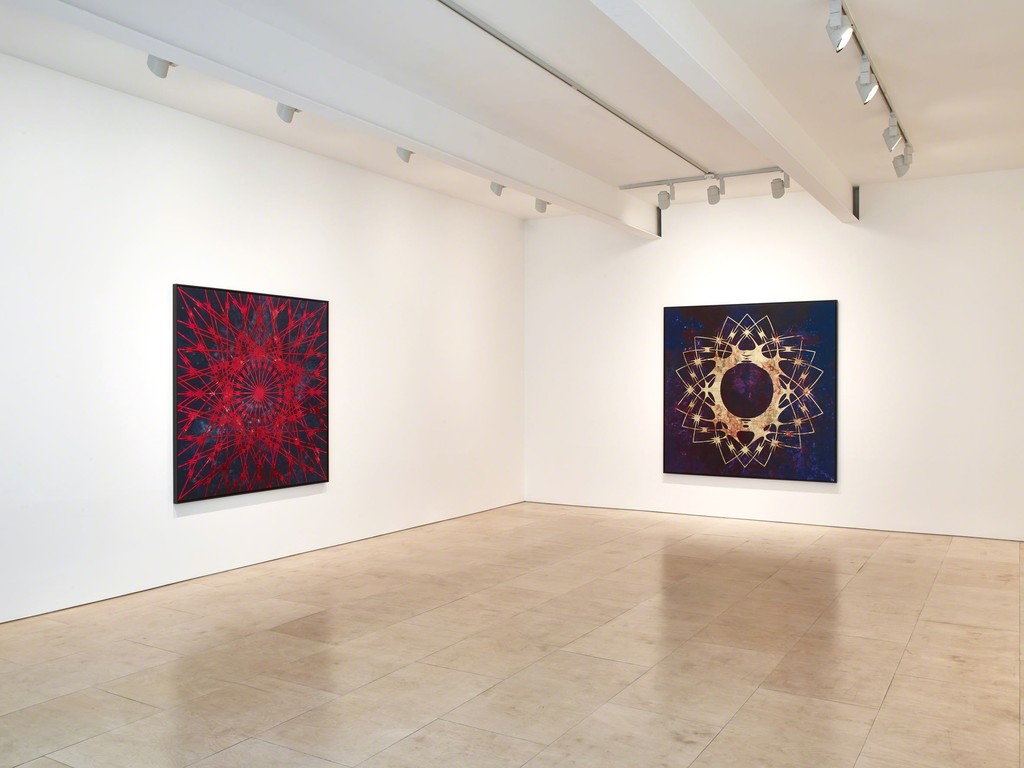 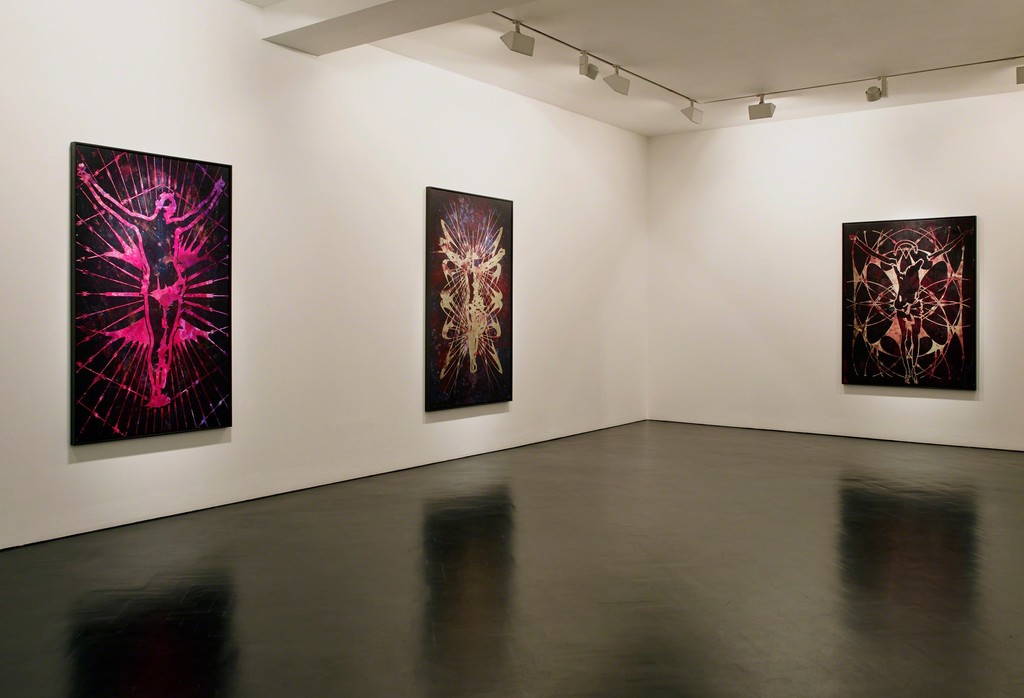 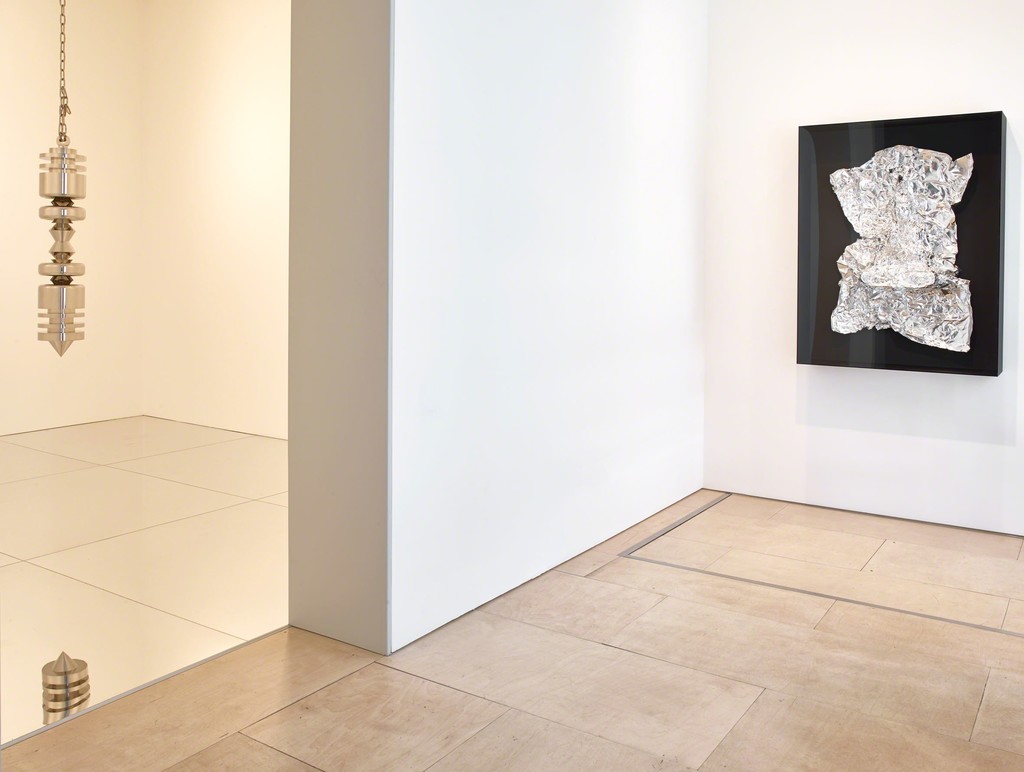 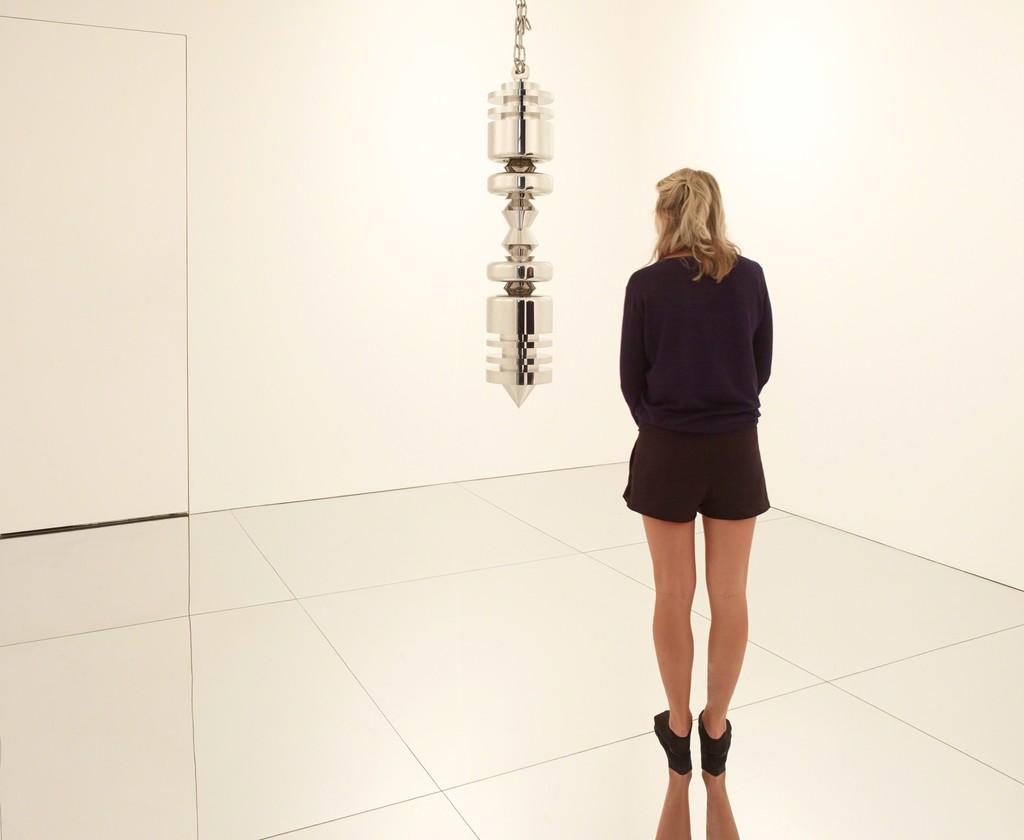 Stephen Friedman Gallery is pleased to present Kendell Geers' fifth exhibition at the gallery which follows his recent major retrospective at the Haus der Kunst in Munich, Germany. Born in South Africa and now living in Belgium, the show's title 'Crossing the Line' recalls both the journey of the artist's cultural heritage crossing the equator and his recent move into painting.
Born into a white working-class Afrikaans family at the height of apartheid, Geers ran away from home at 15 and later changed his name and date of birth, rejecting his roots and reclaiming his identity. While Geers' career has long been defined by the provocative and the political, his more recent works interweave the poetic and address the personal salvation he has found in art. Through painting and sculpture, Geers crosses the borders of media, design, politics and history and transforms the experiences and emblems of his youth into powerful transcendental symbols.

Featured in the exhibition is a new body of work made from razor wire, a material that has been a signature for the artist throughout his career. Geers describes razor wire as 'the sign of my childhood, the symbol of my nation, the curse of my ancestors'. A new series of paintings feature classical iconography entwined with intersecting lines and geometric shapes rendered in gold. Inspired by the Sienese painters from the thirteenth to fifteenth century, Geers interweaves the razor mesh with traditional iconography and abstract forms. The end result is a subtle meditation on the sacred and the profane, a common thread in Geers' work.

In the painting ‘Ligne de Fuite 7487', the crucifixion is rendered in red and gold. While seemingly abstract, the imagery is immediately recognisable. By mixing the paint with gold pigment, the surface is suggestive of rust and alchemy. The paintings take their title from philosopher Gilles Deleuze's concept ‘Ligne de Fuite', developed with Felix Guattari, which relates to the act of fleeing or disappearing into the distance. As such, the lines embedded in these paintings question notions of space, borders, imprisonment and gateways.

A hanging sculpture features an infinite looping representation of razor wire, highly polished in stainless steel and elevated from its fierce undertone. The work relates to Geers' earlier installations like 'T.W. Exported' from 1993, which used razor wire fences to split the gallery in two. With the material sourced directly from a South African security company, 'T.W. Exported' was explicitly political and confrontational. This new work characterises a renewed state of mind for the artist, offering a more contemplative outlook on the hallmarks of his practice.

Geers' unique visual language also continues in a new series entitled ‘Foiled'. These three-dimensional works feature the imprint of a devotional object rendered in aluminium foil. The remaining empty space holds the fragile memory of the original artifact. The work is a reversal on the ‘retablo', a Latin American devotional painting which is commonly painted onto everyday tin sheets. Once considered one of the seven metals of alchemy, and now a modest substance, Geers uses tin to transform these objects into works of great beauty.

Finally, the exhibition features a small group of mirrored reliefs carved into scorched wood. In the negative space now taken by the burnt wood, words such as ‘give' and ‘love' appear in fragmented states and resemble labyrinths. Standing in front of the work, our reflection becomes tessellated. In another room, a hanging sculpture made of polished stainless steel, ‘Monument to the F Word X', is presented above a mirrored floor. Walking into the space, images are shattered and re-built.

‘Crossing the Line' presents a powerful and poetic new direction for the artist's work. Simultaneously captivating and unnerving, Geers' continues to push the boundaries of his practice while questioning our preconceptions of contemporary and traditional iconography.