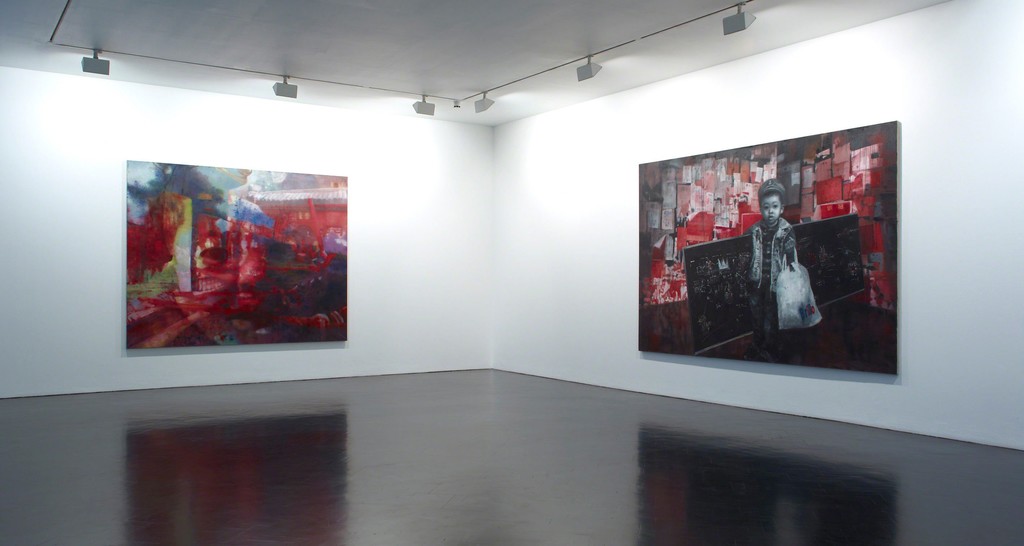 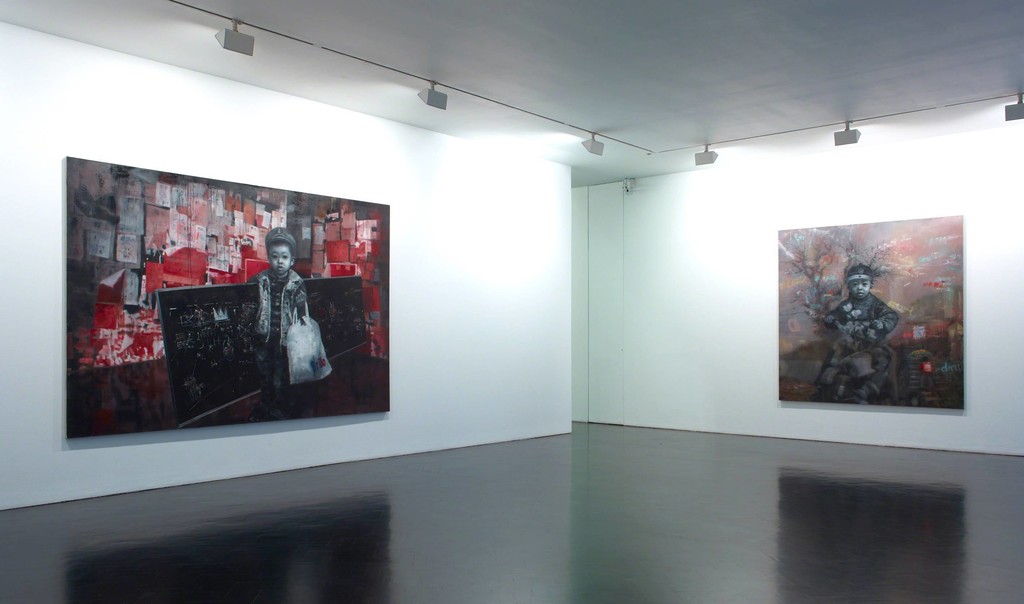 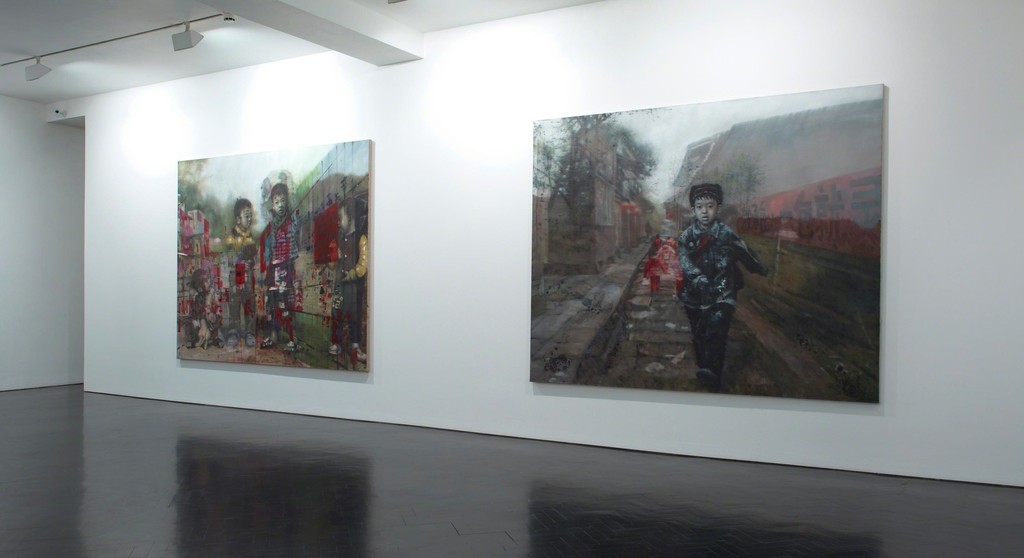 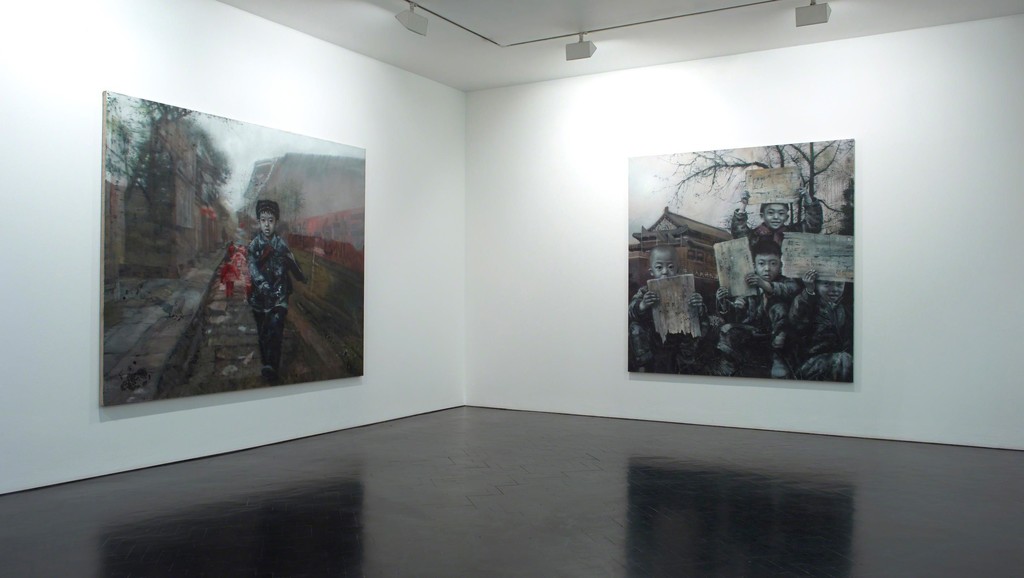 Stephen Friedman Gallery is delighted to announce the first exhibition in the UK by Chinese-born artist Li Tianbing, critically acclaimed as one of the leading painters of his generation.
Presented here will be eight new large-scale paintings that continue the artist's ongoing exploration into life as a child growing up in China. The paintings form part of a semi-biographical series depicting a unique and provocative portrait of the enduring legacy of China's one-child rule. Introduced in 1979, just five years after Li Tianbing was born, this decree continues to pervade contemporary Chinese life and is questioned on a global scale. Li Tianbing's paintings, a beautiful fusion of portraiture and abstraction, are a thought-provoking articulation of the human consequence of such legislation.

Born in 1974, in the southern city of Guilin, China, Li Tianbing moved to Paris at the age of 22 to study at the Ecole des Beaux-Arts. Here he came in contact with a wealth of visual and cultural resources and formal histories. Surrounded by such diversity, Li Tianbing quickly developed a distinctive visual language with which to express his own cultural origins. This draws on both traditional Chinese techniques and contemporary Western references. His work was soon commanding a similar level of international attention afforded to elder contemporaries such as Zhang Huan and Yan Pei Ming.

When Li Tianbing arrived in Paris he had with him a tiny album of just five small, black and white photographs of himself as a young boy. To have childhood photographs of oneself was a privilege in 1970s China. A family-owned camera was a rare and expensive commodity and so children's formative years went largely unrecorded. Li Tianbing's father worked as a soldier in the army's propaganda unit and was able to intermittently borrow a camera to record his son's infancy at the ages of three, four and five years old. These images have come to play an integral role in Li Tianbing's work.

Being an only child in China was a condition shared by many children of his generation, and one the artist has described as a deeply lonely experience with profound psychological effects. Consequently, the artist often sought refuge in his own imagination, inventing games inhabited by fictitious characters.

This compelling biography informs Li Tianbing's poetic childhood portraits and we see it in its most vivid expression in 2006 with the introduction of an imagined brother to his painterly repertoire. Later works depict the artist accompanied by a host of brothers and playmates, which have come to form a complete yet entirely ‘imagined' family album. On a personal level the paintings offer an intimate portrait of a fantasized childhood, where fiction and fantasy seamlessly merge. On a far wider reaching scale, the work articulates the shared loss of a generation who grew up under an authoritative dictate exercised at its most personal level.

Referring back to the monochrome palette of his small photographic archive, Li Tianbing paints himself and his illusory characters in a palette of dramatic greys and sets them within scenes that evoke China's past and present, its pastoral idylls and commercialized city sprawls. In his new painting Recruitment (pictured) four children are shown in ragged clothing in a rural setting, each holding up an information pamphlet as if posing for a Communist party-line photo. Like many of Li Tianbing's paintings, the work is pock-marked with black ink-like stains - a reference to photos the artist once saw of the Khmer Rouge, whose deteriorating surfaces convey a haunting connection to an obliterated past. This stain motif is used time and time again as a reminder of the corrosive power of political dictates and is a haunting yet powerful motif.

Other cultural signifiers of China's recent history are presented within his recent and more colourful painting Don't Touch My Dog, where a group of boys stand holding their toy dogs, a reminder that for a long time Chinese children hardly ever owned toys. Here, three settings are interposed - the children's narrative, a crop of beautifully rendered trees, and a commercialized city backdrop whose surface is scarred and saturated with pops of bleeding colour. The scene is expertly executed and technically brilliant, juxtaposing traits of Hyper-realism and Abstraction and a visual depth of field more commonly associated with photography.

Of the artist, Stephen Friedman says: "I was introduced to Li Tianbing's work through Pearl Lam and I was immediately struck by its power and beauty. I think he is one of the most exciting figurative painters of his generation."

Li Tianbing's new paintings at Stephen Friedman Gallery continue the artist's dialogue with his childhood and the country of his birth, and present a remarkable portrait of China's legacy from its fairly recent position as a poor and isolated nation to the economic global powerhouse it is today.

A fully illustrated catalogue accompanies the exhibition, which will include an in-depth essay by Dr Katie Hill.