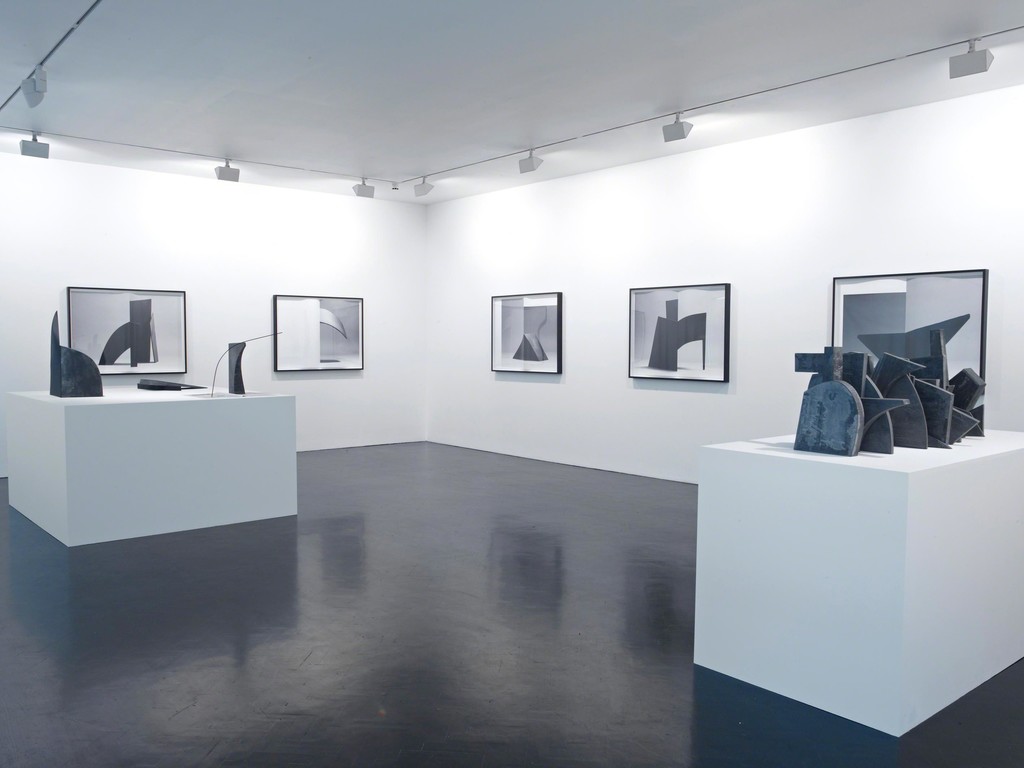 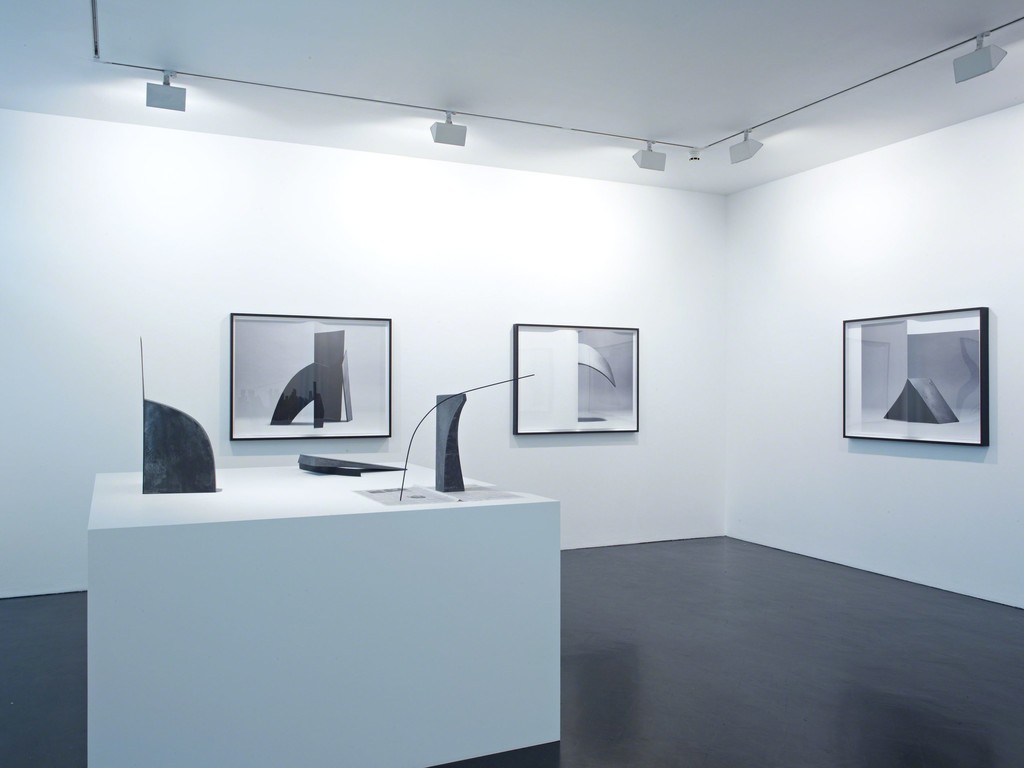 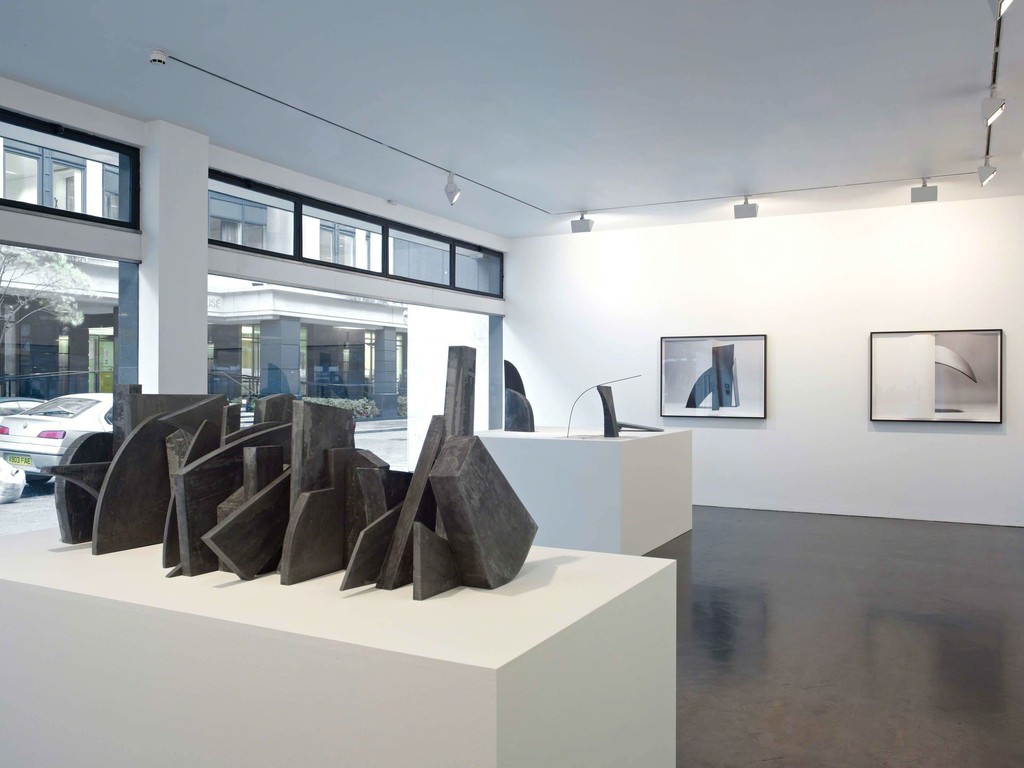 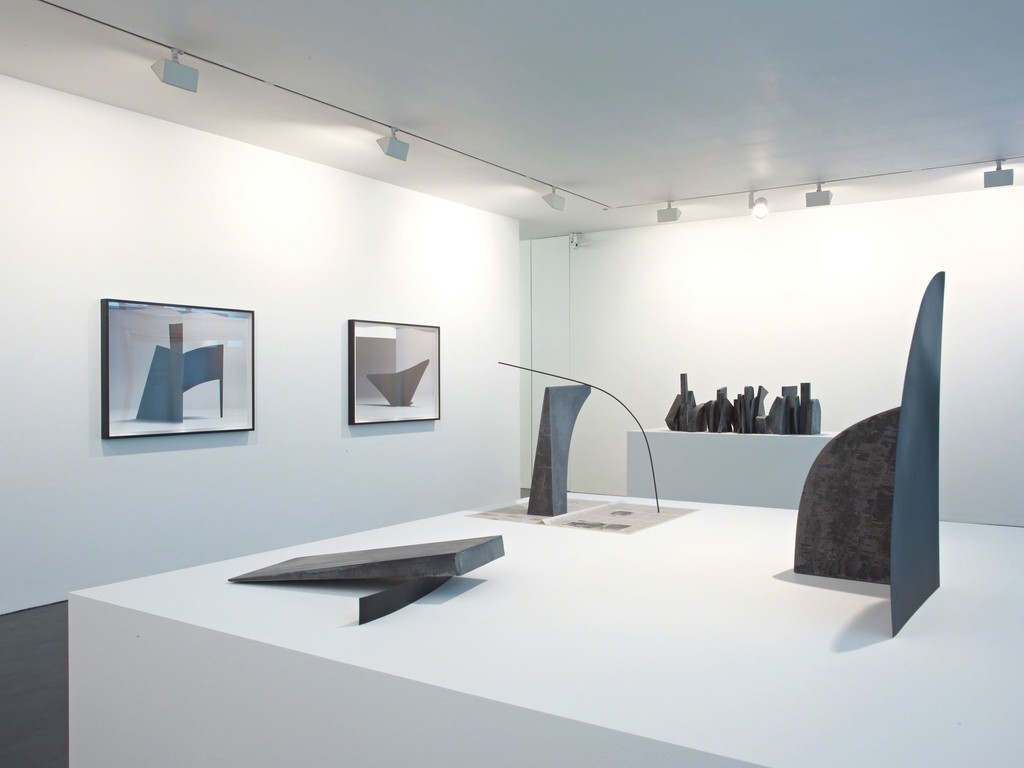 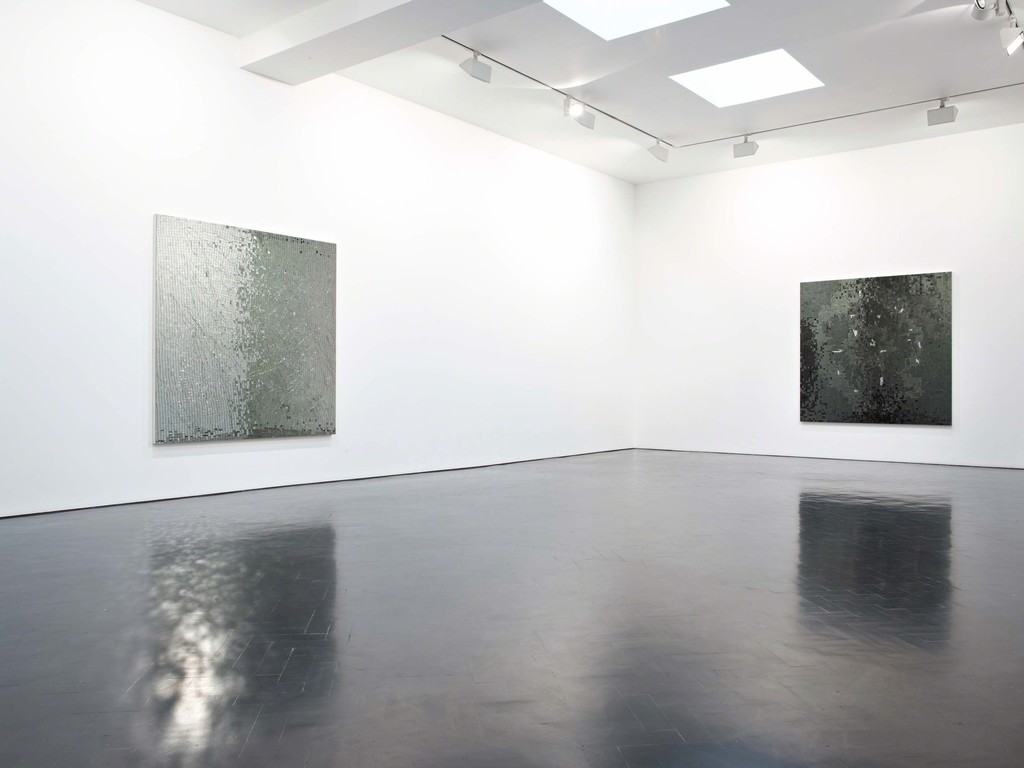 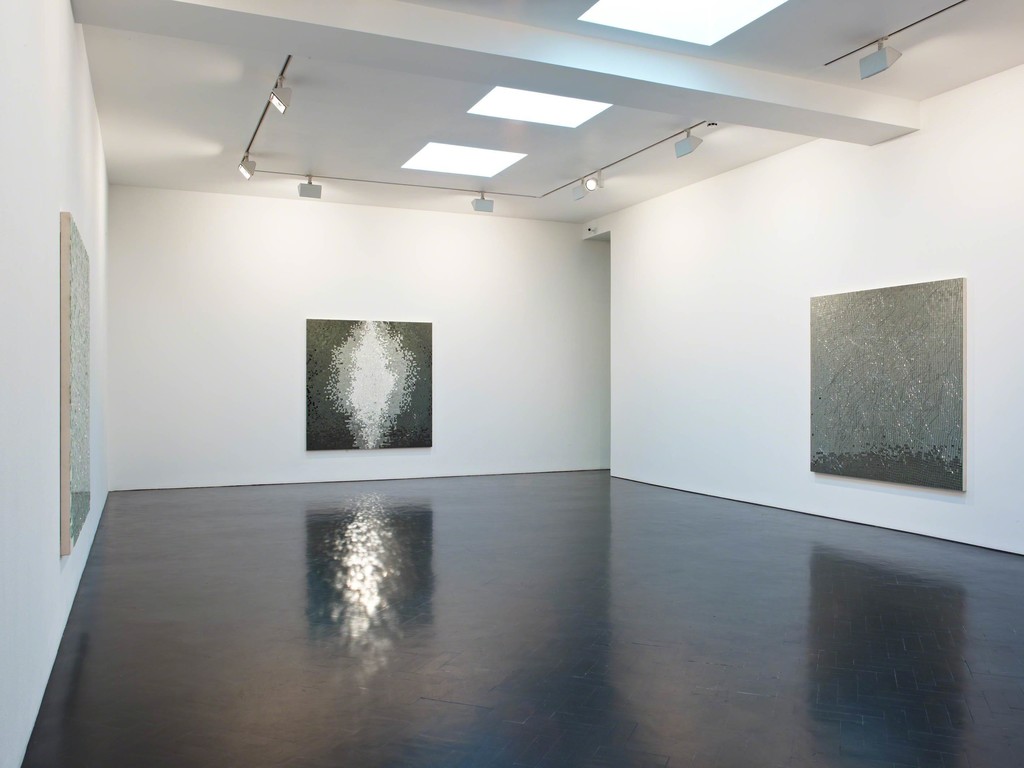 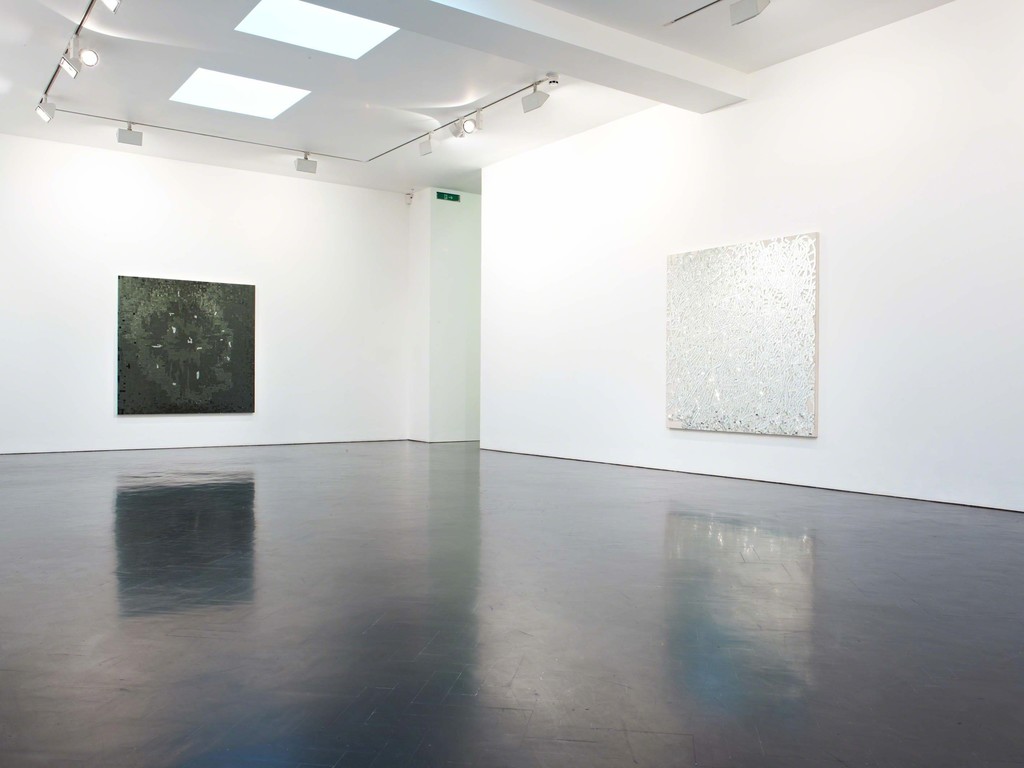 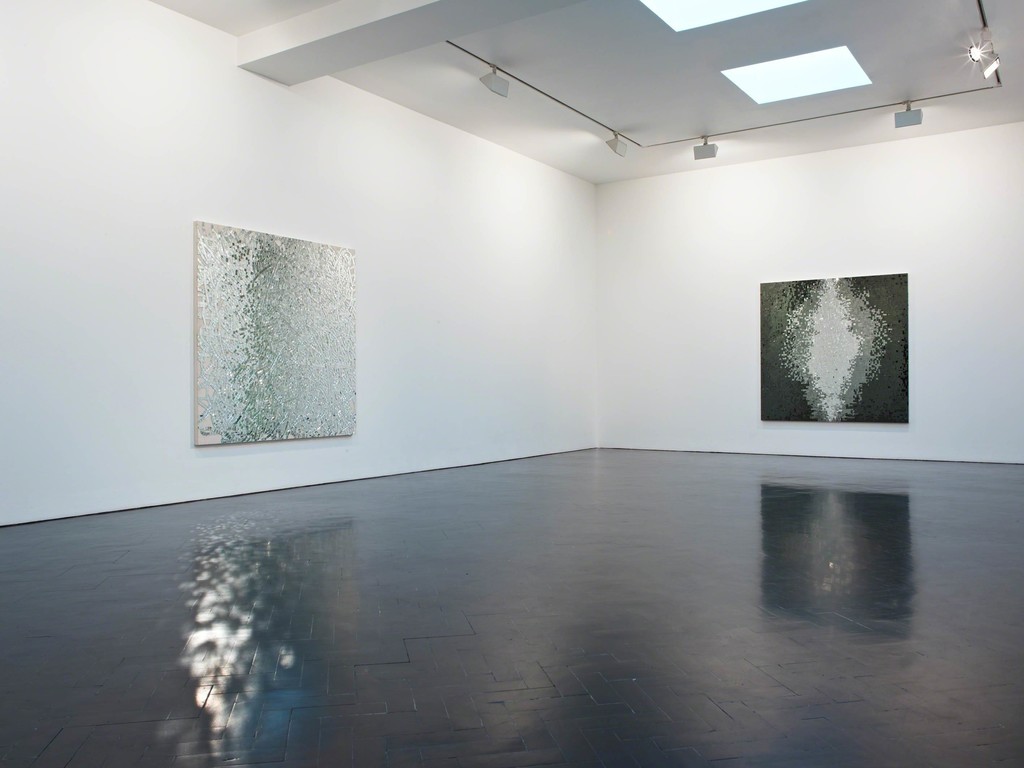 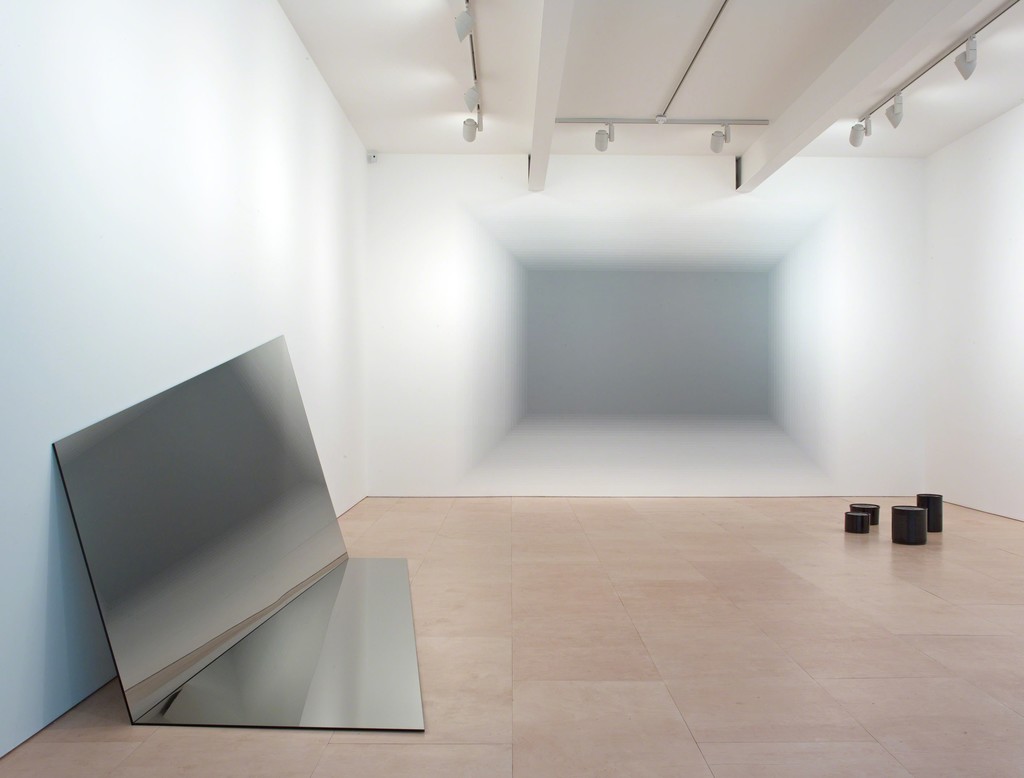 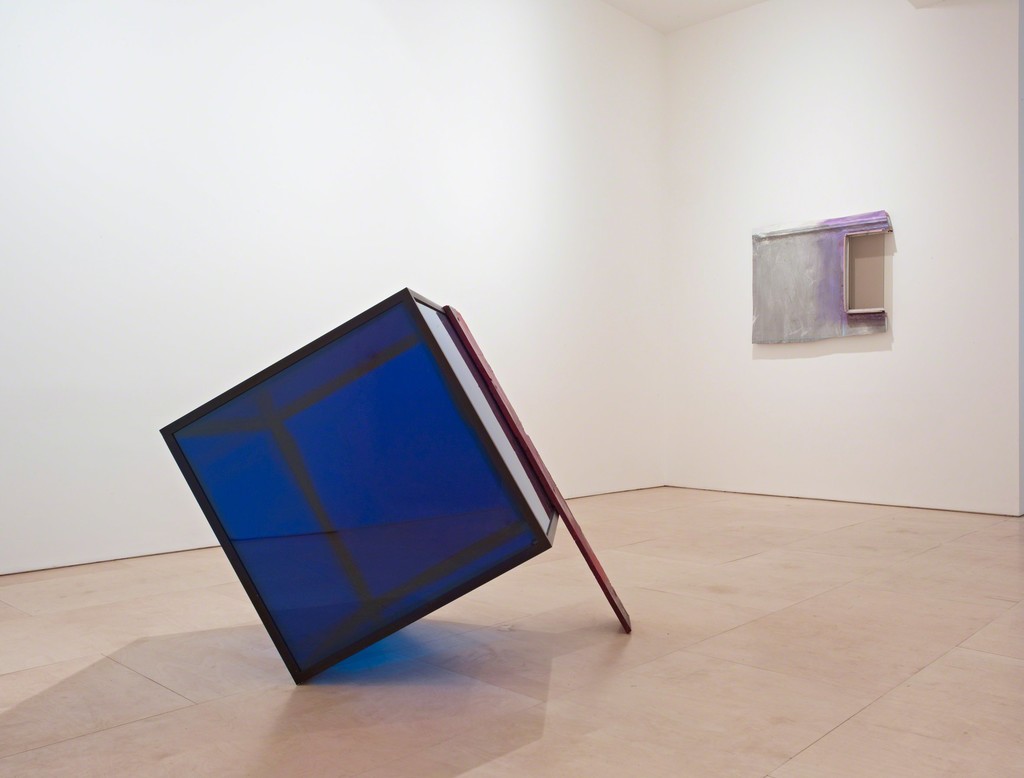 Stephen Friedman Gallery is delighted to announce its summer exhibition, Shapeshift, a group presentation in two gallery spaces. The exhibition brings together the work of four contemporary artists: Sarah Braman, Iran do Espirito Santo, Jim Hodges and Erin Shirreff. Although diverse in their formal undertakings, these four artists are united in the subtle, powerful and poetic ways in which they handle their chosen materials.
The power of transformation - or, the very point at which one entity shifts its mode of existence and becomes another - is the underlying theme in this exhibition. Whether this be transforming one's perception in Espirito Santo's all-engulfing wall drawings, or even transforming one's image in Hodge's mosaic mirrors, each of the artists shown here uses this powerful skill to tantalizing effect.

Jim Hodges returns to the gallery for the fourth time presenting four new mirrors in a series entitled 'The Betweens' (2012). Each of the five foot square canvases are covered in a multitude of hand-cut mosaic glass squares that vary in tone from silver to grey to black. Random patterns and shapes emerge as these colours collide on the canvas. Installed as paintings in one room, these mirrors reflect and refract light and the surrounding environment. In their fractured surfaces, images multiply.

Hodges first used mirror in his work in 1996, when he smashed the back of a supported reflective glass to create a web of lines on the shattered front. The medium has been a recurring presence in the artist's practice ever since and is a keen illustration of his powerful ability to transform the ubiquitous into something unique and enduring. When presented with one's own fractured reflection in these tessellated surfaces, the works are completed. As such, Hodges' fascination with self-reflection and personal history comes full circle in this new series.

Joining Hodges is American artist Erin Shirreff who presents four sculptures and a five-part photographic work. 'Untitled (Standing Shadows)' (2012) is a large, black abstract monument made in pigmented plaster. Formed from twenty-nine individual components stacked against one another, the whole resembles a row of books, or an archive of casts. These enticing forms bear the traces of their production including fingerprints and indentations. The undulating horizon line of this rhythmic sculpture stands above juxtaposed geometries and their accompanying silhouettes.

In 'Monograph (no.2)' (2012) Shirreff presents five archival pigment prints in individual frames. Each print has a centre fold, which either rests on the mount or protrudes towards the glass, resembling a page from a book or a folded leaf of newspaper. The photographed subjects resemble the sculptural forms: abstract, dark and geometrically challenging. There is a constant dialogue between photography and sculpture throughout Shirreff's work. The objects are presented at a remove from their original function, bringing to the fore their unwavering form.

In another gallery, American born artist Sarah Braman presents two works that exploit the potential of the found object; in this case, that of the iconic American vehicle, the camper van. 'Our Morning (Summer)' (2012) combines scrap panels from old vehicles to create a sharp Minimalist volume in striking juxtaposition with the soft lilac and grey tinted pastel colours painted atop. 'I Can't Seem To Drink You Off My Mind' (2012) combines plexiglass and aluminium in an off-kilter cube, which balances on the floor.

Braman has stated before that the layering of colour upon plexiglass is very much linked to the feeling of being contained within a car, observing the reflections on the windows and the exterior world moving past. Under her hand, found materials are wilfully transformed and shared memories of both voyage and home are evoked.

Alongside Braman, Brazilian artist Iran do Espirito Santo presents a series of works that further question the expected structures of art and its boundaries with the audience. 'Untitled' (2012) is a large-scale site-specific painting spanning the entire back-wall of the gallery. Appearing as a mirage of mechanical brushstrokes applied in graduating grey, the painting creates a subtle optical illusion as the colours dissolve into the gallery walls and manipulate our trust in its structure. By instigating a play of depth that amalgamates natural light in a three-dimensional space, Espirito Santo transforms the way we experience the work, creating a complex conceptual interplay.

Alongside this site-specific work, the sculpture 'Untitled (Folded Mirror) 5' (2011) sharply bends against the floor and the wall reflecting and transforming our approach. Featuring mirrored glass, the sculpture appears to be bent in half, simultaneously reflecting and refracting the light and space around it. In turn, both works act as interventions of the traditional gallery space. Through the artworks' unconventional and illusionist materials, the artist turns alchemist as forms melt, dissolve and reappear out of the white cube.

Shapeshift marks a poignant interception of artists who are exploring form and function in a myriad of materials. In the four gallery spaces, each work metamorphoses and shapeshifts, simultaneously critiquing and playing with our perceptions of how we see ourselves and how we look at art.