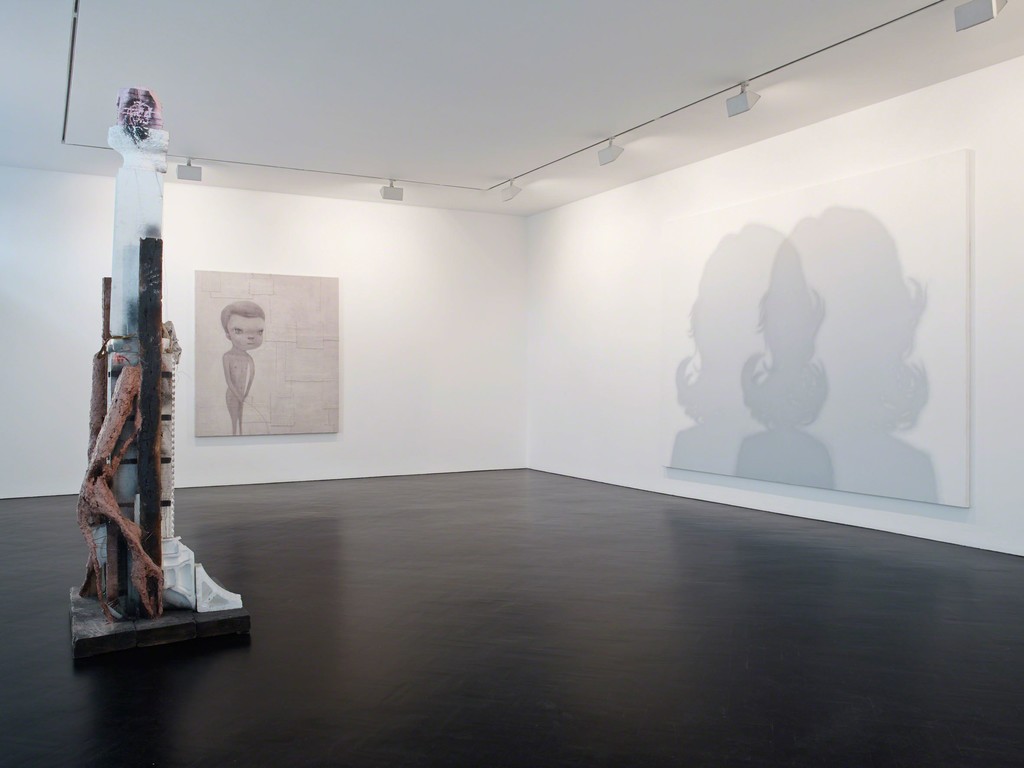 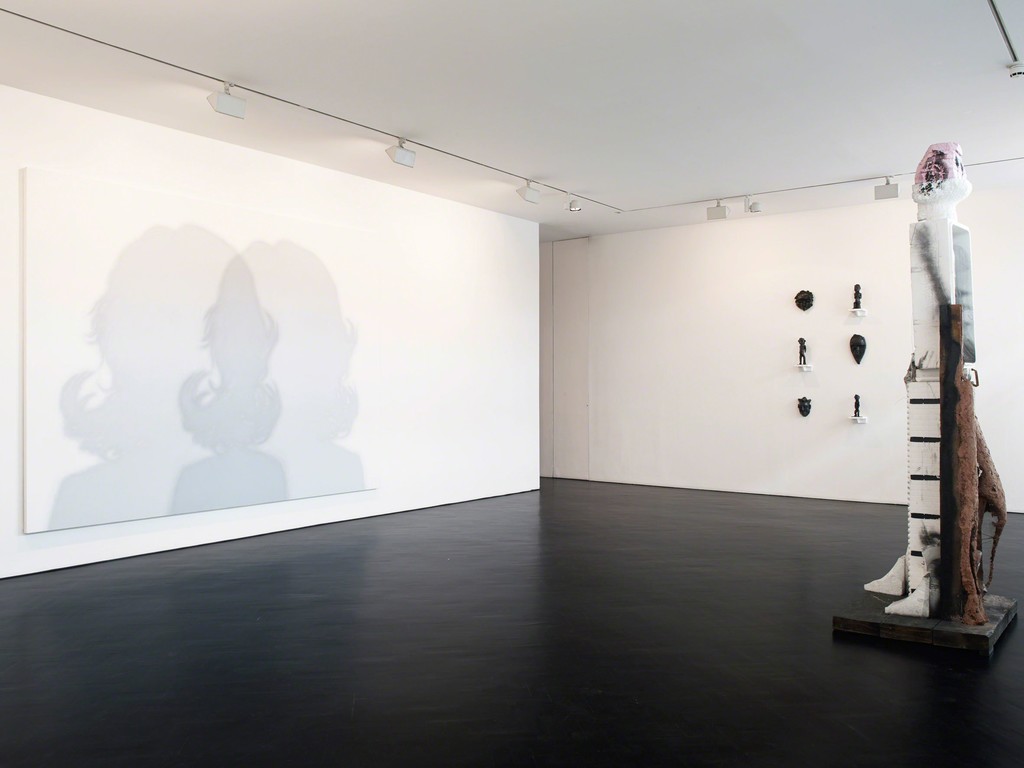 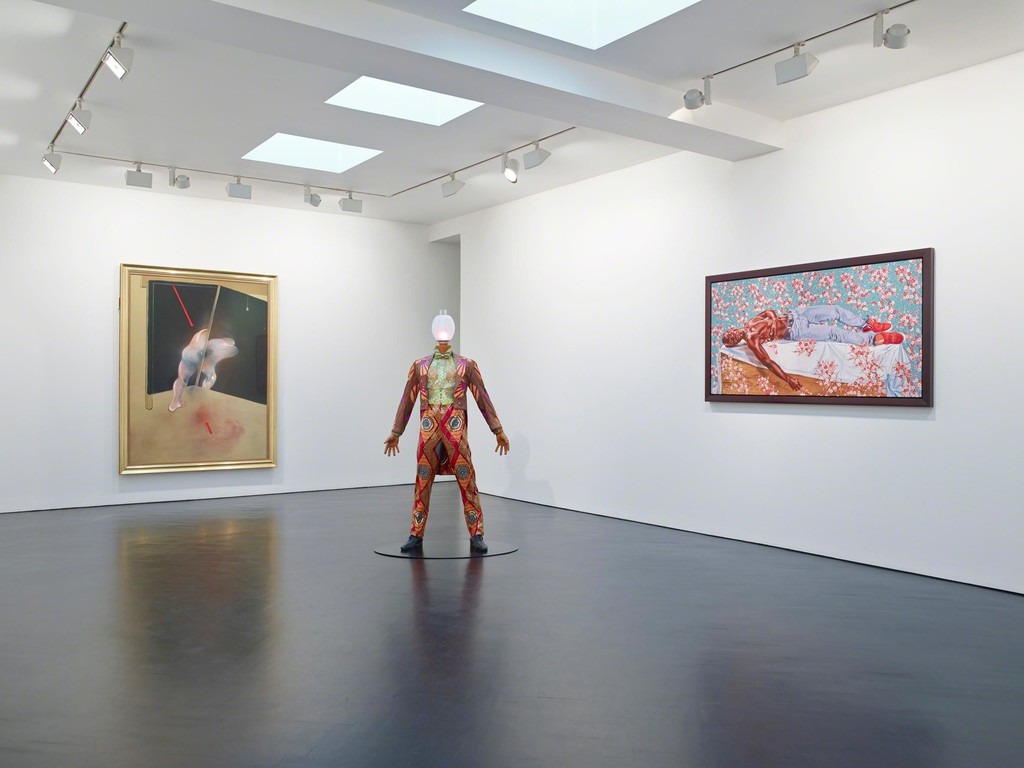 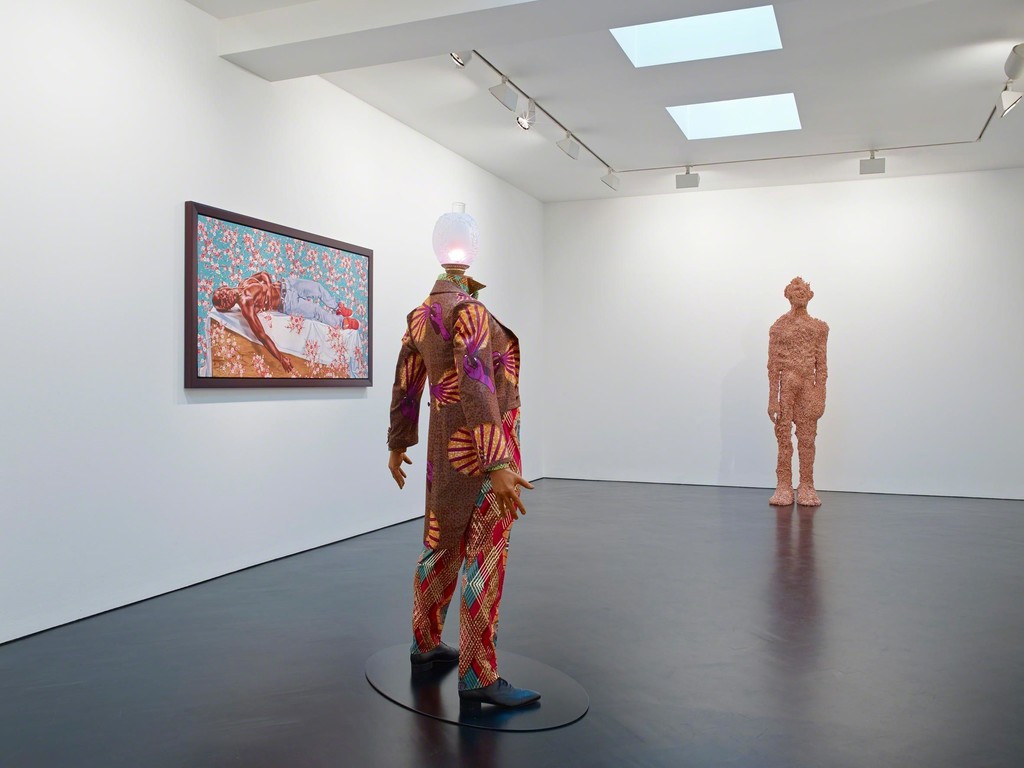 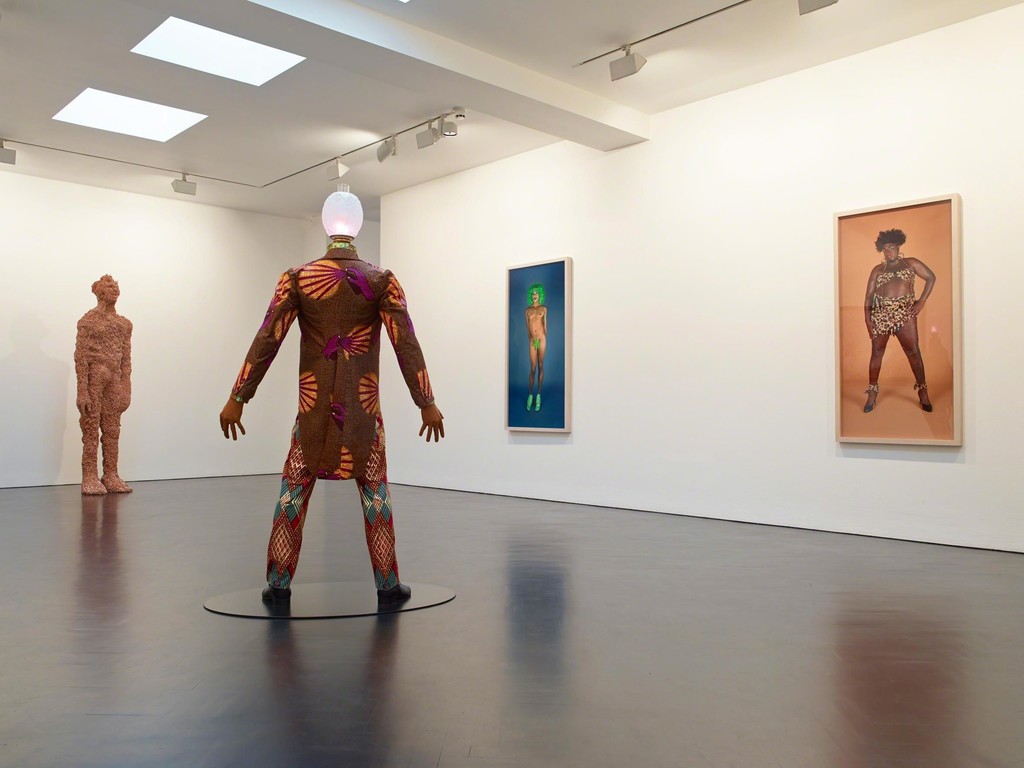 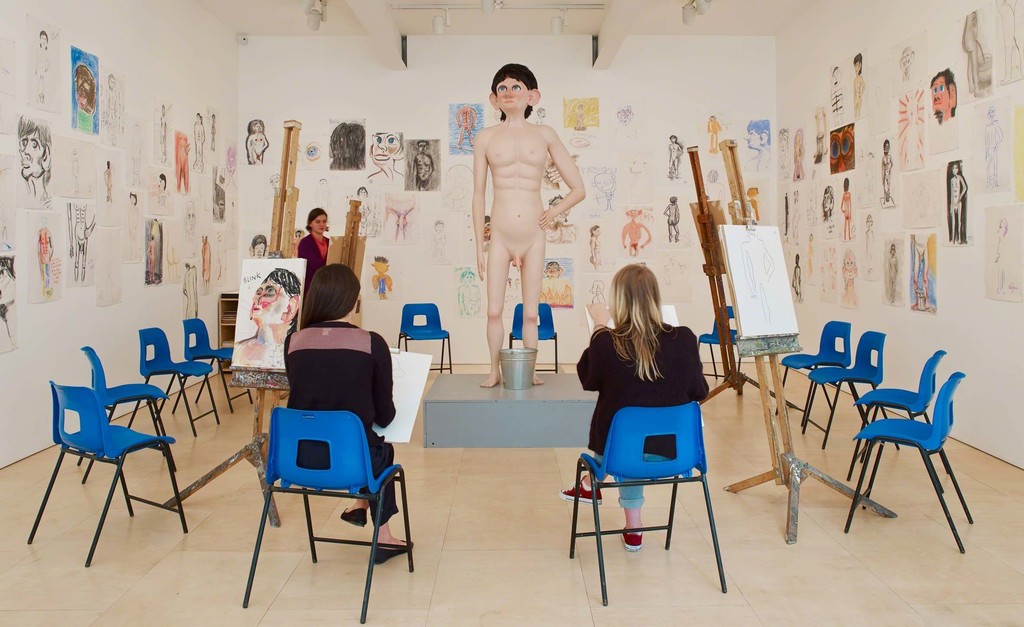 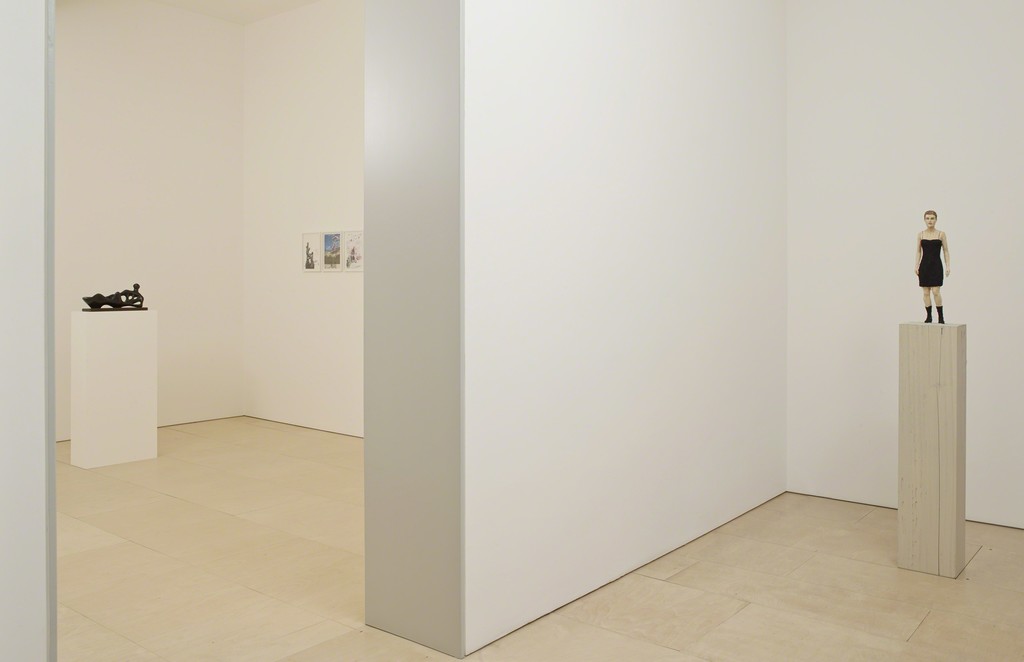 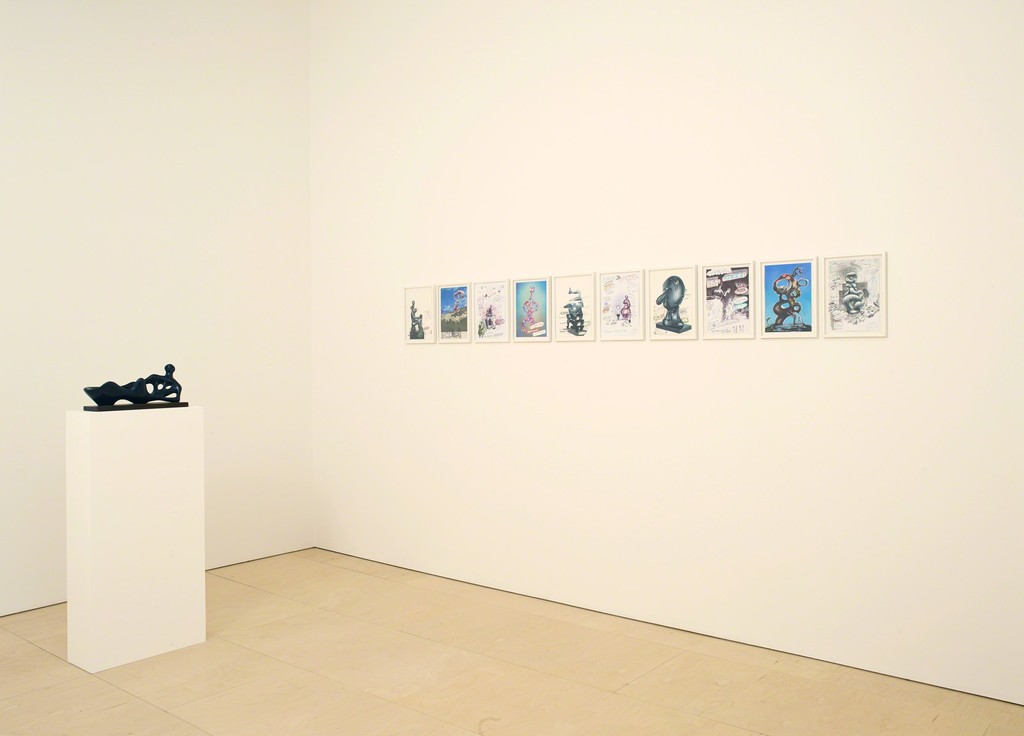 Stephen Friedman Gallery is pleased to present 'Study from the Human Body', a group exhibition that pivots around two legendary twentieth century artists: Francis Bacon and Henry Moore. The show captures the complex discourse on the human form by aligning the timeless influence of these two masters with a diverse group of international contemporary artists working today.

'Study from the Human Body' takes its title from a major painting by Francis Bacon which conveys a naked man in motion rendered in characteristic brush strokes of pink, purple and white. This powerful contemplation of the human form is evident in previously unseen paintings by Yoshitomo Nara, Kehinde Wiley and Jiro Takamatsu. Nara's ‘Julien' is an intimate full-scale portrait of a young boy, painted in gentle swathes of grey. In contrast, a dramatic new painting by Kehinde Wiley depicts a reclining semi-naked male figure mimicking the pose of a dying Thomas Chatterton in Henry Wallis' famous portrait of 1856. Catherine Opie's, ‘Divinity Fudge' hangs next to ‘Vaginal Davis' which both form part of the ‘Portrait' photographic series, formed from 1993 to 1997 while she was exploring the representation of the figure in gender politics and the sado-masochistic leather subculture in California.

Complementing the paintings is a group of figurative sculptures by Stephan Balkenhol, Huma Bhabha, Tom Friedman, Kendell Geers, Henry Moore and Yinka Shonibare, MBE. Bhabha's ‘Chain of Missing Links' is a towering human totem created with multifarious media including weeds, a skull, clay and Styrofoam. Its neo-primitive form draws a link to Geers' sculptures from the series ‘Flesh of the Spirit', a commentary on the fetishisation of African objects. Hand-modelled and cast in bronze they resonate with Henry Moore's delicate ‘Working Model for Reclining Figure' which elegantly recalls the British master's key principle of 'truth to materials'. This honest approach to art making is strongly evident in a new column sculpture by Stephan Balkenhol whose human form is hand-carved out of a solid block of wawa wood. Alongside the Henry Moore sculpture, a tightly curated selection of Paul McDevitt's ‘Notes to Self' integrate elements of his renowned biomorphic shapes.

Tom Friedman and Yinka Shonibare, MBE both present playful and anthropomorphic sculptures. A humorous self portrait, Friedman's 'Being' is a larger-than-life pre-historic man fashioned out of painted Styrofoam balls. Shonibare's 'Fire' is a Victorian figure of ambiguous race clothed in exuberant wax batik. In place of a head, an ornately carved glass lamp glows symbolically and flickers in reference to the element, fire.

In one gallery, David Shrigley's 2013 Turner Prize installation 'Life Model' is presented in London for the first time: a three metre high sculpture of a naked and comically disproportioned male model is set within a traditional life drawing classroom. Standing still on a plinth, his beady eyes occasionally blink and periodically he urinates into a tin bucket near his feet. Here, the concept of a traditional life drawing class is reimagined as the public is invited to participate in an ongoing 'study' of the human body over the course of the show.

A meeting of tradition and innovation, connoisseurship and humour, 'Study from the Human Body' is a comprehensive exploration of the impact of Francis Bacon and Henry Moore on contemporary figurative art.

With thanks to Slade School of Fine Art, UCL.

David Shrigley (b.1968) lives and works in Glasgow, Scotland. David Shrigley is the winner of the Fourth Plinth Commission in London for 2016 and he was a Turner Prize nominee in 2013. Notable solo exhibitions include; ‘David Shrigley', Pinakothek, Munich, Germany (2014); ‘Turner Prize', Derry-Londonderry', UK (2013); ‘How Are You Feeling?', Cornerhouse, Manchester, UK (2012-2013); ‘Arms Fayre', Stephen Friedman Gallery, London (2012); and ‘Brain Activity', Hayward Gallery, London; touring to Yerba Buena Centre for the Arts, San Francisco, USA (2012). Upcoming exhibitions include; David Shrigley at Sketch, London (2014) and at the National Gallery of Victoria, Melbourne, Australia (2014-2015).

Kehinde Wiley (b. 1977) lives and works in New York and Beijing, China. He will be the subject of a major solo exhibition at the Brooklyn Museum of Art, New York in 2015. Wiley has been subject of five touring ‘World Stage' solo exhibitions, most recently at Stephen Friedman Gallery, London (2013). A notable group exhibition includes ‘Masculine / Masculine. The Nude Man in Art from 1800 to the Present Day', Musèe d'Orsay, Paris (2013).