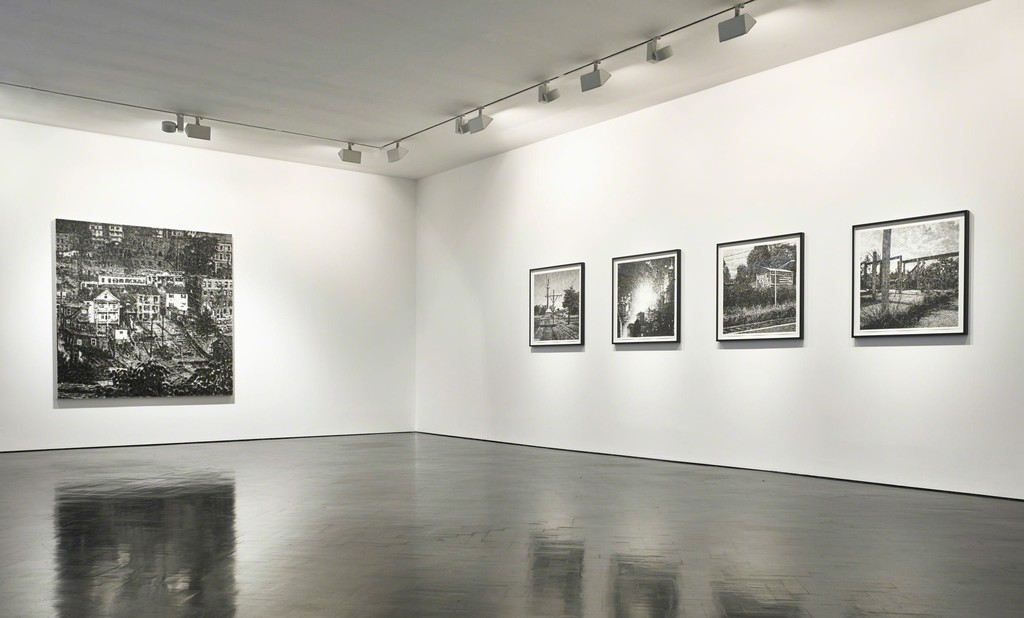 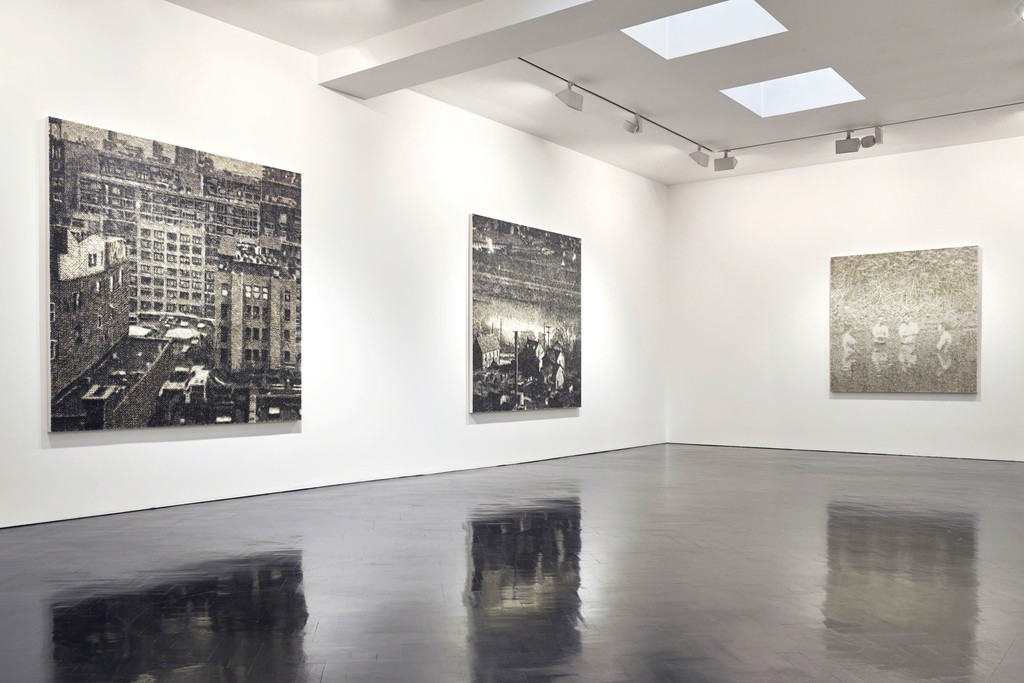 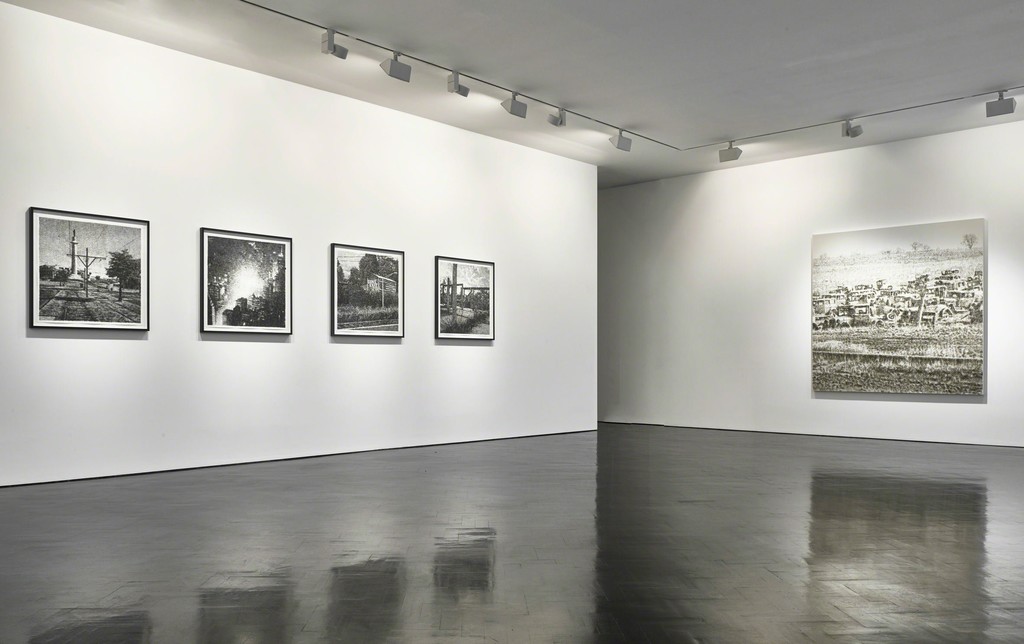 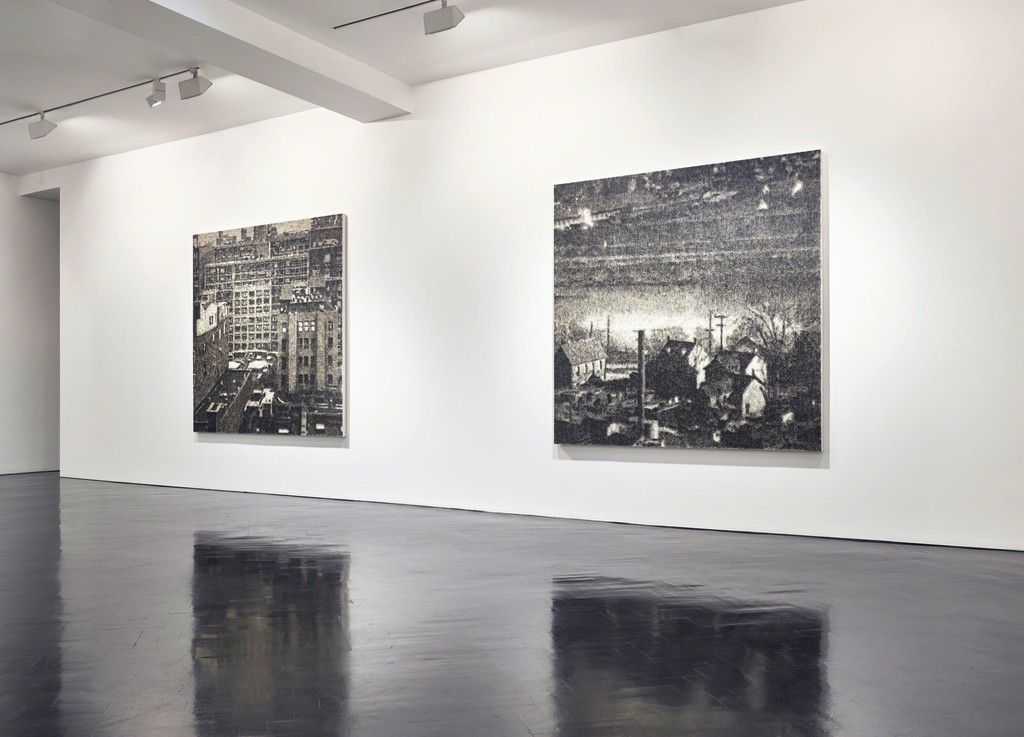 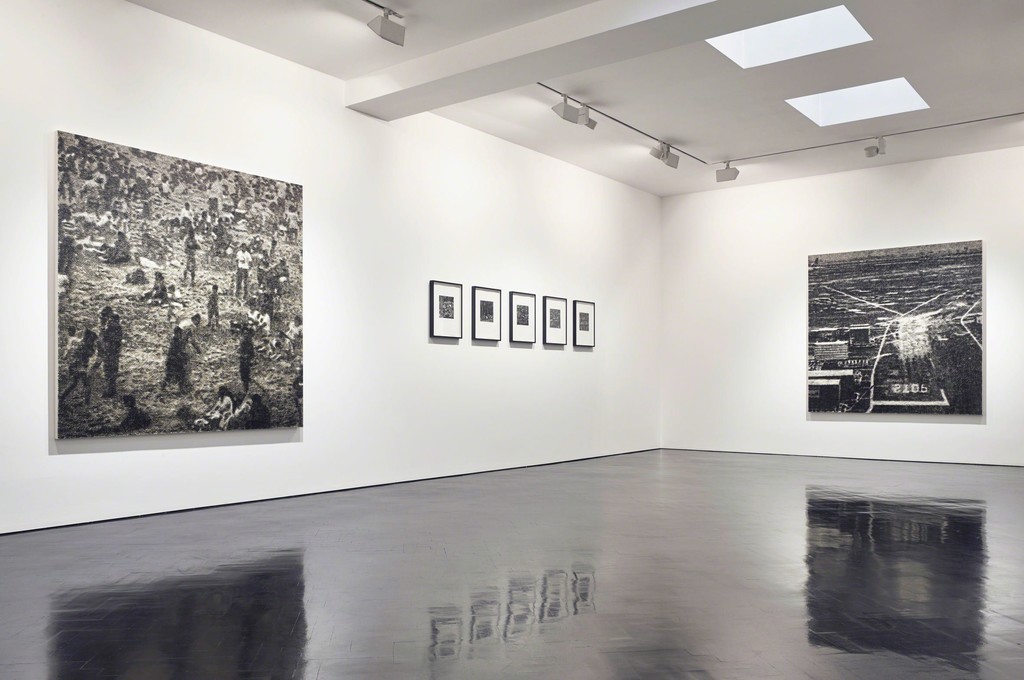 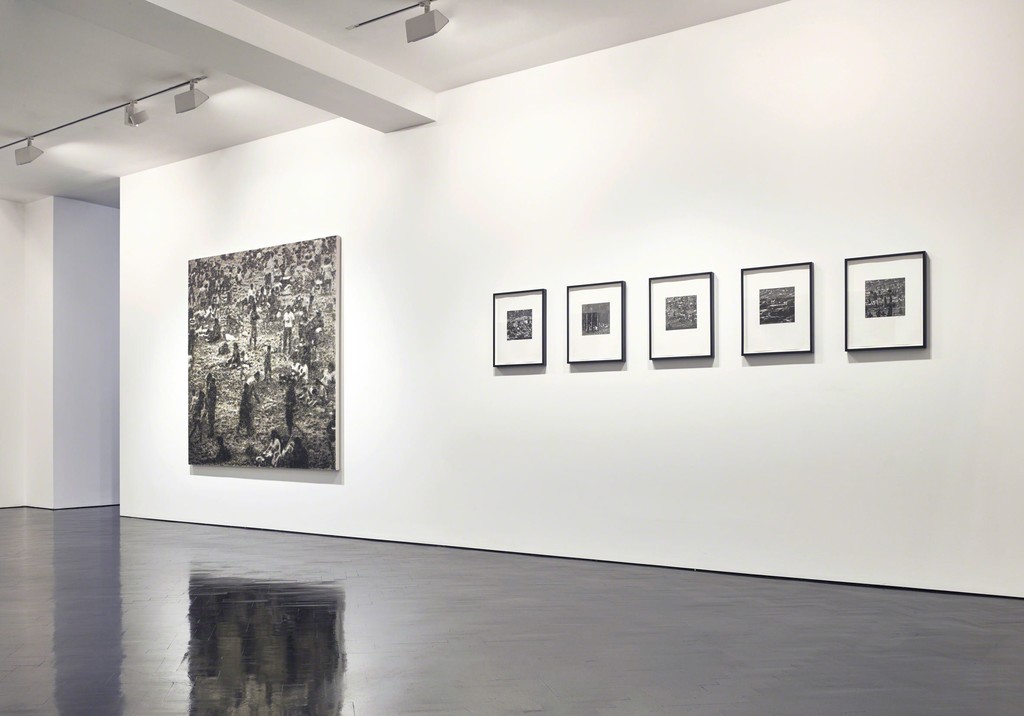 Stephen Friedman Gallery is pleased to present a new body of work by American painter Wayne Gonzales. The artist’s fourth show at the gallery comprises paintings, etchings and works on paper and heralds a new direction in the artist’s painterly style. Taking Walker Evans as a starting point and using a highly expressive method of crosshatching, Gonzales distils a range of distinctly American source imagery in his exploration of the relationships between photography, history and memory. Founded on the traditional values of painting such as space, light and volume, each painting blows an image apart before its intense, multi-layered reconstruction.

This body of work was born from a series of etchings commissioned in 2012 which are included in the exhibition. The methodology of working line-by-line through etching became the artist’s inspiration first realised in a body of drawings, and then subsequently enlarged in acrylic on canvas. The detailed concentration of crosshatching creates a very different result in each medium. Yet we can, quite literally, trace the line from each etched, drawn and painted variation and through doing so recall the experimental etchings of Masters such as Rembrandt through to contemporary practitioners of line such as Sol LeWitt.

Each painting is a considered construction by the artist from its original source material: extracted, cropped, broken down and reassembled on the canvas in a deliberately reduced palette. This ranges from purely black and white through to green and brown, with each canvas only using two or three colours. The intensity of colour shifts through the various layers of hatching. Through a technique centred on the effects of chiaroscuro, Gonzales gives form to people, buildings and landscapes through differing densities of interlocking lines. Dependent on our proximity to the work, Gonzales’ scenes come in and out of focus rather like a view through the lens of an analogue camera. From afar we are granted a strong sense of the scene as a whole, when up close; the figures and landscapes dissolve into hazy worlds of impressionistic brushstrokes and small gestures. The crosshatching also introduces a more responsive and instantaneous element of risk with every mark on the canvas. Gonzales’ work becomes part documentary, part speculation and part imagination.

A common thread running through each work is the dissection of specifically American imagery. While in the past Gonzales has often used anonymous source imagery, here three of the paintings and two of the drawings are appropriations from photographs by Walker Evans, each capturing a historical moment. These images, of a car dump and of city panoramas, recall a typically American landscape of the early twentieth century. These works are juxtaposed with those taken from recent photographs including the runways at JFK airport, bathers in New Hampshire, a beach scene in Santa Monica and a view of New York City from the artist’s studio. There is a conceptual relationship between the images, all chosen for their inherent American-ness but transcending place and time.

In each work, we encounter a close-cropped snapshot of the American landscape and indeed the American psyche. This documentary attitude draws a parallel with that of Éduoard Manet, painter of modern life in nineteenth century Paris and documenter of the city’s physical and cultural change. Gonzales’ painting of the car dump could stand as a metaphor for new beginnings, the start of new construction. Its counterpart is the painting of the view from the artist’s studio in New York where the buildings take on the feeling of a surging crowd of people. There is a claustrophobic feel to the image, heightened by the frenzy of brushstrokes. The Walker Evan’s paintings in contrast appear to have sparer lines, almost as if to convey the sense of a less frenetic, slower time that causes us to pause for a moment.

Through the dissemination of these images, Gonzales takes the role of observer of contemporary culture, combining banality with something more sinister while remaining determinedly ambiguous. ‘Santa Monica Beach, California’ and ‘Bathers, Rumney, New Hampshire’ call to mind the romantic Pointillist riverside scenes of Seurat and Cézanne’s Impressionist bathers respectively. On the other hand, the paintings hold an eerie feeling of surveillance, long-range photography and advanced computer software, which can deconstruct and reconstruct places and faces on a whim. This combining of visual accessibility and inaccessibility within a single work acts as both an invitation for free association to possible narratives as well as to a metaphor for the easy manipulation of historical ‘fact’. The Bathers not only have a historical lineage in painting but also point to Thomas Eakins’s photographs in nineteenth century America. Through this work in particular, Gonzales pushes a contemporary photograph back to a time preceding even its historical photographic predecessor.

This exhibition serves to remind us of painting’s ability to transcend time and place while remaining inherently and insistently contemporary. Gonzales’ ongoing investigation into the power of images has here taken an exciting new development in line with growing changes in technology and our ever-changing perception of the world around us.

Wayne Gonzales was born in 1957 in New Orleans, Louisiana, USA. He lives and works in New York, USA.