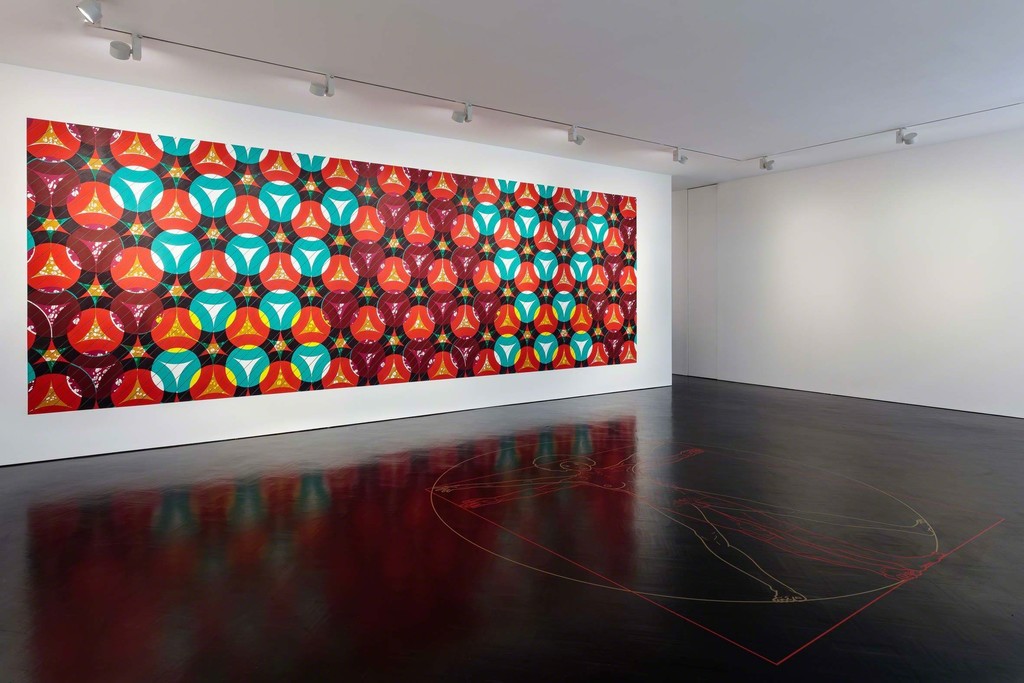 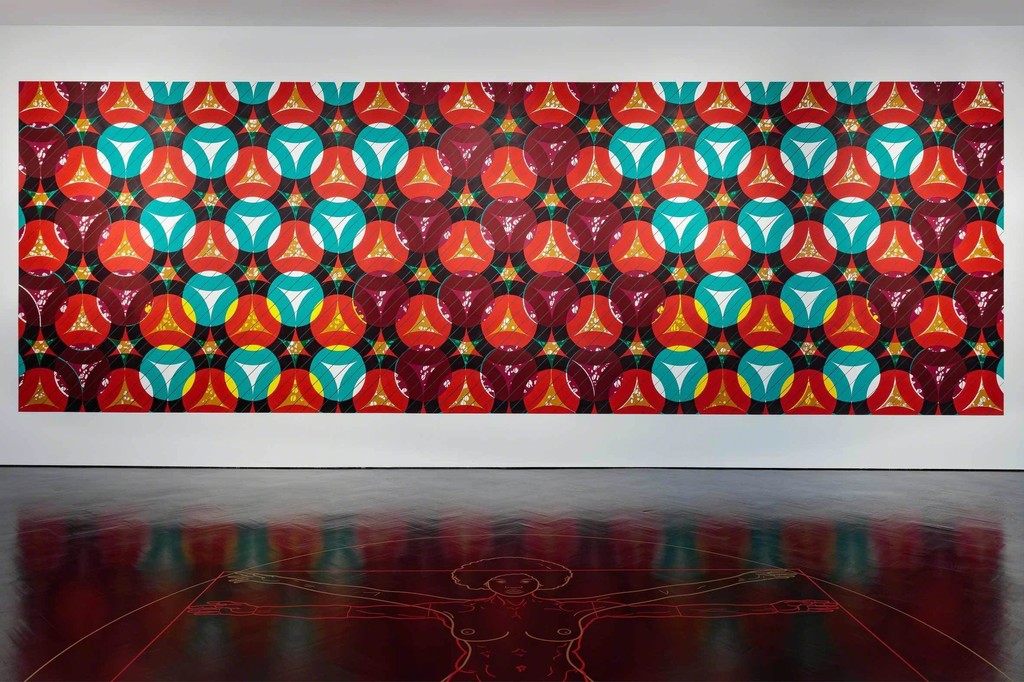 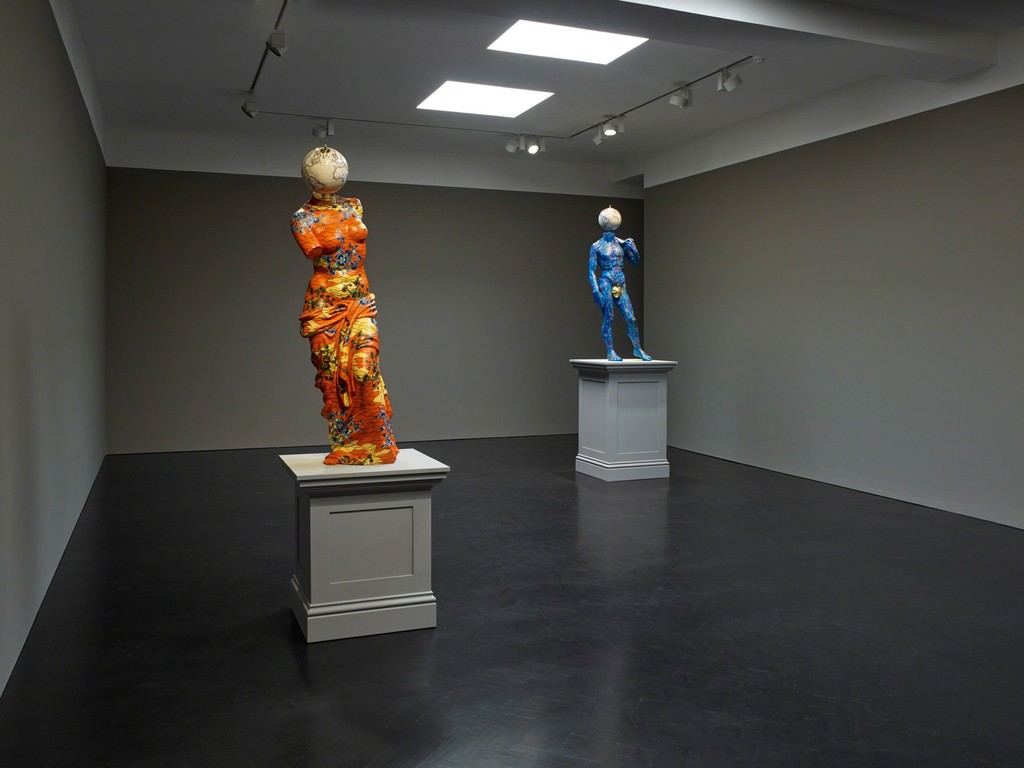 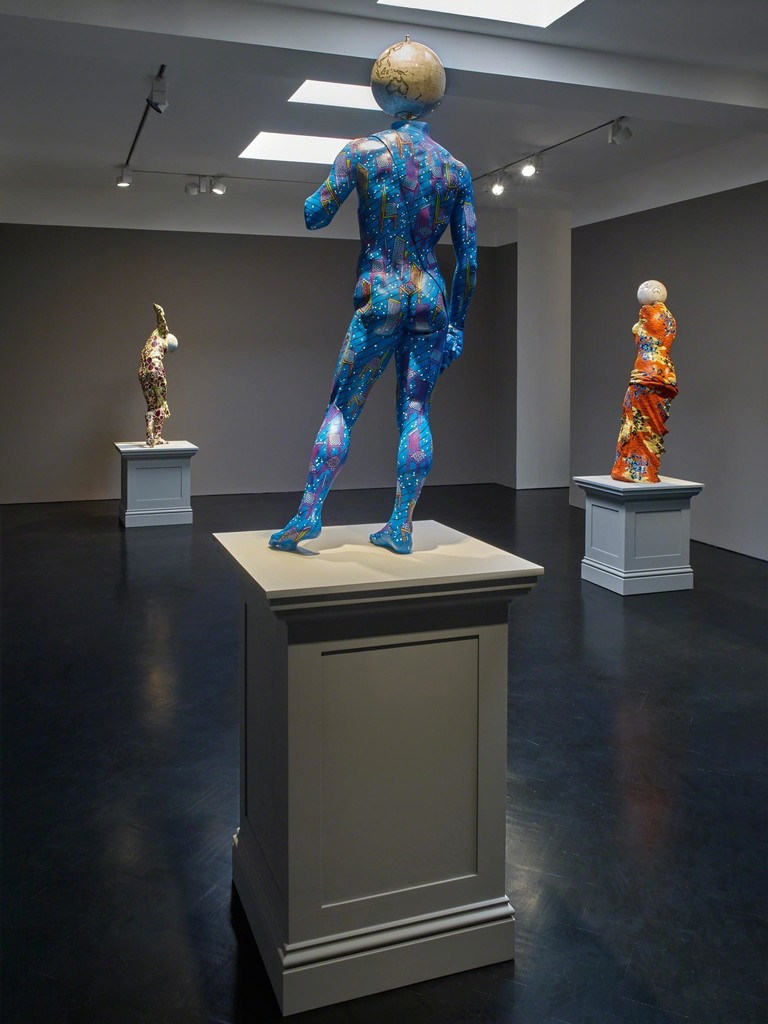 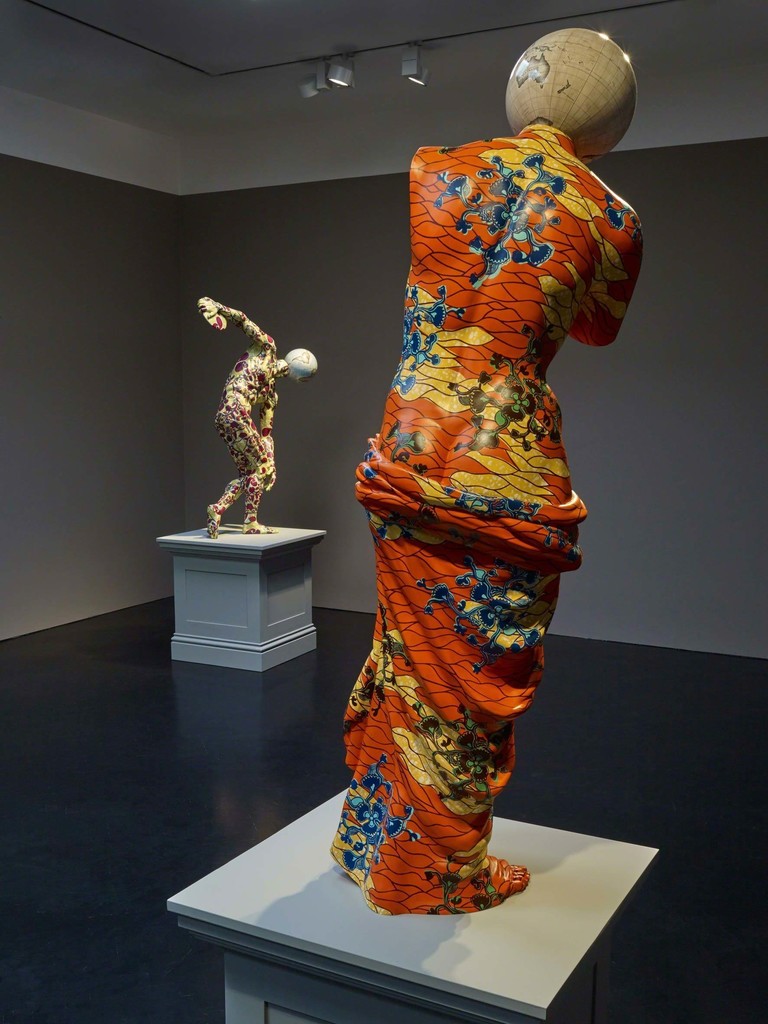 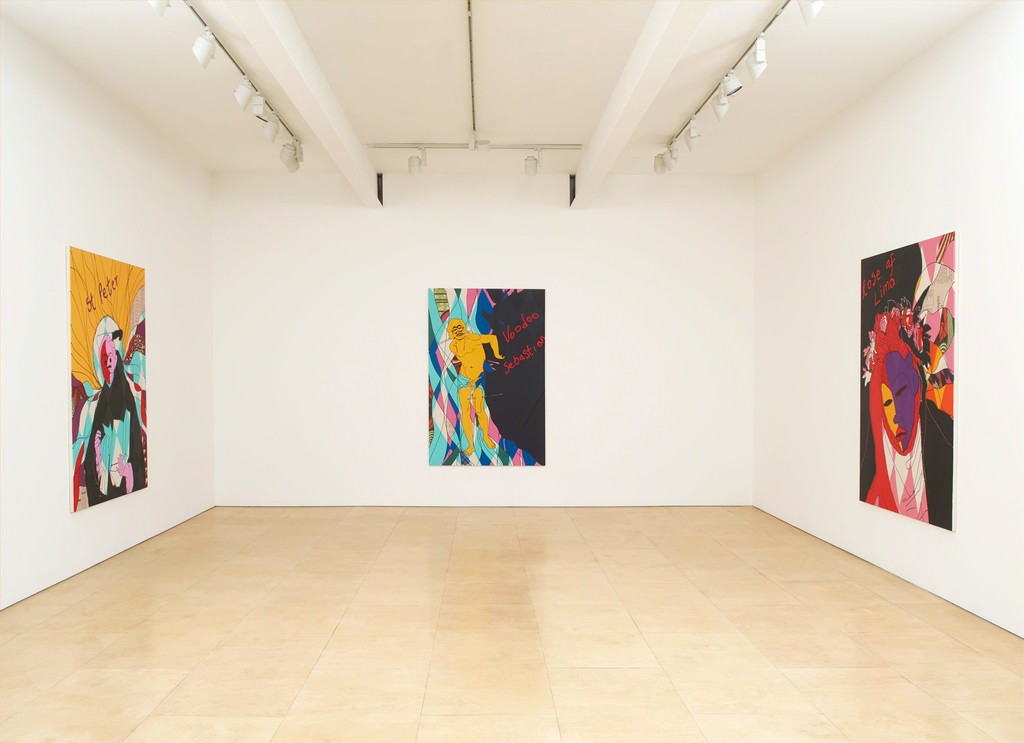 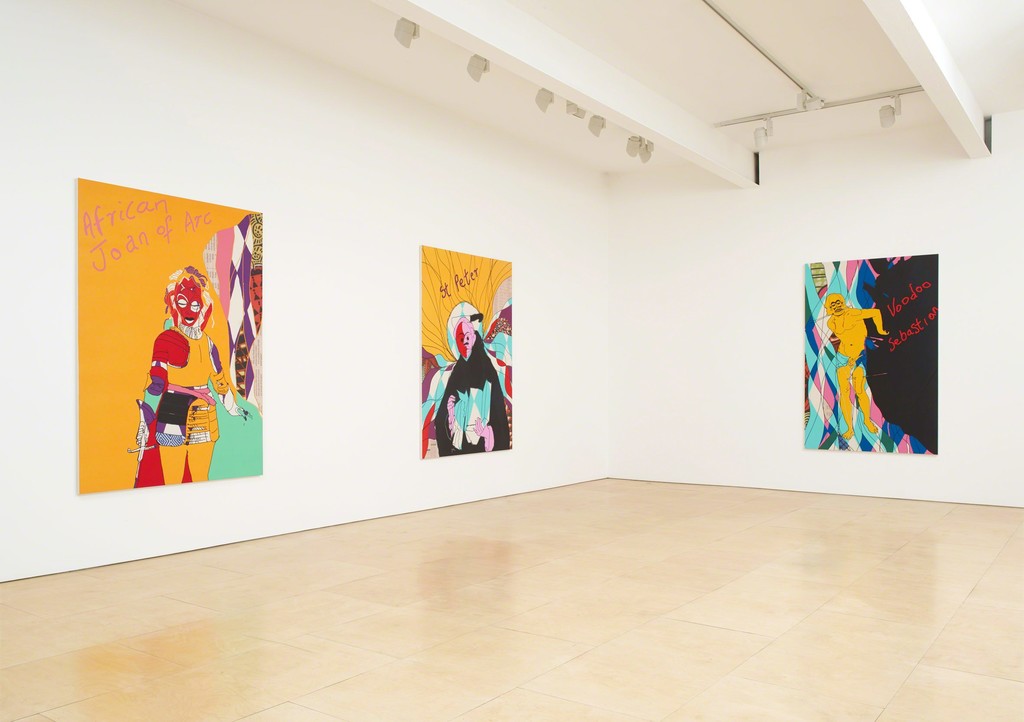 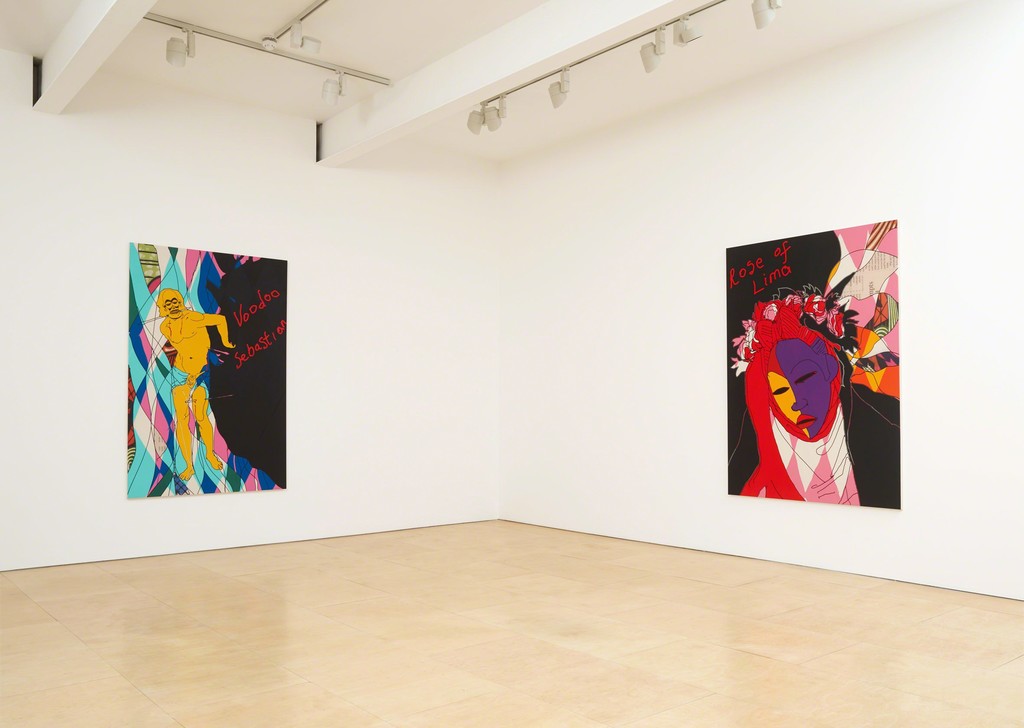 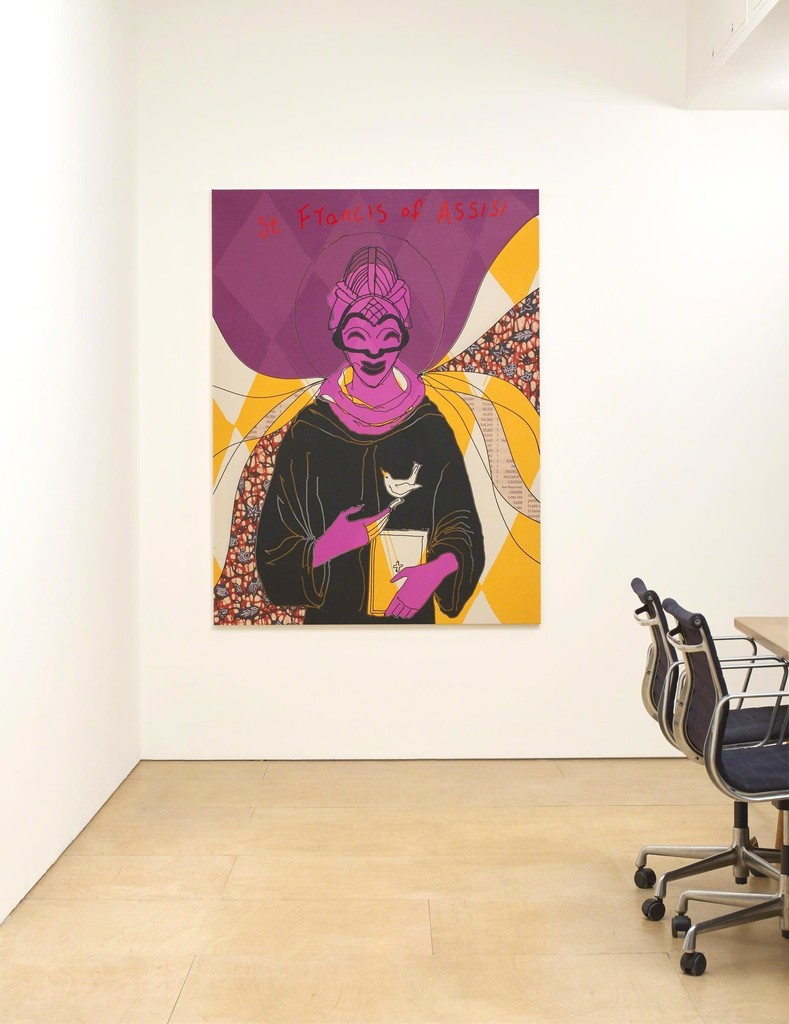 The show marks a pivotal moment in the artist’s practice with the complete absence of the Dutch wax batik textiles for which he is known. Shonibare removes the fabric altogether and uses the batik designs in new forms; mural painting, bronze sculpture, screen prints on canvas and the appropriation of classical sculpture.

Shonibare uses the patterns as a device to interrupt the canon of classical and renaissance art and Western religious iconography. He indicates his intention to challenge and dismantle the boundaries of Western understanding in the title of the show. By leaving the ‘trace’ of his trademark batik motifs, Shonibare gives a personal insight into the complexities of identity, nationality and colonial history.

The exhibition is divided into two parts: Gallery One is focused on ideas of rationality in classical art and Gallery Two, on religious hybridity.

On entering Gallery One, we are struck by the absence of sculpture. Instead, an expansive wall painting is framed by the white walls of the gallery. Unlike previous iterations of these impressive installations, here there are no sculptural elements. This work sets the tone for the show as the wax batik pattern is stripped from the fabric and painted directly onto the wall.

The intersecting circular pattern deliberately echoes the same motif used in Shonibare’s commission ‘The Family Album’ which is currently displayed on the Royal Academy’s façade on Burlington Gardens.

Inspired by Leonardo da Vinci's ‘Vitruvian Man’, the wall painting in the front space of the gallery is completed by an accompanying floor drawing rendered in gold and red. These two elements form one immersive work. Da Vinci’s drawing was intended to demonstrate the humanist perspective that man is the measure of all things. Shonibare’s proposal of a new measure is a black figure, and a hybrid of both man and woman.

In the following gallery three sculptures recognisable as Venus de Milo, Discobolus of Myron (Discus Thrower) and Michelangelo’s David are hand painted with batik patterns. Much like the artist’s series of ‘Self Portraits (after Warhol)’ in which he superimposed batik patterns onto his own face, the sculptures are transformed with the patterns ‘tattooed’ directly onto the sculptures. Using sculptural archetypes of sexuality, masculinity and athleticism, Shonibare manipulates the aesthetics of these forms to challenge the accepted definition of the idealised body.

Dutch wax batik fabric was inspired by Indonesian design, mass-produced by the Dutch and British and eventually sold to the colonies in West Africa. In the 1960s the material became a new symbol of African identity and independence. Since the early 1990s, Shonibare has used it to represent the flexibility of identity as much as the implications of trade and colonialism.

The series of imposing hand pulled screen-prints on canvas in Gallery Two is Shonibare’s largest and most ambitious to date. A key feature of Shonibare’s work is its visual appeal, and these are immediately seductive in colour and beauty. Figures from Christian and African religious iconography merge into fantastical hybrids. Shonibare is able to make these works by using new technology and drawing on a large tablet. This is the first instance in which we see Shonibare’s unmistakable style of drawing on such a scale. Each canvas began with an image of a European religious figure. Shonibare dressed the faces of the saints in African masks used in religious rituals. Stock market listings from the Financial Times are then juxtaposed with Dutch Wax Batik patterns and vivid clashing colours.

“First of all [I] think about picture making itself: the history of Modernism and the aesthetic of the mask in Modernist painting. So we are going back to Picasso. And then taking that signifier of religious ritual, which is the mask, and overlapping one religious symbol with another religious symbol”. By combining powerful imagery with their respective mythologies, Shonibare creates a hybrid ideology: what he calls ‘a third myth’.

Shonibare’s presentation of new work seduces and undermines the expectations of the audience. Removing the textiles for which he is known and using the mimesis of the fabric is an important move for the artist. Shonibare sees the material as a metaphor for interdependence: complexity and ambiguity are the cornerstones of his artistic narrative. His specific concerns here; art history, the power of iconography and religion, are powerfully brought together. With each of them he interrupts familiar references by overlaying the image with the wax batik pattern. In doing so he exercises individual agency and aesthetic creativity, which are ideas that are central to humanism. This has long been present in Shonibare’s work. This exhibition should be read as a celebration of human expression, achievement, beauty and the pursuit of intellectual and religious liberty, regardless of race and time. ‘...and the wall fell away’ demonstrates an irreverent disregard for the binaries presented in Western understandings and offers a contemporary deconstruction of the classics.