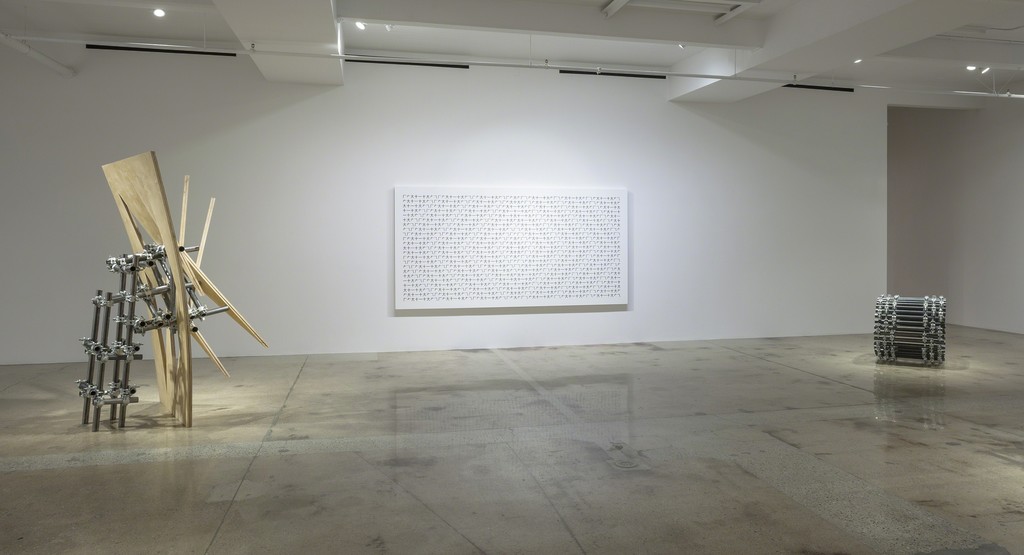 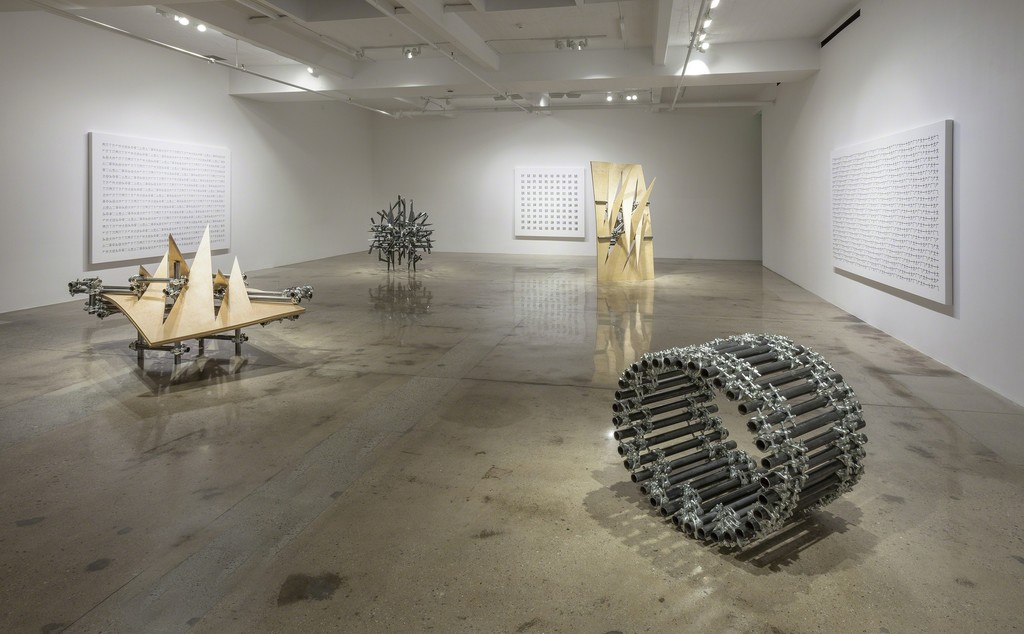 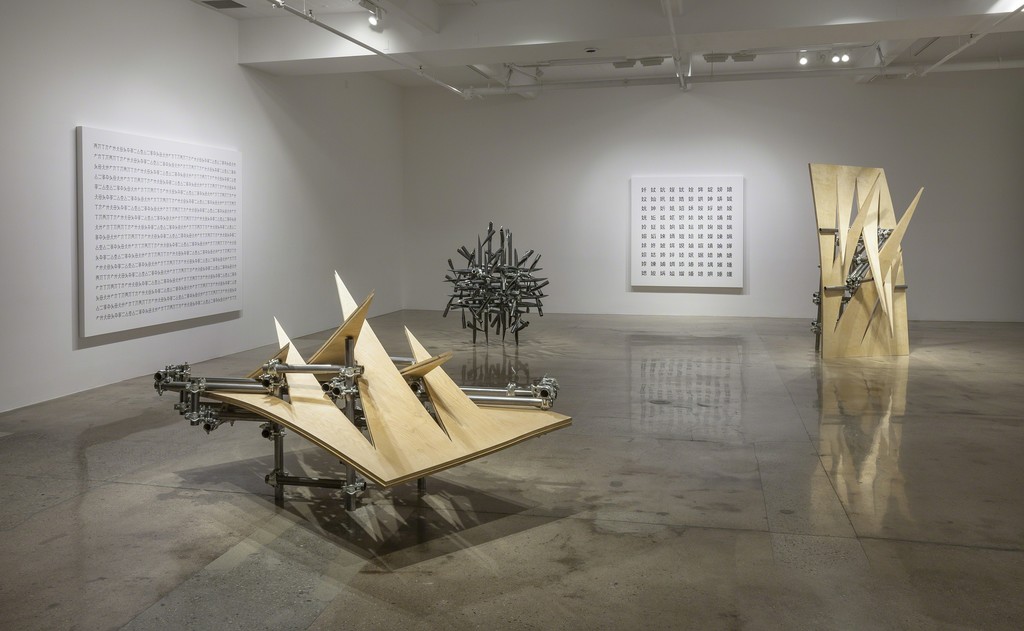 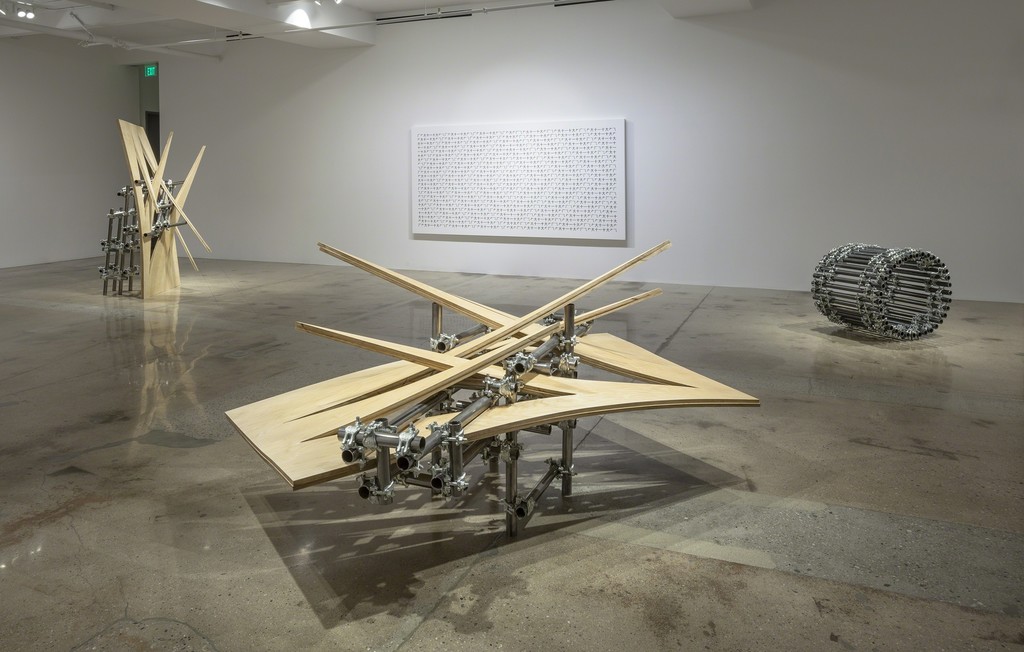 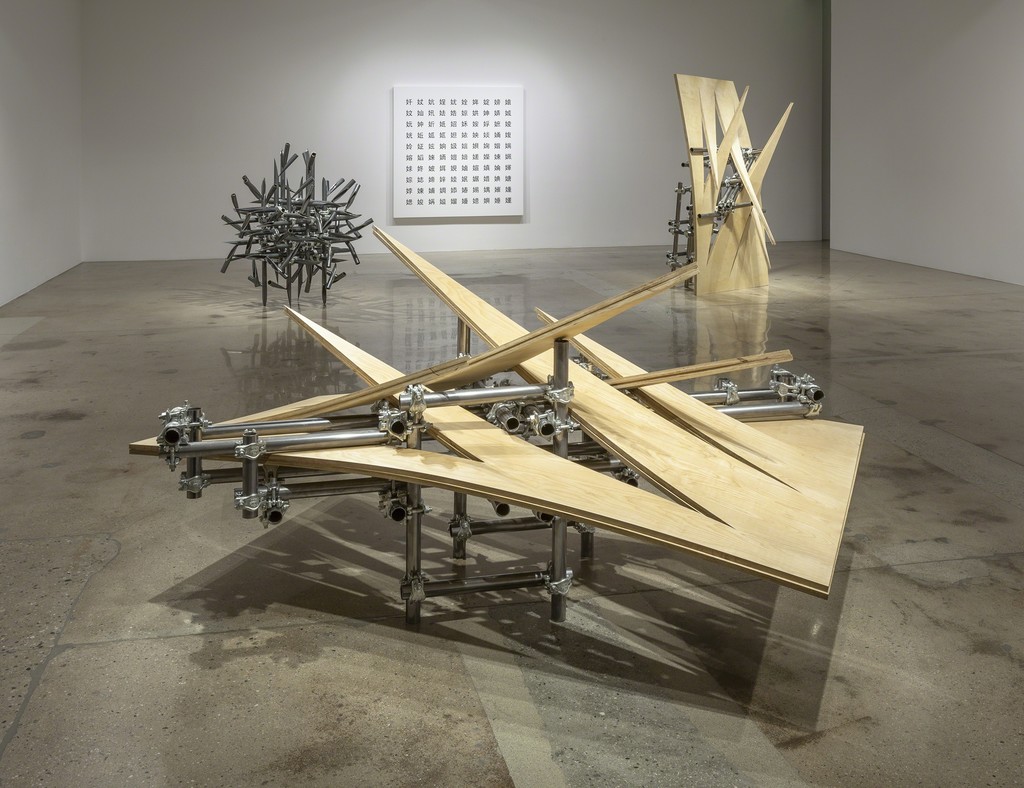 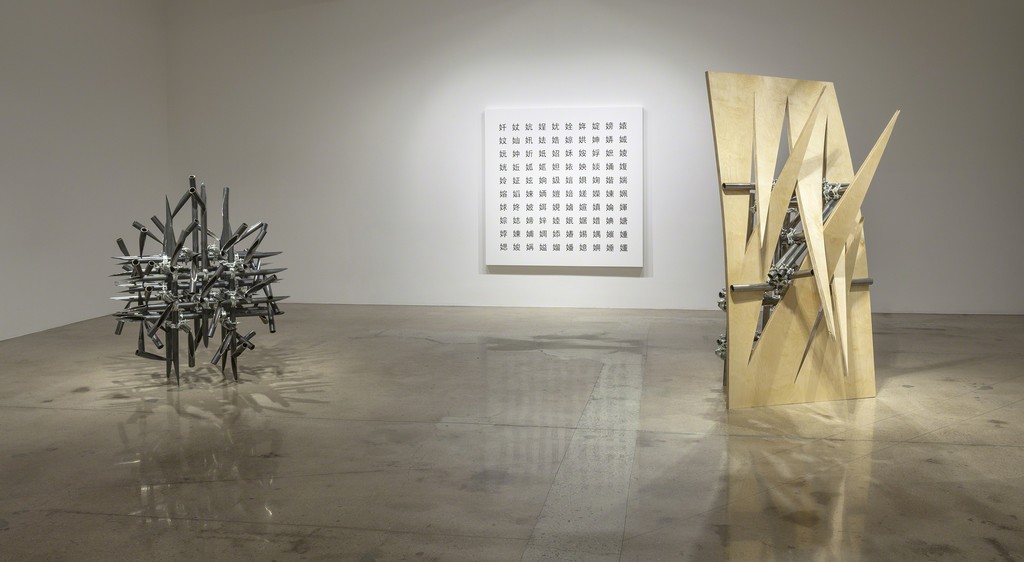 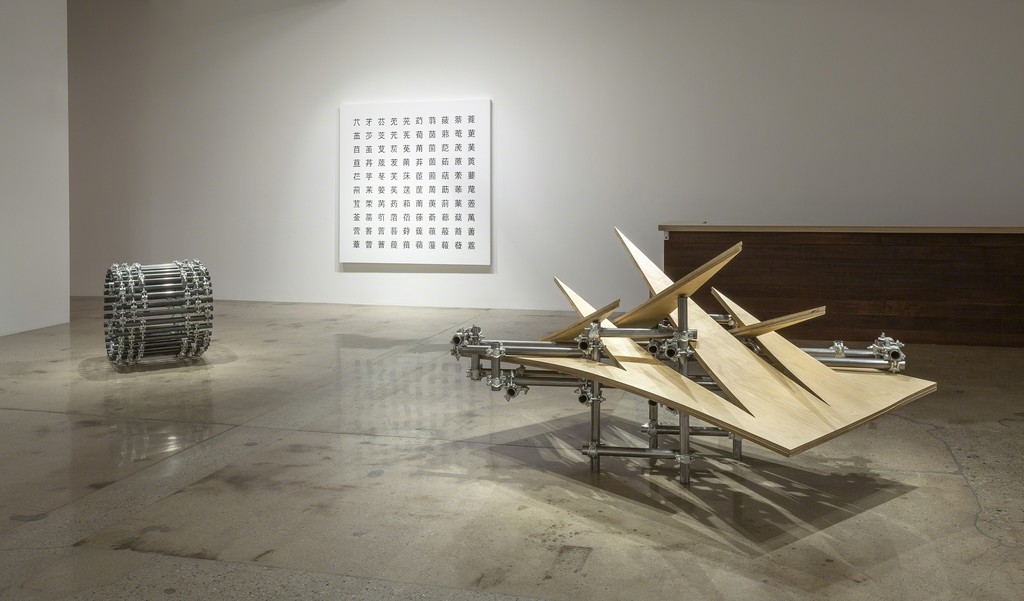 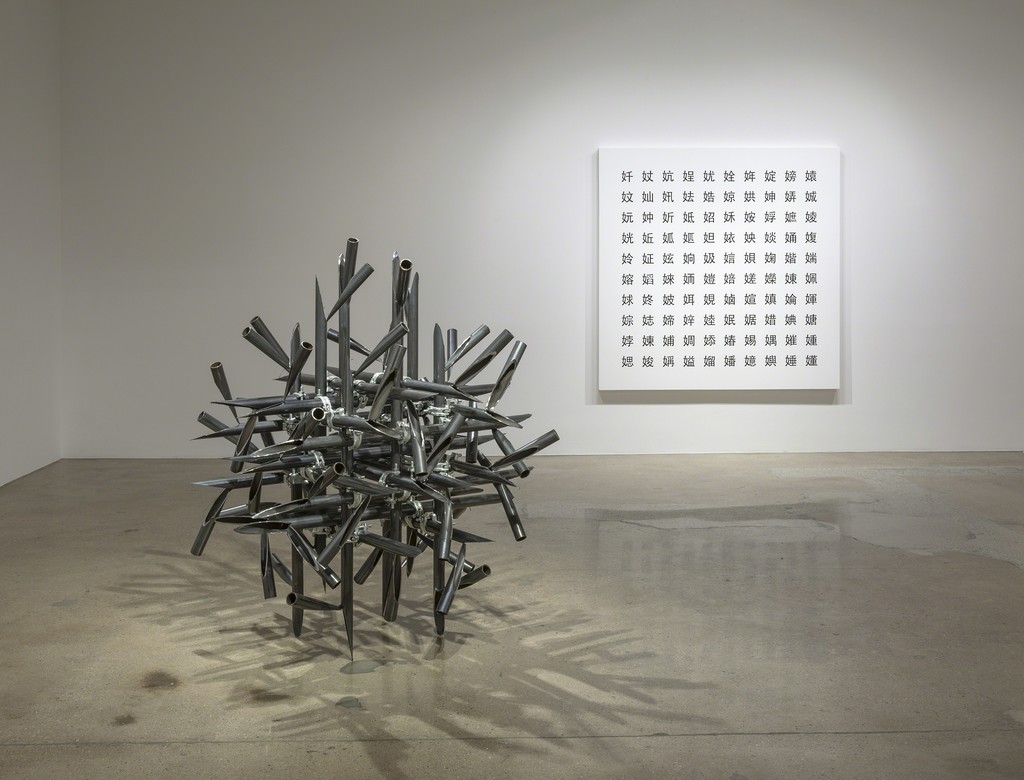 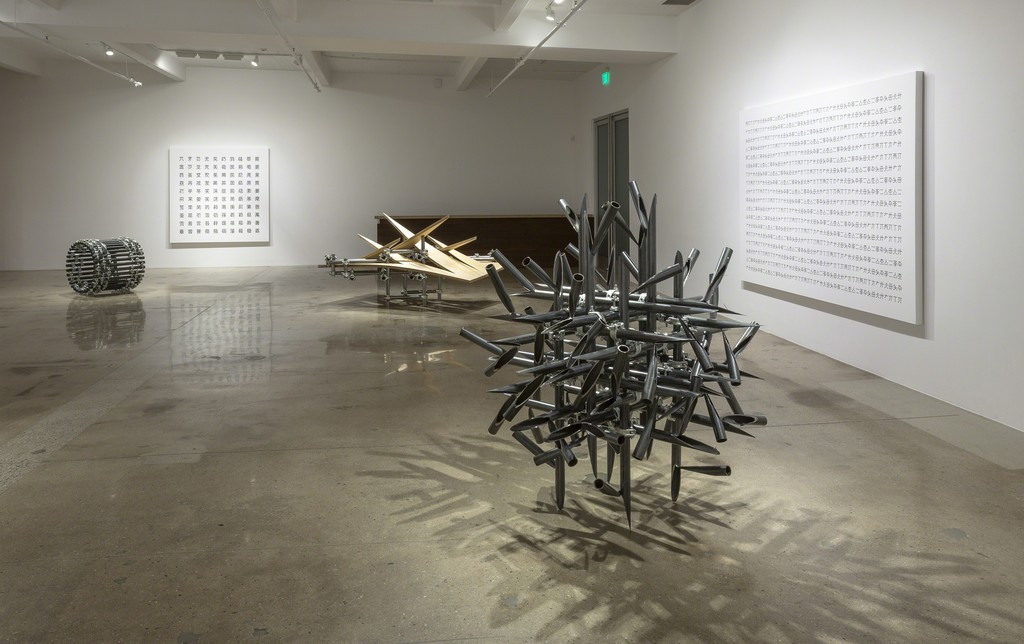 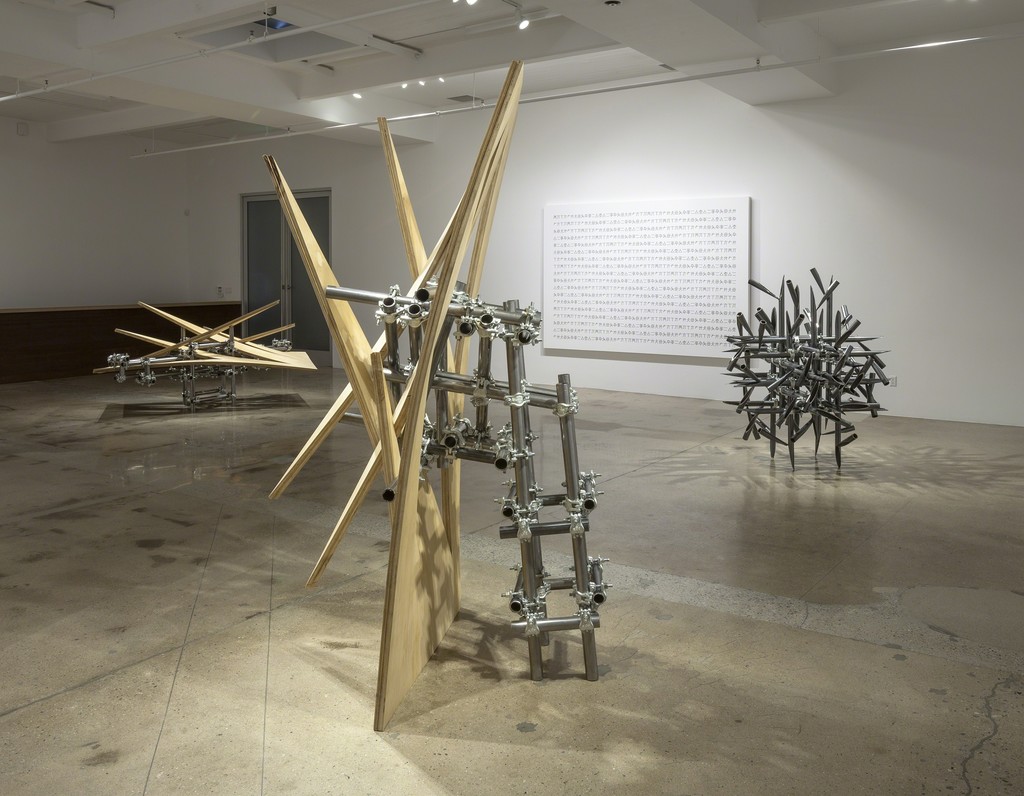 Steve Turner is pleased to present Free Function, a two-person exhibition featuring new paintings by Berlin-based Jia (嘉) and new sculpture by Buenos Aires-based Luciana Lamothe. Both artists work with strong associations to architecture: Jia, by virtue of her formal training as an architect and her use of structure; and Lamothe, in her materials and methods of assembly. Both defy the conventional functions of their imagery and components—in Jia’s case, written language’s semantic purpose; in Lamothe’s, the pipes and planks of architectural scaffolding—in order to reconfigure these elements for unexpected results.
Jia’s paintings are part of her ongoing series, The Chinese Version, which reimposes a formal aspect to “replace” that which was mutilated by the state’s ban on traditional characters, as part of its character simplification program enforced for ideological ends since the fifties. Jia’s strategy is to arrange Chinese characters for formal rather than semantic reasons. Each character therefore may retain its individual meaning, but not its function in a coherent sentence. Although they seem to be printed, the characters are hand-painted, thereby generating a further tension between their overt appearance and their actual nature.
Lamothe’s work renders construction and scaffolding materials as ductile, elastic, and dynamic in a way that contravenes expectations about their apparent rigidity. She stresses the materials to just within their breaking point, creating doubts about strength and security. Reconfiguring conventional systems of language and architecture, the artists reveal that by undercutting the intended functions of structures, new constructive meanings become possible.
Jia (born 1979, Beijing) received an M.A. in traditional Chinese drama at the Chinese National Academy of Art, Beijing and studied architecture at the North China University of Technology, Beijing. She had a solo exhibition at Arratia Beer, Berlin (2015) and her work has been included in group exhibitions at Rohkunstbau XXII, Roskow, Brandenburg (2016); Global: Infosphere, ZKM Museum of Contemporary Art, Karlsruhe (2016); Schnittmengen, Museum of Asian Art, Berlin (2016); Secret Signs, Deichtorhallen, Hamburg (2014); Berlin Biennial (2012) and the Shanghai Biennial (2002). This is her first exhibition at Steve Turner, Los Angeles.
Luciana Lamothe (born 1975 Mercedes, Argentina) studied at the National School of Fine Arts, Buenos Aires (1999); participated in the Kuitca Scholarship, Universidad Torcuato Di Tella, Buenos Aires (2011) and has had residencies at Air Antwerp (2013) and Skowhegan (2007). She has had solo exhibitions at MAMBA, Buenos Aires (2013); Ruth Benzacar Gallery, Buenos Aires (2014, 2011, 2008, 2006) and Arroniz Gallery, Mexico City (2012). Her works have been included in group exhibitions at Museo MAR, Buenos Aires (2015); La Maison Rouge, Paris (2015); Palais de Tokyo, Paris (2013); De Appel Art Center, Amsterdam (2011); the 11th Lyon Biennial (2011) and the 5th Berlin Biennial (2005). This is her first exhibition at Steve Turner, Los Angeles.