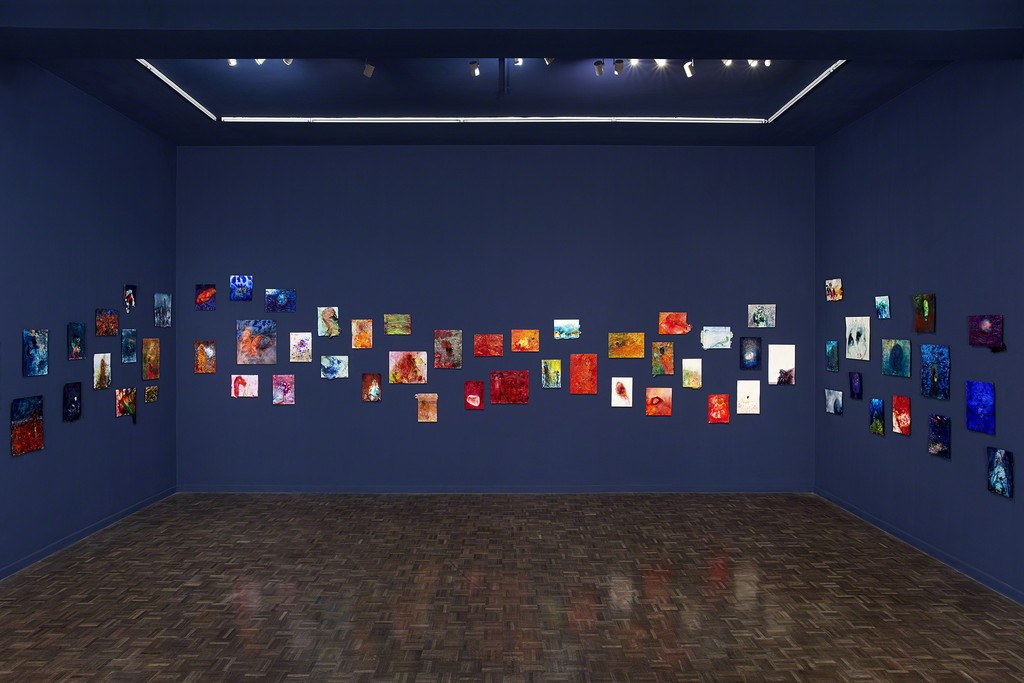 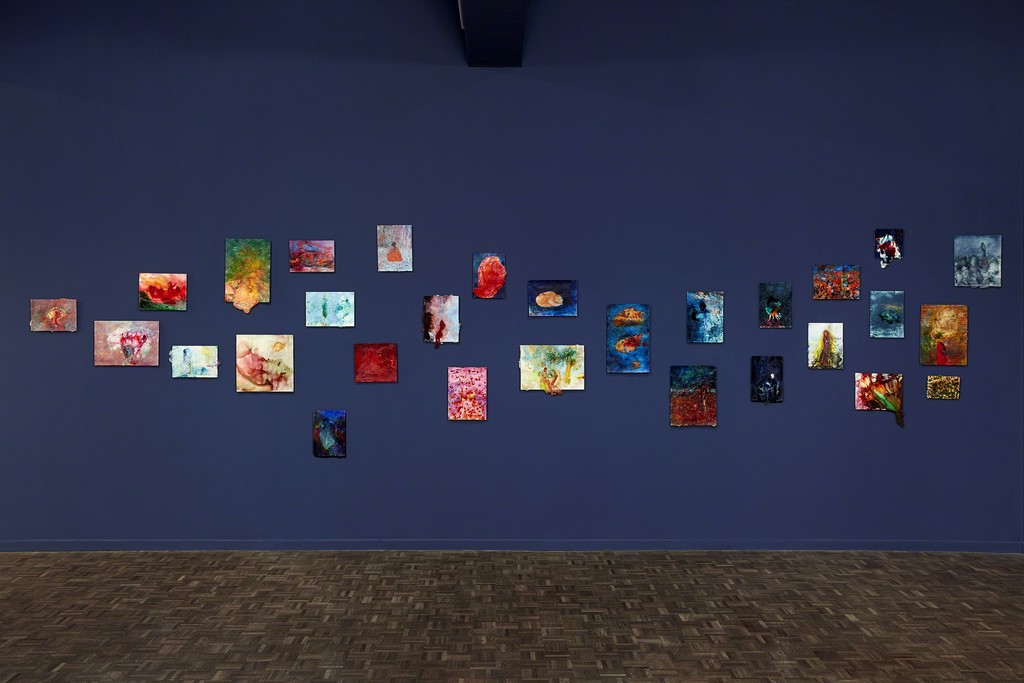 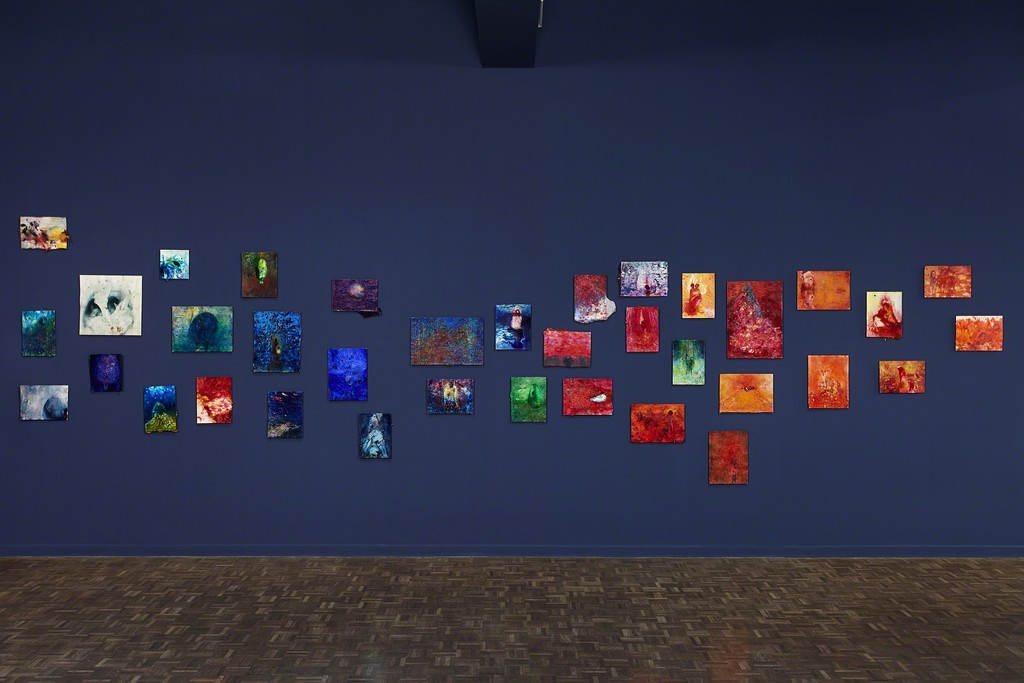 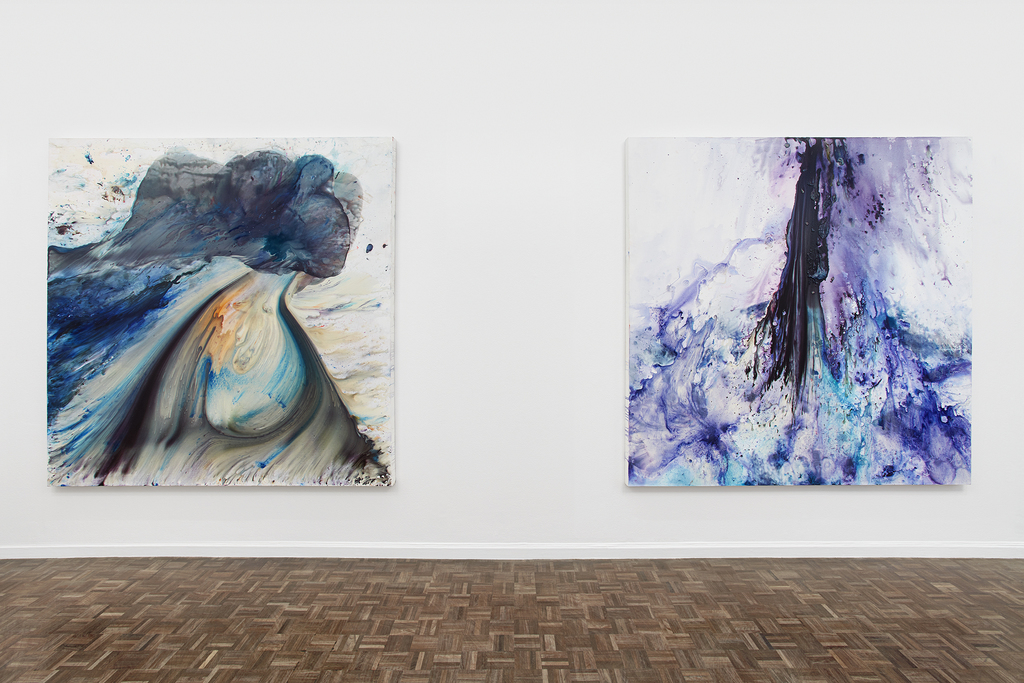 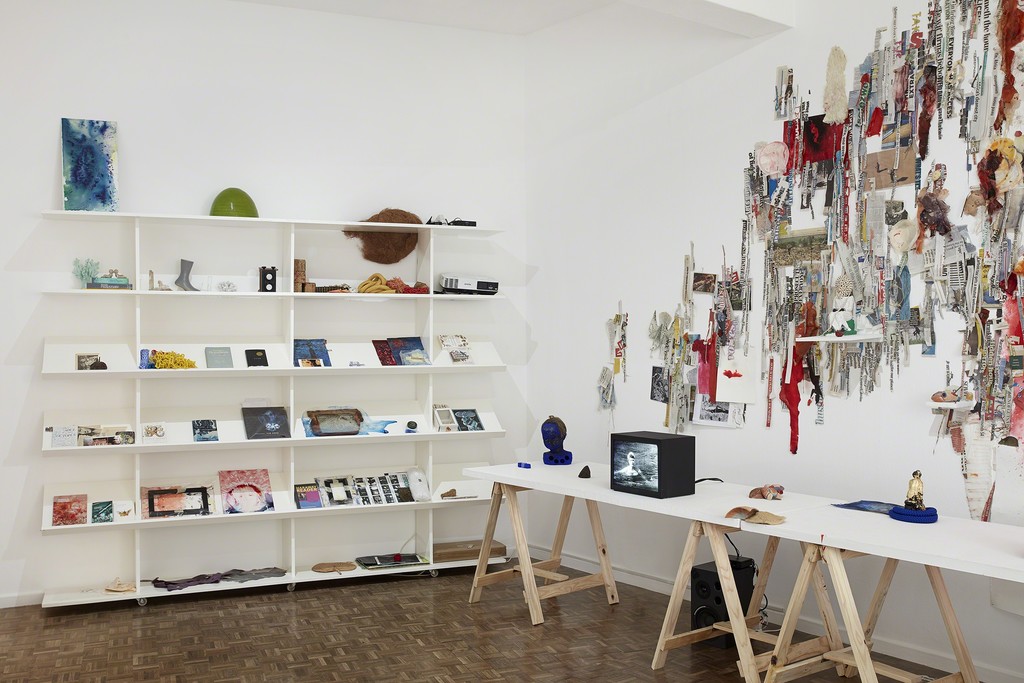 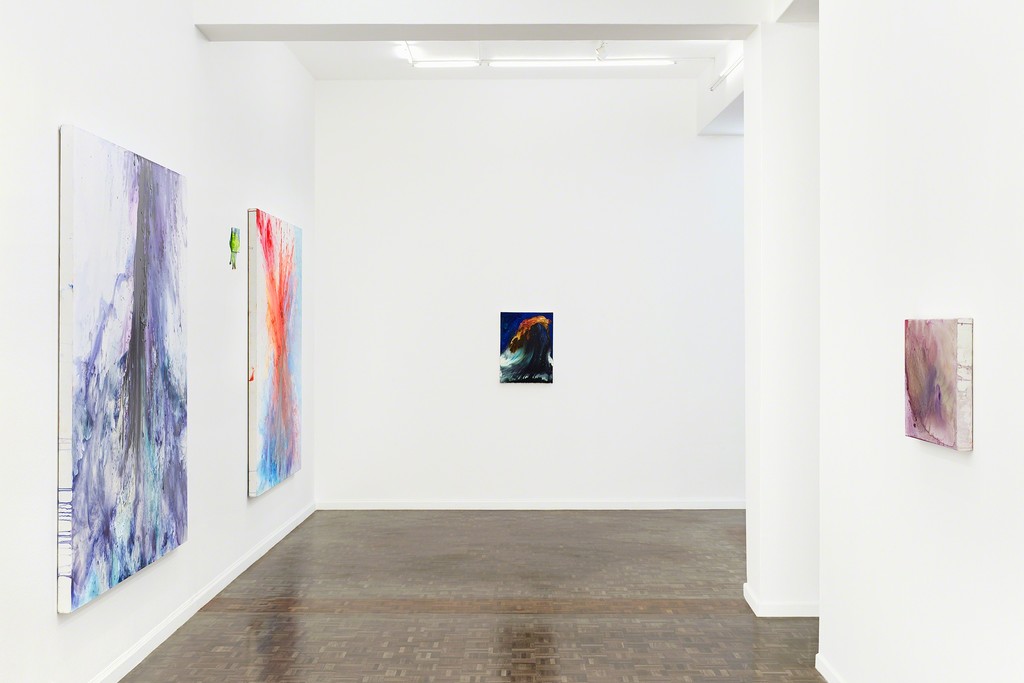 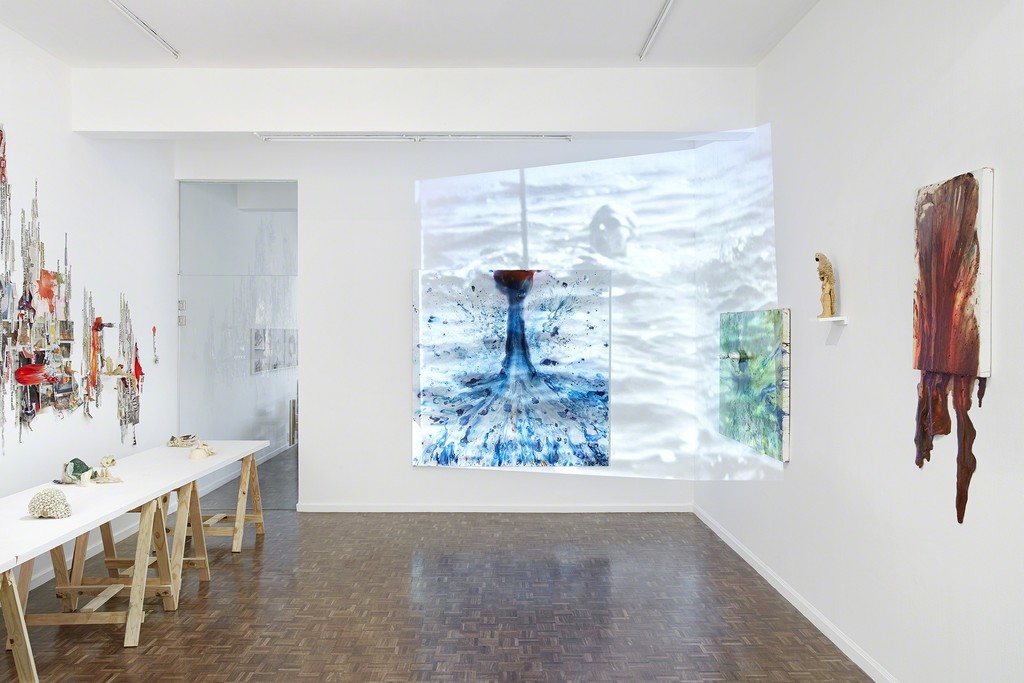 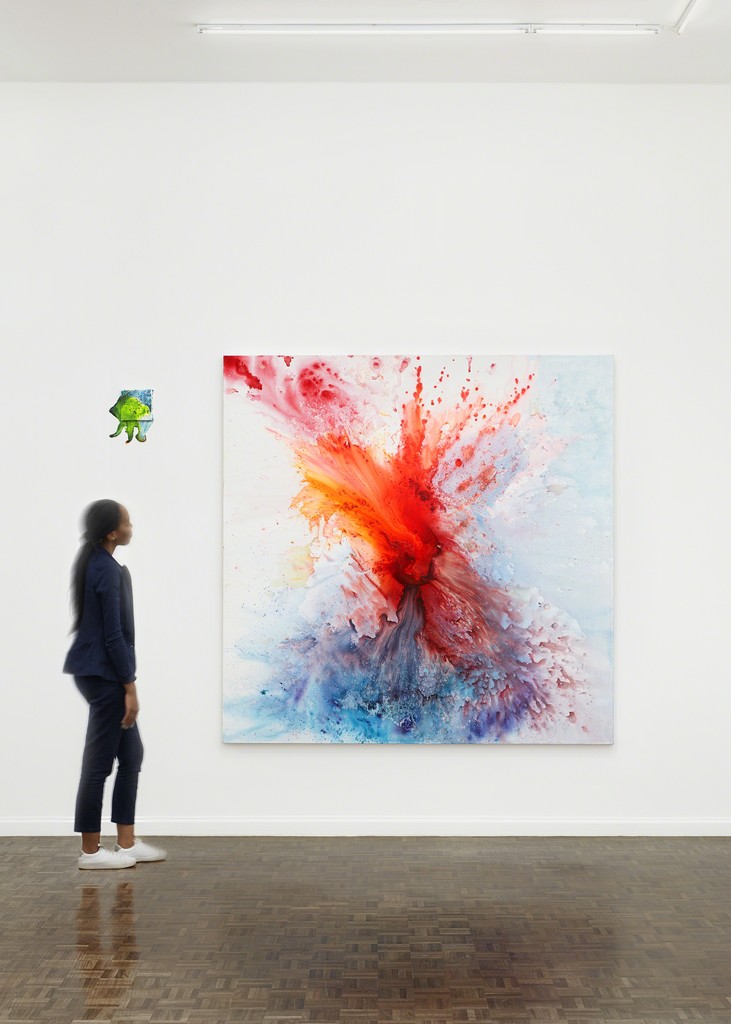 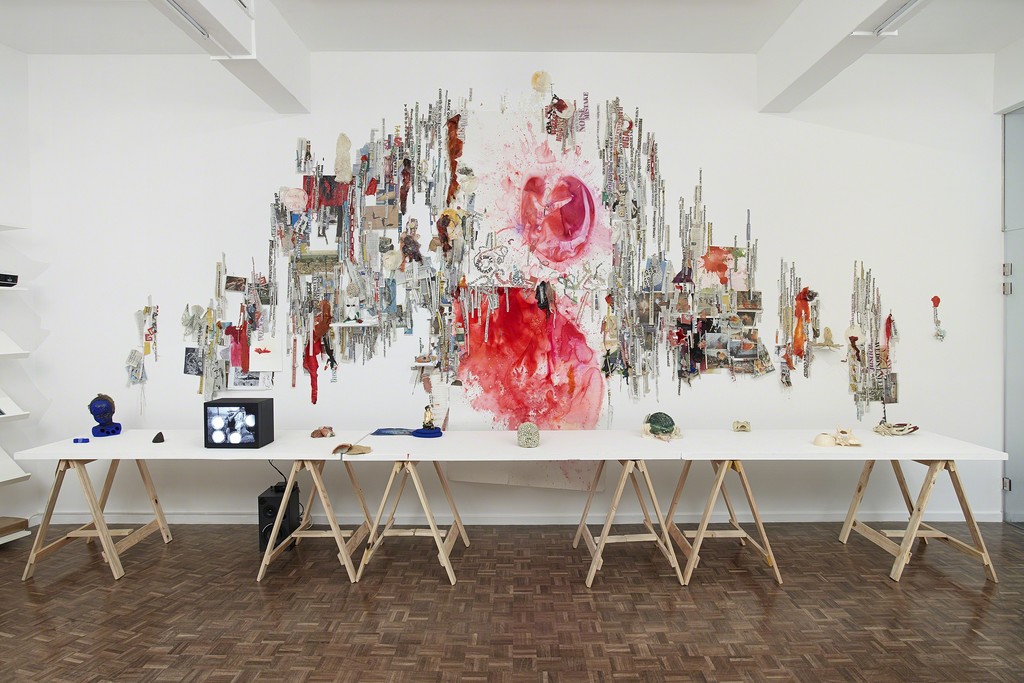 The works in this exhibition were made in response to an invitation to participate in Rising Waters: The Indian Ocean in the Twenty-first Century, a group exhibition at the McMullen Museum, Boston, in 2020. The show proposes to look at climate change and the migration of people, objects and ideas across the Indian Ocean. With Warm Water Imaginaries, Siopis responds to this vast history and complex geological and social present through the creation of imaginary worlds in small and large paintings, as well as object-assemblages and a new film in progress. While alluding to narratives and images that speak to climate change, the works’ open form, associative materiality and vibrant process invite the spectator to project their own imaginings. Siopis says:

The material process of the paintings is a fluid affair; the glue’s capacity to change its form and colour when it comes into contact with other forces – air, gravity, water, my gestures – imbues it with a presence that holds onto itself as ‘something other’, yet can simultaneously take on the guise of an image.
Central to the exhibition is an installation of small paintings on paper, a section of which is destined for Boston; these are mounted rather than framed, placed slightly away from the wall in emphasis of their objecthood. Siopis observes:

They all have glue and ink as their base, looking a bit like a membranous visual field. Many are actually old surfaces; seen with fresh eyes, something in their ground seemed to lie submerged. The process of seeing the ‘something’ emerge meant being hyper-open to the myriad associations of the medium; to the viscosity of the glue and how it captures the movement and vibrant colour of the ink, and what happens when oil paint joins the fray with its particular opacities and transparencies, slipperiness and crustiness. These material incidents – especially when they evolve into bits of figuration – have the potential to draw together wildly different states of being, real and imagined, dreams, history and myth, or stories from the realms of politics, philosophy, critical theory. Every material incident is a potential actor in this contingent process. Scale has a role too: the works are intimate, their microcosmic lives readily translating into macrosmic worlds – cataclysmic lumps of red and flashes of hazard orange colliding with stains of celestial blues. All these different things get woven into the same visual field, or sit next to one another in the installation, speaking across the page divide. Often apocalyptically. Sometimes lovingly. Always in some kind of relation.
This relation extends Siopis’ interest in the ‘life’ of non-human matter, which includes encounters with other creatures and elemental forces like the weather. The works become what the artist terms ‘viscous imaginaries’, possessing a material presence which bears the imprints of flux. The residues of process leave marks that have precarious boundaries, often making it difficult to determine edges of figures and shapes of grounds. Siopis asks:

With global warming, what do we imagine? Burning? Drowning? Absolute alterity? And what forms – or formlessnesses – do we imagine this through?
Old stories are often templates through which we imagine new worlds. One of Siopis’s references is the story of Paul et Virginie by Bernardin de Saint-Pierre, set on the island of Mauritius during French rule. As Siopis observes, that Mauritius is a tropical island makes it an ideal ‘figure’ through which to imagine the ‘ground’ of rising waters. The 18th-century novel is still seen by many as the foundational narrative of Mauritius; its prevalence was noticed by Siopis during a residency at the ICA Indian Ocean, St Louis, in 2016. A romantic fiction, it is nonetheless one that, critically re-read – along with other old stories – can speak to the political ecology of our day.

Such critical reworkings encompass writings on slavery and environmental concerns, leading Siopis to Amitav Ghosh’s recent book The Great Derangement: Climate Change and the Unthinkable. Warm Water Imaginaries gives expression to an attitude of amalgamation rather than dualism, with Siopis evoking the spirit of Donna Haraway’s words from her ‘Tentacular Thinking’: ‘We need stories (and theories) that are just big enough to gather up the complexities and keep the edges open and greedy for surprising new and old connections.’