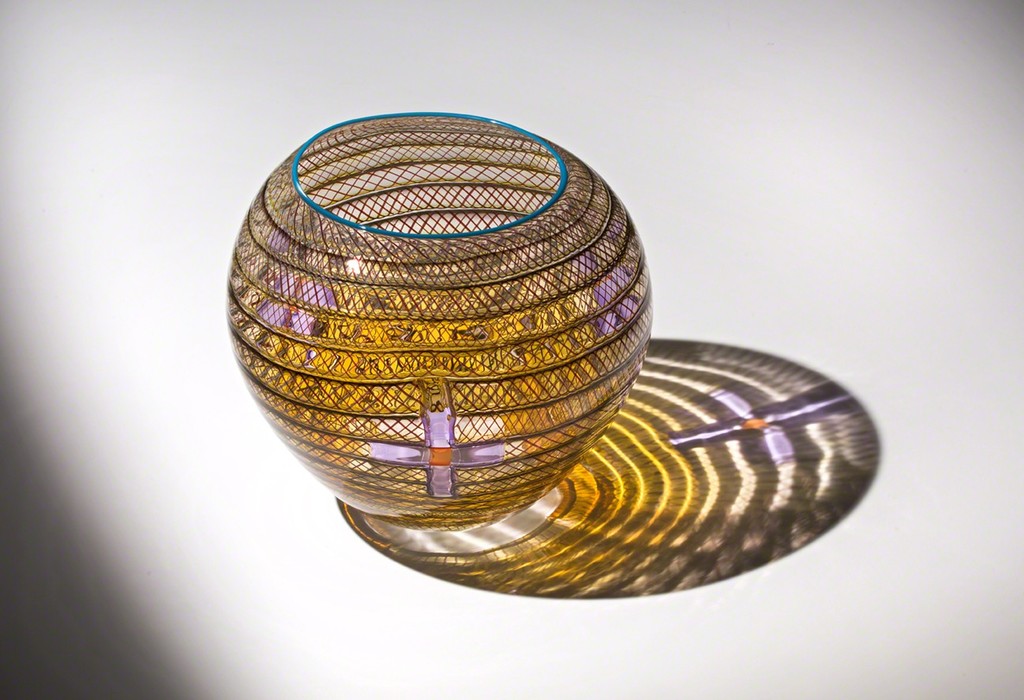 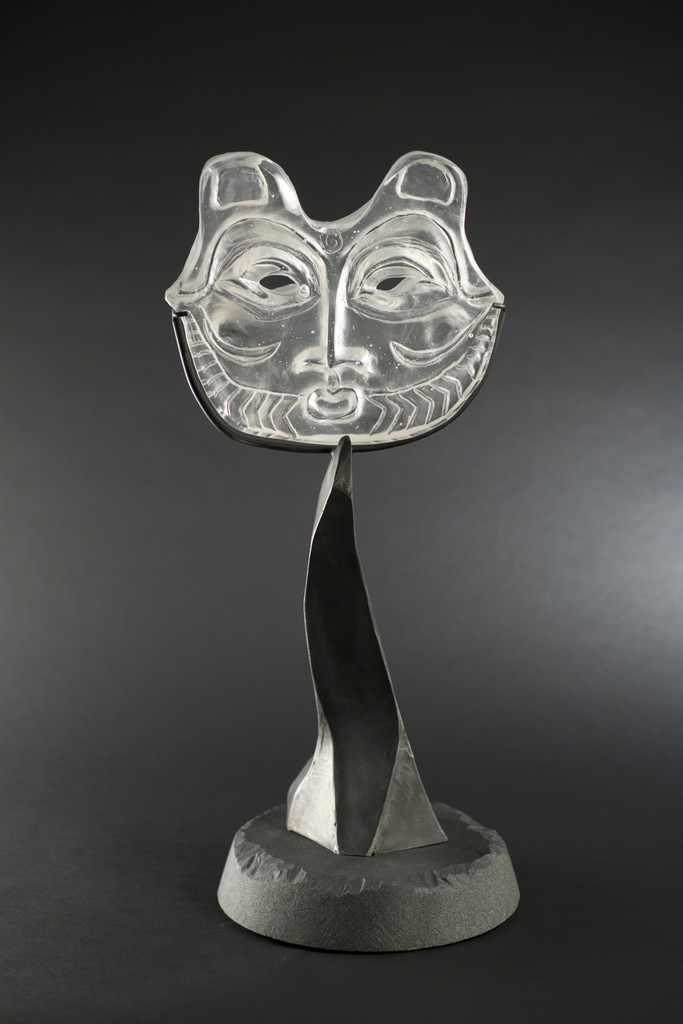 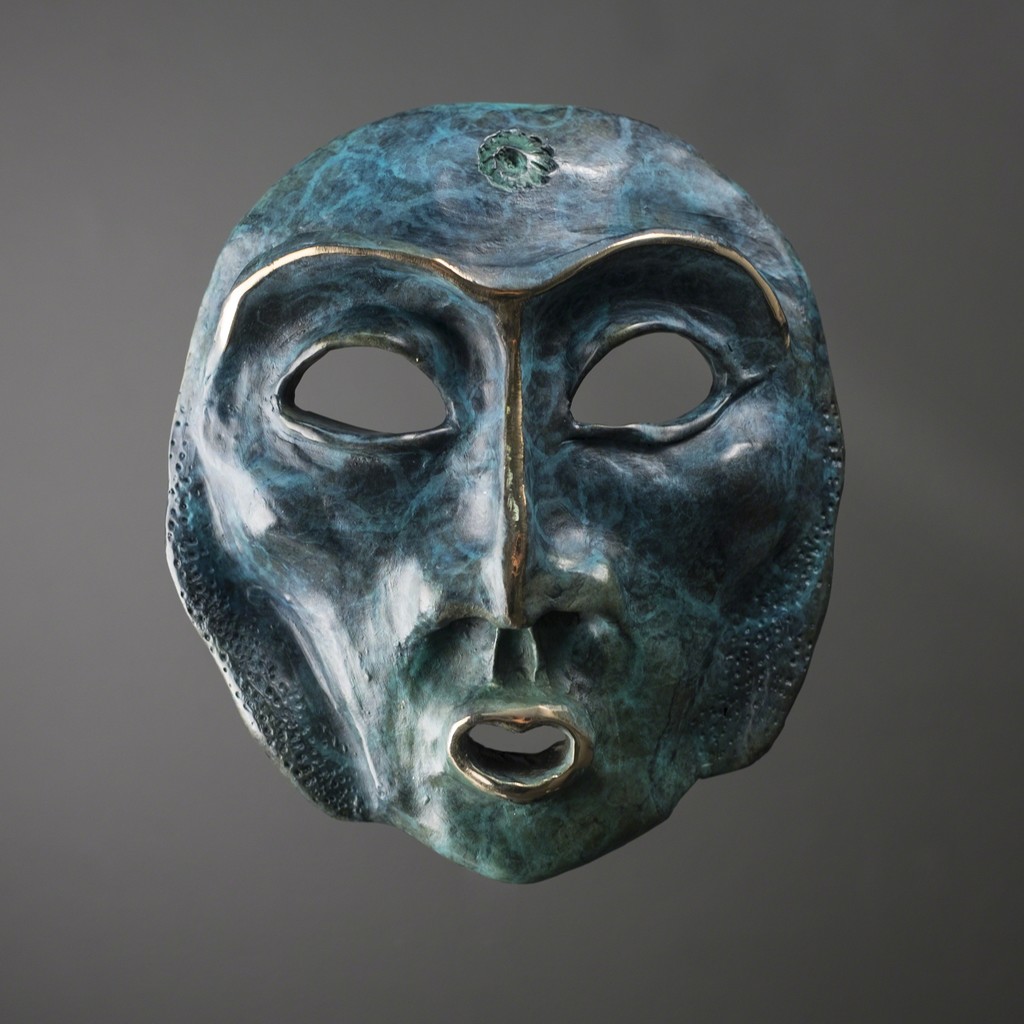 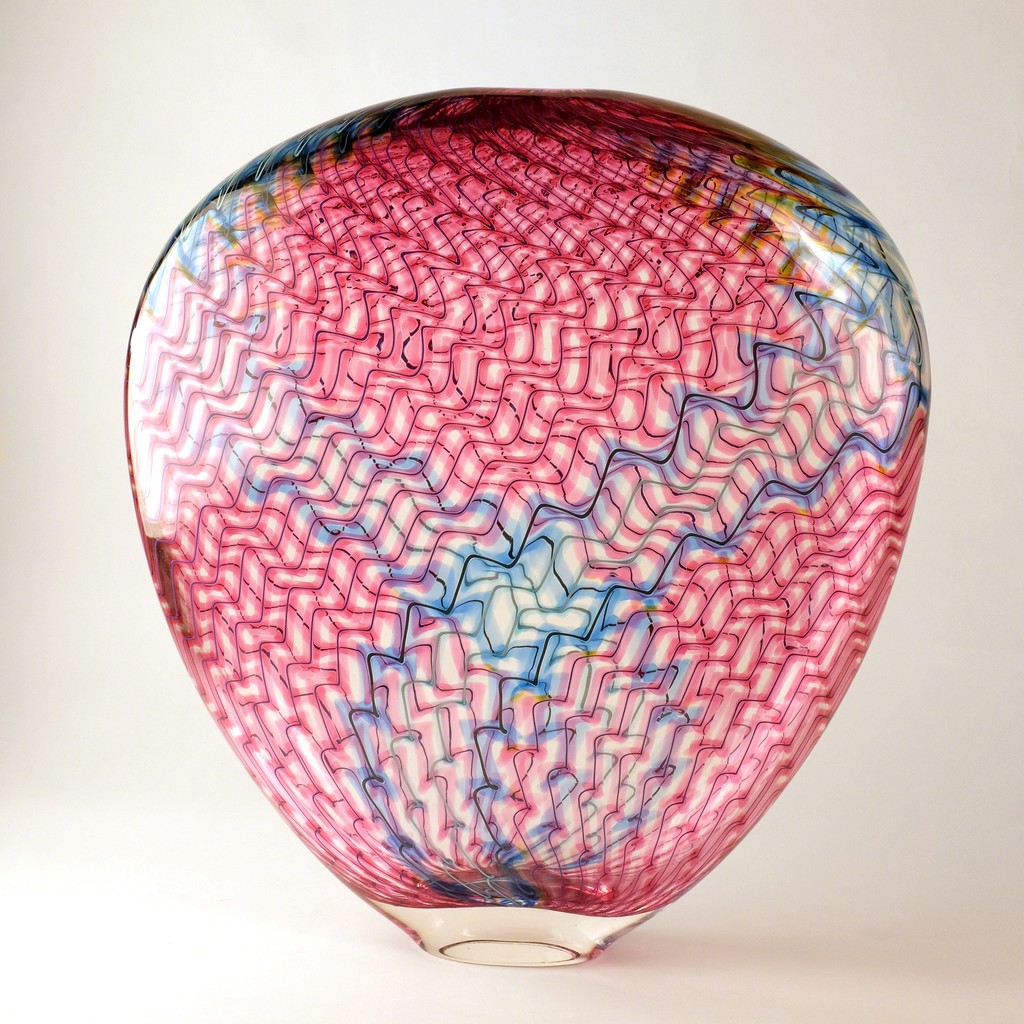 Artists Lillian Pitt (Warm Springs/Wasco/Yakama) and Dan Friday (Lummi) debut works in glass that were made collaboratively at a multi-day blow earlier in 2018. These are primarily basket or vessel forms that were blown and fused by Dan Friday under the direction of honored elder artist Lillian Pitt. Dan brought over twenty years of glassblowing experience, and Lillian brought the aluminum stencils based on Columbia River and Plateau designs that would be incorporated into each piece. By the end of the process the two had fused their concepts and vision together into a brand new series of rich, vibrantly colored vessel that reflect time-honored images from the artists’ ancestors.

The imagery on this new series of blown and fused glass baskets was directly inspired from two sources: twined imagery on traditional Wasco Sally bags, and the ancient pictographs and petroglyphs carved on rock walls in the Columbia River Gorge.

Wasco-style Sally bags are cylindrical, flexible bags made of grasses and fibers such as jute or hemp, and have been woven by the indigenous peoples of the Columbia Plateau in Oregon for tens of thousands of years. Over time, traditional fibers like dogbane and grasses have been augmented with new materials, including cornhusks, yarn, and even beads. Rims are often finished with leather, with loops to attach the basket to a belt. Sally bags could thus be used to carry and store roots and other foods, as well as medicines and personal items. Figures on the baskets could range from human to animal to spirits.

Petroglyphs (rock engravings) and pictographs (rock paintings) are an important part of the rich cultural heritage of the the Columbia River people. Archaeologists estimate that the oldest of them could be between 6,000-7,000 years old. At one time there were roughly 90 sites along the Columbia River, in the stretch of land between Pasco, Washington to the east, and The Dalles, Oregon, to the west. Many of these sites were either inundated or destroyed when The Dalles and the John Day dams were put into service, and are now lost to the world forever.

ABOUT THE ARTISTS
Dan Friday is a member of the Lummi Nation and a Seattle based glass artist. He has spent the last twenty years working for artists such as Dale Chihuly, Paul Marioni, Preston Singletary, and many others. Dan has also taught at the Pilchuck School of Glass. He has had residencies at the Museum of Glass in Tacoma, WA, and the Dream Community in Tai Pei, Taiwan. In addition, Dan is a recipient of the Discovery Fellowship through the Southwestern Association for Indian Arts. His work can be seen in galleries across the United States.

Lillian Pitt is a Pacific Northwest Native American artist whose ancestors lived in and near the Columbia River Gorge. The focus of her work is on creating contemporary fine art pieces that delight today’s art lovers, and at the same time, honor the history and legends of her people. Lillian works in a range of media, including clay, bronze, glass, mixed media, and jewelry. She has been the recipient of numerous art awards and awards of distinction for her efforts to help educate people about Native American lifeways and traditions.