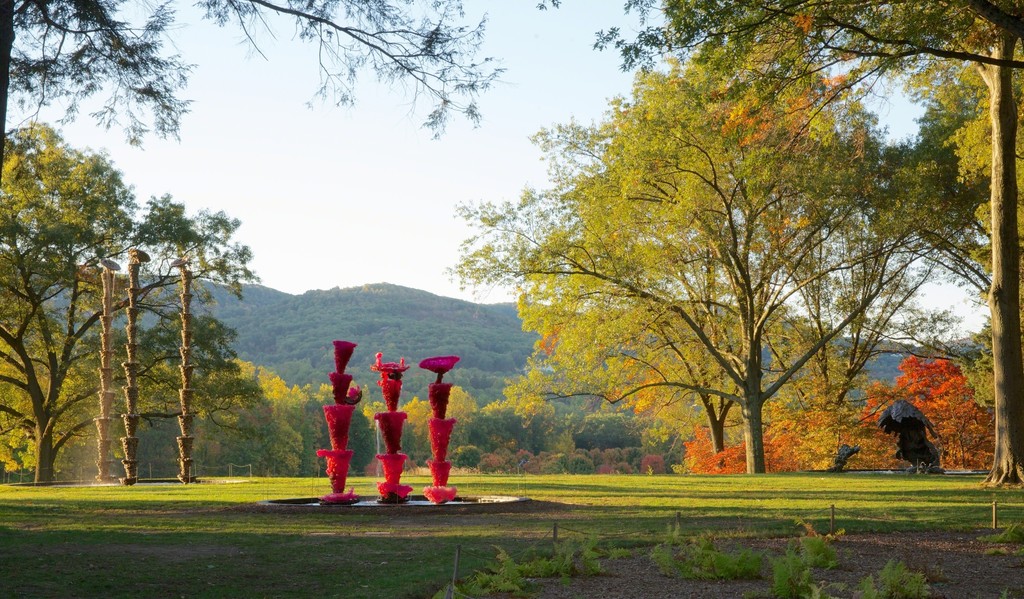 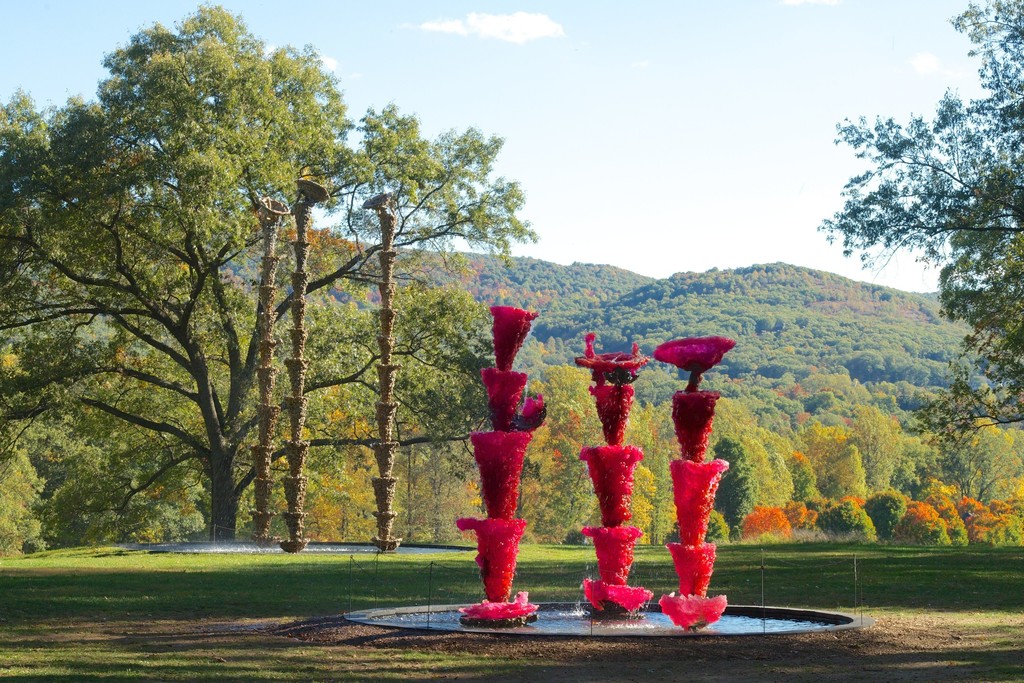 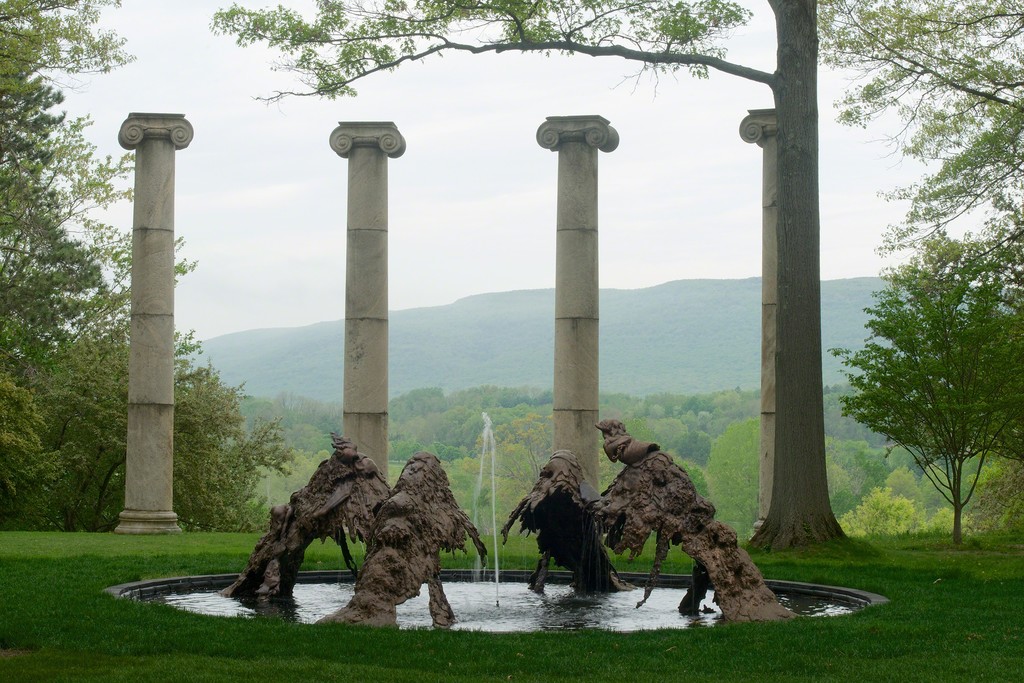 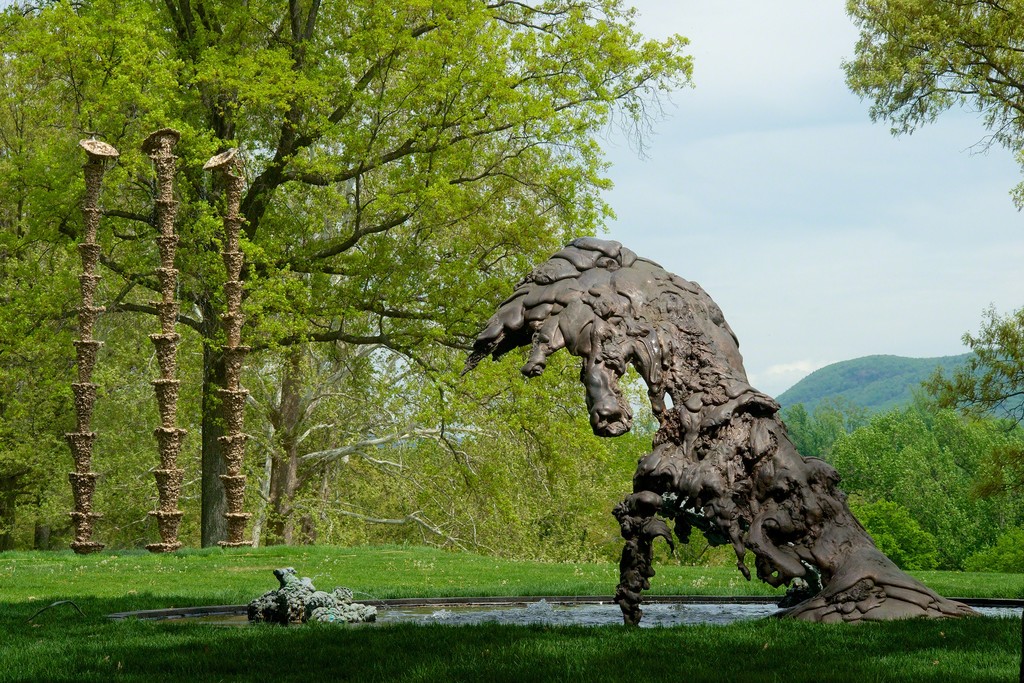 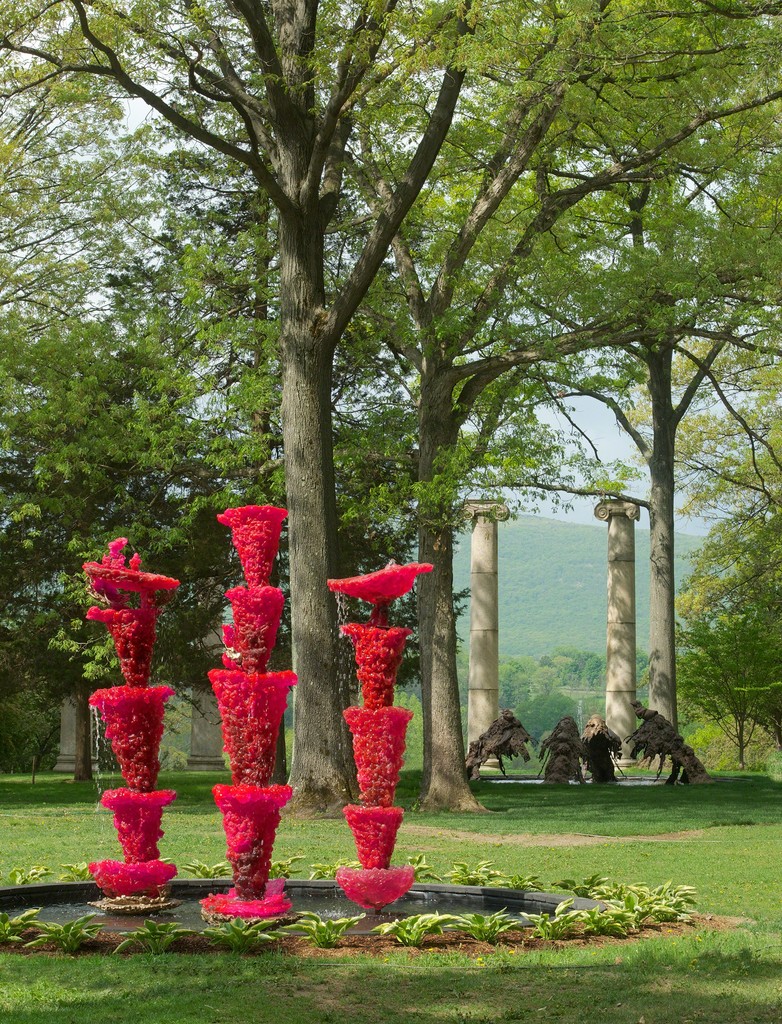 ‘Lynda Benglis: Water Sources’ is the first exhibition centered around the outdoor water fountains that the artist has been developing since the early 1980s. More broadly, this presentation takes as its point of departure the interest in water and landscape that Benglis has explored throughout the last thirty years of her career.

The exhibition includes more than a dozen outdoor sculptures, some recently created and on view for the first time, as well as a selection of sculptural works installed throughout six galleries in the Museum Building. Benglis has been represented in Storm King’s permanent collection since 1974, when ‘Nu’, a knotted work made that year that is part of a series of characters from the Greek alphabet (and which is on view in this exhibition), was acquired. ‘Lynda Benglis: Water Sources’ is the first exhibition to concentrate on and bring together a major body of outdoor work created by Benglis.

The exhibition is co-curated by Storm King’s Director and Chief Curator, David R. Collens, and Curator Nora Lawrence. Collens explains, “Lynda Benglis’s work has been an important part of Storm King’s permanent collection for many years and we are delighted to give visitors the opportunity to experience such an ambitious selection of her sculptures. The exhibition is inspired by the artist’s keen interpretation of landscape, and so Storm King is the perfect place for presenting Water Sources.”

Benglis says of working at Storm King Art Center, “I want to be there forever. It’s really a pleasure to be at Storm King—with the billowing grasses—I want to spend more time there. This is the first, and the first major, showing of the fountains as a group, and a nice setting for them.”

Many of the outdoor works are fountains—some created in bronze, and others in bright pink cast pigmented polyurethane—several of which have never before been exhibited publicly. Indoors, the exhibition will include works in bronze and stone made in the early 1990s, soon after Benglis established a residence in the Southwest.

These take the idea of landscape—in particular the rock formations of New Mexico—as their conceptual foundation, while the related exterior fountains meditate on the flow of water and the human body, as well as the idea of plenty and abundance. Also indoors will be large-scale works in cast pigmented polyurethane including ‘Swinburne Figure I (in pink)’ and ‘Black Ice (in black)’, as well as a selection of ceramic sculptures.

The main part of the exhibition is located on Museum Hill, just south of Storm King’s Museum Building. Four pools of water ranging in size from 14 to 24 feet in diameter hold three to four sculptural elements apiece, each flowing with water. To the east, three thin, tall fountains of bronze from 2015 entitled ‘Bounty’, ‘Fruited Plane’, and ‘Amber Waves’ stand together, with water flowing down their concentric, open blossoms. Two fountains in three parts, ‘Pink Ladies’ (2014) and ‘Pink Lady (For Asha)’ (2013), share a vivid pink hue, inspired by a kite Benglis saw at a festival in India. ‘Crescendo’ (1983–84/2014–15) is a large-scale, collaged bronze fountain with a 17-foot cantilever that Benglis recently completed, based on a mold of her first-ever fountain sculpture, ‘The Wave of the World’. ‘Crescendo’ stands in the same pool as the two-part work ‘Double Fountain’, ‘Mother and Child’, ‘For Anand’ (2007). To the west of this main area, in a smaller clearing that housed a decorative fountain many years ago, the four-part fountain ‘North South East West’ (1988/2009/2012–15) is arranged along these cardinal points.

Otherworldly landscapes, views of peaks and valleys, moss found growing on the underside of a fountain, and visions of clouds resulting from atomic explosions served as inspiration for the three small-scale fountains are shown on the Museum Building’s patio. The works on view date from 1974 to today, and range in scale from two and a half feet to 25 feet tall. A newly completed work will also be on view for the first time in Storm King’s South Fields, titled ‘Hills and Clouds’ (2015). The work glows in the dark and will be featured on Storm King’s periodic Moonlit Walks. Two other bronze works, ‘Migrating Pedmarks’ and ‘Cloak-Wave Pedmarks’ (1998), were important to Benglis’s thinking about fountains and will greet arriving visitors near Storm King’s main entrance. Formed from clay skins, these were cut from large blocks of clay pressed onto underlying plaster and subsequently cast in bronze. The resulting cloaked figures retain the imprints of Benglis’s fingers and call to mind the accounting of a prehistoric event.

The exhibition is on view till November 8, 2015. A fully illustrated catalogue of the ‘Lynda Benglis: Water Sources’ is available for purchase in Storm King Art Center’s museum store and on its website: http://shop.stormking.org/