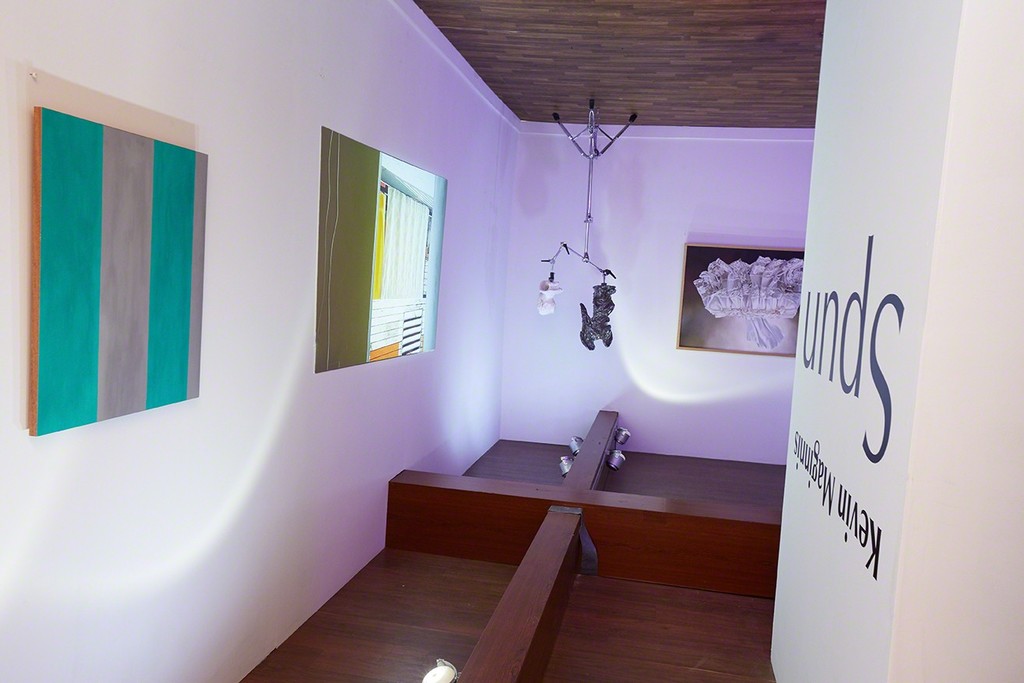 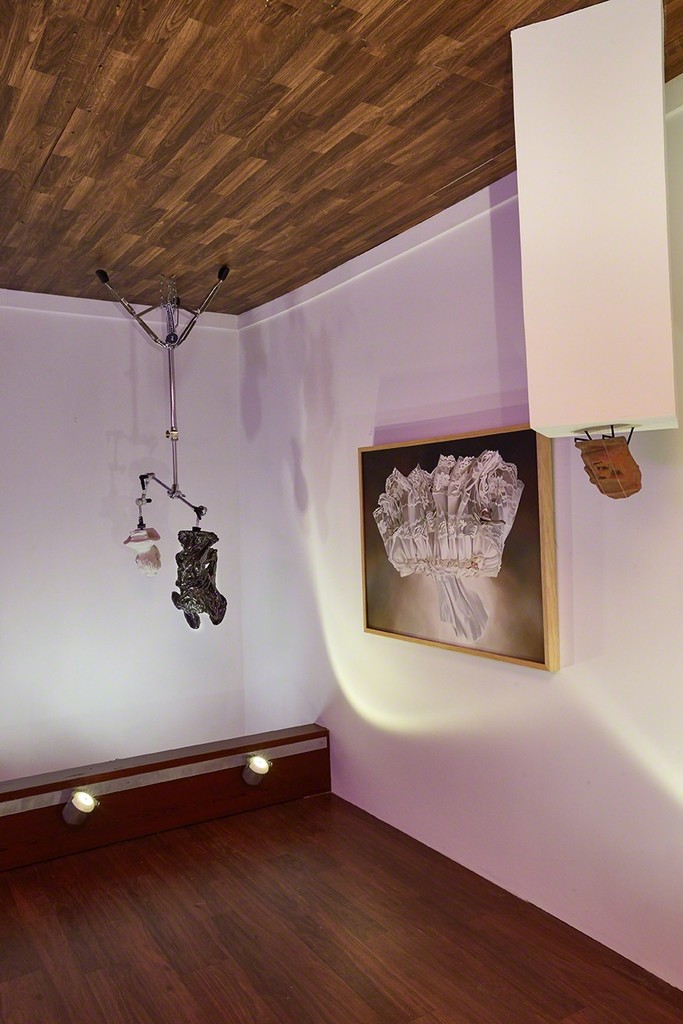 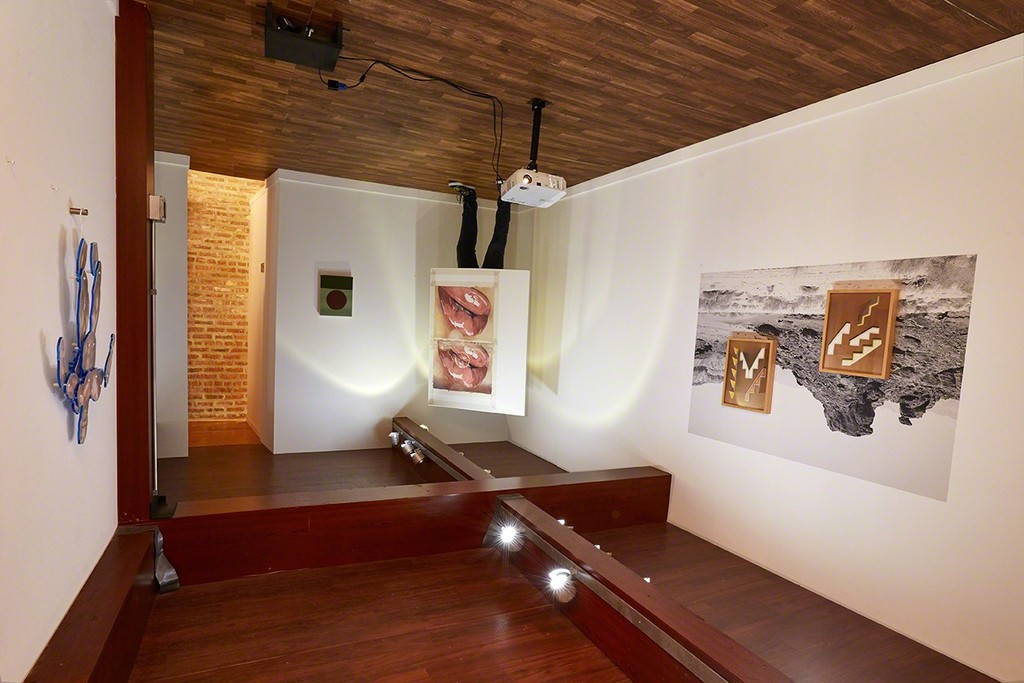 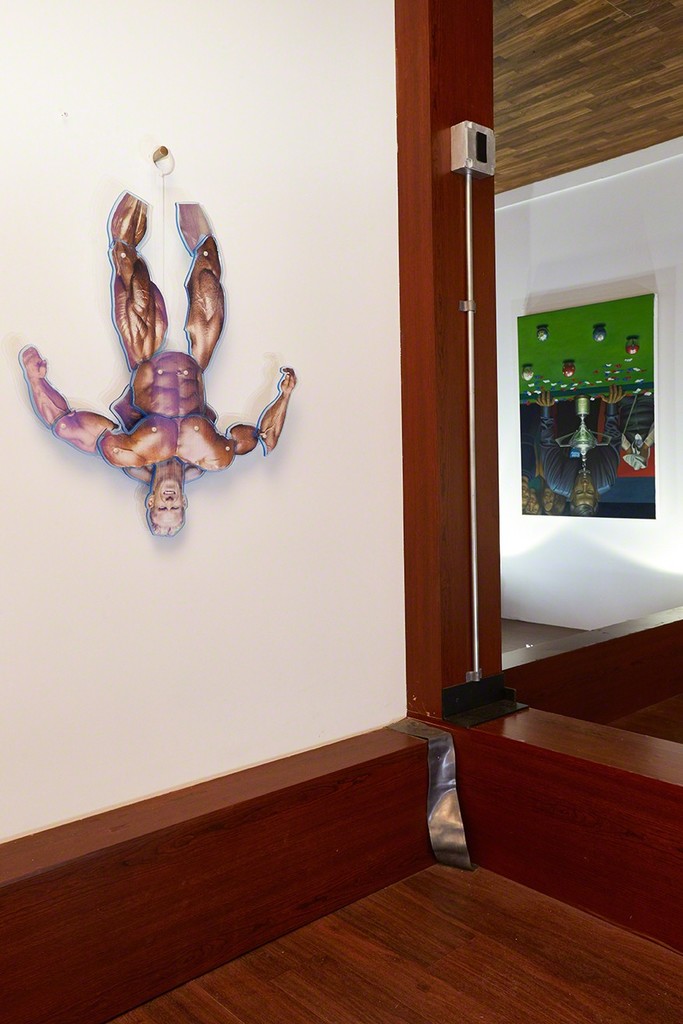 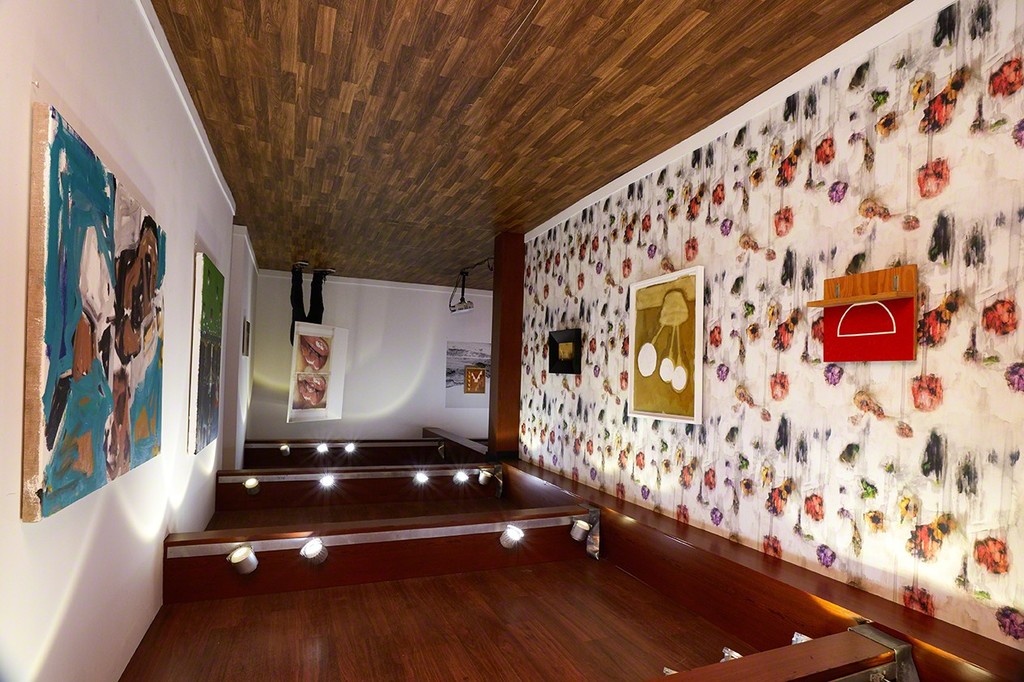 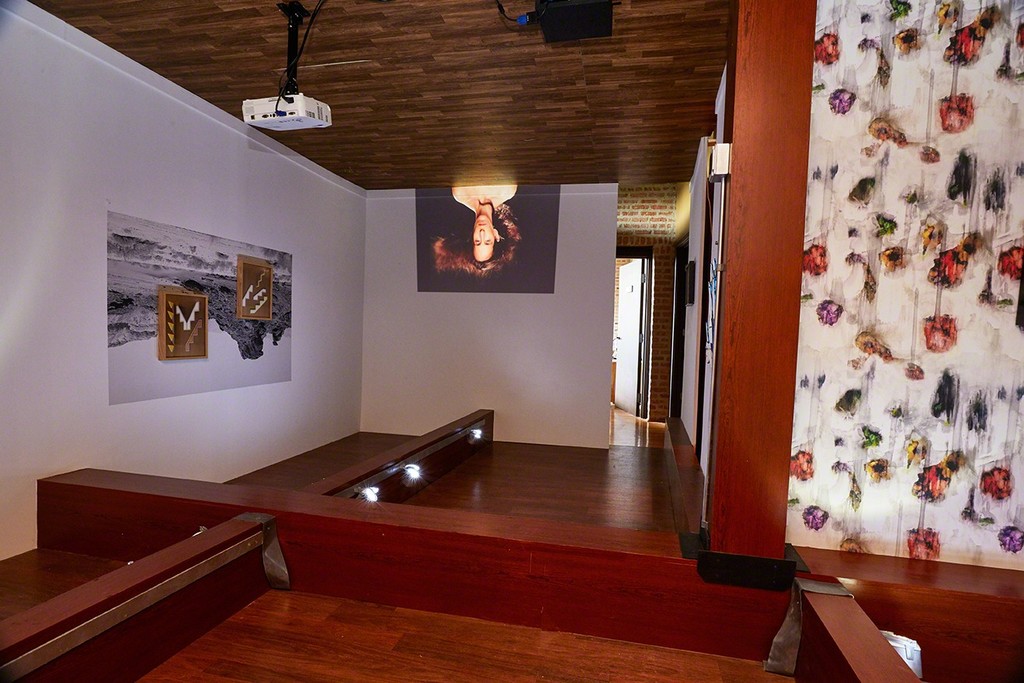 Stuart & Co. Gallery is proud to present 'Spun', a collaborative installation by Kevin Maginnis that seeks to explore the presence of a gallery space as an object itself by recreating the entire surface of the gallery out of non-architectural materials, then flipping this faux gallery space upside-down and rotating it by 30 degrees. This endeavor brings together the work of 20 artists displaying their pieces inverted to highlight the question of
how the object and presence of the gallery has changed and what affect this distorted space has on the artwork it houses.

In prior works such as 'Stair Flight Double' and 'Untitled (The Suburban Installation)', Maginnis toyed with concepts of appropriation and spatial relationships. This investigation evolved from an architectural contemplation to an exploration of space as having history and identity. The concept of 'Spun' was heavily influenced by such
contemplations, as well as the philosophy of Graham Harman and the Buddhist belief in causal linkage.

Maginnis’ manipulation of space as an object brings forth the hypothesis that space as delineated by the designed environment holds certain attributes: object as function, object as presence, and object as space-time. Object as function is an obvious quality of any commercial gallery space as it is what gives rise to the formal definition of
an art gallery as exhibiting, promoting, and selling artwork. Object as presence is a bit more nuanced as a single work of art can be perceived differently in the context of various gallery spaces. Object as space-time is the most subtle of properties as to be entirely invisible unless under extreme gravitational influence. By turning the gallery and artwork upside-down, Maginnis has subverted the traditional presence of a gallery while at the same time bringing us to question its organic functions. By twisting the gallery and allowing the effects of gravity to be seen on the artwork, Maginnis alludes to the distortion of space-time.

These notions are further magnified when tied to the wide range of artwork spanning genres, locations, and time periods that Maginnis intentionally sought to include. From established artists Tony Tasset and B. Wurtz to emerging artists Tommy Mishima and CD Wu, ancient Pre-Columbian artifacts to video and sound installations
from the current year, Spun develops into a microcosm of sorts. Certain works seem particularly responsive to being spun. For example, Milwaukee artist Nicholas Frank’s 'Greatest Skips (Inverted)' presents a vinyl record played on a turntable which, when inverted, never allows the needle to touch the record as the arm hangs limply under the weight of gravity. On the contrary, Los Angeles sound artist Banrei’s 'as lyrical getting lyrical', which deconstructs individual words to sub-consonants and sub-vowels and rearranges them in the form of classic Chinese poetry, is clearly unaffected by the altered space.

Interestingly enough, the physical installation tends to fall to the background as it is the artwork that draws the viewer’s attention to the concepts being addressed. In this manner 'Spun' challenges the notion of “artist as hero”. As Maginnis states, “One of the most pleasurable aspects to doing this show has been working with all of the artists and letting them have as much fun working with this idea as I was. My contribution is the physical installation, which is in a sense invisible…it's as if the exhibition is a choir, not a solo performance.” Here the ephemeral is made solid, and the culminating result is to experience the notion of what an exhibition is as a whole, fresh and anew. The full list of featured artists can be found below.

Maintaining a contemporary vision, Stuart & Co. Gallery strives to represent emerging and mid-career artists at the forefront of expression. Since its inception in 2012, Stuart & Co. Gallery has been home to innovative, pioneering exhibitions across a multitude of media and genres. The gallery embraces multidisciplinary, interdisciplinary
and cross-genre art forms in addition to traditional practices.

Please join Stuart & Co. for the opening reception of Spun on Saturday,
Spetember 24th, 2016, from 7-9pm. For more information or to preorder your copy of the exhibition catalogue, please contact Britney Lipton at (312) 487-1850 or via email at [email protected].