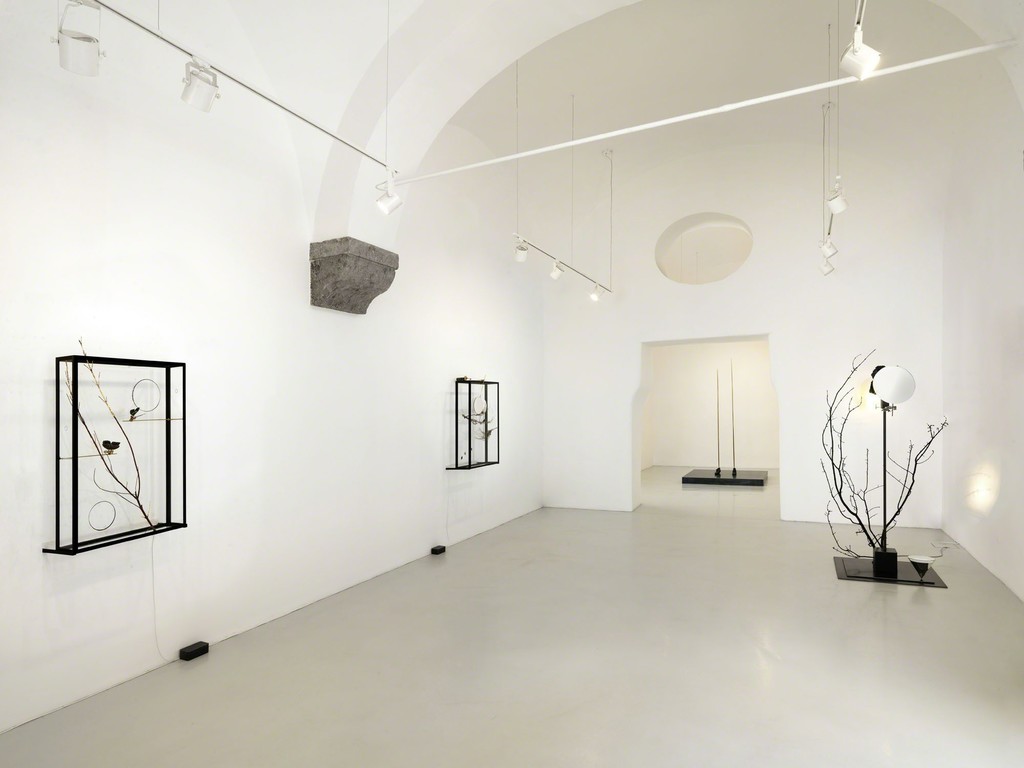 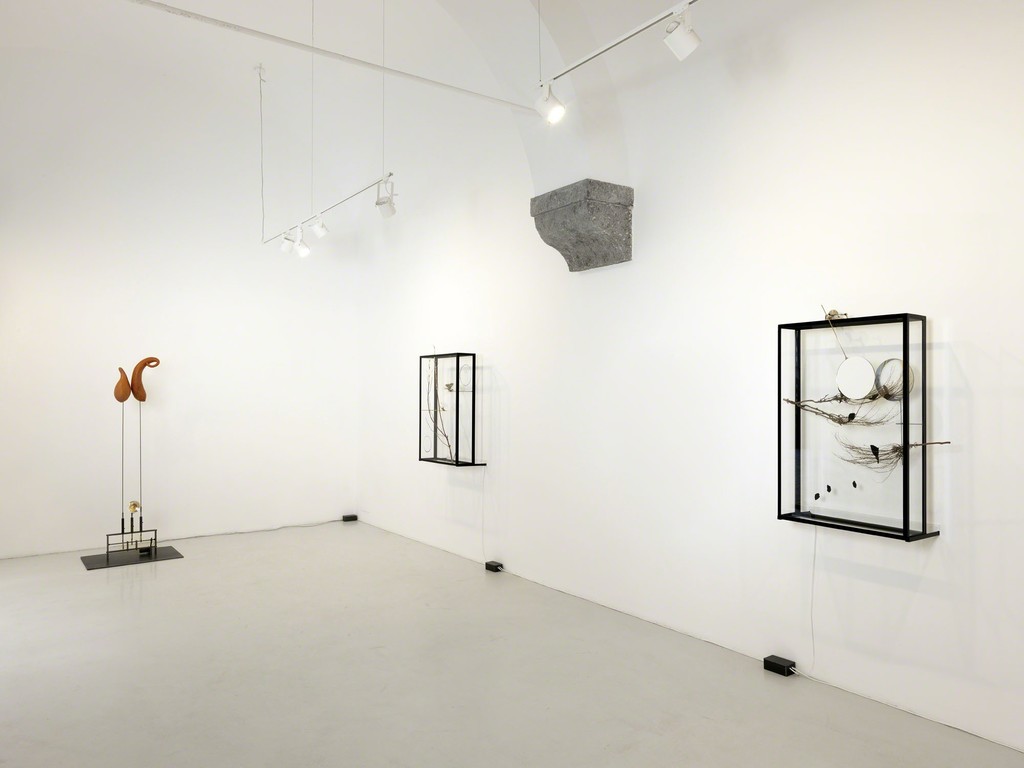 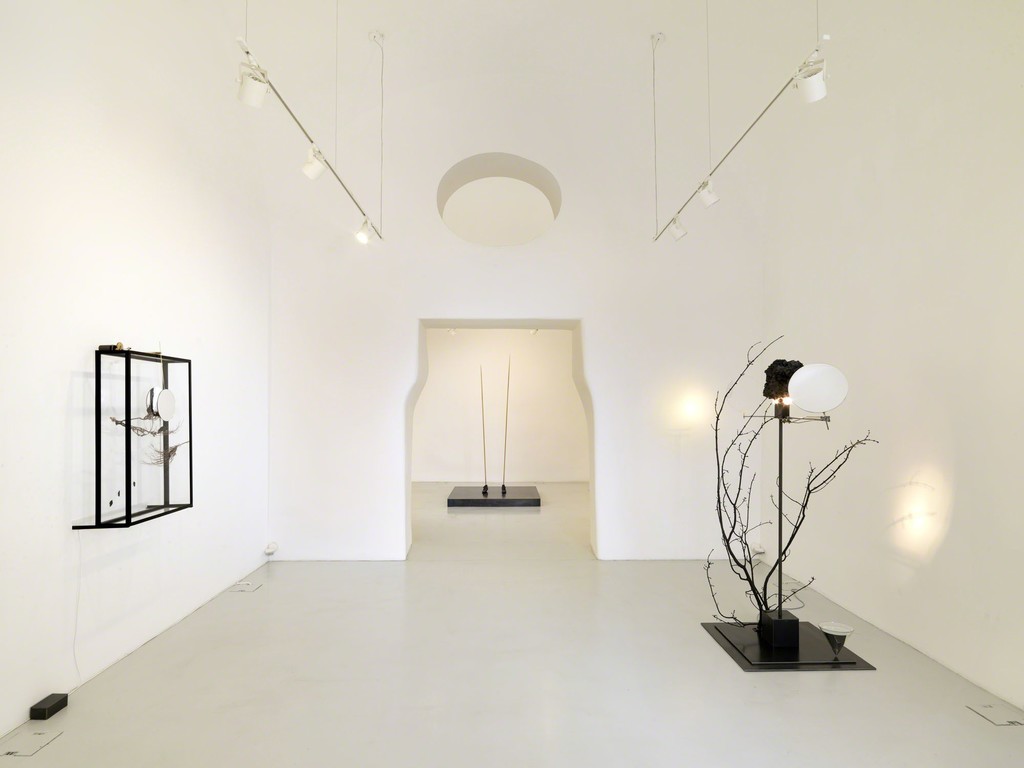 Friday, the 11th of May at 7.00 p.m., the Studio Trisorio, located at Riviera di Chiaia 215, will host the inauguration of Rebecca Horn’s solo exhibit entitled Passing the Moon of Evidence.

The exhibit features six new, large and medium sized mechanical sculptures as well as drawings of various dimensions in which Horn pursues her exploration of the profound issues of human existence, the passage of time and cosmic energy.

In the showcases for which the exhibit, Passing the Moon of Evidence, was named, mechanical wings of butterflies open and close in a dreamlike atmosphere, suspended over volcanic rocks or between golden-tipped branches; two circular mirrors, symbolizing the reoccurring dualism in the artist’s poetics, evoke the movement of the sun and the moon as well as the relationship between male and female principles in cosmic equilibrium.

In the work entitled Aus dem Mittelalter entwurzel, two brass rods of varying heights attached to a pair of medieval styled shoes, sway back and forth, approach but never touch each other, in a metaphor to the cadenced passage of time.

A round mirror and a circular-shaped piece of glass, positioned next to a piece of lava stone, reflect light and breathe life into the work entitled Im Kreis sich drehen: rhythmic movements are transmitted into the space between one sculpture and another, thus creating a continuous, incessant dialogue.

A versatile, polyhedric artist, during the course of her long career Rebecca Horn has experimented with multiple forms of art. Sculpture, painting, drawing, installations, photography, cinema and performances are the expressive means with which she has always conducted her research in an innovative manner.

The exhibit will be open to the public until September 10.

Biography
Rebecca Horn was born in Michelstadt, Germany in 1944. She has exhibited in leading international museums and has participated in some of the last decade’s most important exhibits, ranging from Documenta in Kassel (1972, 1977, 1982 and 1992) to the Venice Biennale (1980, 1986 and 1997). Her works are held in major museums such as the Solomon R. Guggenheim Museum of New York, the Tate Gallery in London, the Centre Pompidou in Paris and the Nationalgalerie in Berlin. One of her site-specific installations is part of the permanent collection at the Madre Museum in Naples. In September of 2016, Rebecca Horn became a member of the “Orden pour le Mérite für Wissenschaften und Künste”, one of the Federal Republic of German’s highest honours for artists and scientists. In June of 2017, she was the first woman to receive the prestigious Wilhelm Lehmbruck Prize, in recognition of her work and poetics which have profoundly influenced the art of sculpture between the 20th and the 21st centuries. She has been represented in Italy by Studio Trisorio since 2003.