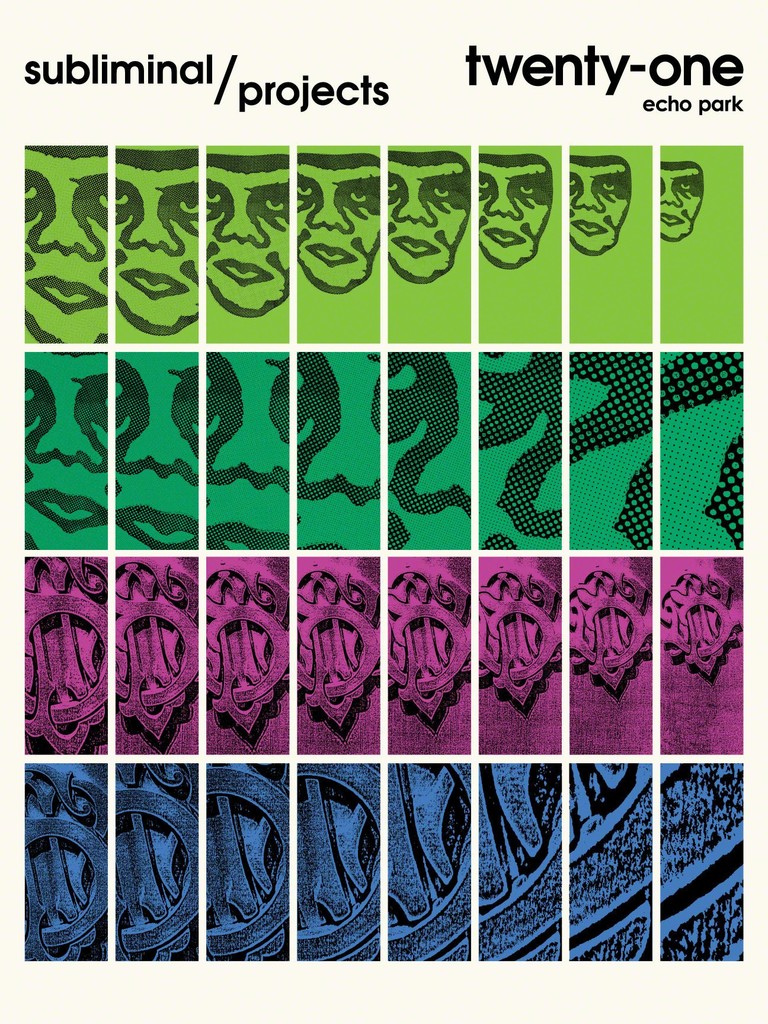 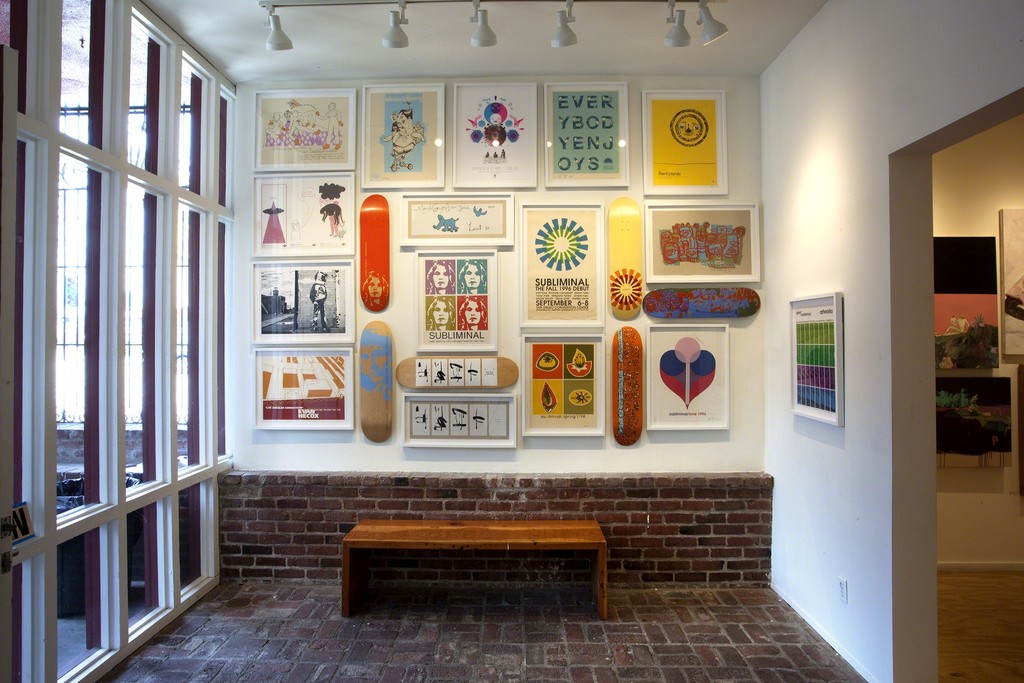 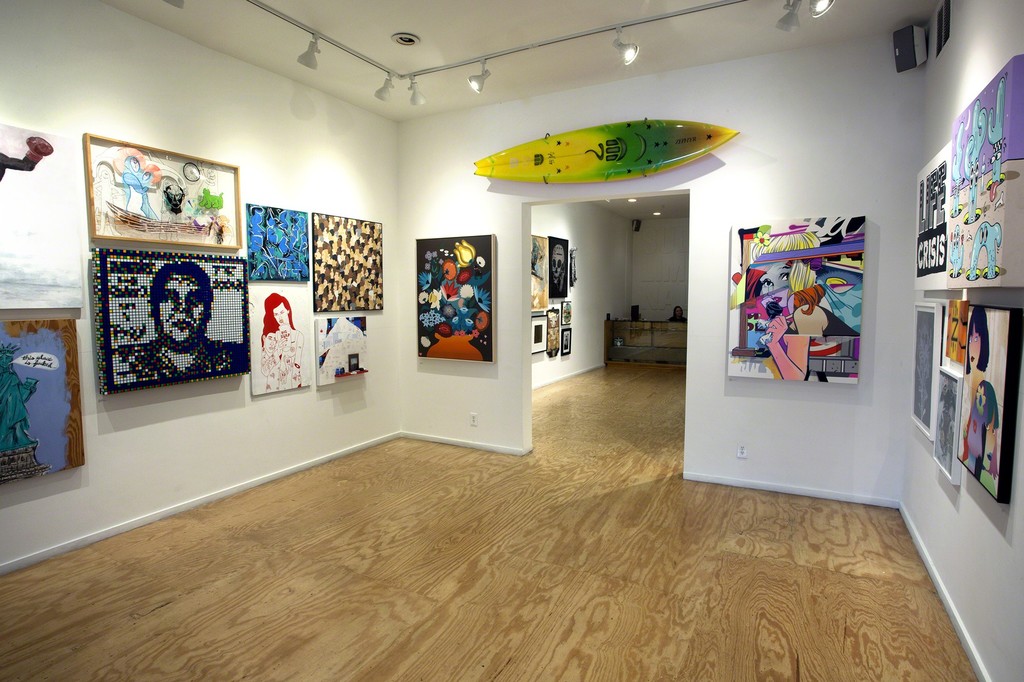 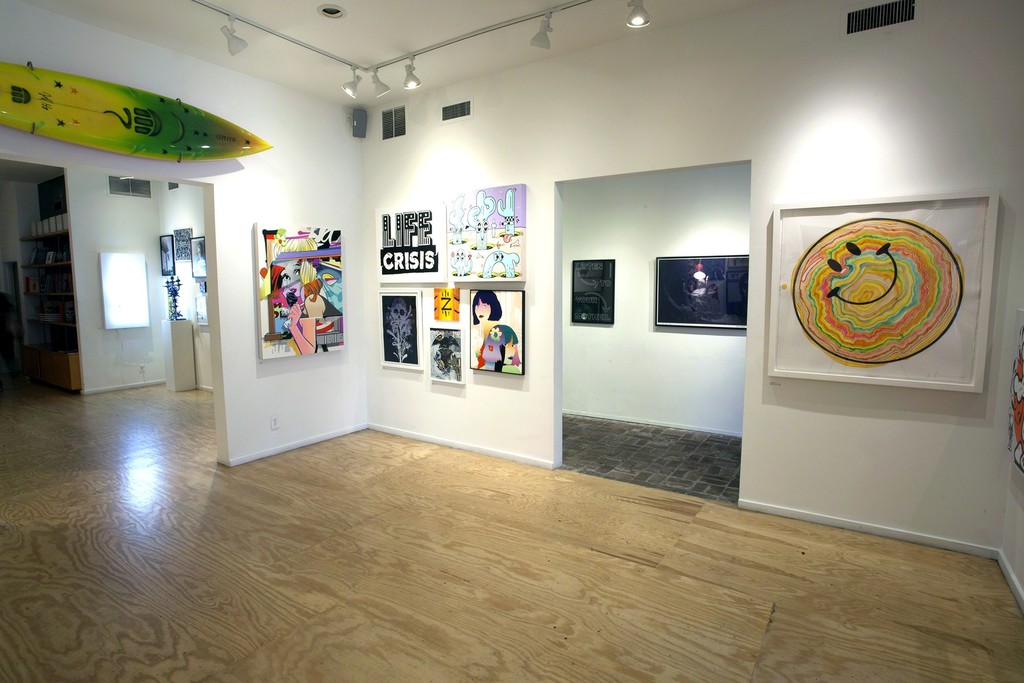 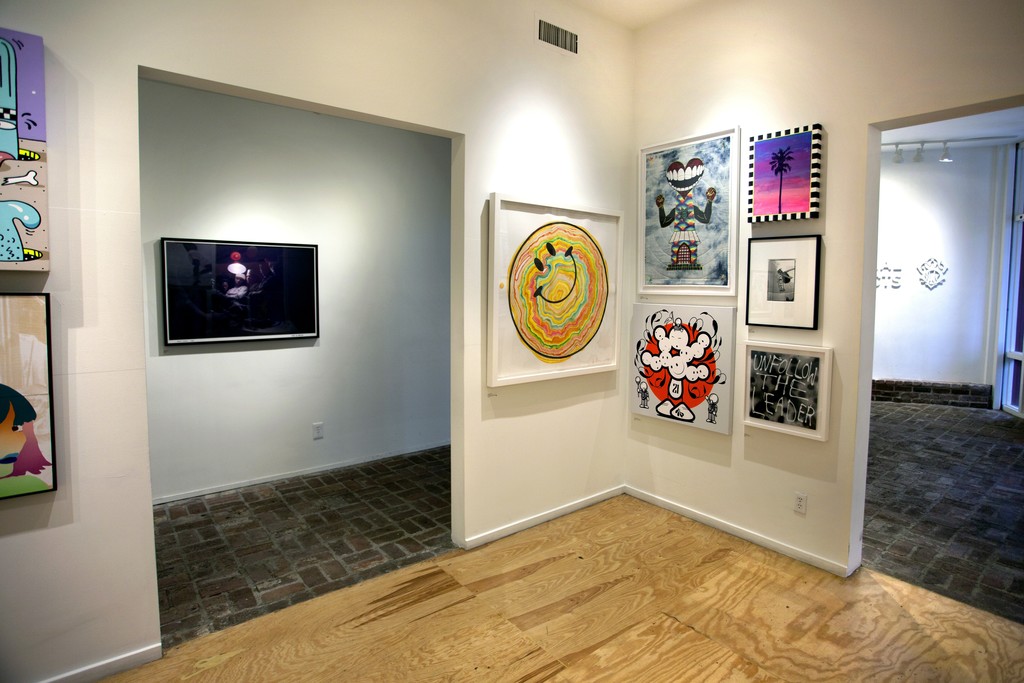 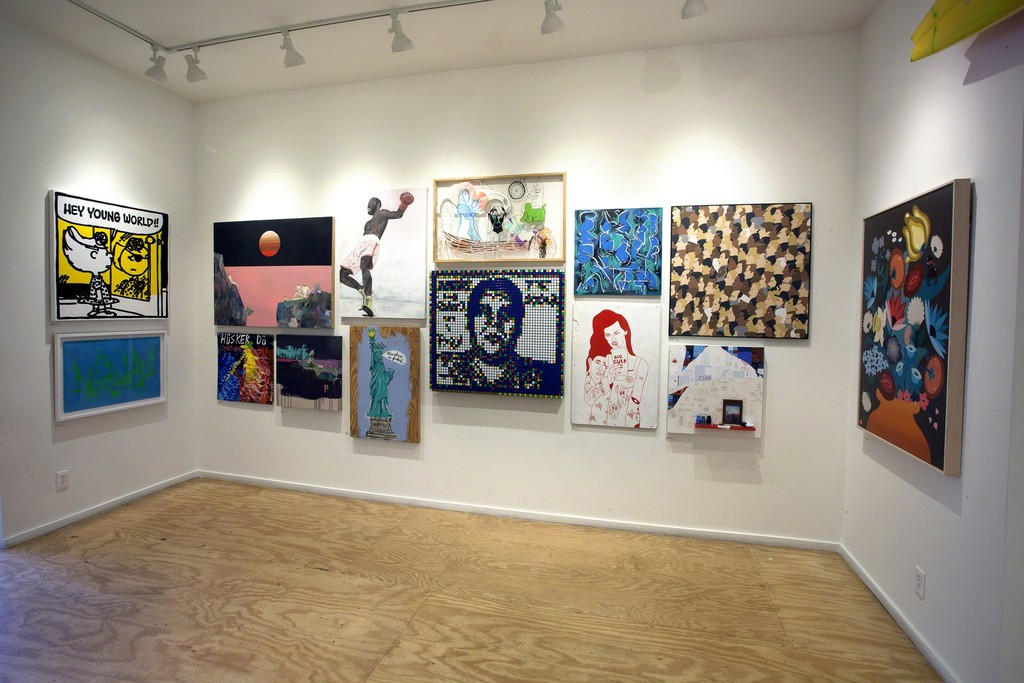 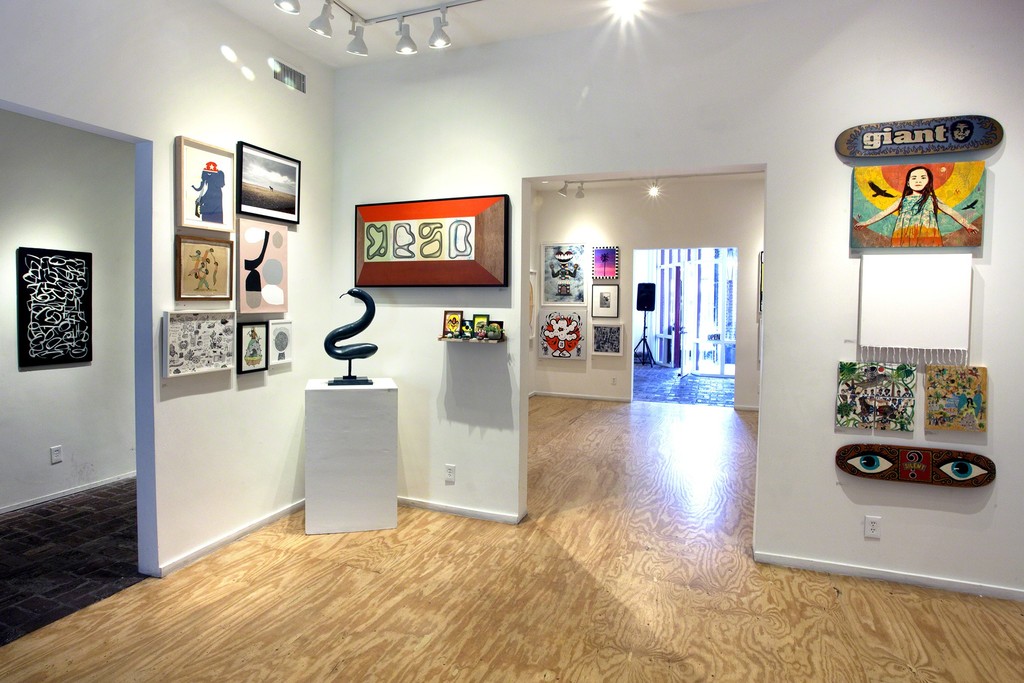 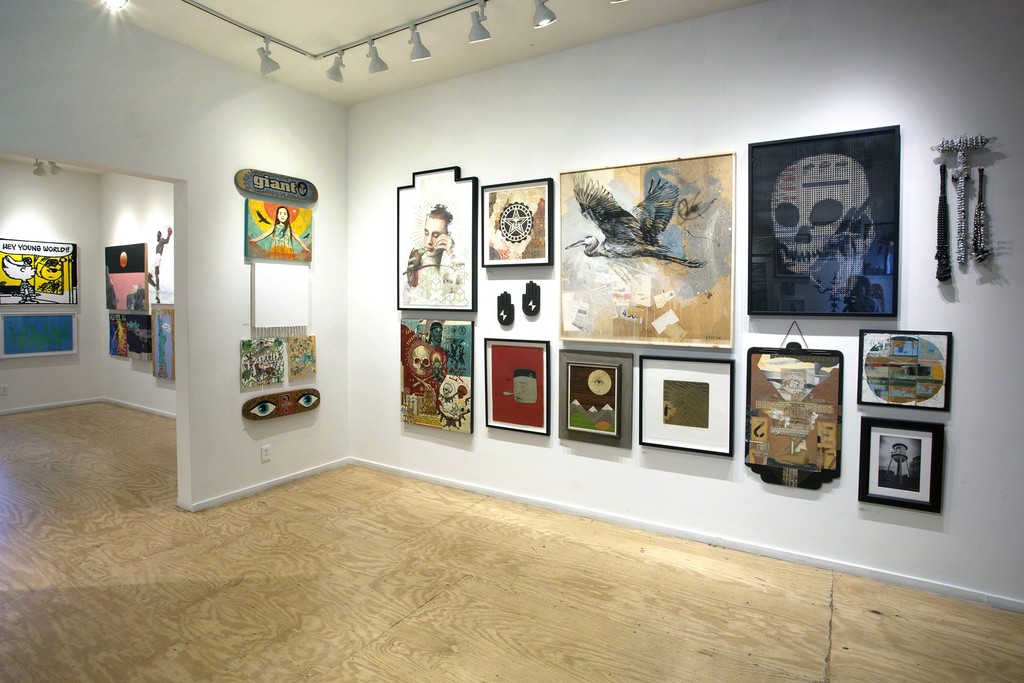 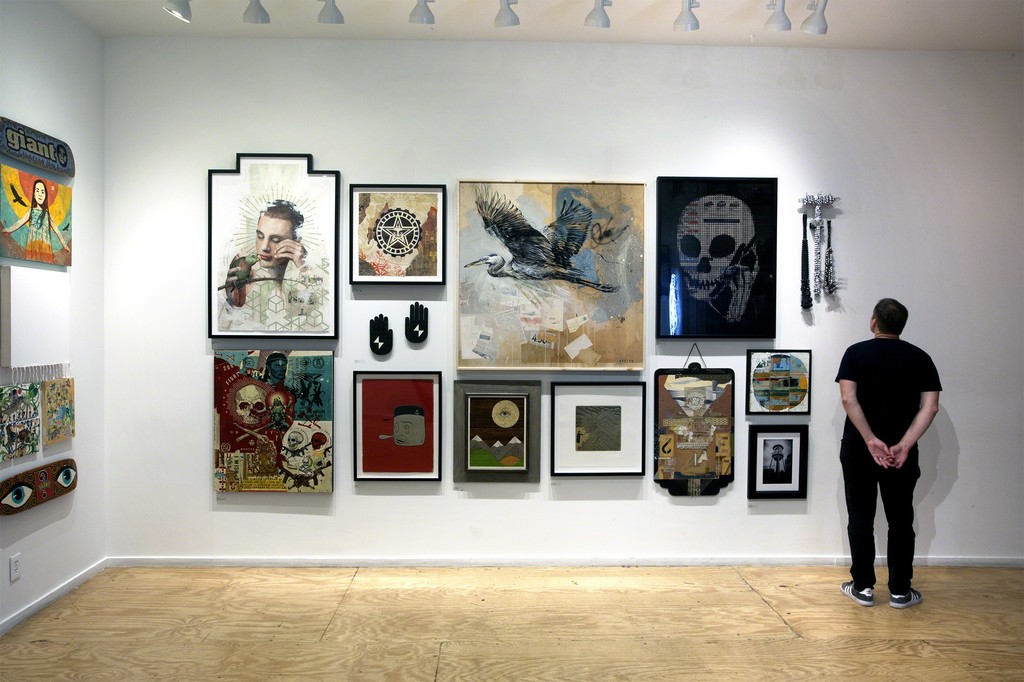 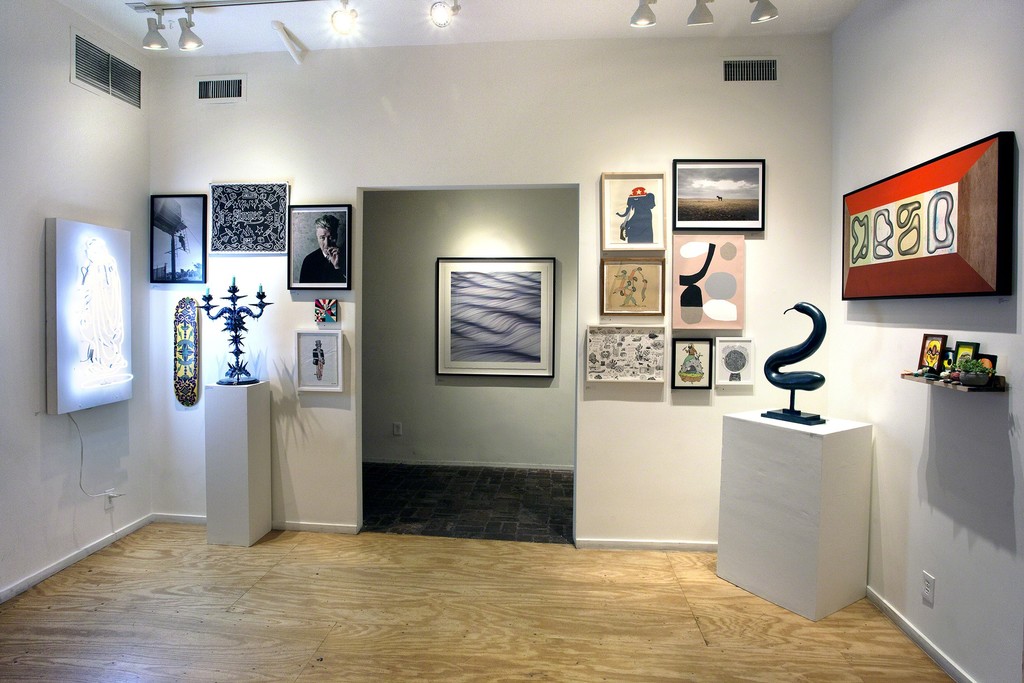 “The driving principle of Subliminal Projects is that art should be accessible to everyone and that art can come from many different perspectives and cultural niches. Good art is good art, whether it’s done on an album cover, a skateboard, canvas, or found cardboard.” – Shepard Fairey

Echo Park- Subliminal Projects is proud to present TWENTY-ONE. Subliminal Projects enters its 21st year celebrating with a large-scale salon style group show. The exhibition features mixed media works from over 50 artists, as well as past print and product collaborations that defined Subliminal’s beginnings as an artist collective.

In the mid to late 90’s the breadth of skateboarding had unreservedly evolved from a singular focus on skateboarding as a sport to an all-encompassing creative culture, in which art played an integral role. Inspired by the rise of the many key artists who made a profound but little-recognized impact on skateboard culture, Shepard Fairey, Blaze Blouin and Alfred Hawkins created a skateboard and apparel company, that they coined Subliminal, highlighting collaborations with those artists.

“We chose the name Subliminal because art was a crucial part of skateboard culture but was never highlighted as the focus,” said Shepard Fairey. “We looked at the name as an acknowledgment of that and a bit of a way of identifying ourselves as underdogs.”

In addition to collaborating with artists on product-based works, Subliminal began producing fine art prints, shedding new light on skateboard and t-shirt graphics as a valid form of fine art. Tapping into the artist network exhibiting at Aaron Rose’s Alleged Gallery in New York, Subliminal produced print collaborations with artists including Thomas Campbell, Mike Mills, David Aron and Andre Razo creating an intersection between skateboard art culture and the contemporary art gallery domain. In the following years, recognition of these artists continued to grow and gain notoriety by both mainstream and commercial art institutions, most notably in the Beautiful Losers: Contemporary Art and Street Culture exhibit, curated by Aaron Rose in 2005. The exhibit toured museums around the US and Europe and was an important milestone that recognized the importance of this group of artists that Subliminal helped champion ten years prior.

While curating exhibitions was not always the main focus of Subliminal, it has been an essential part of its narrative. The first exhibit curated under the Subliminal name was in late December of 1995, at a deli in South Carolina. Eventually Subliminal found a physical home in Los Angeles in 2003, sharing a space with Fairey’s creative agency office, Studio Number One, located in the historic building of The Wiltern Theater. With resources available to produce exhibitions, the re-named Subliminal Projects continued to define its mission of bridging the gap between the fine art world and subculture artists that merit a forum to show their work, congregate, and have a good time.

Now in Echo Park, Subliminal Projects identifies as an extension of its primary philosophy, while embracing new forms of graphic art, illustration, photography, and time-based media. The perennial schedule includes art exhibitions by established and emerging artists, as well as pop-up collaborations, a lecture series, workshops and artist publications.

TWENTY-ONE seeks to evoke the types of DIY style shows, which were the bedrock of Subliminal’s early exhibitions, showcasing the artists that are fundamental to the gallery’s past, present, and future.

This exhibition was made possible with the support of OBEY Clothing.

SUBLIMINAL PROJECTS is a multifunctional gallery space promoting diverse forms of art while providing a forum for contemporary dialogue. It was established by Shepard Fairey and Blaize Blouin in 1995 and played an integral part in introducing skateboarding culture and design to the art world. Now located in the historic neighborhood of Echo Park, SUBLIMINAL PROJECTS continues to offer a platform for artistic exploration and innovation. Gallery hours are Wednesday through Saturday from 12 to 6 pm.

OBEY CLOTHING is a lifestyle apparel brand developed in 2001 by artist Shepard Fairey. Built off of heritage fundamentals from military design, skateboarding, music and cultural movements, OBEY Clothing weaves a story of experience and appreciation for those that came before and those that stand out with originality today. OBEY celebrates the disenfranchised and the brave, the people that think and express themselves uniquely and aren’t afraid to do something different It’s about experience and observation.