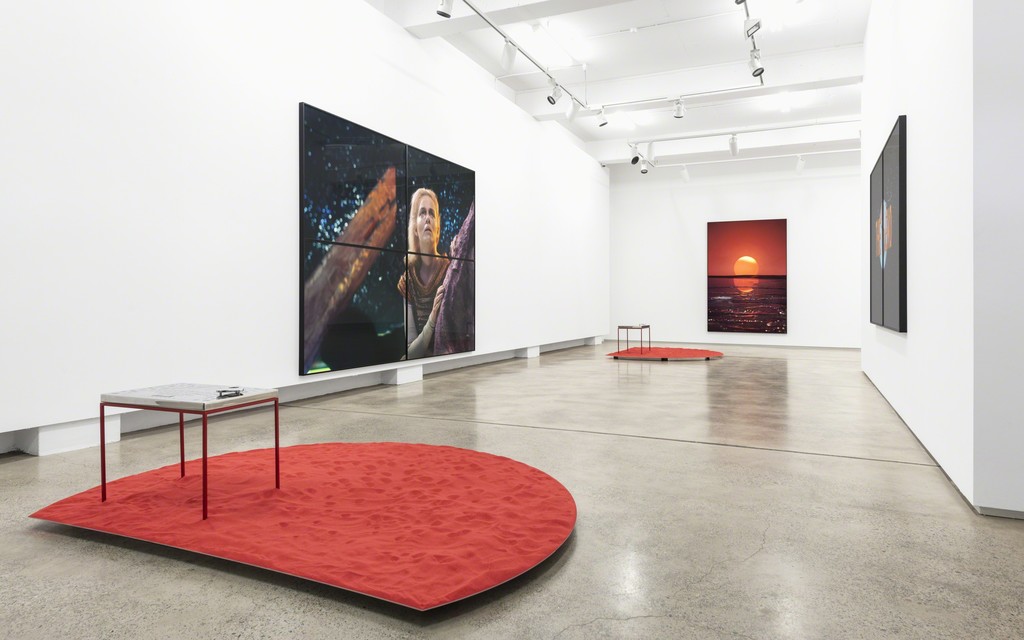 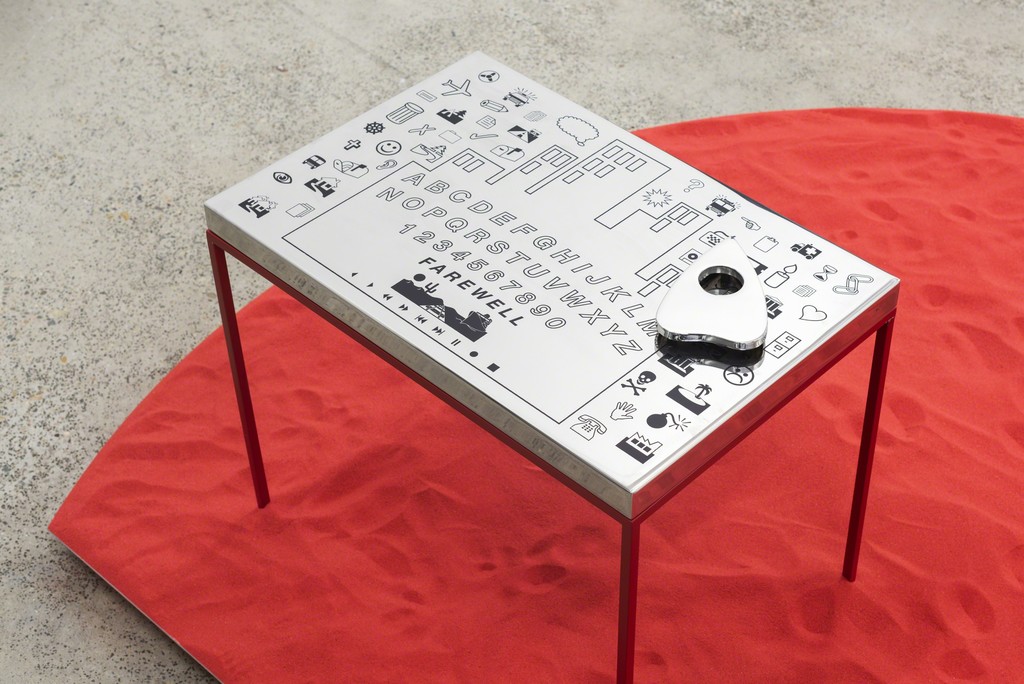 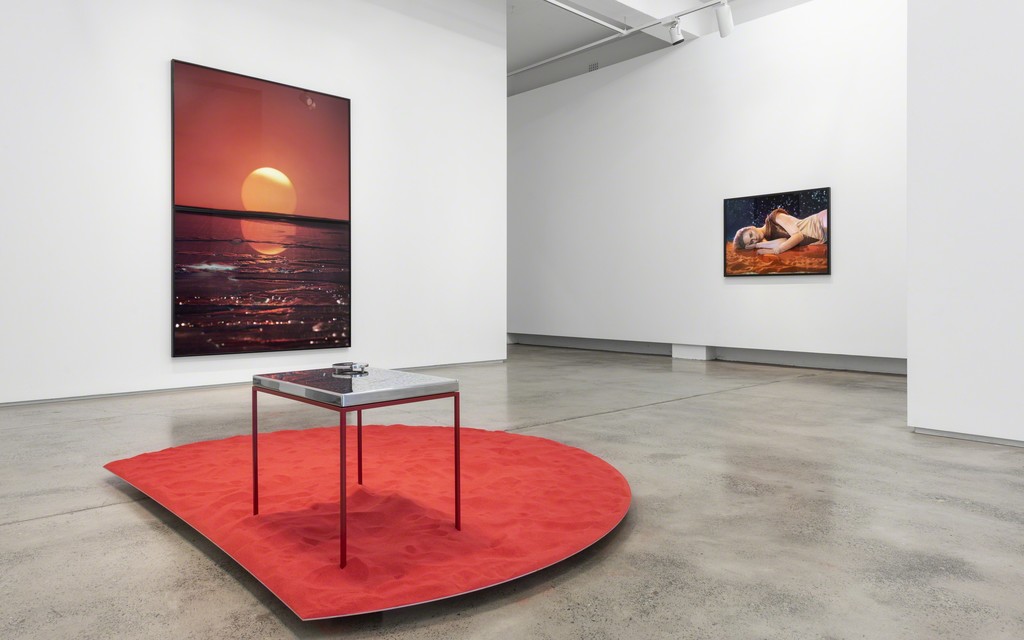 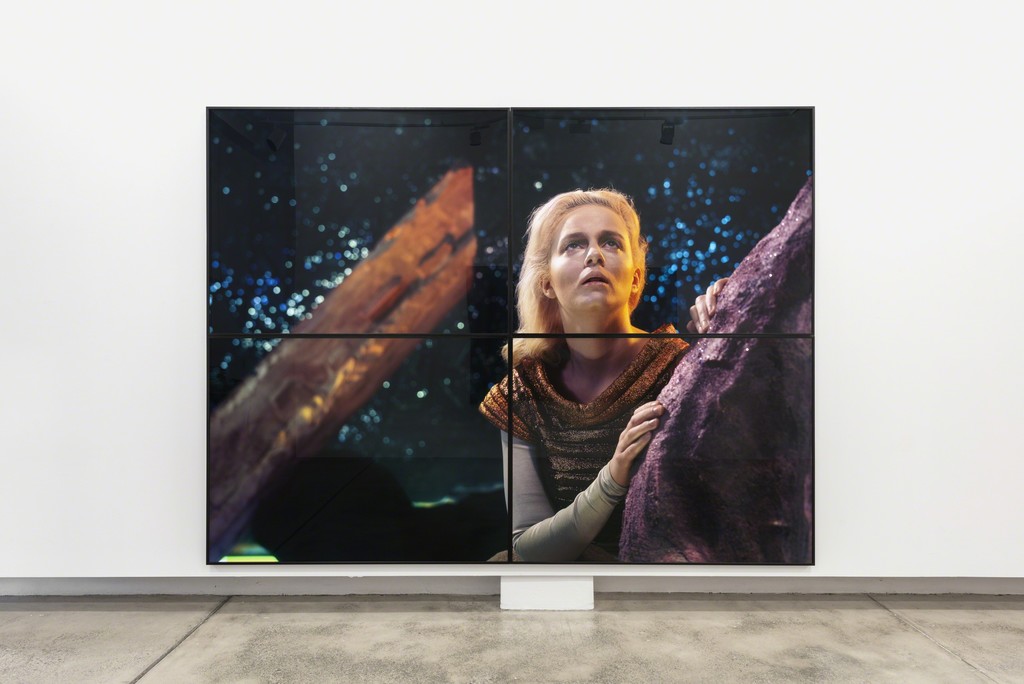 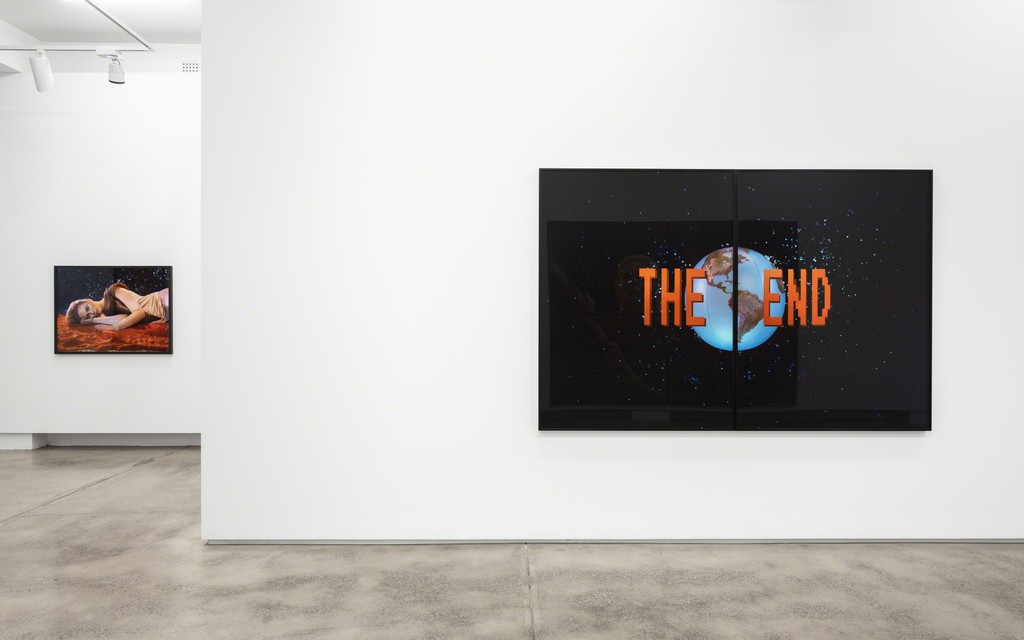 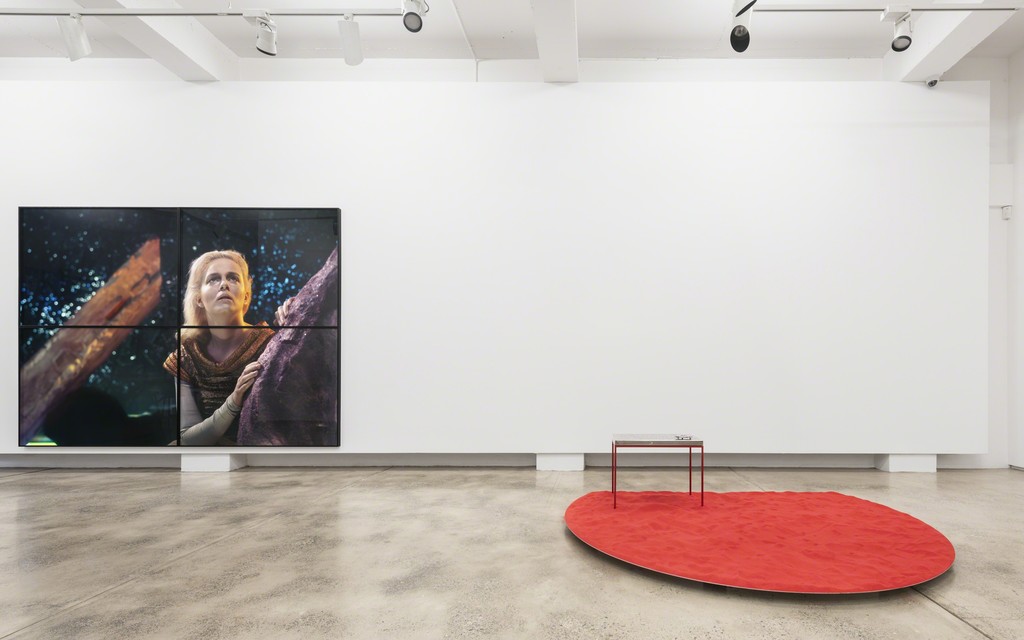 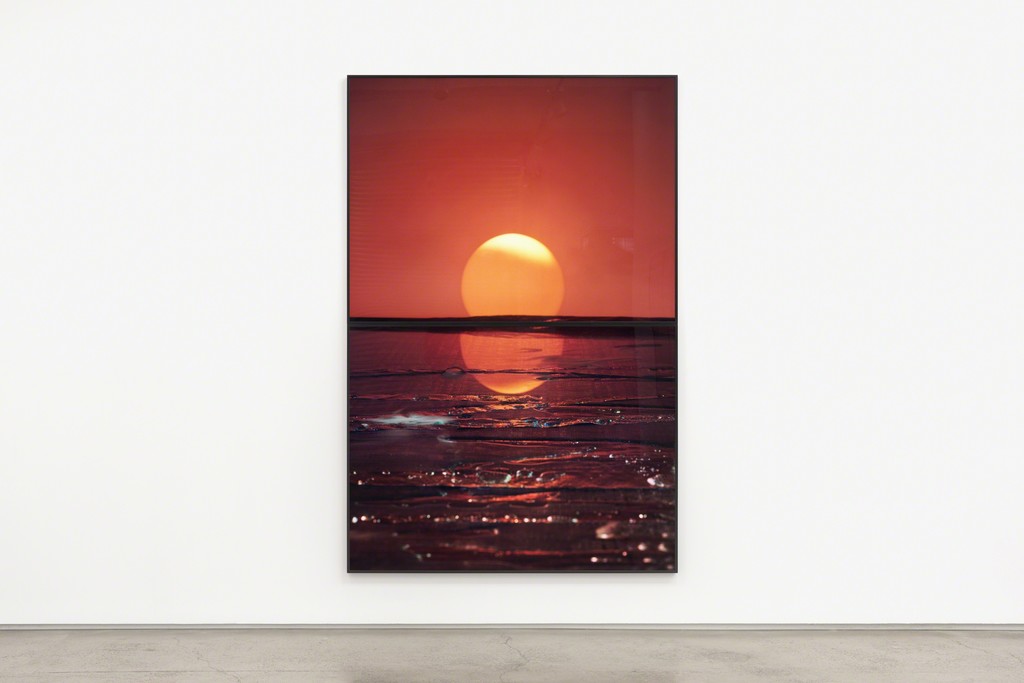 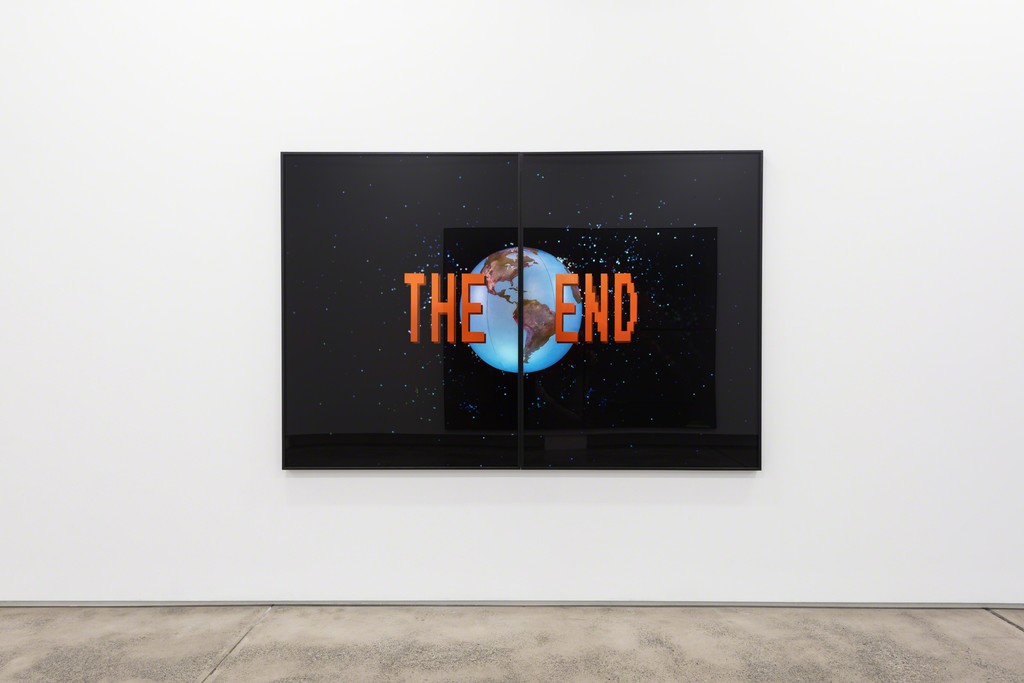 In Out of Life, Darren Sylvester continues his interest in taking lost pop culture moments and turning them into off-beat narratives that mix authenticity, desirability and death. In 2016 the exhibition Broken Model focused on strange similarities between a Jean Paul Gaultier runway show and Tom Hanks in Castaway. Last year his McDonalds-modernist therapy couches helped focus a series of work about his relationship with 90’s America. In this exhibition it focuses on Hollywood, magic, mortality and Microsoft to form a combination of signifiers both obvious and hidden, creating direct universal stories that are inherent with complexity.

Last year Sylvester purchased an 70’s style, science fiction space suit from a Hollywood auction house. While all other costumes were attributed to a specific film or TV show, this lone costume of no provenance was rendered worthless. It’s only clue was the name ‘Stacey’ written inside on a tag – was Stacey a character from a TV program or an actors name? Purchasing the outfit, Sylvester returns the character to life some forty years later with appearances in two large-format film photographs. An actor able to fit the small costume becomes Stacey, trapped forever in character inside a B-Grade film set at over two-metres tall while in Out of Life, now bored and melancholy, Stacey waits for scenes to be called or battles to begin, for love to arrive or somehow go home. Left all alone in this universe, Stacey holds a feeling relatable to everyone – being all out of life.

This central character then inspires the exhibition. The End is a double paneled photograph that mimics end-title cards of Universal Pictures films. The Earth becomes a custom-made balloon produced by Sylvester with ‘The End’ style of font taken from the end screen of 80’s arcade game ‘Missile Command’ that had replaced the ubiquitous ‘Game Over’ to provide a sense of finality and no home to return.

As means of mystic communication to the past, sits two large mirror steel Ouija boards on red coloured sand. The Ouija board is perhaps best known as a Parker Bros board game or horror film trope for characters need to conjure spirits or question their fate. Here, their silvery mirror finish looks to contain power through material make-up. Upon reflecting on the distance of space and time Sylvester designed each board with Stacey in mind. Dingbat Ouija, is made entirely using the pre-emoji graphics of selected Dingbat fonts introduced by Microsoft contained in all versions of Windows, making it one of the most universal languages on Earth. The second, Lucky Charms Ouija uses the staple of American breakfast cereal, ‘Lucky Charms’ as its design. A sugar cereal containing a number of marshmallow ‘charms’ that bring good luck to your day include half-moons, shooting stars, four leaf clovers, horseshoes and diamonds. The exhibition is rounded into contemporary day with IKEA Sunrise, picturing a studio-built ocean illuminated by dry ice and an IKEA ‘Fado’ lamp, suggesting that all new beginnings can be bought with consumption.

Sylvesters multidisciplinary practice involves these wide range of pop culture elements and narratives, where pieces are given a high-end production sheen or twist that transforms them into broader discussions on brand recognition, self-worth, contemporary ennui, pathos and mortality. His installations then present these works in a style reminiscent of a luxury brand store or fashion runway that links back to a consumerist presentation designed to make us forget all our problems and fate.