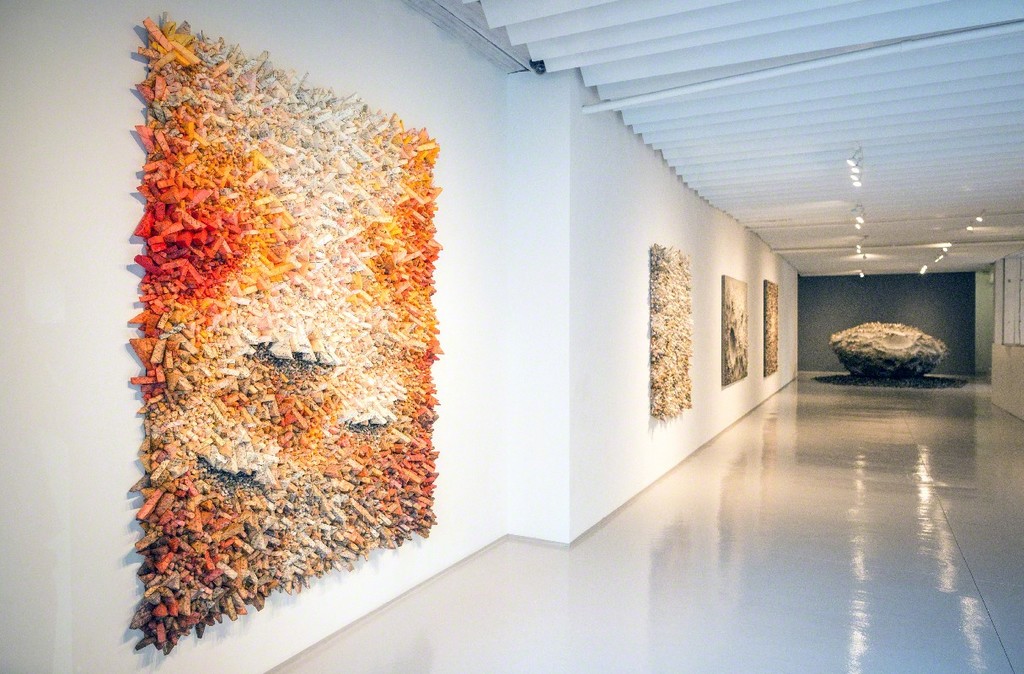 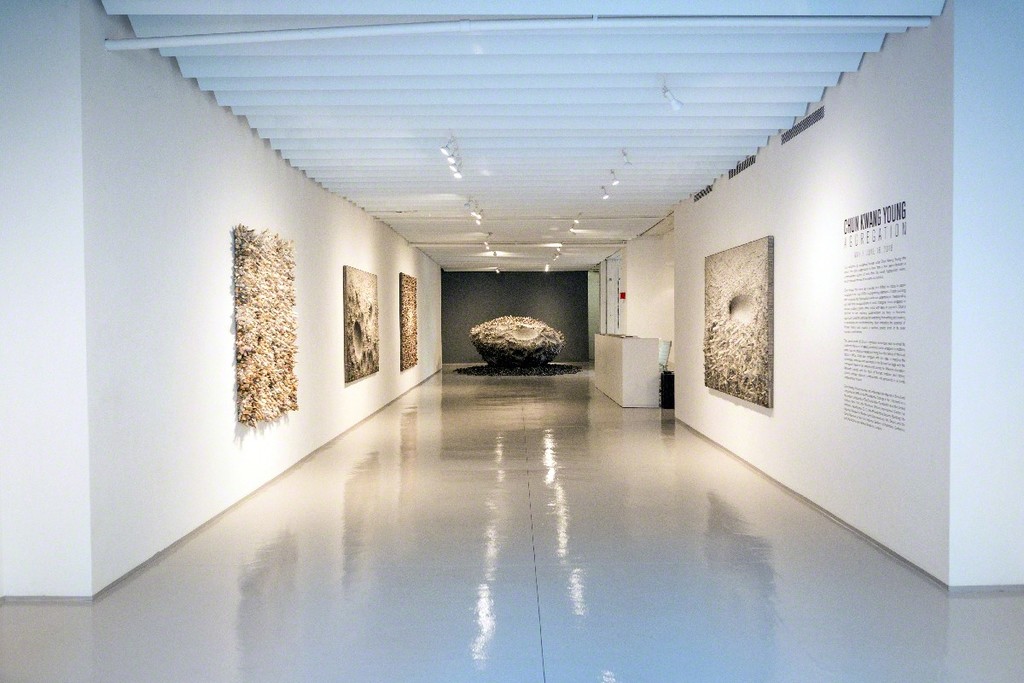 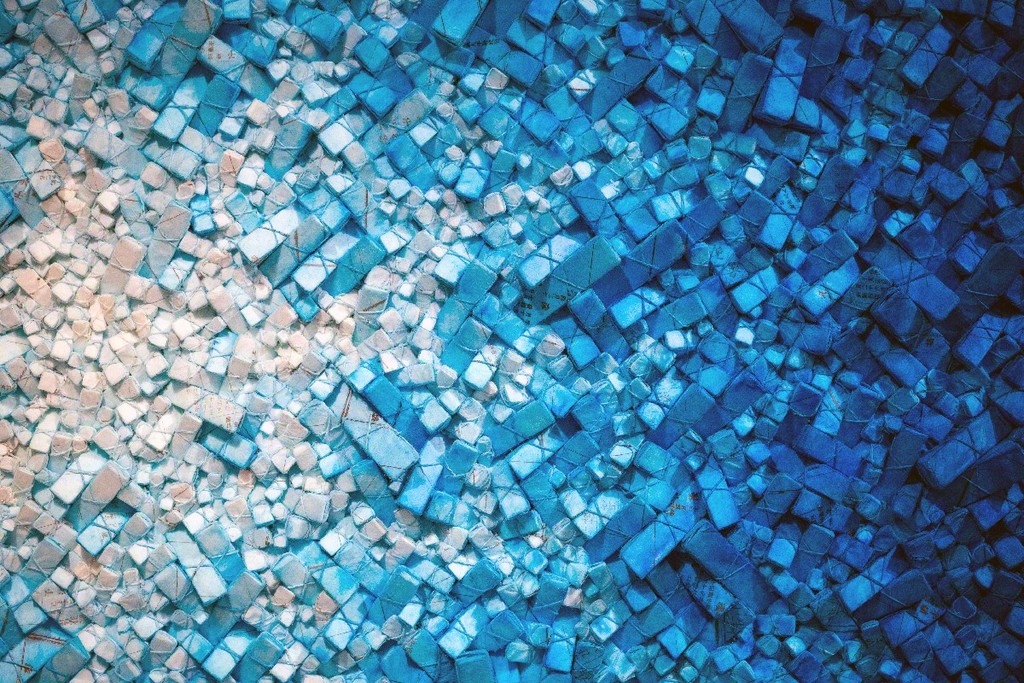 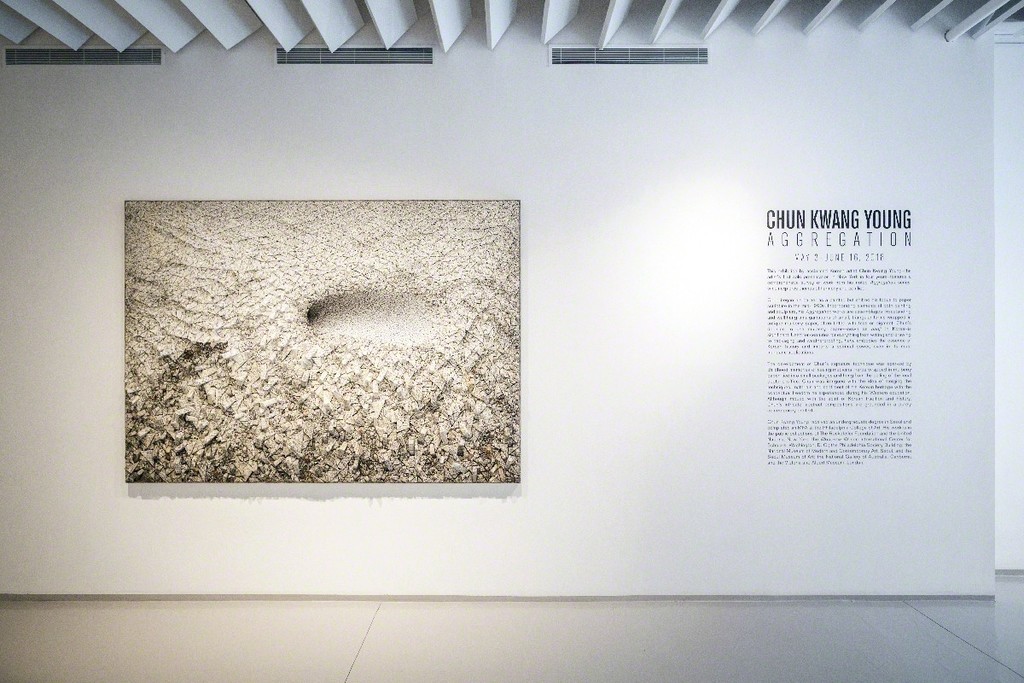 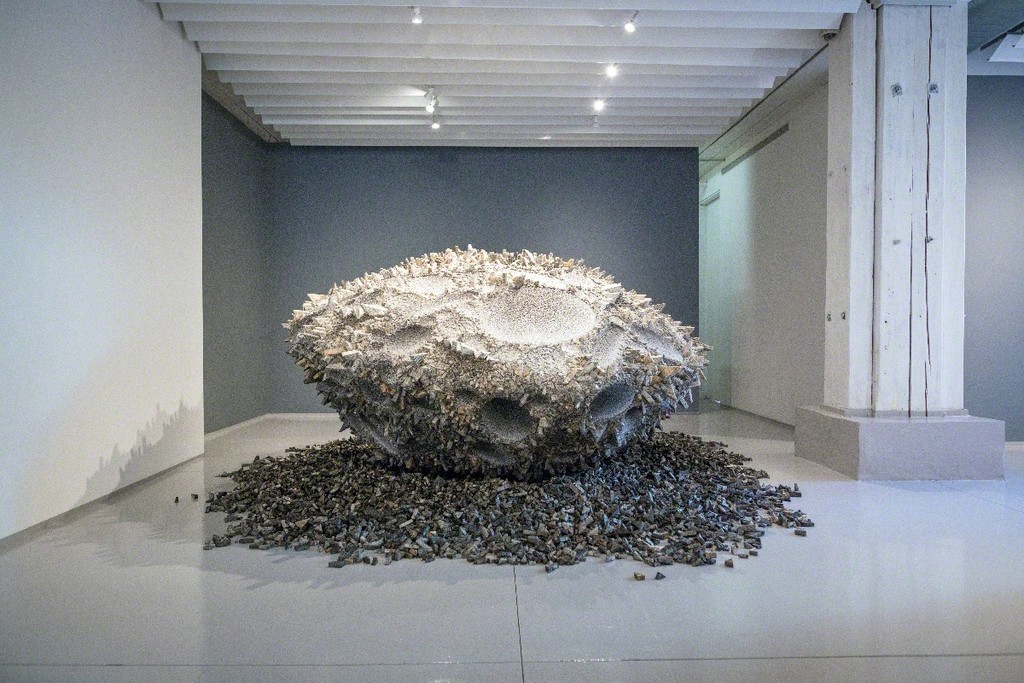 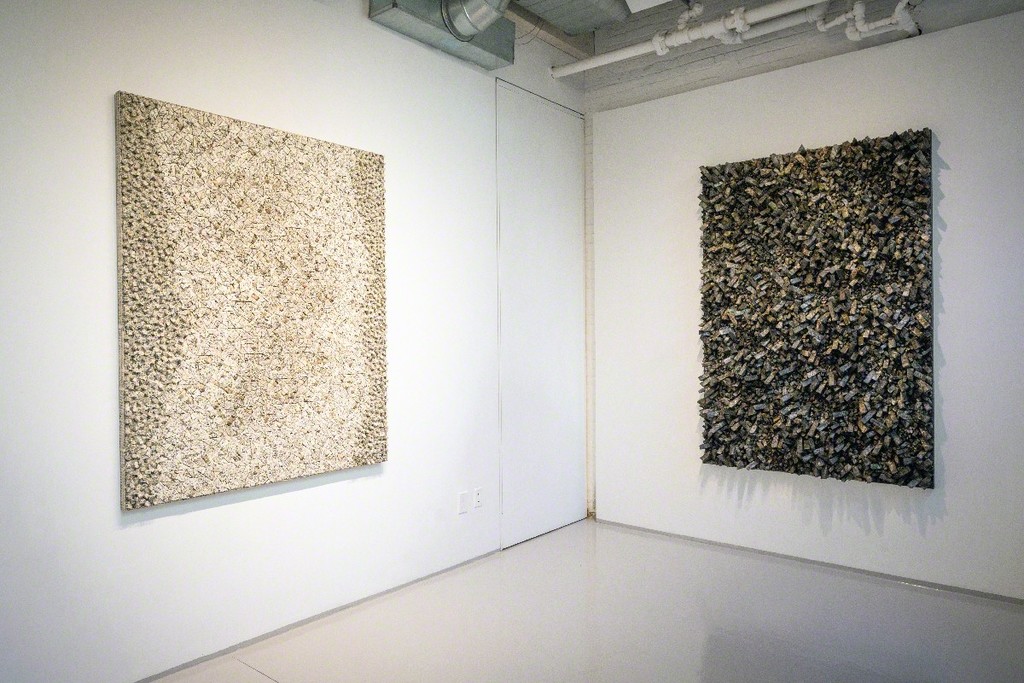 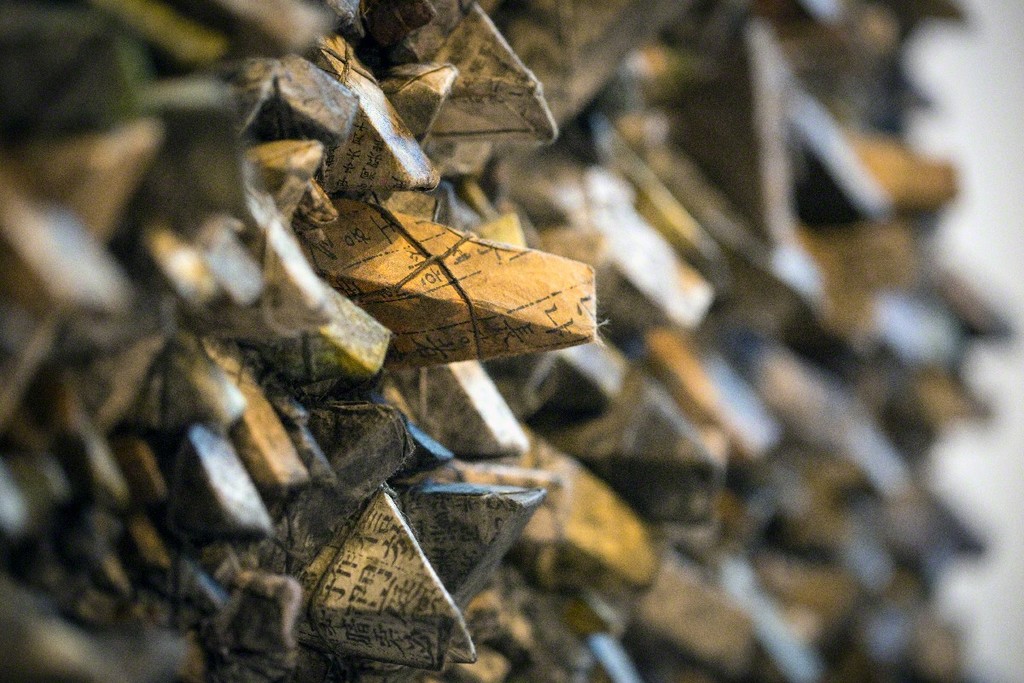 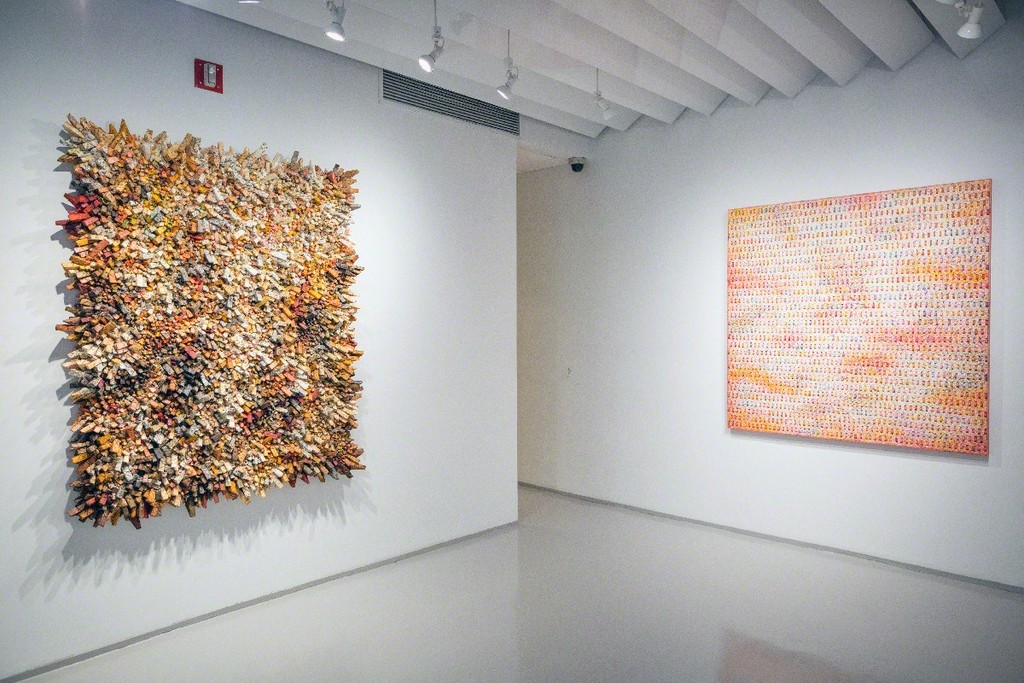 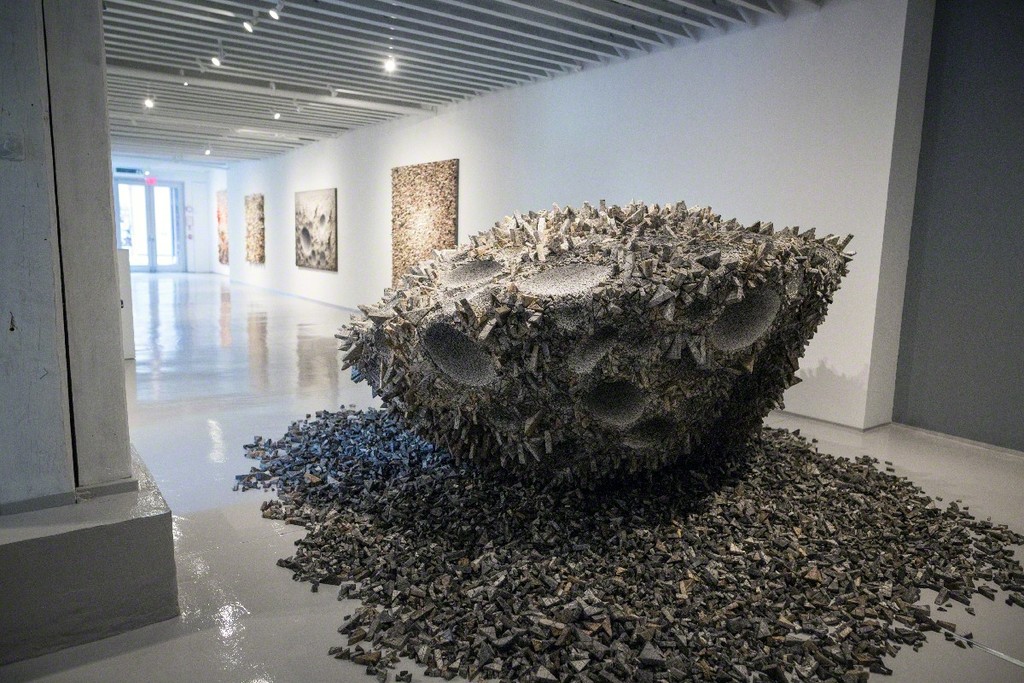 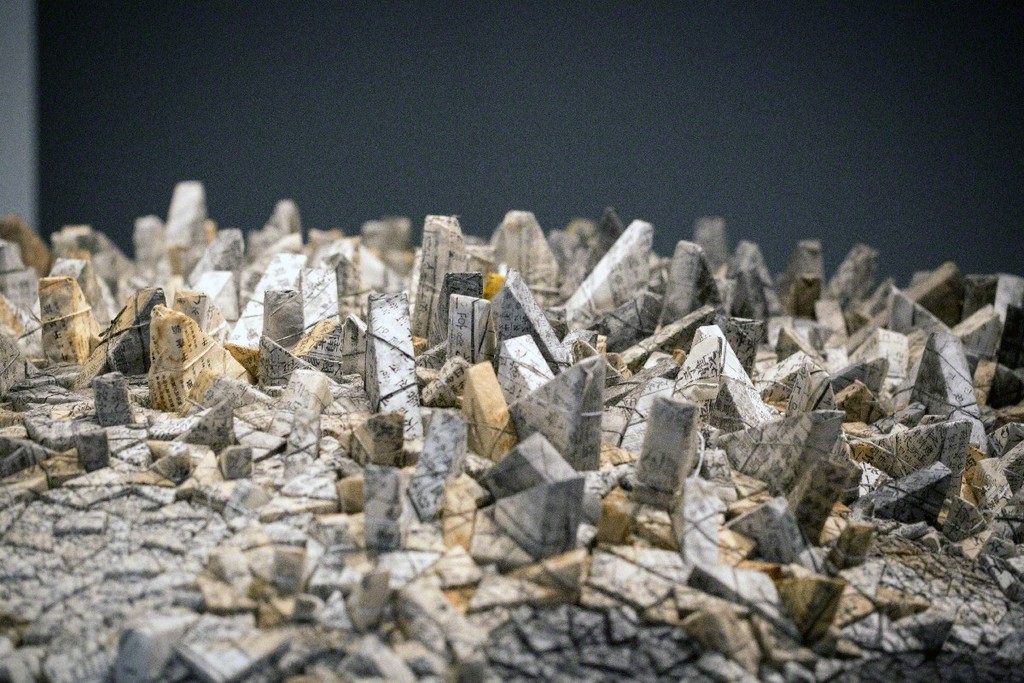 Sundaram Tagore Gallery is pleased to present a solo exhibition by acclaimed Korean artist Chun Kwang Young. The show—the artist’s first in New York in four years—features a comprehensive survey of work from his noted Aggregation series,which explores themes of harmony and conflict.

Chun Kwang Young began his career as a painter, but shifted his focus to paper sculpture in the mid-1990s. Incorporating elements of both painting and sculpture, Chun’s Aggregations are assemblages: freestanding and wall-hung amalgamations of small, triangular forms wrapped in antique mulberry paper, often tinted with teas or pigment.Born in Hongchun, South Korea, in 1944, Chun grew up during the end of Japanese colonization and the brutality of the Korean War. In the early 1970s, he moved to the United States to pursue a Master’s Degree at Philadelphia College of Art, where he was deeply drawn to Abstract Expressionism. “It seemed to be the best way to freely express my surprise and sadness at witnessing the huge gap between idea and reality,” he says.Over time, Chun became disillusioned with the materialistic drive that seemed to fuel the American dreamand feelings of loneliness intensified his longing for home. During this period, Chun’s paintings, whichexplored the effects of light and color, reflected his interest in Abstract Expressionism, however, heultimatelyfound the expression inauthentic. Chun decided to return to Korea and focus on developing hisown methodology, one that was wholly unique and reflective of his history and cultural identity.The development of Chun’s signature technique was sparked by childhood memories of seeing medicinal herbs wrapped in mulberry paper, tied into small packages and hung from the ceiling of the local doctor’s office. He became intrigued with the idea of merging the techniques, materials and sentiment of his Korean heritage with the conceptual freedom he experienced during his Western education. Chun’s decision to use mulberry paper—known as hanji in Korea—is significant. It embodies the essence of Korean history and imparts a spiritual power, even in its most mundane applications. Derived from native trees and prized for its strength and ability to resist water, hanji has been used in Korea for centuries for everything from writing and drawing to packaging and weatherproofing.
With history in mind, Chun sources paper from antique books printed. “The hanji that I am currently usingare from books between fifty and a hundred years old,” he says. “Each has its history and each generationof our ancestors’ joys and sorrows can be seen in the thousands of aggregated fingerprints that make mywork even more mystical and precious. It’s almost as if these fingerprints are trying to have conversationwith me, to explain their reasons for being there.”To create his compositions, Chun starts with the triangular forms, which are individually cut from polystyrene,wrapped in hanji and tied with string made from the same material. He then adheres each wrapped piece to a flat support or sculptural substructure. Once adhered, some of the forms are painted by hand. The process, multifaceted and repetitive in nature, necessitates an almost meditative approach. Chun’s arrangements vary from seemingly uniform surfaces to works that burst from their frames, constituting low reliefs. His palette ranges from subtle, sepia-toned hues, which naturally result from the teas he uses to tint the paper, to pigments in vibrant blue, red, orange and yellow. Some of the works employ subtle shifts in tone and color to create the illusion of craters, dips and depressions. Rendered in a restrained palette of natural hues, the overall effect is organic, geological—almost cosmic in appearance. Over the years, Chun’s Aggregations have become more colorful and evolved in complexity and scale, but the use of mulberry paper remains at the core of his practice. Although imbued with the spirit of Korean tradition and history, Chun’s work, with its intricate, abstract compositions, is grounded in a purely contemporary context. A printed catalogue with an essay by Dr. Marius Kwint, reader in Visual Culture, School of Art and Design, University of Portsmouth, U.K., accompanies the exhibition.

ABOUT THE ARTIST
Chun Kwang Young received a Bachelor of Fine Arts Degree from Hongik University, Seoul, and a Master of Fine Arts from the Philadelphia College of Art, Pennsylvania. His work is in numerous public collections, including The Rockefeller Foundation and the United Nations, New York; the Woodrow Wilson International Center for Scholars, Washington, D. C.; the Philadelphia Society Building, Pennsylvania; the National Museum of Modern and Contemporary Art, Seoul, and the Seoul Museum of Art; the National Gallery of Australia, Canberra; the Victoria and Albert Museum, London; and the National Museum of Fine Arts, Malta.He was named Artist of the Year by the National Museum of Modern and Contemporary Art, Seoul, in 2001 and in 2009 he was awarded the Presidential Prize in the 41st Korean Culture and Art Prize by the Ministry of Culture, Sports and Tourism.

ABOUT SUNDARAM TAGORE GALLERY
Established in New York City in 2000, Sundaram Tagore Gallery is devoted to examining the exchange of ideas between Western and non-Western cultures. With spaces in New York City (Chelsea and Madison Avenue), Singapore and Hong Kong, we focus on mounting exhibitions and hosting not-for-profit events that encourage spiritual, social and aesthetic dialogues. With alliances across the globe, our interest in cross-cultural exchange extends beyond the visual arts into many other disciplines, including poetry, literature, performance art, film and music.