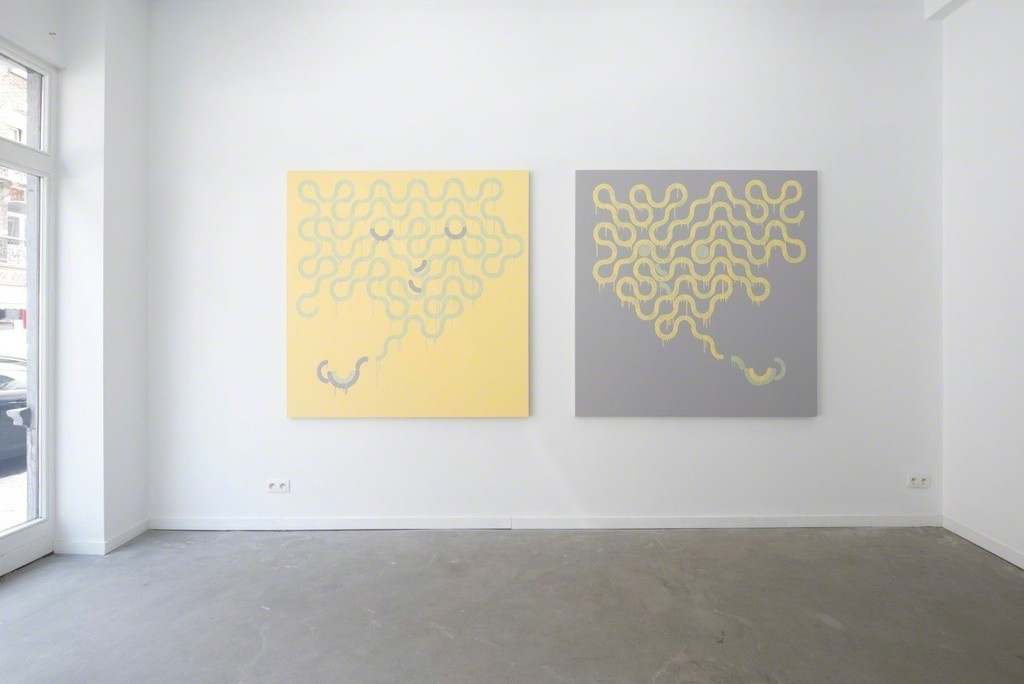 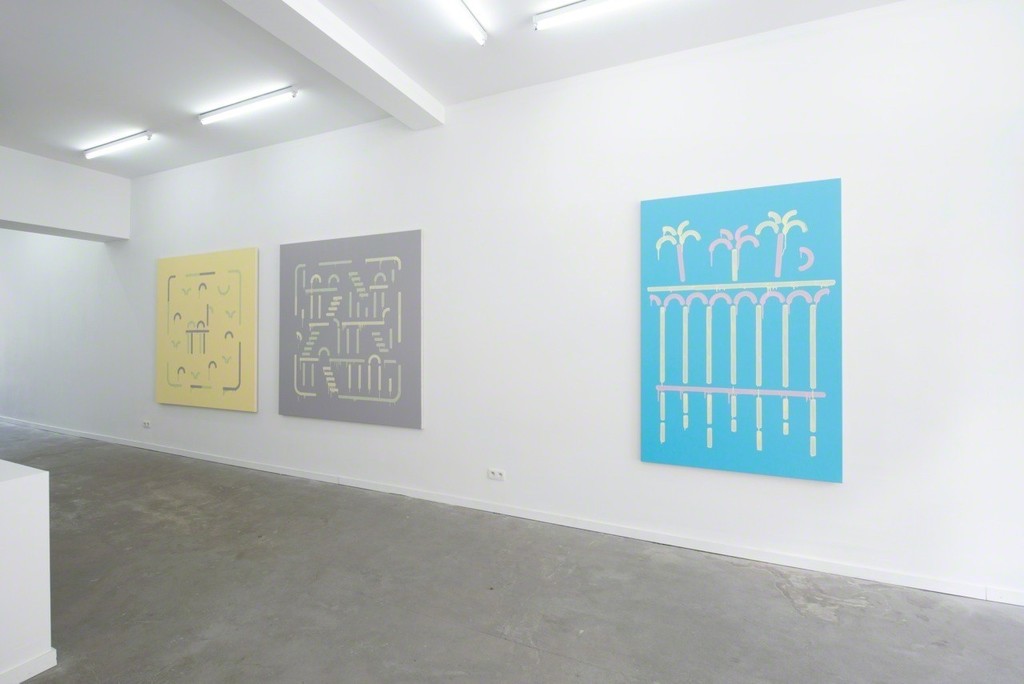 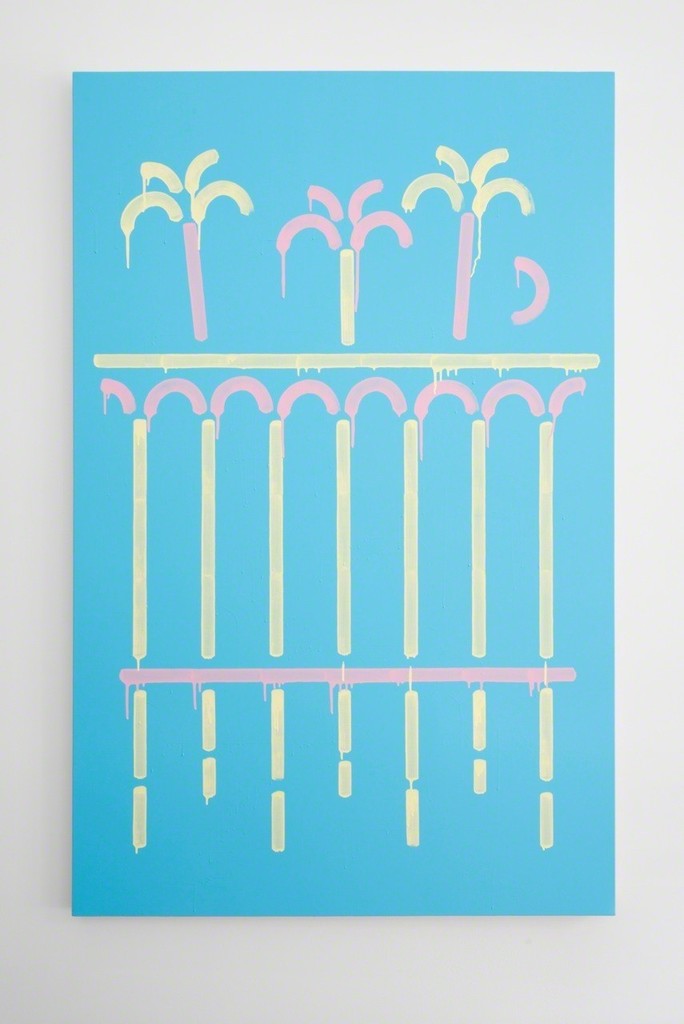 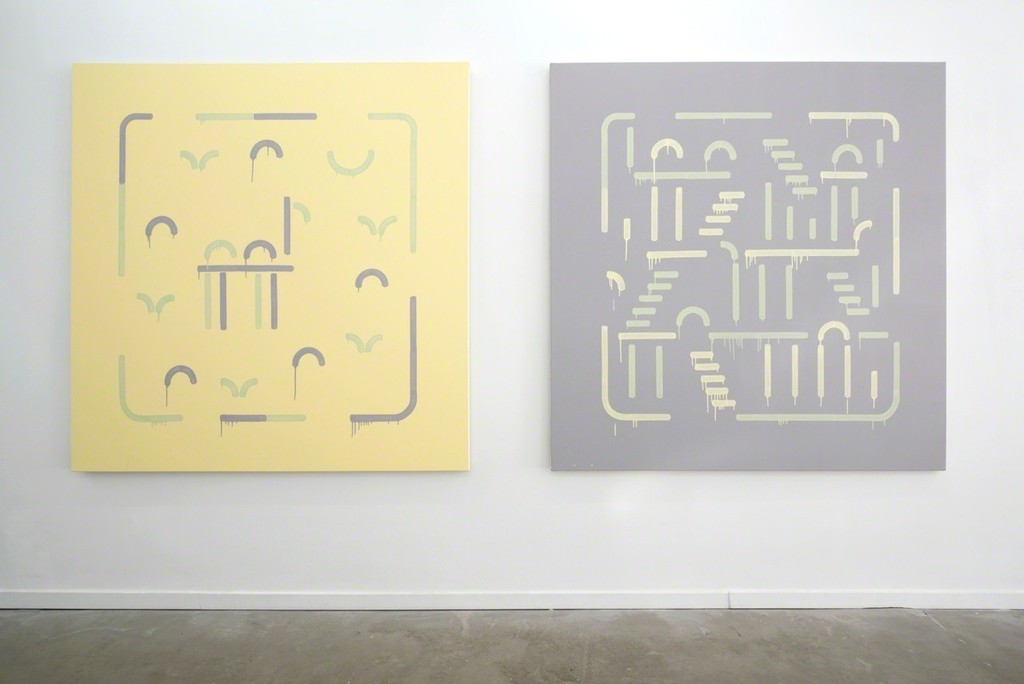 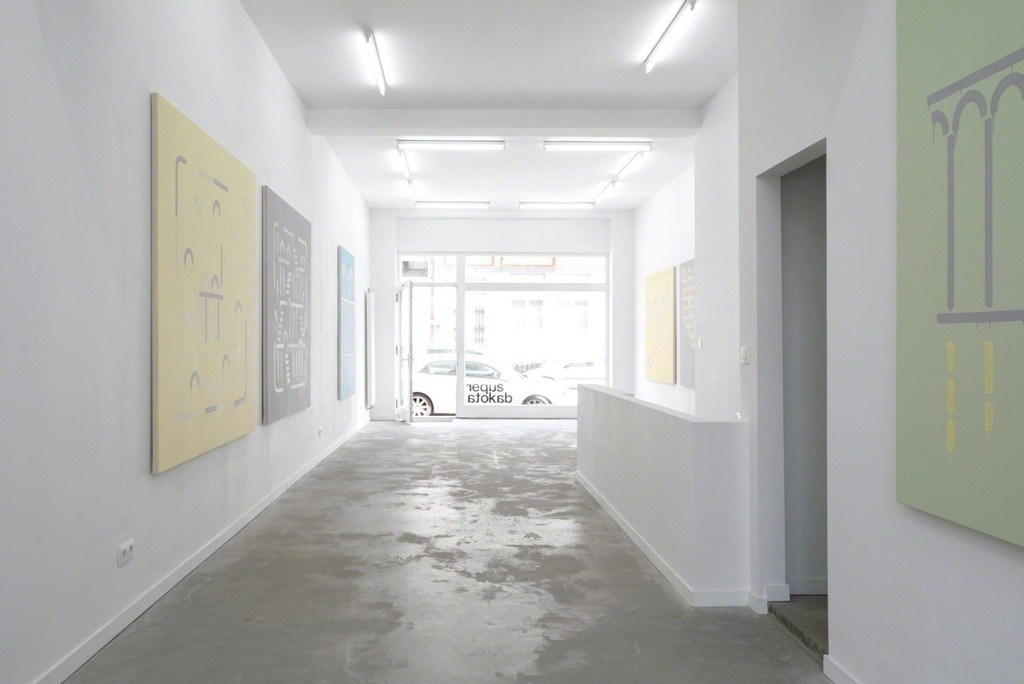 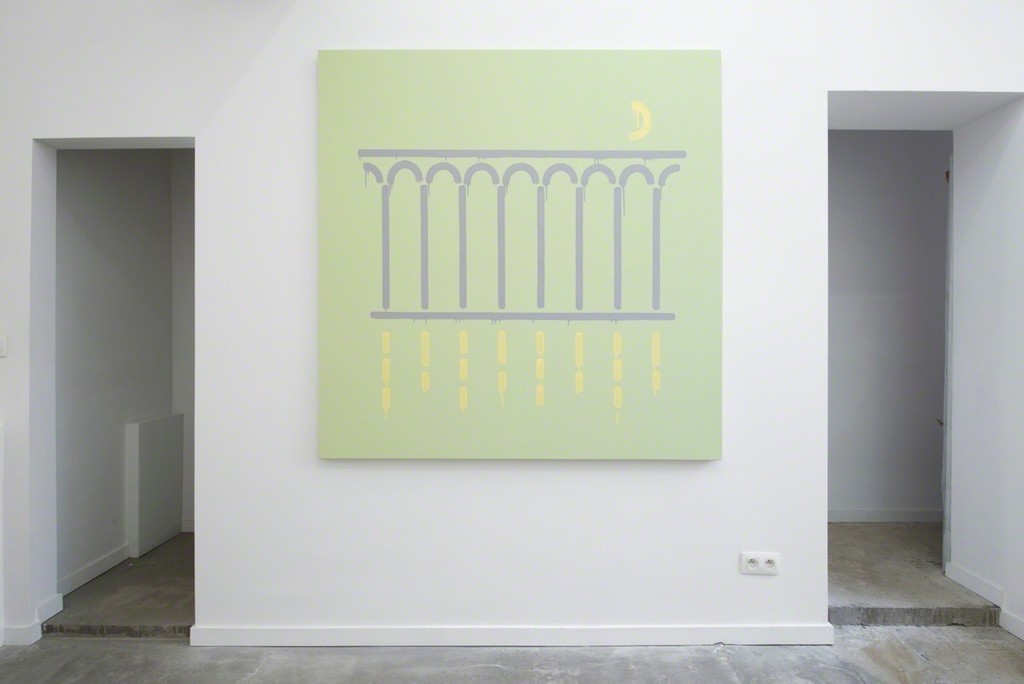 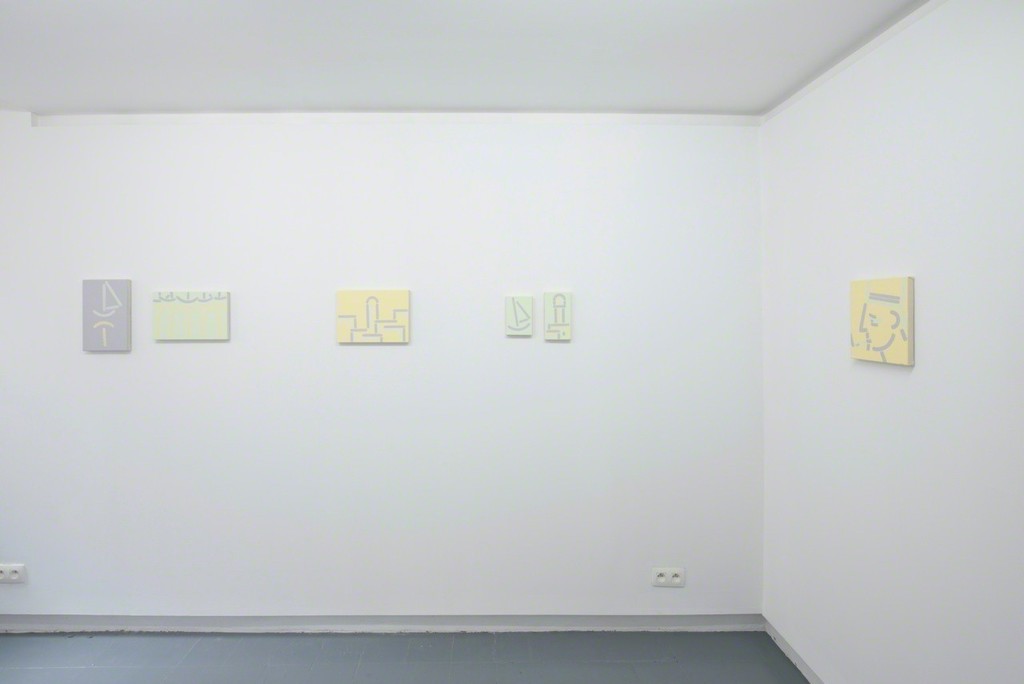 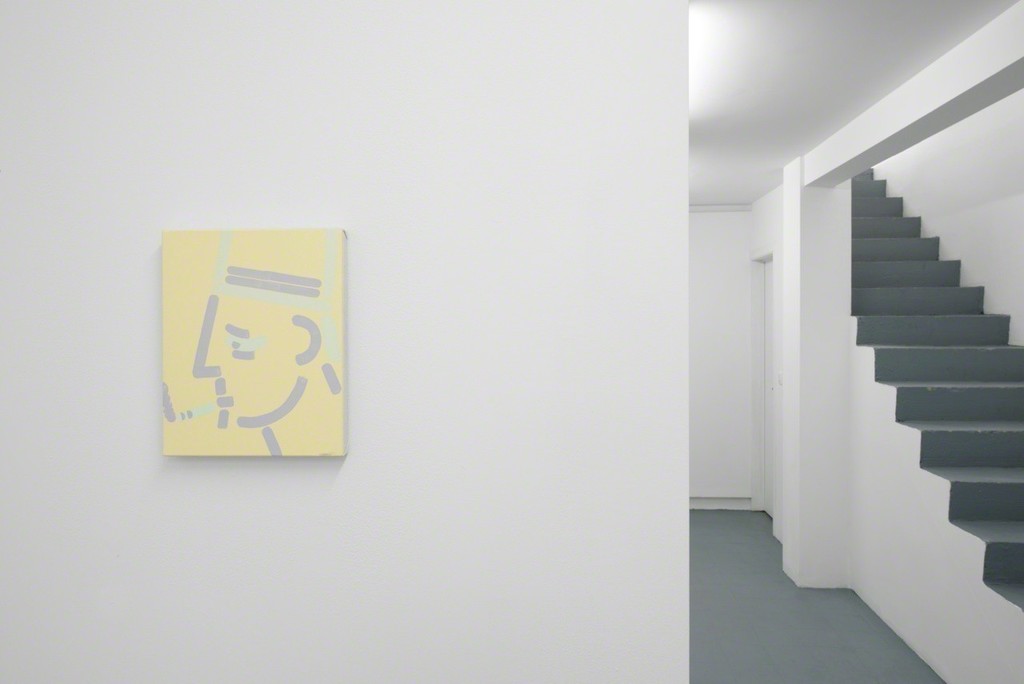 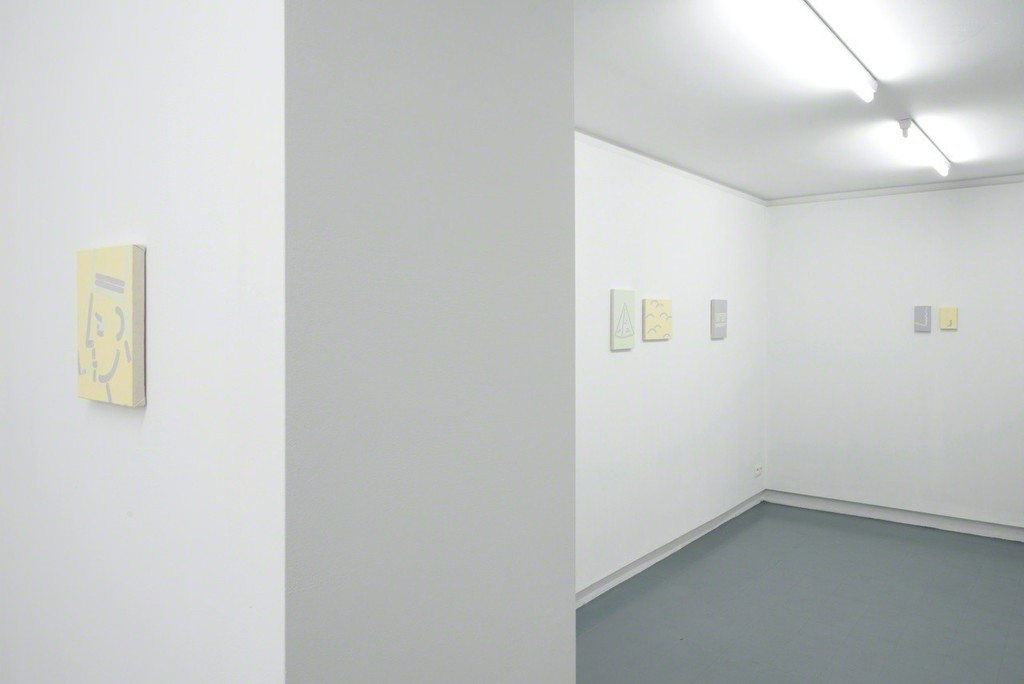 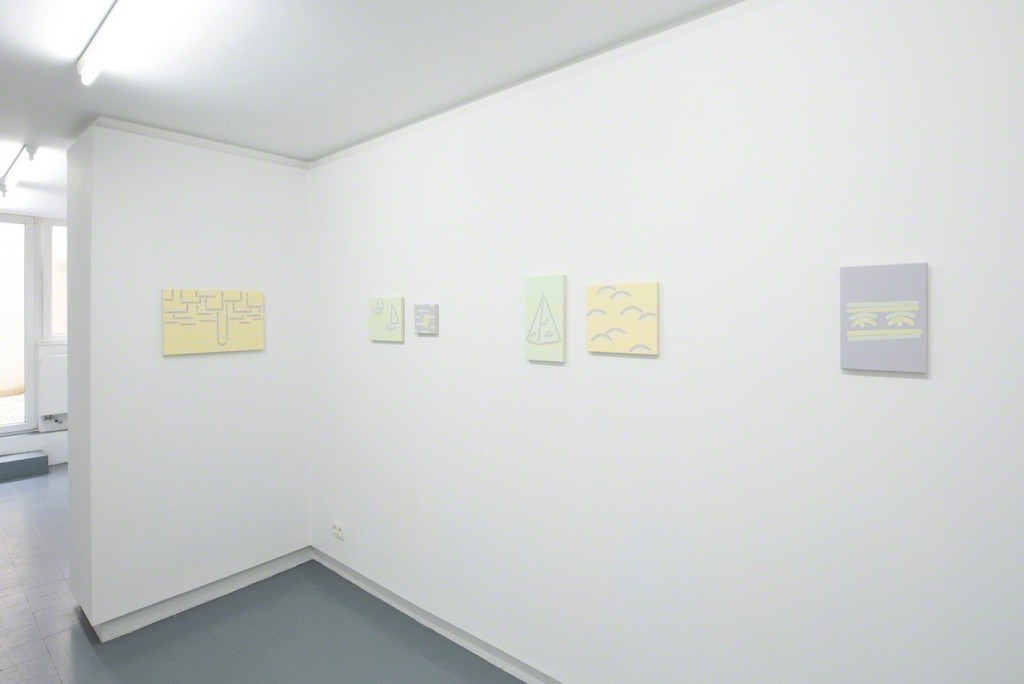 “The series of paintings I am showing in Mirages were made during the second half of 2015. There is a series of large formats on the ground oor, and a series of smaller (to very small) formats downstairs. In terms of chronology, the series starts with the two biggest paintings, Palace and Desert. In these two paintings the abstract elements speci c to the previous paintings (vertical and horizontal lines, semicircles and quadrants) are assembled to form gurative “items” (columns, bows, stairs, stones, grass, camel, etc). There is an aspect of triviality to these works, which are reminiscent of some primitive video games, construction games, and hieroglyphic vocabulary. These two paintings are framed by a “cartouche” which give them a bas-relief feel, as if they’d been removed from a building, their association seems to try and tell a story.

I have used this narrative element to move toward some kind of fake orientalism, each painting presents itself as part of a décor (the well-known “backdrop” of a story) from which one could infer a storyline but which is only a way to underline the speci c story of painting itself (which is always my main focus). In a nutshell, the series tell the story of what happens to the colours and gestures developed in paintings, and the questions I ask myself are always the same: how do we go from one painting to another? What make a painting t within a body of work? What is the value of a painting abstracted from its exhibition context, and vice versa.

At first the figurative aspect of these pieces was an accident. But then, it becomes a choice. I told myself I would follow the imaginary atmosphere invoked by the colours of the rst paintings of the series. When I start a series of paintings, I start by looking for something that works; colours, a way of using the painbrush. Then I try to develop a whole vocabulary, often quite basic, but which holds together. If a camel appears in the vocabulary – tough break. Or should I say lucky break? I don’t mind venturing into unknown territories. I more or less know who I am, where I situate myself as a person and as an artist, so I am not afraid to get lost.

Moreover, especially when it comes to the small formats, this possibility of a storyline or of a fake travelogue has helped me underline this approach of painting that come as a succession, one after the other – following the “images” that emerge from the paintbrush. Of course, the themes I deal with are full of visual recollections, from orientalist painting to that of the moderns who worked in Maghreb, or even simply in the South of France (like the Fauve Artists in Collioure for example). But the figurative subjects are only «mirages», I’m not really interested in depicting them (just like, I guess, a figurative painter is interested in what he is depicting): I just run into them along the way.

Again, the minimalism of the vocabulary is rather similar to that of the first video games, and asks the same question: how, from a very basic language of colours and lines, can one create a whole universe? This kind of questioning also arises in children’s books: for example the eyes of animals or sleeping characters are often stylised as semi-circles. If one must talk of primitivism, then yes, there is a primitivism in those paintings, a primitivism which has this complex identity, a mixture of modern art, video games and children’s books.”