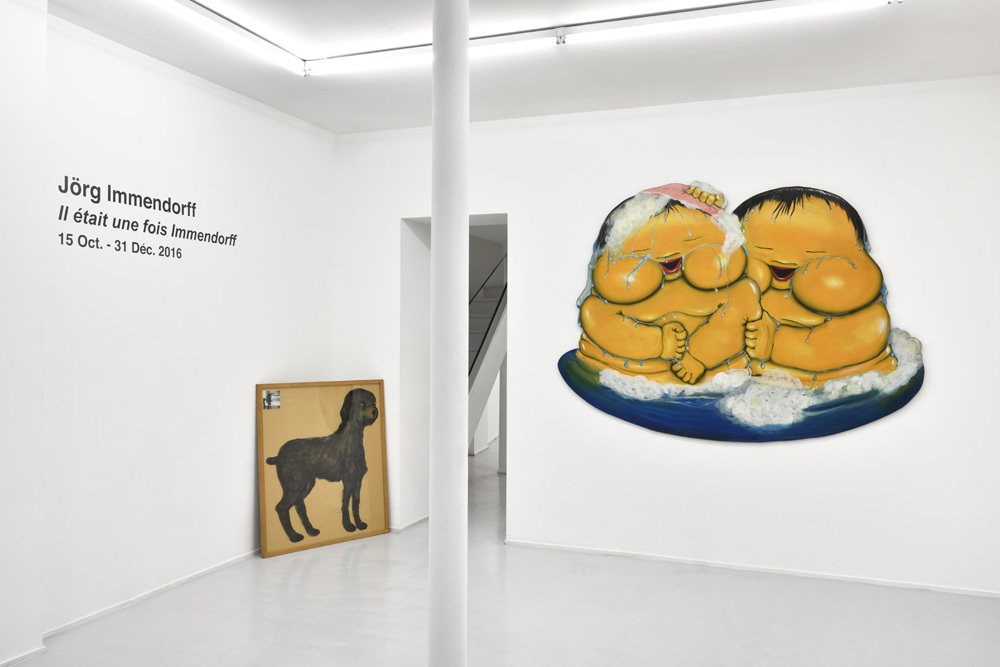 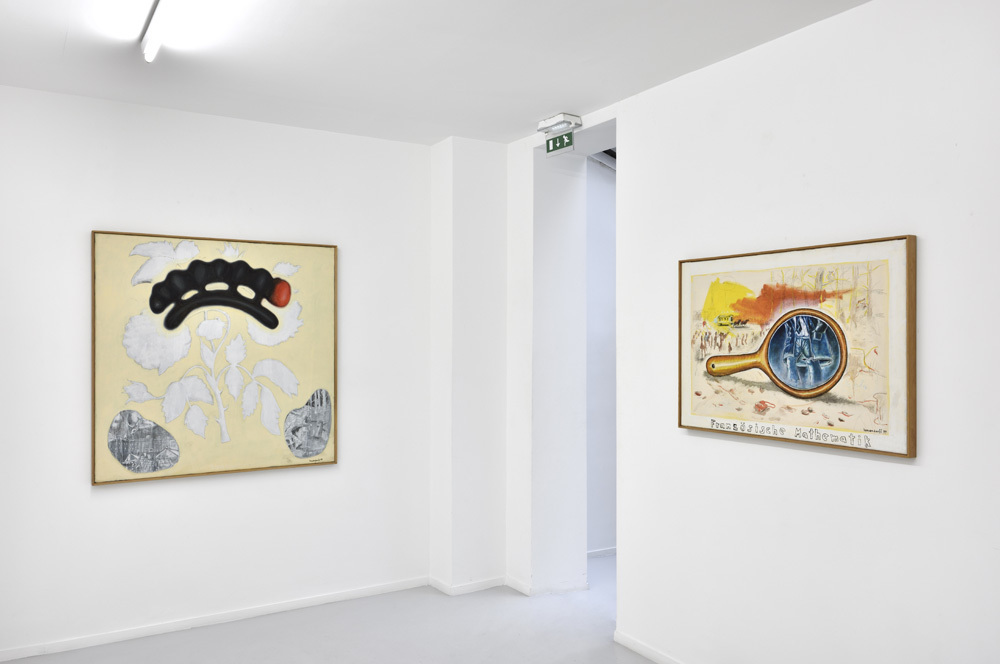 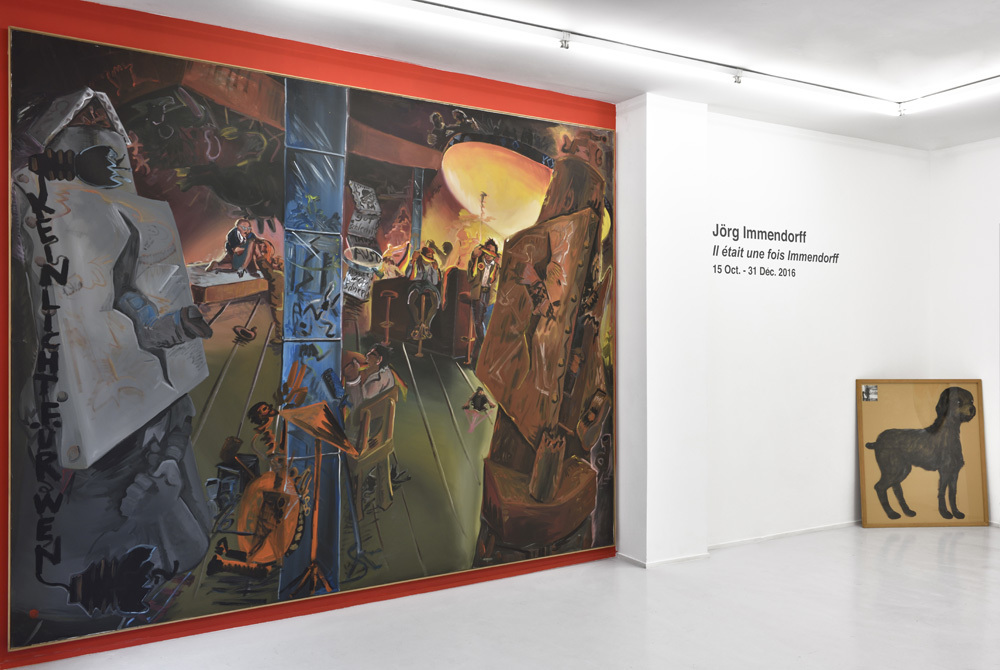 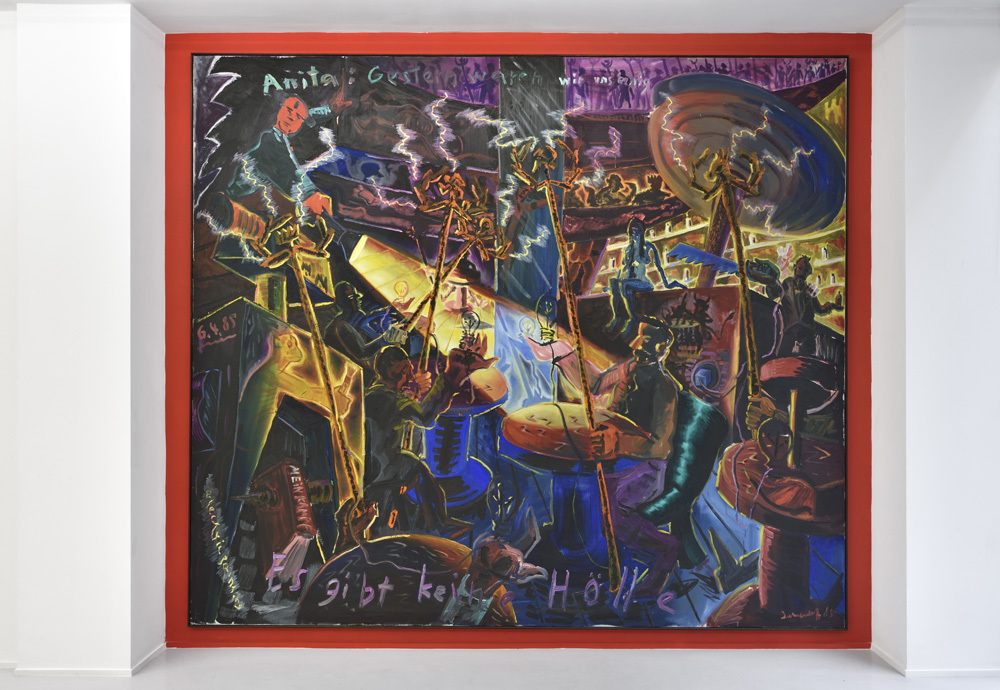 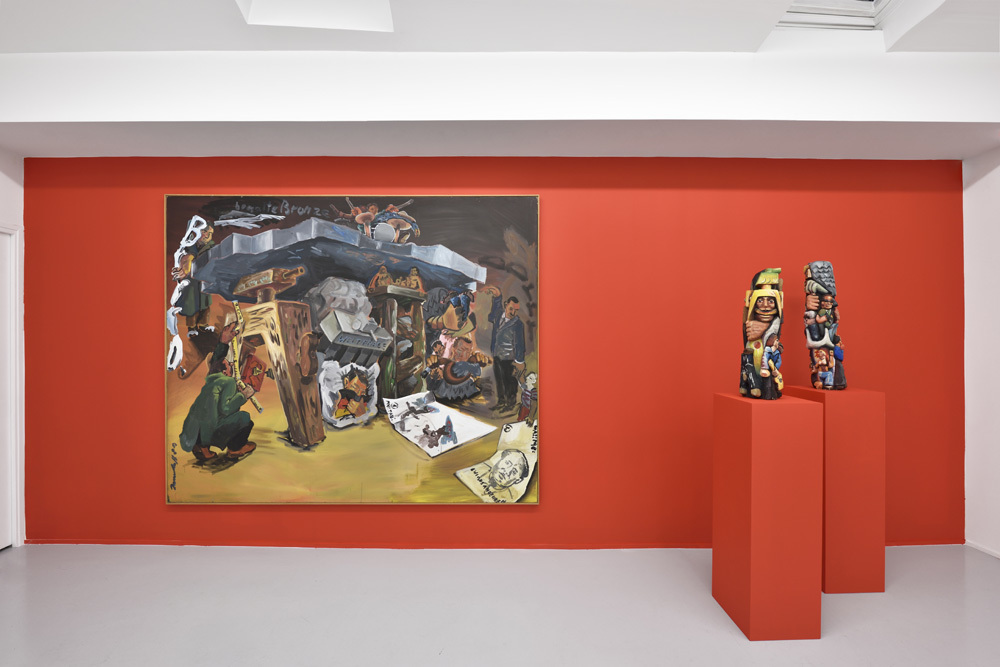 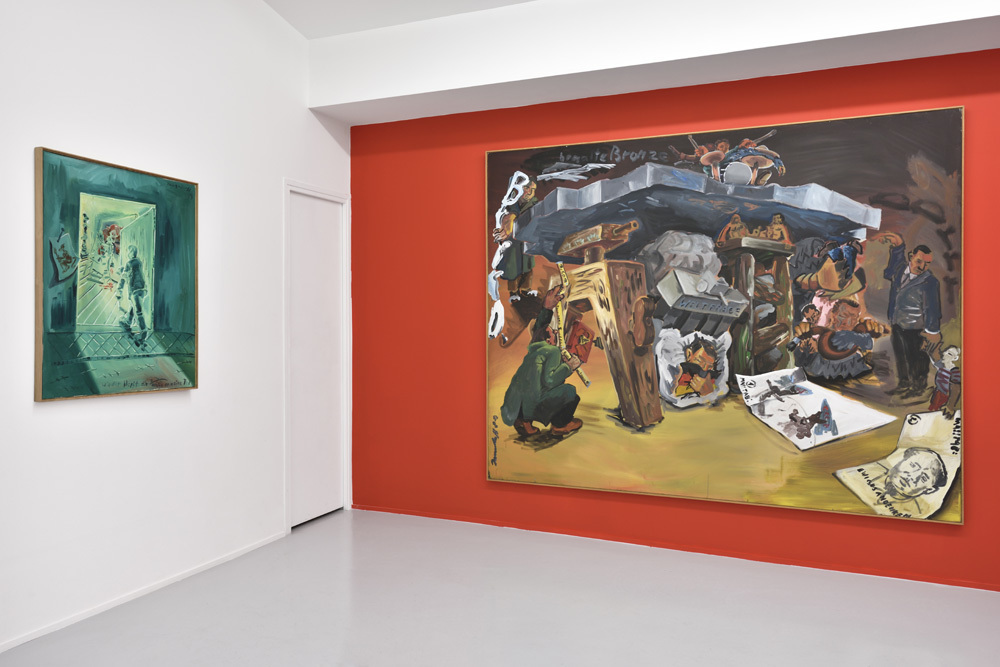 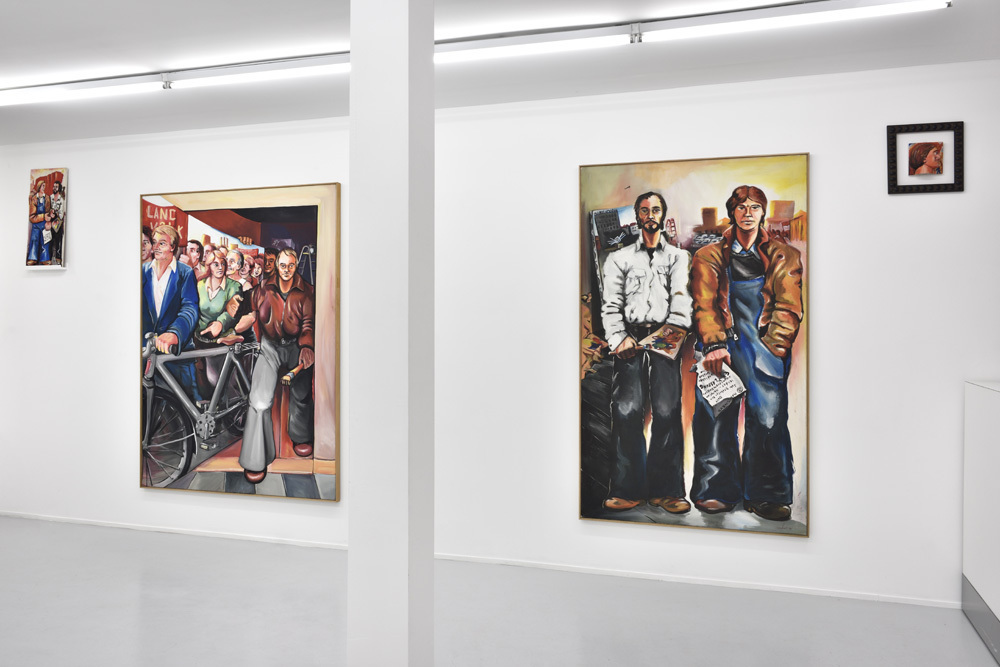 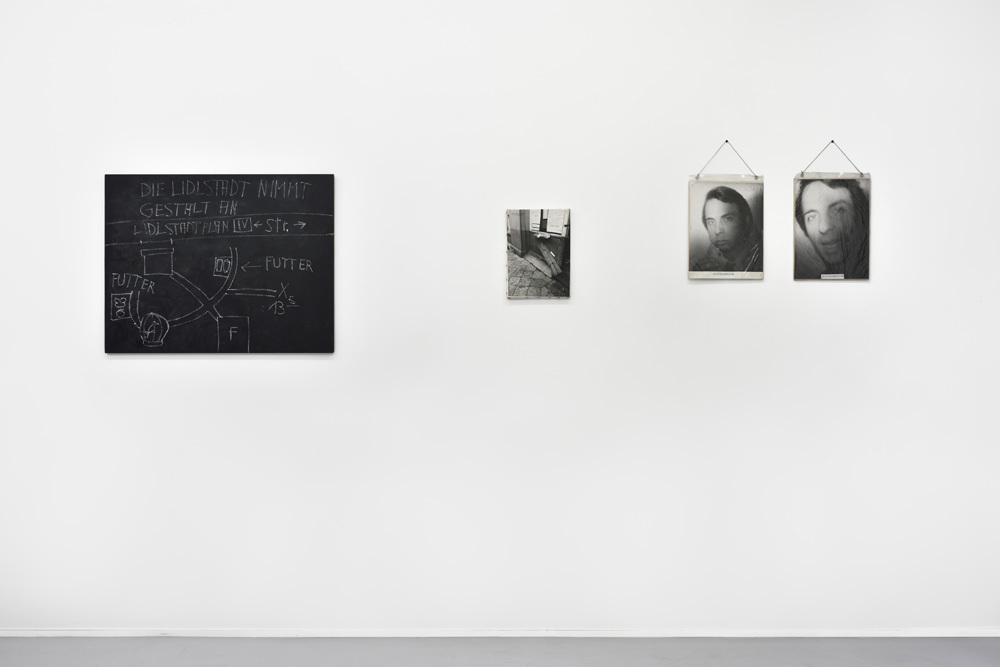 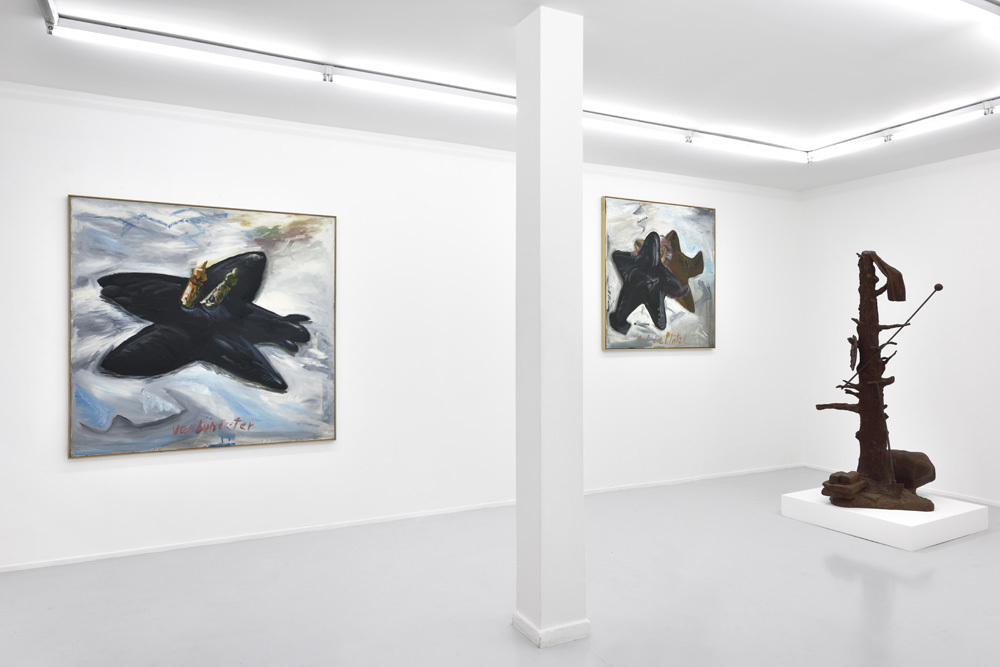 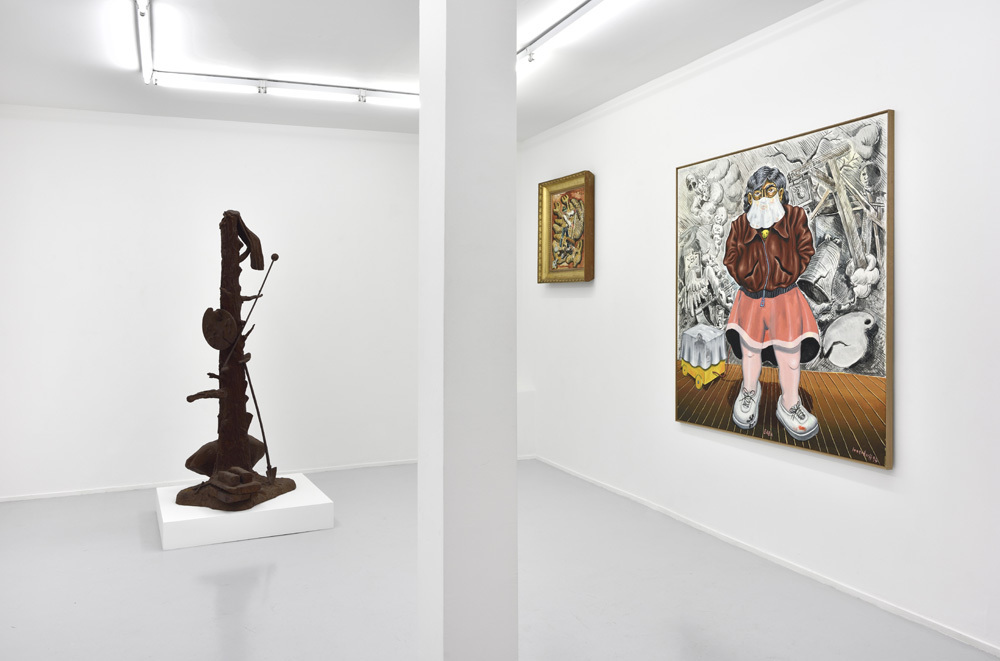 With his incandescent and libertarian body of work, Jörg Immendorff has joined the cenacle of the greatest German neo-expressionist painters: Georg Baselitz, A.R. Penck, Markus Lüpertz, Anselm Kiefer, Sigmar Polke and Gerhard Richter. Unfolding from the shifting sands of the East-West political confrontation whose epicentre will become Berlin at the end of WWII, his work is rooted in a period of art history permeated with aesthetic trends that stigmatize figurative painting, from the 1960s onwards.

From his beginnings in the early 60s at the Kunstakademie Düsseldorf (Düsseldorf Fine Art Academy) to his premature death in 2007, nothing will exhaust Immendorff’s energy and determination to stand against the cultural establishment or the aesthetic diktats.

Immendorff enters the Düsseldorf Kunstakademie in 1963 to study stage design under Teo Otto’s tutelage. After being expelled by his teacher when he refuses to include one of his paintings in a stage set, he joins, the following year, the studio of Joseph Beuys, the anti-painter. Against all odds, he becomes, amongst all the students, his closest accomplice: his sparring-partner. At the Kunstakademie, Immendorff stands out. He is a painter who possesses an unrivalled command of the German language and conducts an extreme leftist political struggle wearing a toga and a cardboard sword … Eventually, his artistic and militant interventions carried out with the posture of a liberated Harlequin, result in his dismissal. History however, is not without a sense of irony. In 1996, having achieved international recognition, Immendorff re-integrates Düsseldorff’s Kunstakademie as a teacher.

From the neo-dadaist group Lidl (in the 60s) to the later works he conceives mentally and then realises with the help of his assistants (from the 90s up to his death), Immendorff never ceases to sculpt, draw and paint. Alongside his peers, he resumes the golden age of German painting, interrupted by the First World War and influenced by the Neue Sachlichkeit (New Objectivity) movement.

His constantly evolving visual language summons story and history, mixing politicians, artists, activists, workers and craftsmen. His figures, portrayed with a radical, figurative and neo-expressionist approach, are seen discussing, drinking and failing within the frameworks of a historical series: Café Deutschland (1977-1984). One of the most emblematic pieces of this series is included in this exhibition.

Social and political issues feature at the heart of Immendorff’s practice. As early as the 70s, he starts an artistic collaboration with A.R Penck. Together they form a bond with artists from the GDR, and depict the story of a country divided or in reconstruction.

During the same period Immendorff becomes preoccupied with environmental issues and draws parallels between the threats facing nature and the ones facing painting. The sculpture Elbquelle II (1999), presented in this exhibition is a forceful illustration of this: a humanized and damaged tree holding a painter’s tools. However, the inspired and critical eye of the artist offers no answer to the viewer. Immendorff’s practice is mainly about revealing the torments and temptations of a modern society, under the influence of power players and the march of history.

Through the 80s, his paintings become more symbolic and allegorical, revisiting the art history of the 20th century and reviving its leading figures: Otto Dix, Max Beckmann Max Ernst... He also pays tribute to the forefathers of contemporary art who turn their back on painting but shape the artist he becomes: Joseph Beuys or Marcel Duchamp. Such figures are included in his series Café de Flore (1987-1992).

In the 90s, stricken by the Charcot’s disease, his paintings develop gradually into constructed mental projections that he sketches out on the computer, before finishing them with the aid of assistants. His works derive inspiration from his own paintings, private pictures, images from magazines or historical works of art by Dürer, Cranach or Goya. Coined as the “Raphaël without hands” by the critic Peter-Klaus Schuster, Immendorff embarks upon a narrative phase where the subjects travel through time and overlap quietly, not only in an evocation of family and death, but also in tribute to art history. In the 90s, Immendorff also returns to set design, and completes the stage set for the 1994 production of Igor Stravinsky’s opera, The Rake’s Progress, presented at the Salzburg Festival.

In 2006, a year before he passes away, Jörg Immendorff, who hit the headlines on account of his libertine affairs, selected 25 of his paintings to illustrate the Bible. In his foreword he explains to the readers his faith in God.

Jörg Immendorf begins his career in the 60s, in Germany, where he is largely exhibited. In 1972, he participates in Documenta V and in the Venice Biennale 4 years later. From then on, his career takes an international turn. His most important exhibitions include : the Kunstmuseum, Basel (1979); the Kunsthalle of Bern (1980); the Van Abbemuseum, Eindoven (1981); the Kunsthalle, Düsseldorf (1983); the Maison de la Culture et de la Communication de Saint-Etienne (1985); the Museum Boijmans Van Beuningen, Rotterdam (1992); the Centre Georges Pompidou, Musée national d’art moderne, Paris (1993); the Centre d’Art Contemporain Meymac (1994); the Museum Rafino Tamayo, Mexico City (1994); the Barbican Art Gallery, London (1995); the Kunst Museum, Bonn (1998); the Neue Nationalgalerie, Berlin (2005); the Fondation Maeght, Vence (2015).
In 1997, Immendorff wins the world’s best-endowed art prize proposed by the Museo de Arte Contemporaneo (MARCO) in Monterey, Mexico. In 1998, he is awarded the Verdienstorden der Bundesrepublik Deutschland, the German equivalent of the Order of the British Empire (OBE).