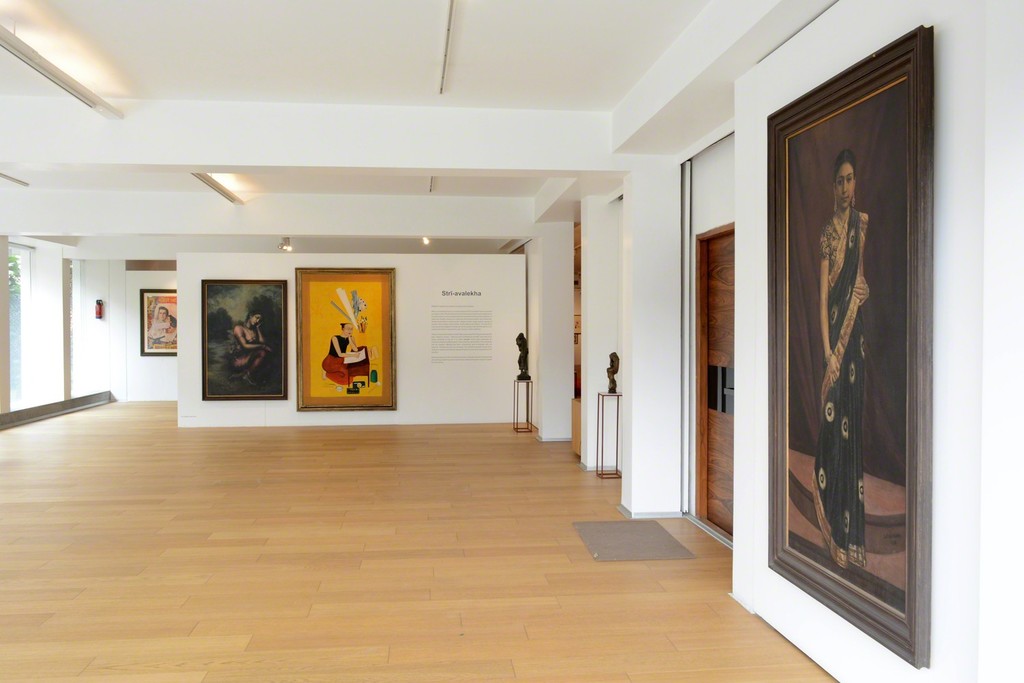 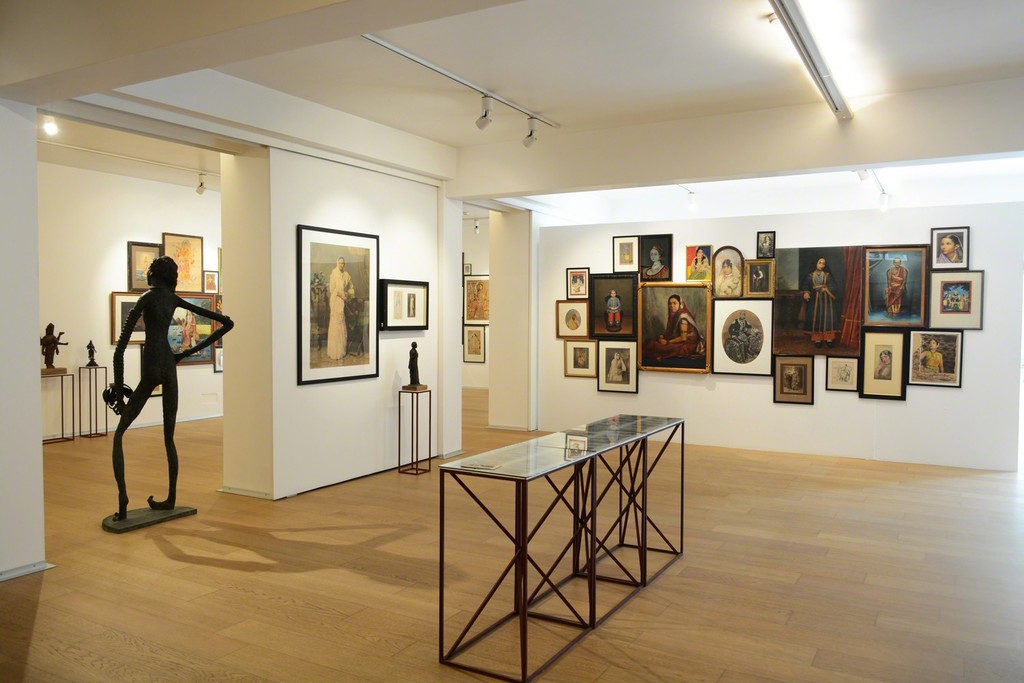 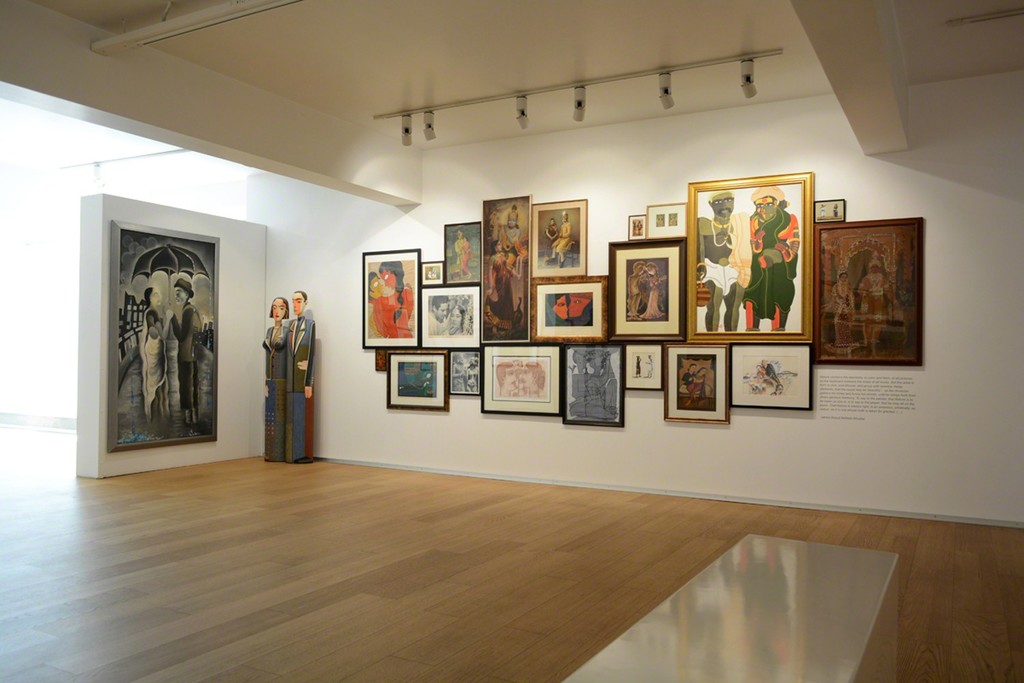 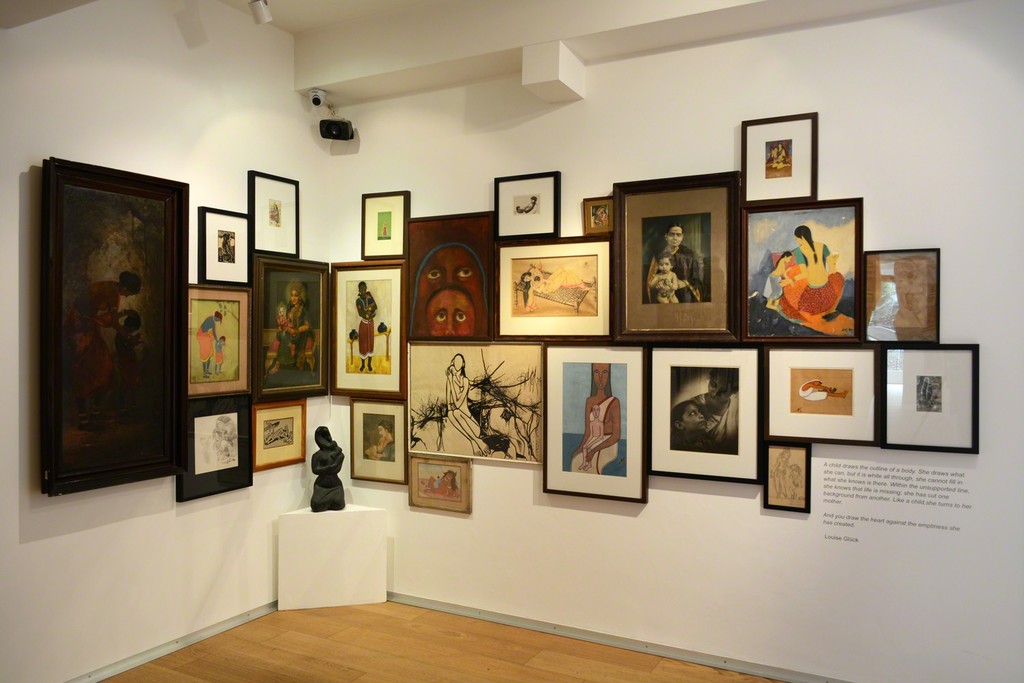 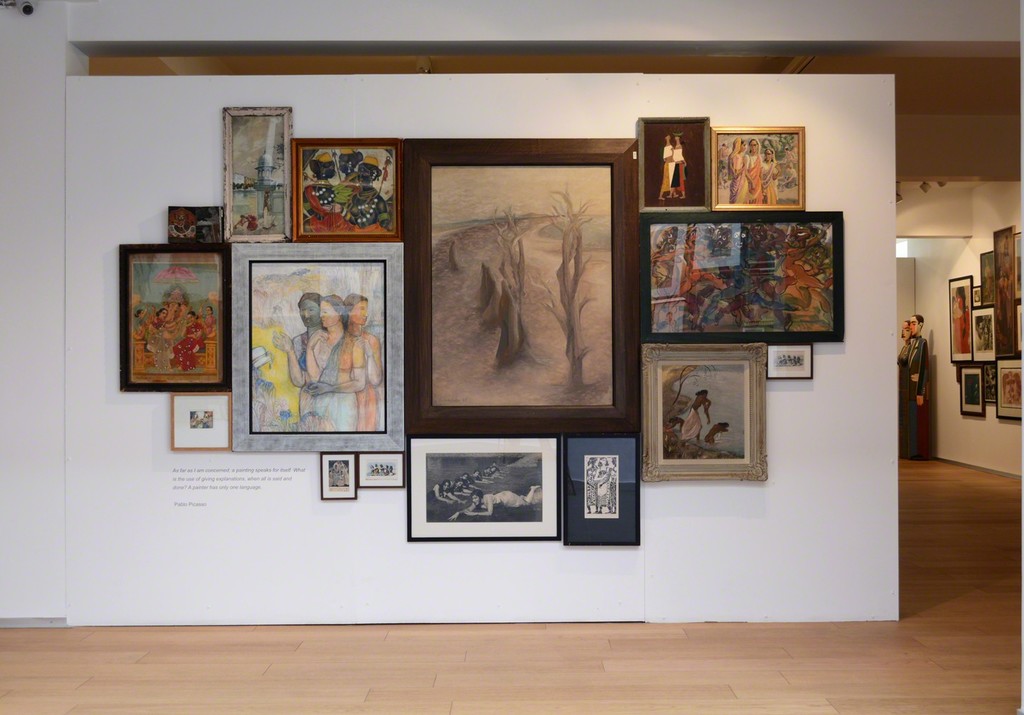 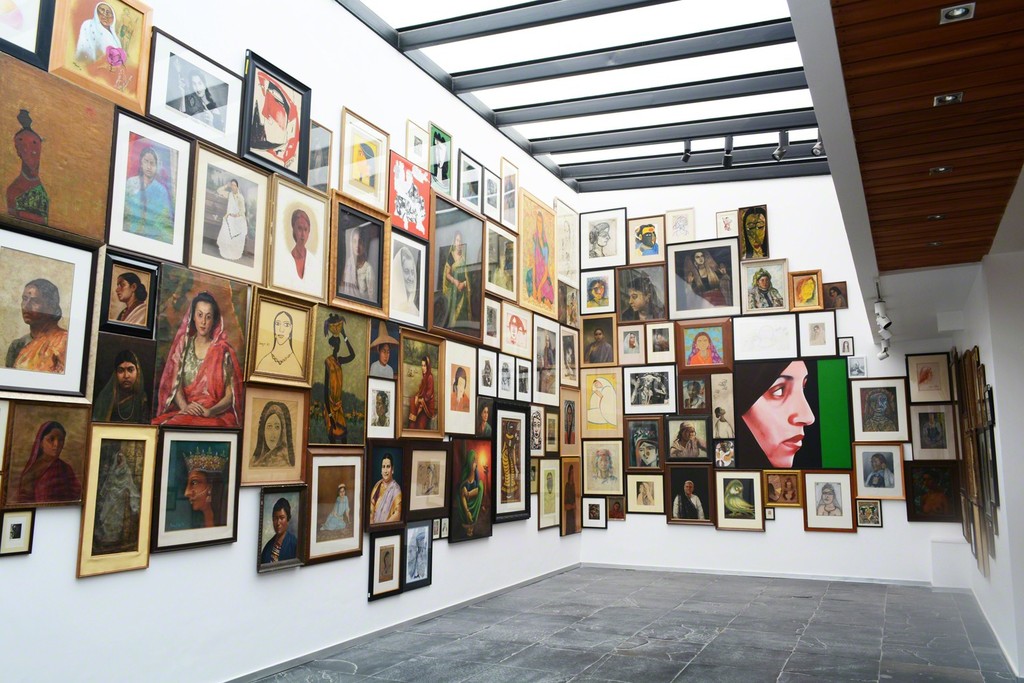 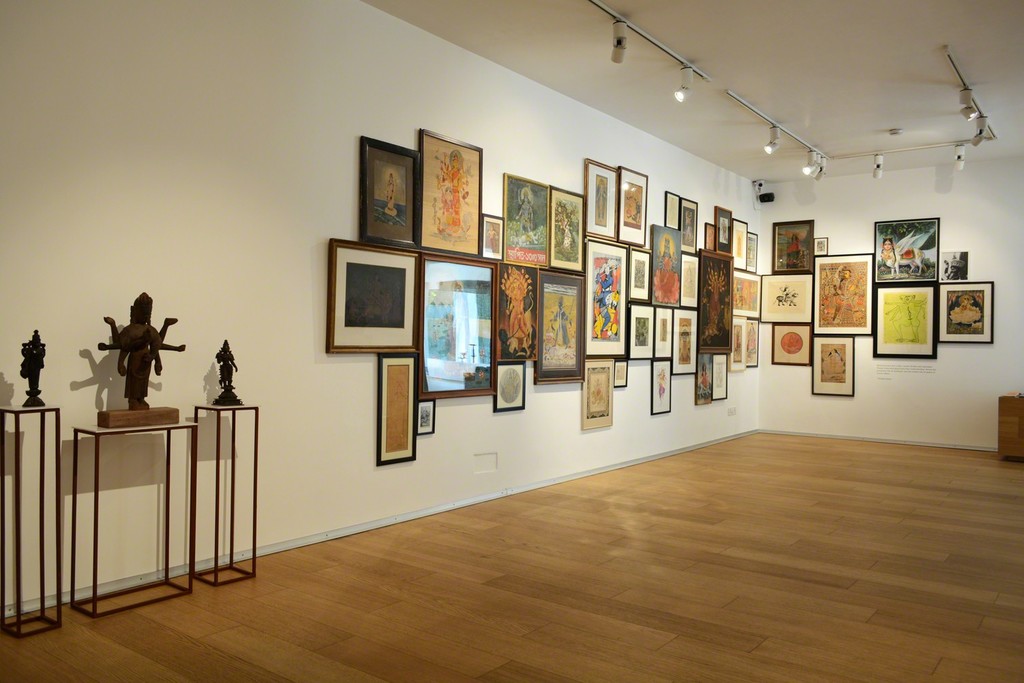 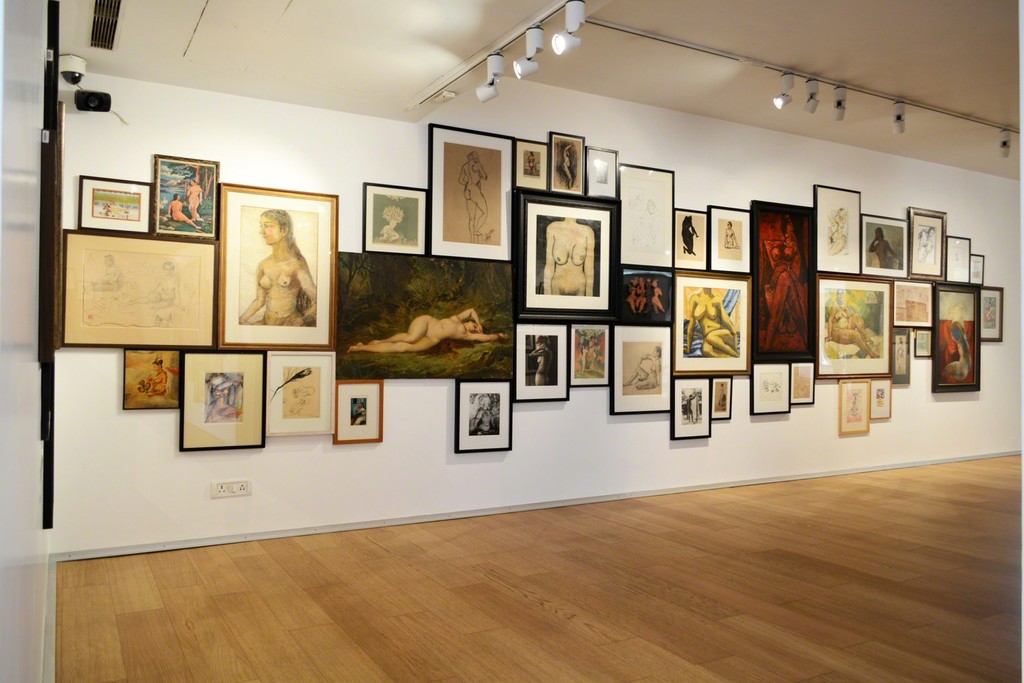 “I couldn't portray a woman in all her natural loveliness...I haven’t the skill. No one has. I must, therefore, create a new sort of beauty, the beauty that appears to me in terms of volume of line, of mass, of weight, and through that beauty interpret my subjective impression. Nature is a mere pretext for decorative composition, plus sentiment. It suggests emotion, and I translate that emotion into art. I want to express the absolute, not merely the factitious woman.” - Georges Braque

When we sat down to plan our annual show for 2015 we didn’t have a concrete concept in mind. The diversity of the art at the archive made it even harder for us to narrow down on one concept that showcased the enormity of the collection. A week into October, during our customary archiving procedure, we noticed that all that surrounded us were women. Happy women, angry women, groups of women, some crying, some smiling, others gazing into oblivion. It is one of the most prominent subjects of Indian art and, as the woman has held her place in our culture and history in many forms, more so, of this collection.

There is a word that modern Greeks often use to describe doing something with soul, creativity, or love — when you put “something of yourself” into what you’re doing, whatever it may be. It is called meraki. Every artist possesses an individual artistic sensibility which, when driven by raw emotion, truly manifests into his creation, affecting the form, composition and its dialogue with the observer. Divided into five sub-concepts, the exhibition spreads across time, mediums, scales and histories representing the woman as an expression of an emotion. It throws light on the stylistic diversity amongst artists in the expression of emotions, providing a visual comparative of the iconography associated with these emotions through history.

“Nature contains the elements, in color and form, of all pictures, as the keyboard contains the notes of all music. But the artist is born to pick, and choose, and group with science, these elements, that the result may be beautiful -- as the musician gathers his notes and forms his chords, until he brings forth from chaos glorious harmony. To say to the painter, that Nature is to be taken as she is, is to say to the player, that he may sit on the piano. That Nature is always right, is an assertion, artistically, as untrue, as it is one whose truth is taken for granted. (…)” - James Abbott McNeill Whistler

The kinesics in each artwork accentuates the dynamics between the two protagonists harmoniously engaging with each other. Also an oil painting titled ‘Marriage of H. H. Krishnaraja Wadiyar IV and Rana Pratapkumari of Kathiawar’ from the collection of The Palace, Mysore, Raja Ravi Varma's embellished oleograph of the graceful, sari-clad woman, which became an important motif in his time, standing unanimously with her husband in an upright posture, celebrates the conventional idea of the union of marriage. It portrays a kind of symmetry that could only exist between a husband and his wife. Contrarily, in contemporary art, Bhupen Khakar’s idea of love is emphasized by a close, physical tilt in the couple’s posture, while two men embrace in the backdrop. Owing to his satirical oeuvre, the woman, who is almost manly in appearance, makes you wonder whether it’s merely a guise or his conscious intent, perhaps, to challenge the socially accepted norms of harmony by making her look like a man. Whether it is Nargis’ hesitant hand in Arpana Caur’s ‘Pyar Hua Iqraar Hua’, or the reluctant yet suggestive position of the woman in Jyotindra Bhatt’s print, the conceptual intent of each artist is conveyed through the harmonious formation of the figures in the frame.

“Mysticism joins and unites; reason divides and separates. People crave belonging more than understanding. Hence the prominent role of mysticism, and the limited role of reason in human affairs.”

It has been said that the most beautiful thing we can experience is the mysterious. Throughout history, the female form has been associated with a sort of mystical element by virtue of her ability to create life. Early Indian arts and crafts saw the emergence of deified females as fertility goddesses. Artists grew up listening to mythological tales and stories like the one about the love-stricken Sadhu who, unable to attain the object of his devotion and love, immortalizes her by sculpting her as his goddess and taking her away with him.
From cave art, murals, folk art to works by the masters through Indian history, goddesses became a major theme in Indian art. Though certain avatars have been more popular in some regions, they all depict the same notion – devotion, a feeling that transcends social barriers like class, caste, colour and other man-made shackles. In most imagery, the goddess is always looking directly at the observer averring her power over them. In a multitude of reincarnations, Durga represents the power of the Supreme Being that preserves moral order and righteousness in the universe. Lakshmi is the essence love, fortune, beauty, material and spiritual prosperity, while Sarasvati betokens self-knowledge. As Kali, she is the annihilator of evil forces and the entity of time.
Though various depictions of deities was one of the most salient subjects of the Bengal School, the painting of the ten-headed Kali, or Dasa Mahavidya Mahakali, is an unusual work as artists predominantly painted Kartikeya and Ravana with ten heads.

The political situation during the British Raj, when Indian art was teeming with identity issues, led Bengal School artists like Abanindranath Tagore and Nandalal Bose to spurn the canvas and paint smaller works on Japanese paper. Bose’s watercolour of Durga is an attempt at rejecting modernist ideas and reinventing Indian art by representing the Devi. Whereas, the influence of the West, evident in Husain’s print of the contemporary Durga, is more prominent in the works produced by Bombay School artists. Other young artists, like Kulkarni, molded the foreign compulsion into a different understanding of the form, while the older generation continued to interweave visual conventions.

“A child draws the outline of a body.
She draws what she can, but it is white all through,
She cannot fill in what she knows is there.
Within the unsupported line, she knows
that life is missing; she has cut
one background from another. Like a child,
she turns to her mother.

And you draw the heart
against the emptiness she has created.

The definition of a mother can be summed up in fifteen words, but the relationship between a woman and her child knows no boundaries. She has the power to create life, nurture, feed and enlighten it so that, when the time comes, it may find its place in the world. Her role is eternal. Her love is pure.
Just as the maternal bond between the Santhal woman and her child is enunciated by her stance as she protectively hovers over him, Jamini Roy uses mellow, earthy tones to emanate a warm glow complementing the relationship between the mother and the child. The love that is reflected in Parvati’s eyes as she cuddles Ganesha is effortlessly translated onto the canvas by Bendre in his interpretation of this bond. In the image of Krishna with Putana, the rakshasi performs "the supreme act of maternal devotion" by allowing him to suckle her and he responds by doing so unquestioningly, despite of being aware of her intention.

Nakedness reveals itself. Nudity is placed on display. The nude is condemned to never being naked. Nudity is a form of dress.

There have been women throughout history who have inspired artists in more ways than one. As Henri Matisse once said, “ The living model, the naked body of a woman, is the privileged seat of feeling, but also of questioning…the model must mark you, awaken in you an emotion which you seek in turn to express.”
The perky tribal women and their carefree attitude towards sexuality in Sunil Janah’s photographs owes to the simple fact that nudity isn’t a garb they adorned, it was their way of life, and probably still is. They look straight into the camera without any inhibition because, for them, nudity is a culturally accepted way of being. On the other hand, Sushil Chandra Sen’s model, most likely from the city, is very aware of the artist’s gaze causing her to look down. She strips out of her clothes, which mean more than just clothes to her, they symbolize her dignity, and wears the dress of nudity for the artist to draw. The rigid sexual mores of the city and its restless atmosphere are apparent in her acquiescent demeanor behind which she hides.

Looking at Sunil Madhav Sen’s use of bold lines and colours, his ‘Seated Nude’ emulates his desire to merge conventional Indian folk art, bearing roots in Bengal School, with the Western Cubist art of the likes of Picasso and Braque. While Jamil Naqsh explores the modern expressionist mode by distorting the conventional views to exhibit a sense of movement and dynamism through a juxtaposition of forms creating a quasi-sculptural feel to his paintings.

‘Love in full life and length, not love ideal,
No, nor ideal beauty, that fine name,
But something better still, so very real
That the sweet model must have been the same.

And oh! The loveliness at times we see
In momentary gliding, the soft grace,
The youth, the bloom, the beauty which agree,
In many a nameless being we retrace,
Whose course and home we know not nor shall know
Like the lost Pleiad seen no more below.”

With the passage of time, the art of an era goes onto become its historical signifier as it aids in classifying cultures, establishing periodizations, and observing the distinctive and influential characteristics of art.
Portraits, in particular, reveal the very best of a culture as the subject is conscious about the way they want to be remembered. They will always be sitting straight-backed in their best clothes, not giving away more than what they want to be seen.
The first few women in India who were given the liberty to fulfill their desire to be immortalized on a canvas were the Parsis. Their high standards of living and favourable relations with the British led their culture and lifestyle to be heavily influenced by the West. Indian artists were commissioned to come and paint them, according to their requirements, in the comfort of their own homes. While most artists were confined to the elite and royal families, Dhurandhar used to paint portraits of women from different sections of the society. Gradually, as you can see, this trend trickled down to other classes.