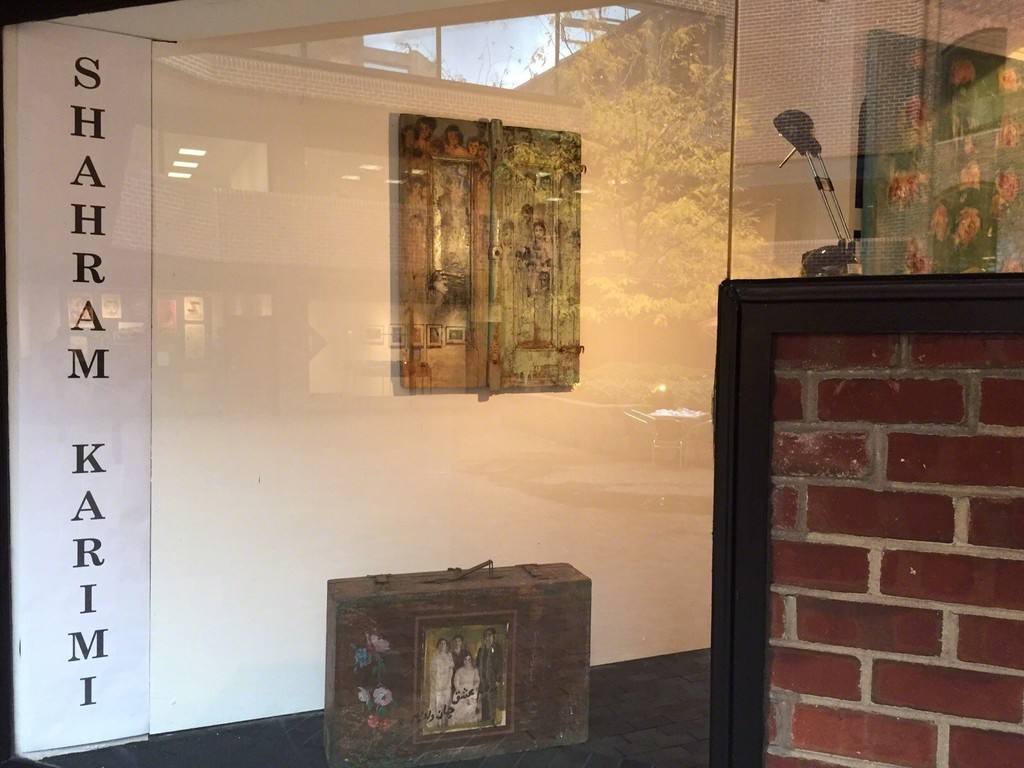 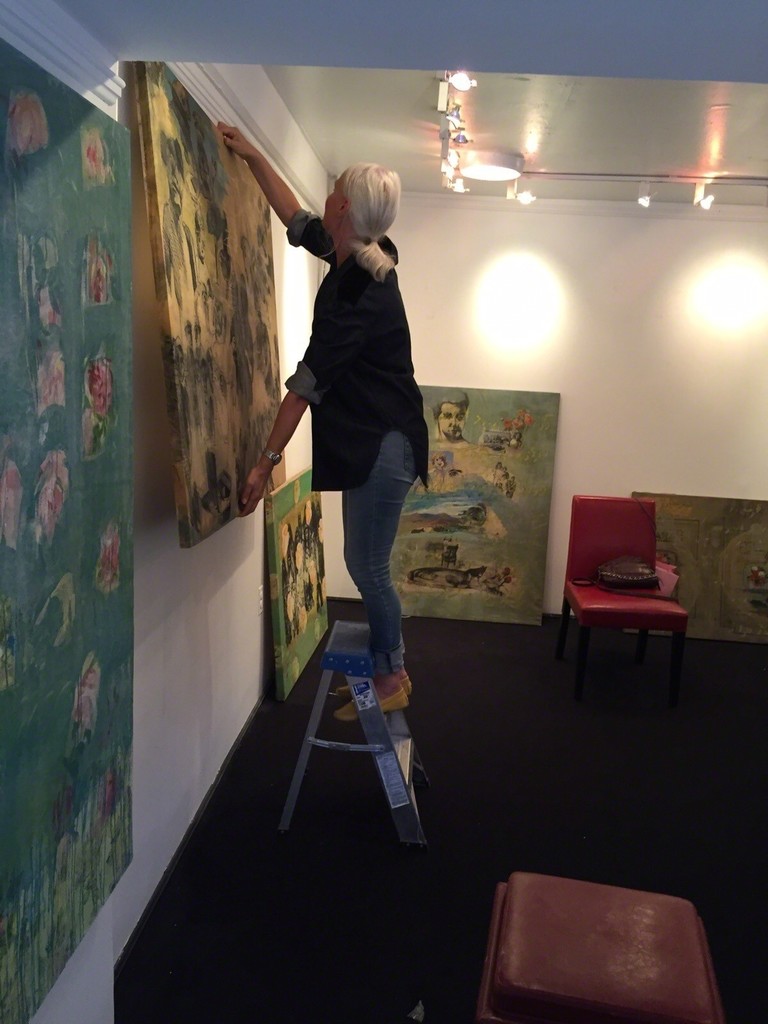 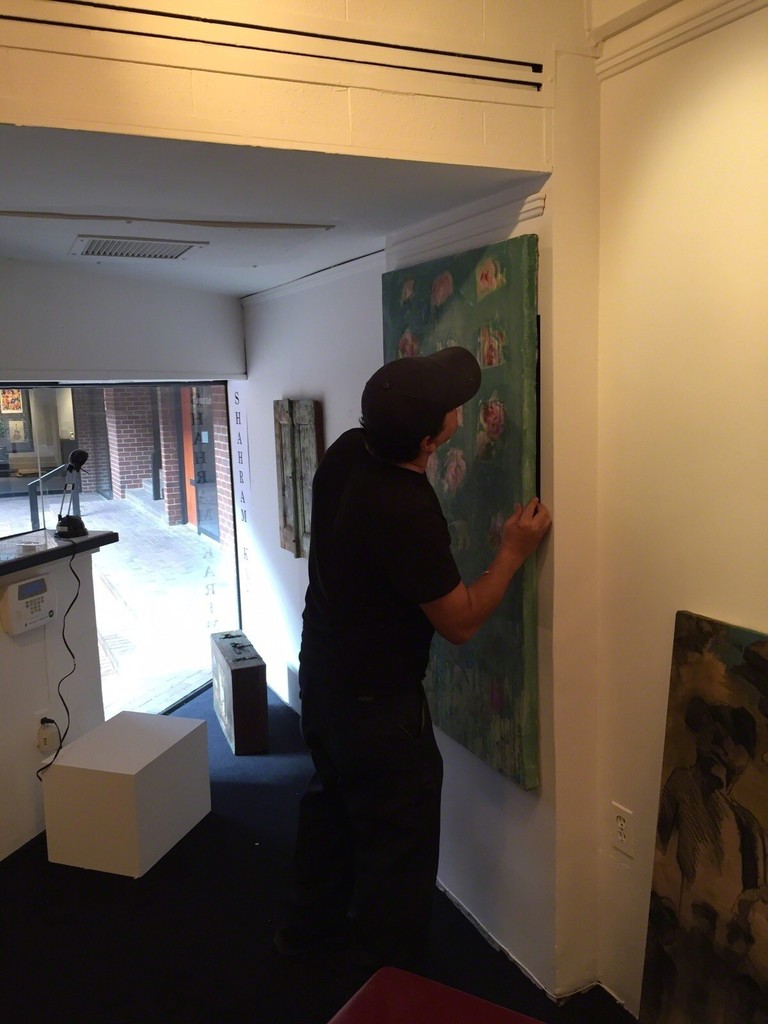 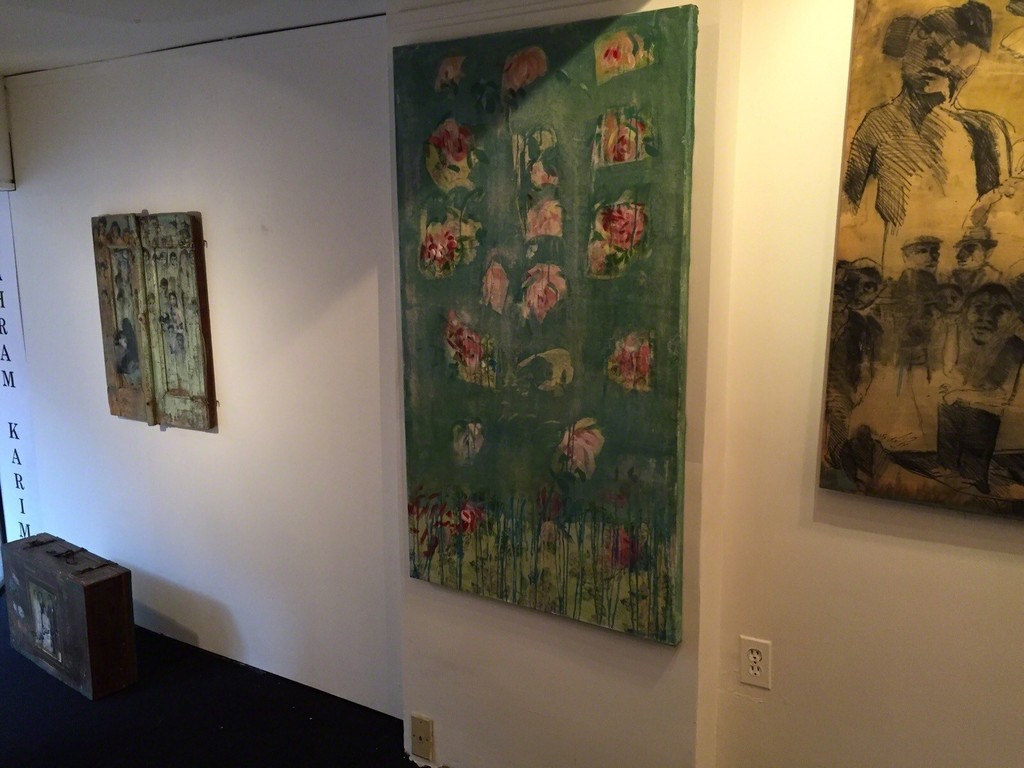 Shahram Karimi’s works in this exhibition speak both of dreams of the past and of transnationalism and its concern with the present. He often conjures memories of his childhood and family life in Shiraz. He is constantly engaged with questions of identity and memory, which have preoccupied him for more than two decades. His various images from everyday life in Iran evoke memories of an idyllic past often silenced in today’s Iranian film or press imagery.

His inspirations are many from late 19th and early 20th century Iranian portrait photography, religious iconography to naïve paintings created for coffeehouses. Karimi mixes an awareness of Western artistic practices and the local modernism of his homeland. On the one hand, the painterly treatment of his work and its unfinished, raw look with paint dripping down the edges of the canvas, gives it a contemporary international edginess. On the other hand, the use of indigenous photographs, the relationship of word and text, and the subtle references to religious iconography, are derived from the painterly practices of his youth in Iran.

Karimi paints on found fabrics and objects (suitcases, chairs, even doors and old pieces of furniture). In this exhibitions are two of those artworks; one on rice bags and one on a window. Working with colors including blues, greens, reds, and pinks, Karimi creates dream-like landscapes of figures and scenes that are neither here nor there; they exist in a time and place that is in between the past and the present. Karimi’s work belongs not to a single time, place or even to a single medium, but transcends all boundaries

In her catalogue essay Dr. Layla S. Diba writes, “Shahram Karimi’s work speaks both of exile and its dreams of the past, and of transnationalism and its concern with the present. He conjures memories of his childhood and family life in Shiraz and frequently alludes to contemporary political events in Iran and beyond. One of his most moving works, Traces, memorializes 248 modern Iranian activists, artists, poets, and intellectuals—a virtual visual history of the intellectual and cultural life of the period.”

Shahram Karimi was born in 1957 in Iran, and grew up in Shiraz, the famous city known for its medieval poets and 19th century rose gardens. In 1979 in Tehran, he was already working as a painter and was showing in group exhibitions in galleries and museums, when the revolution broke out and forced him away from his beloved homeland.

Currently living between Germany and New York, Sharam is a multi faceted artist of many talents. Aside from being an internationally acclaimed painter and production designer, Karimi’s work includes tremendous written poetry, lyrical video installations, short documentary films, as well as fashion and accessory design. He has also worked as the production designer on many of Shirin Neshat’s films, most recently Women Without Men. His art has been widely exhibited in Iran, the United Arab Emirates, Turkey, Germany, Italy, and New York.

Syra Arts has been promoting contemporary Middle Eastern art and artists in the United States since 2011. The gallery, which represents some of the Middle East’s leading contemporary painters, sculptors, and jewelry designers, strives to give a glimpse of the depth and diversity of contemporary art the region by showcasing work by artists of different generations in a range of artistic mediums.