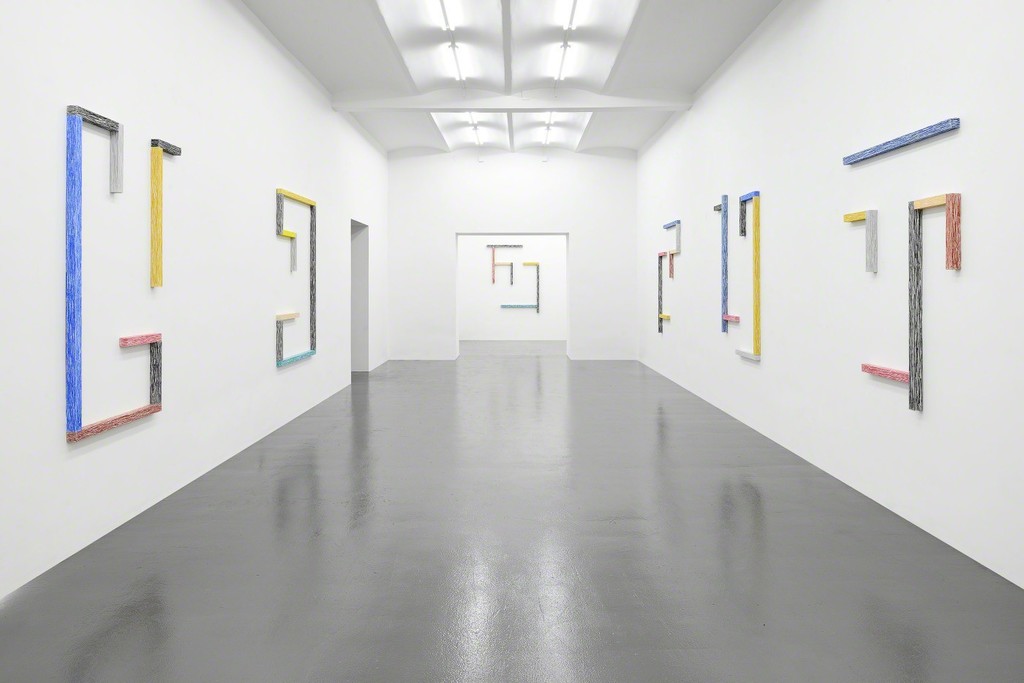 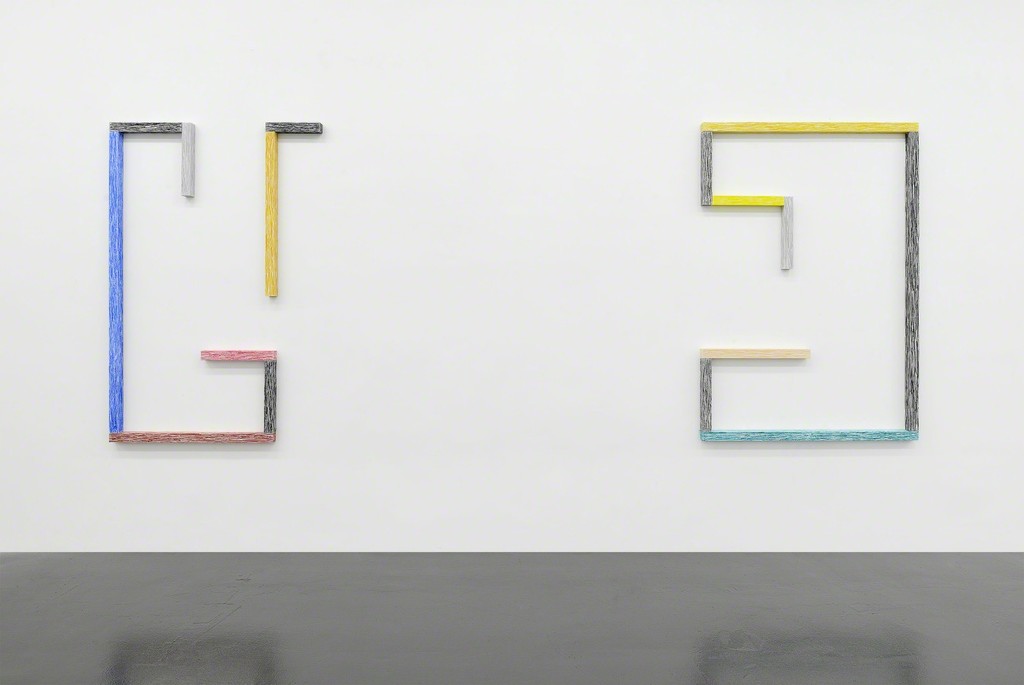 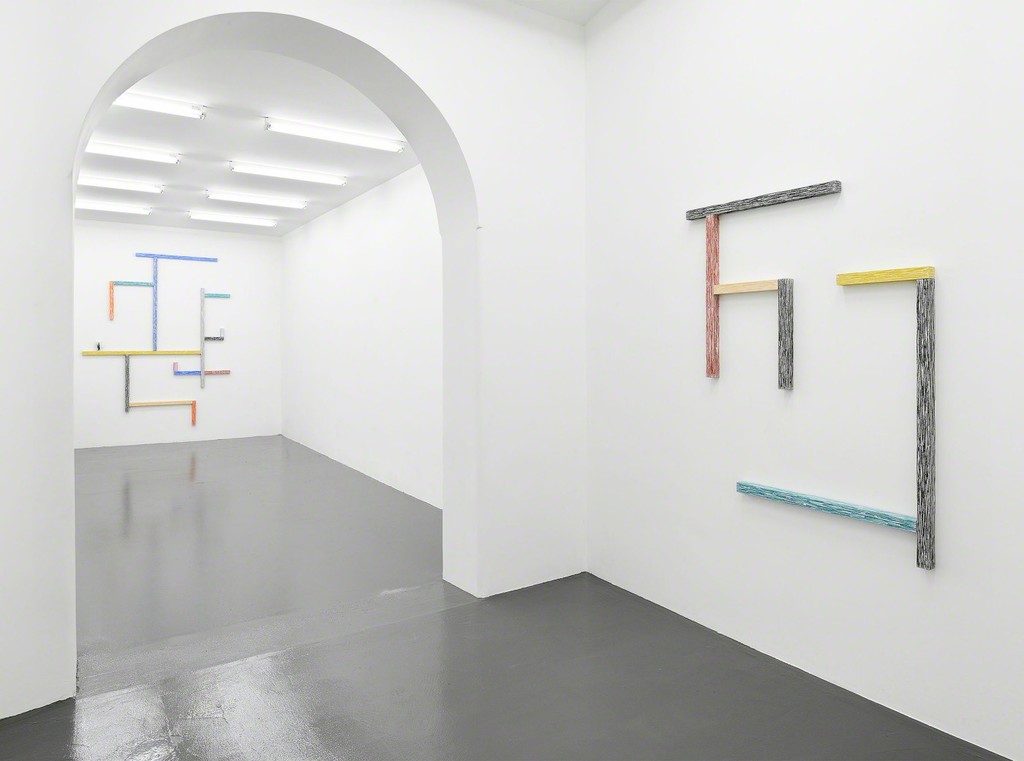 USA Objects, the title of Strauss Bourque-LaFrance’s exhibition at T293, refers to the seminal 1970 book on American Craft, Objects: USA. The works in the show pay homage to American Craft, geometric abstraction, and graphic design. Each piece is made of hand-painted, modular basswood units organized into compositions that resemble faces. This gesture is typical of Strauss’s work, as his abstractions are often, mystically, related to the body.

American craft objects are indebted to the lineage of European craft objects that came before them. Just as American Motifs reference European Motifs dating back to the Byzantine era. The same is true of American modernism; it has direct ties to European modernism. But what makes America’s particular aesthetic unique, and divergent from our ancestors’ has to do with our ties to individualism, property, Manifest Destiny, and Fordism. Our craft movement borrowed from puritanical Britain, the Native Americans, and the Shakers. The industrial revolution allowed for mass production and our relationship to craft merged with our desire for ownership. Think: Model planes, model boats, and marching bands (something about USA Objects makes me think specifically of flutes inside their cases). Eventually young American hobby Tommies grew up to own cars, boats, and vacation houses. They became aspirational, they fulfilled their aspirations, they became aspirations.

An earlier title for the show was THE GRLS, a title with an image that relates glyphically to the shapes of each work, and the female artists the pieces were originally named after. Though the irony of this title is only fully activated when we think of the works under the umbrella title given to the series, USA Objects. The objects, with their old-fashioned Americana names; Betty, Joan, Agnes and Helen evoke our culture’s proprietary relationship to women and things. (Consider ‘Miss Louise,’ the cuddy cabin boat owned by my uncle in the late 80’s). The GRLS’ names also pay homage to actual women whose artistic careers were not recognized until the end of their lives (the space between grls and old ladies pointing to a sad irony). Strauss’s redesigned, graphic shorthand for girl relates to the diminutive gurl and boi, softly gendered nouns used by queers to break down stubborn, linguistic, binary blockades like man and woman. Ultimately the titles in the series grew to incorporate a wider net of influences like Robert (Morris, Irwin), Peter (Halley), John (Armleder, Chamberlin, Cage). This eventual inclusion of men’s names opened up the pool of references to include ideas about minimal objects and their makers, and the stereotypes they engender. Boys be objects too.

These GRLS, and boys operate, in a way, like the back of a frame. They turn the painting around, they are the structure and the painting at once. Like Picasso’s frame-back sculptures they reveal something pitiful in the illusion of an image. Their scribble motif relegates them to the world of things touched (just outside the reach of painting), while their simple rectangular compositions evoke Piet Mondrian, and his De Stijl. Stijl, a word used to describe “The Style” or neoplasticism, has a secondary meaning used in carpentry to describe a post or jamb made by crossing joints.

Strauss’s nod to joinery (his father’s hands) and De Stijl (obvious in the color as well as the composition of the work) seems to be made more out of love than critique. His sense of design and desire for strong, bold simplicity is self-reflectively aspirational sans the socialist dogma of some of his early 20th century European referents. Another way these pieces are “American” is in their reverence to individual identities: the titles evoke camp -Louise (crying while chewing gum)- and this dubbing of the work seems to acknowledge the importance of naming and renaming in a country where minority voices are chronically usurped by even well-intentioned patriarchy.

Despite the critiques and many layered meanings in this work there is a joie de vivre in USA Objects that I am sure will remain fervent as the series evolves in and out of abstraction and representation. Each individually painted (or scribbled) piece of basswood is like a pastiche of Strauss’s mother’s paintings. She worked from home, creating pieces that were like remnants of folk theater. Whether it was a landscape, portrait, toy, or housewares no surface was left uncomposed of tableaus or trompe l’oeils. Strauss told me that during his childhood his mother showed him Steiglitz’s nude photos of Georgia O’Keefe to teach him “that bodies and art are inseparable phenomena.” And it is with this moorland of influences that Joan (Empty Alter, Empty Bed), and John (Father Figure) were born.