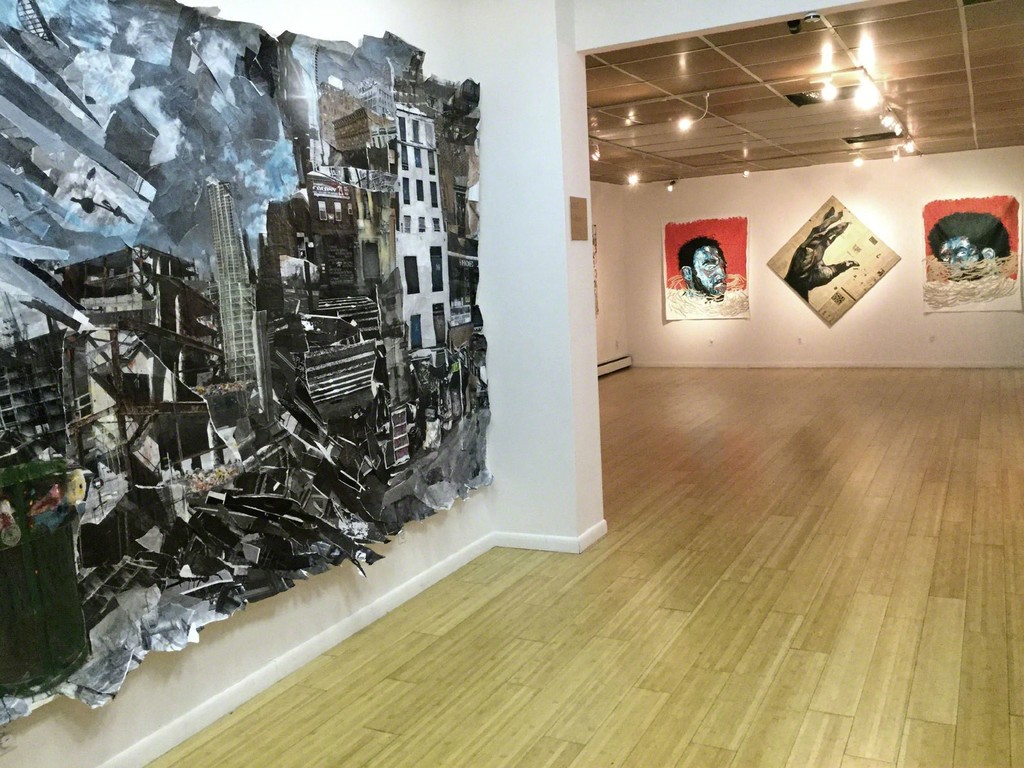 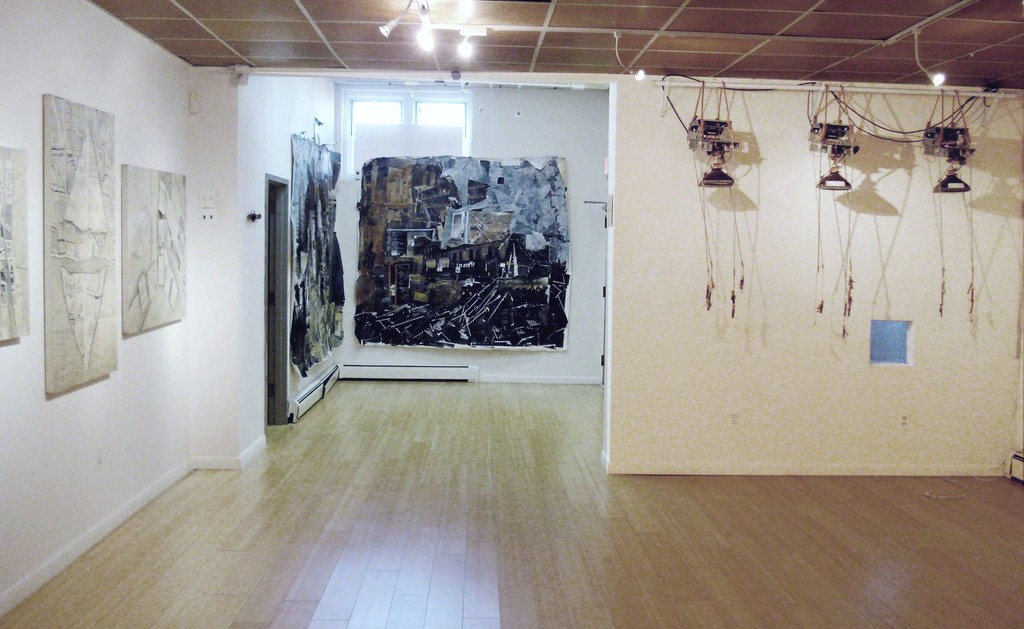 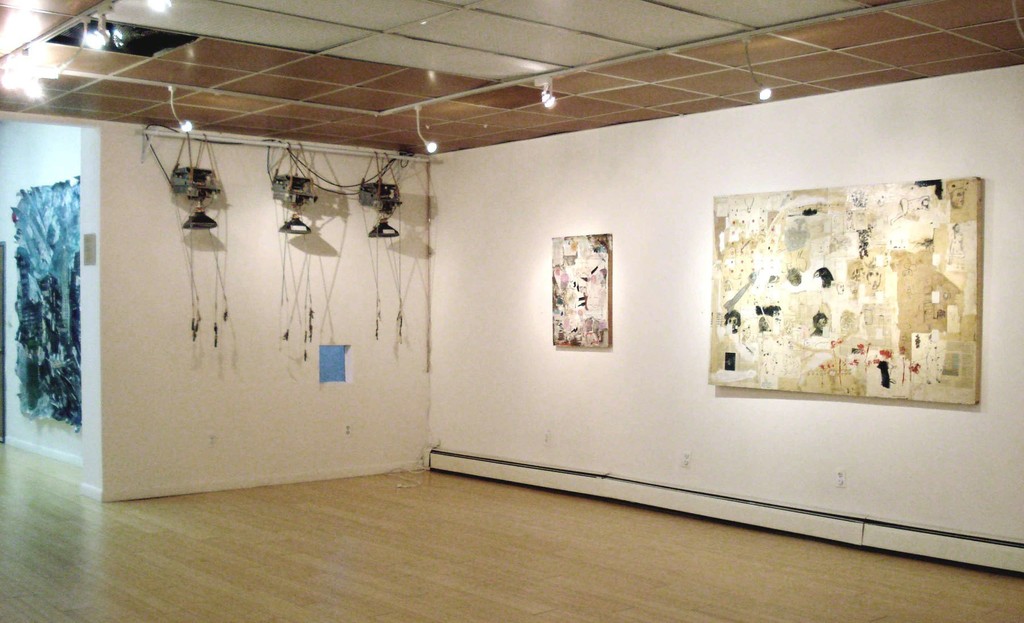 ABOUT THE EXHIBITION:
FAKE NEWS
"art and artifice"

Unlike the title would suggest, "FAKE NEWS, art and artifice" is not solely a political exhibition.

The term, FAKE NEWS, has entered our everyday lexicon referring to a simplistic dismissal of factual information, which thereby attempts to turn verifiable truths to fiction. Conversely, in artistic expressions, often just the opposite occurs. Truth is revealed through fiction. Ironically, considering the term, many of the works included in FAKE NEWS, actually augment the "truth" of the printed word, through individual artistic expression.

Throughout cultural history, stories, visual images, and songs touch us with the emotional truths they reveal. We can look to timeless Greek tragedies, Shakespearean farce, Renaissance paintings, opera, folk tales and fables of all nations to experience expressions of truths. Spanning beyond time and place, the fictions provided by art, reveal the soul, heart and essence of mankind, their inner lives, motivations, and desires.

Most works included in this exhibition reference, incorporate, or mimic publications which utilize the printed word, often in the form of a newspaper, informational documents. Also included are works that utilize video, as another source of informational content. Whether the inspiration is photographic illusion, the sociopolitical content of a story, a headline, the existence of publications in daily life and culture, or simply the visual character of densely arranged printed words, each of these artists has been inspired beyond the mundane ubiquity of the newspaper, to create their own visual truth.

Stylistically, there are works with both random and targeted collages, psychological and sociological themes, almost incidental reference to newspapers, painstaking reproductions of printed text, as well as video projections.

ABOUT THE ARTISTS:
Known for their large scale, site specific installations, Ginger Andro and Chuck Glicksman work with moving sculptural elements, video, audio and sensory stimuli in their multi-media work. In the smaller scale work, Plastic USA, the Andro/Glicksman art team has created a “tiny nation” within a plexi-glass box using similar signature elements. They threaded together hand cut plexi-glass shapes of American states with aromatic spices from around the world, and with a video of past and current immigrants, bringing into question what they describe as the “fictional notion that the USA is a solid and fixed entity.”

John Avelluto skillfully challenges the viewers belief in what their own eyes see. The seemingly familiar sheet of ruled or burnt paper is actually a superflat acrylic paint sculpture. He uses paint to, in his words, "physically (re)create the object that it represents (the 'paper' and all contained on it are made entirely of acrylic paint) rather than rendering an image of it." Of his subject matter, Mr. Avelluto says, "Loose-leaf paper, hand and type-writing are leaning toward obsolescence and perhaps soon into extinction in the face of digital media."

Stephen Basso feels media news, by its nature, has always been negative. He says the phrase "No news is good news" comes to mind. But with the advent of 24/7 news cycles, the internet and shoddy journalism have pushed the anxiety level to new heights. His work has consistently been seeded with an anxiety, often coupled with a dry humor. He finds it oddly comforting that in this age of technological advances, human beings have not changed very much. And the human condition is clearly his wellspring of subject matter.

The To Be Free project by Sophia Dawson, explores, through portraiture, the stories of the 20+ remaining US held political prisoners who were jailed for their activism in the black liberation movements of the 1960's and 1970's. The project utilizes art to call attention to their continued imprisonment and to advocate for their freedom.

With his casual, gestural application of paint, the vibrantly buoyant works of Carl Dimitri display skillful draftsmanship and profound selection of focus. He says, " Most of these paintings arise out of the pressure of world events. They are also inclined toward the universal and what is un-sayable."
William “GoodWill” Ellis fuses his love of community, with music and art to create visceral experiences. His series, The Drink, explores the history of people of African heritage in the Americas and their complex relationship to water. The Trans Atlantic slave trade was simultaneously the most detrimental event to people of color while being the most lucrative for the founding of the United States. Approximately 2 million Africans died in the middle passage while the others who survived found themselves in unspeakable generational servitude and abuse. The works were created at the Black Gotham Work Space in lower Manhattan as part of their visual story telling efforts.

Daniel Genova often uses humor and irony in his mixed media works. He characterizes the theme of the exhibition very well with his statement, "As a contemporary artist, I think it is important to make a statement about your time. By incorporating portions of newspaper clippings or magazine periodicals in art, an artist puts a stamp on it. If you look at the work of Picasso, Braque, Ernst and many, many others through the course of art history, you see how the artist has transformed these message and/or images into something that works within the framework of their own personal, visual dialogue. Sometimes it is literal, sometimes not. Whatever the case may be, these snippets of information for me have become a source of inspiration that expound upon of the world in which we now live."

Kate Fauvell uses collage, photography and painting to explore what it means to be human. She is a visual story teller. Her current body of work, A Love Letter to My CIty, uses photographs the artist takes daily to create large scale collages archiving our ever changing city and times.

robin holder's Veterans Day and Martin Luther King Jr. Day are part of her handmade artist book series, Our Social Skin. Each book represents a federal holiday of the United States of America. Using mixed media technique, and fabricated in the shape of an article of clothing, these artist books represent the complex and often painful conflicts of our American identity.

Newspaper accounts of atrocities against infants propelled the series of etchings and monotypes by Ellen Coleman Izzo. Inspired by the early 90's, when there seemed to be daily accounts of dead children found in the garbage, discarded by a parent, she says, "It felt like an epidemic was upon us. Using articles from the newspaper within my prints affected the readability of the reports. Partially obscured or highlighted text created a gap in the facts of the story and a desire to continue to form a story. What really happened in these cases and why did they continue? What are we to do with this information?"

Peter Patchen uses technology, e-waste and mixed media to explore what he sees as a symbiosis between nature, culture and technology. Blending politics, tech fetish and trophy culture he creates artifacts or relics of future histories. The work included in this exhibition addresses the symbiotic relationship that exists between our tools, our culture and our physical being.

Elyse Taylor has always been fascinated by the look and layout of printed material. As a former graphic artist, the design of a page of the New Your Times was of special interest. These pieces are pages that had specifically interesting phrases which appear and become her titles.

Call 718.833.9100 for additional hours, events and schedule updates.
[email protected]
http://www.tablarasagallery.com/
*
Directions to Tabla Rasa Gallery:
The gallery is located two express subway stops from Manhattan on the "D" or "N" train to 36th Street Station, plus one "R" stop to 45th Street.
By car, Tabla Rasa is on 48th St between 2nd and 3rd Aves, Brooklyn. Ample street parking is available.

About Tabla Rasa Gallery
Tabla Rasa Gallery is located in the burgeoning art destination of Sunset Park, Brooklyn. The gallery is known for their consistently stunning exhibitions. Within the 4000 square foot turn of the century carriage house, the gallery exhibits primary and secondary market artwork by emerging, mid-career, and established artists, in all media, including painting, sculpture, installation, drawing, print media, digital, film and video.
*
Exhibitions are free and open to the public. It is recommended to call 718.833.9100 for events and schedule updates.