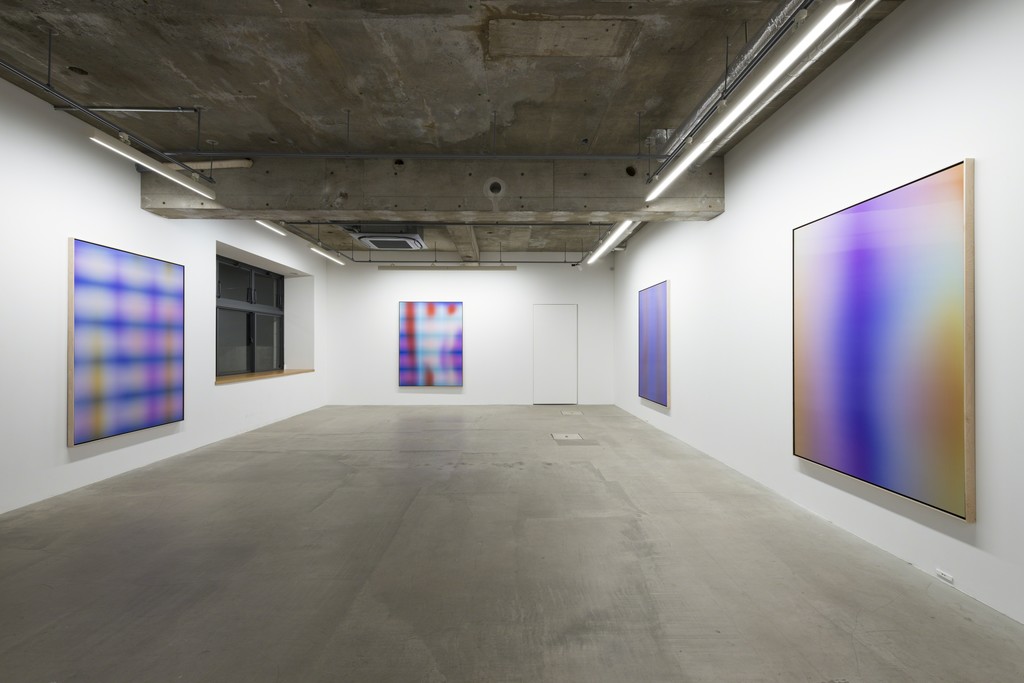 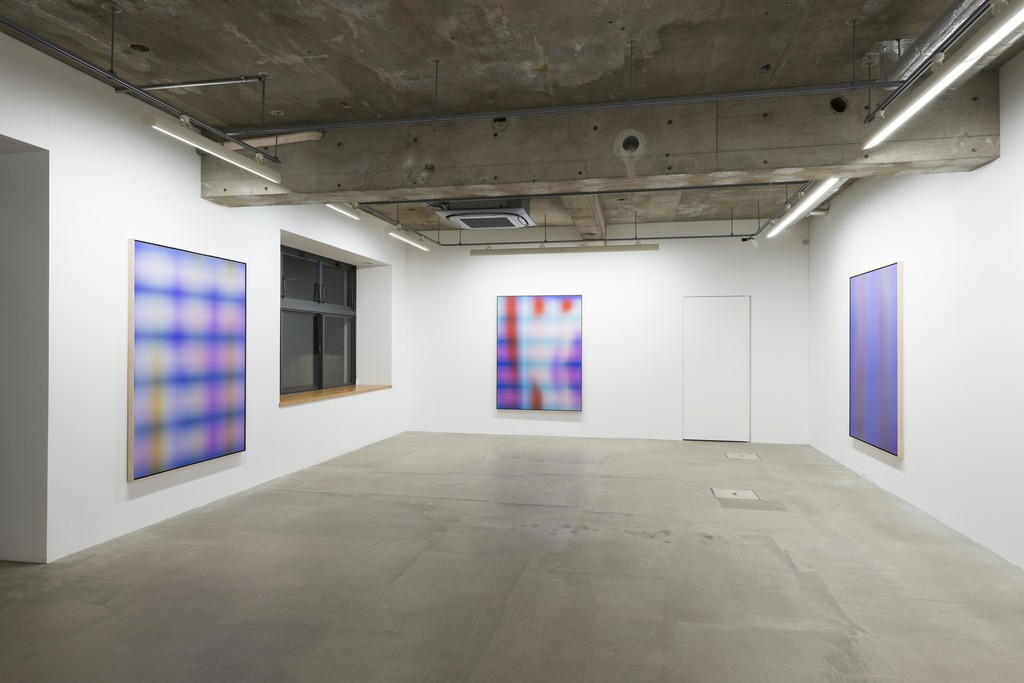 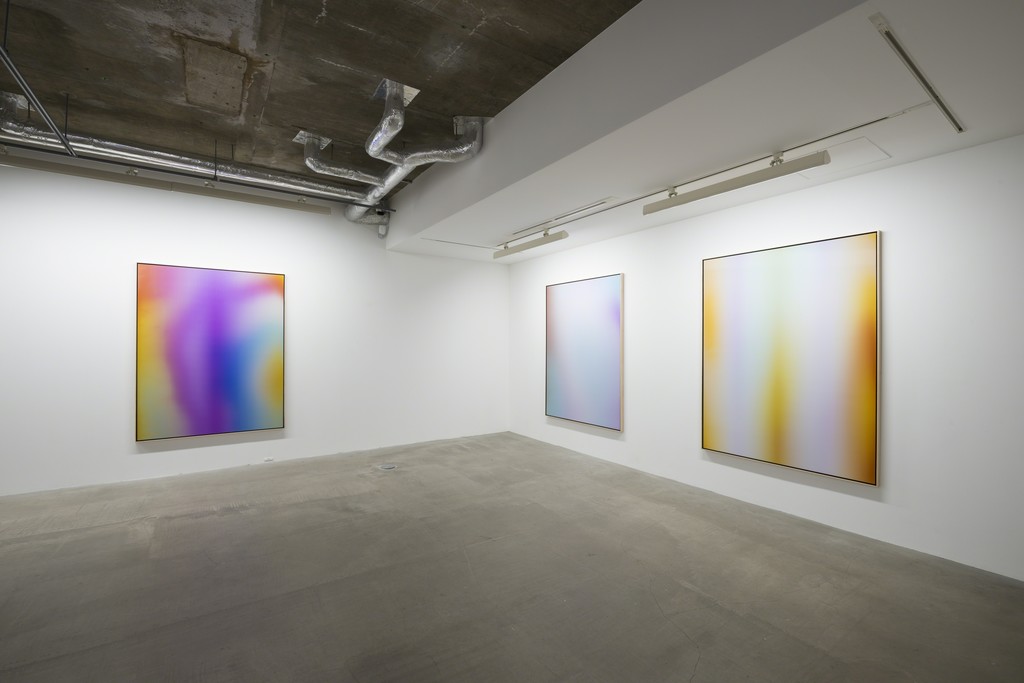 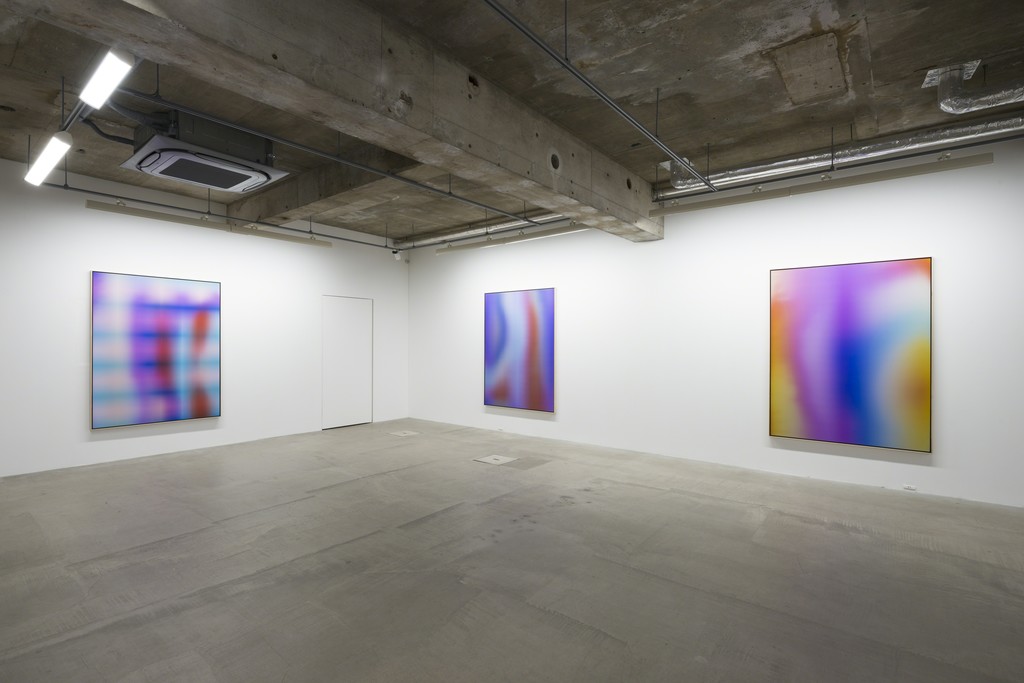 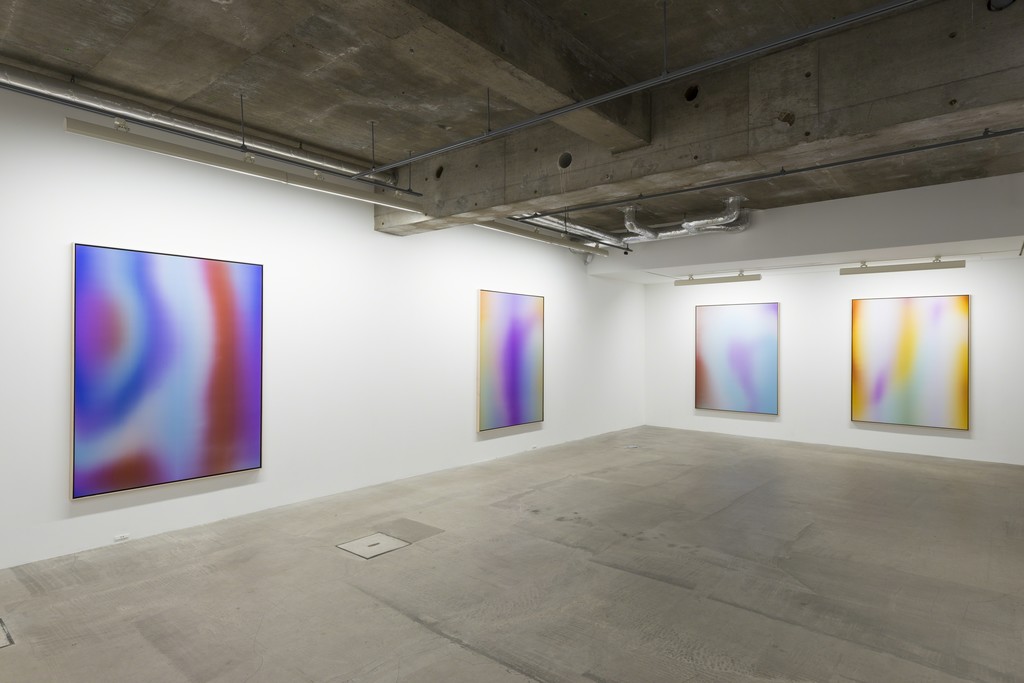 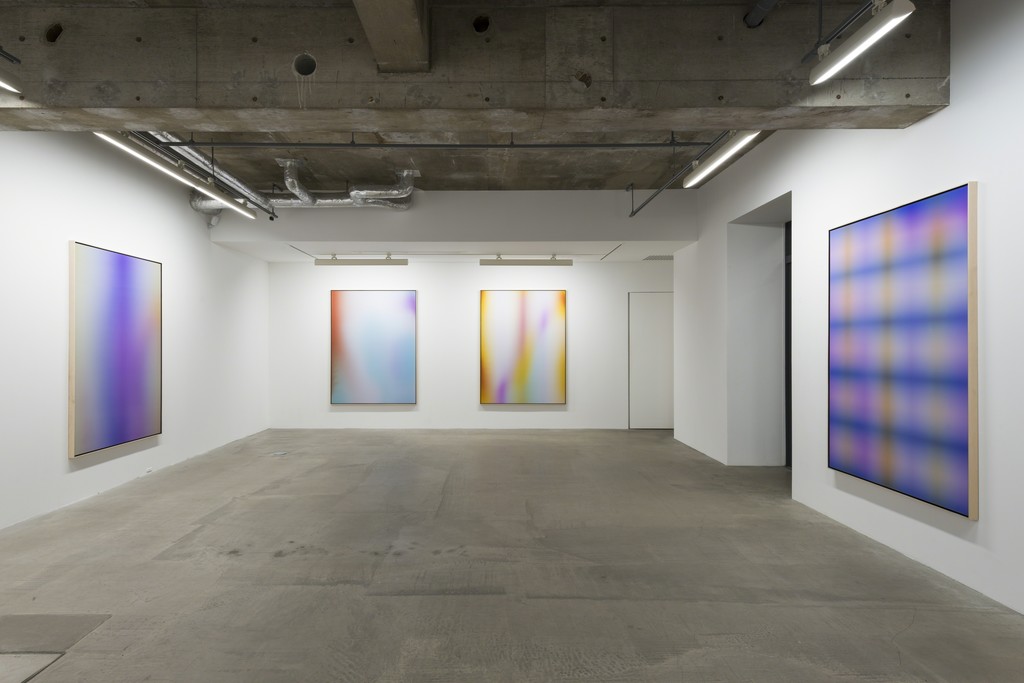 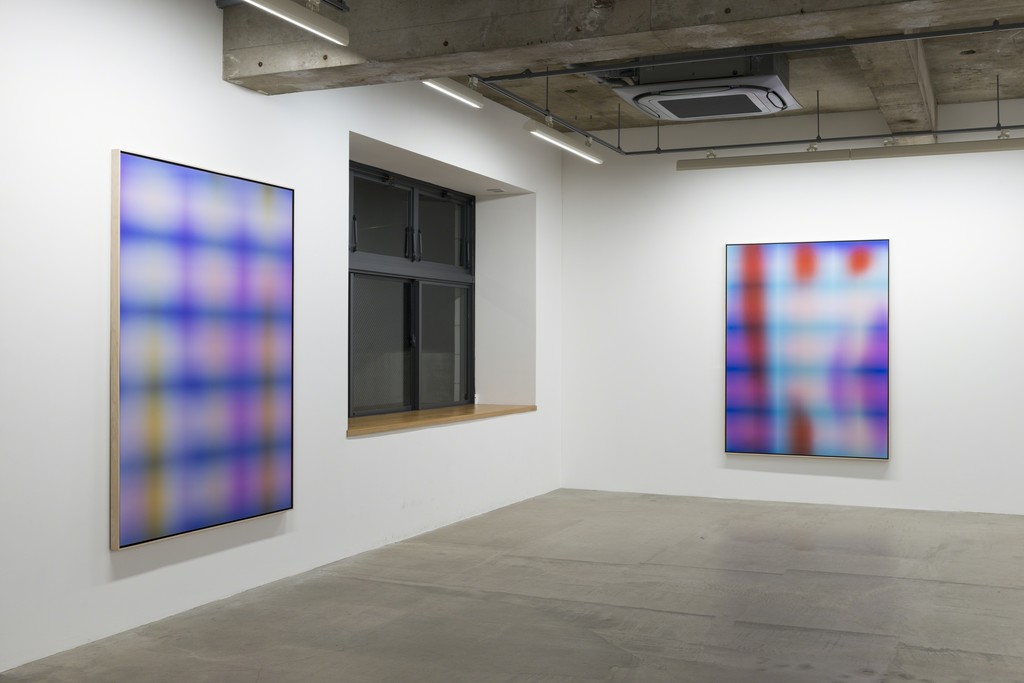 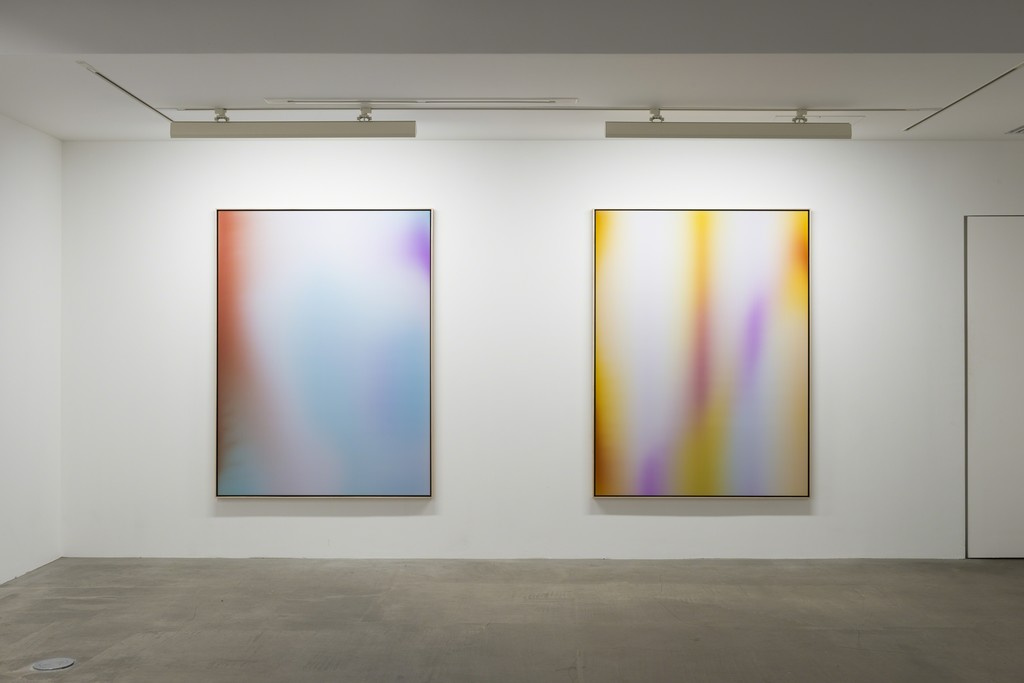 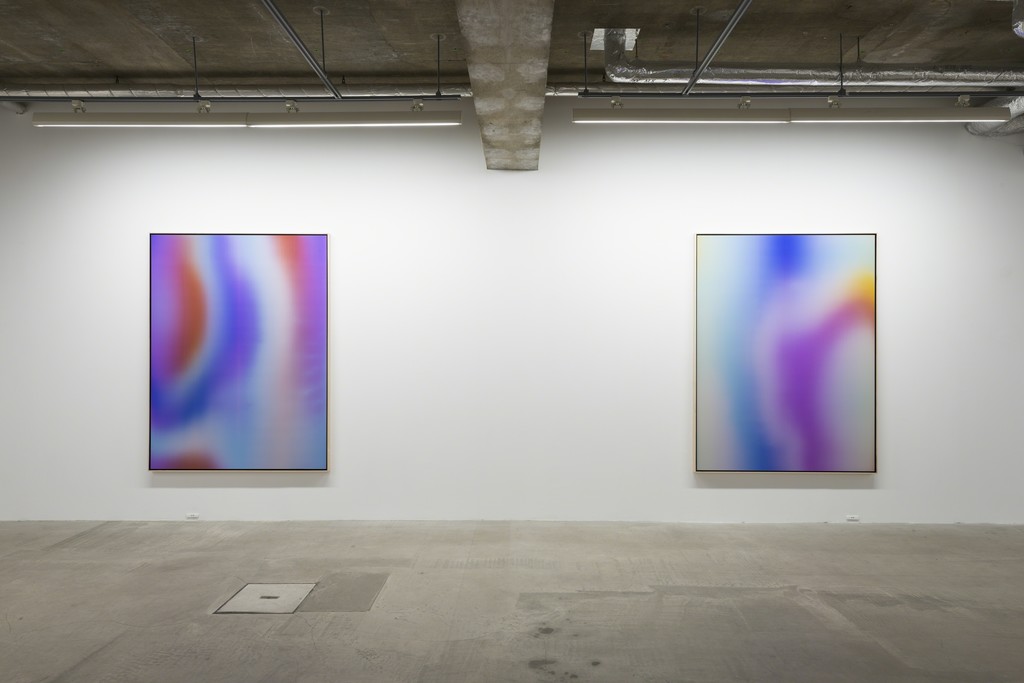 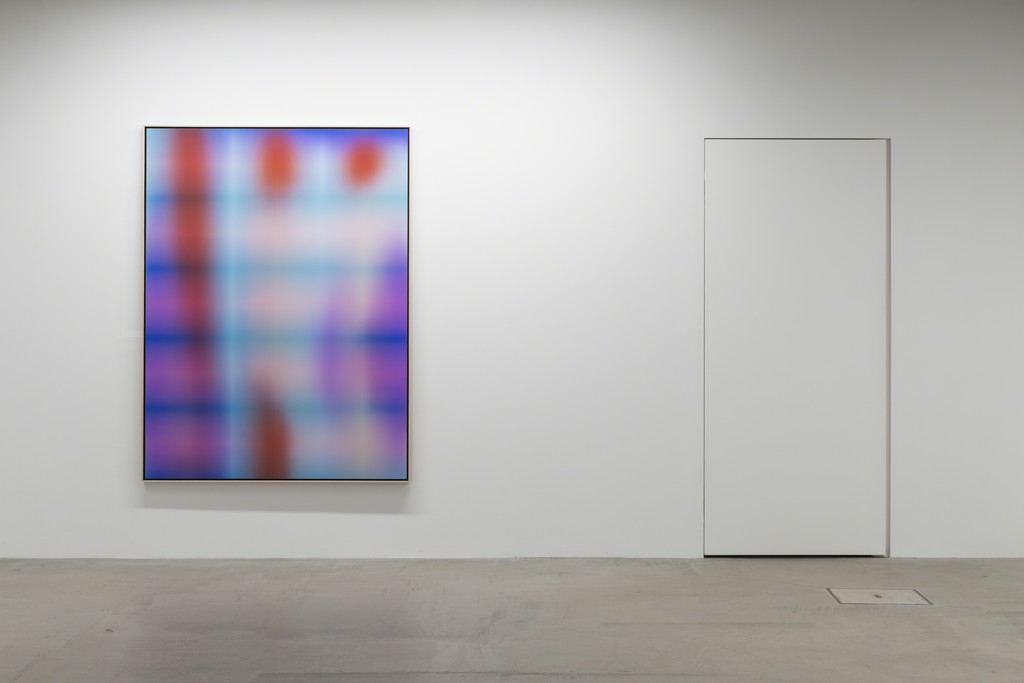 As typical of an artist who uses mainly new media, Rafaël Rozendaal’s approach to materials and techniques has kept expanding in recent years, encompassing now even the traditional area. This may be considered an attempt to externalize the vision which originates in the “digital” or “internet” quality of his characteristic websites and installations into a stand-alone existence steeped in everyday life.

Lenticular painting and tapestry, currently the artist’s primary area of works, are familiar to us as industrial material and craft products, yet the mechanism of the lenticular sheet is in truth similar to that of a display screen, and even to the surface structure of the monitors or projectors using the RGB color range to reflect his works into open space. In the case of tapestry, the jacquard loom used for its production is said to have been the origin of the computer. Moreover, it is a material that enables a tangible visualization of colors and forms. Through his explorations and practices, which climb back to an era seemingly unrelated to digital expression, Rozendaal sublimates his roots as a pioneer of net art, allowing his own identity to flow back freely into the timeline of technology and history.

Around the beginning of the millenium, when Rozendaal began his activity, was a time when the internet started showing more and more use on a daily basis in its broadband and wireless forms. In the process of creating his trademark websites he became attuned to the architecture and the flexibility of the network. Comparing the internet to a “tube”, he considers that the process of installing a program on to a server is similar to the primitive act of creating murals. As such, his unique way of understanding the internet has gathered much attention. Because Rozendaal’s expression began by using the internet as a background, his works have always been admired for being cutting-edge and futuristic, yet, on the other hand, what you actually feel from his creations are a humor full of humanity, clarity of thought and a nonmaterial beauty.

This beauty has found its best expression in his new range of lenticular works presented in this solo exhibition. The lenticulars here are similar to his installations which use mirrors and projectors, as both are able to dynamically reflect light. It may be said that Rozendaal’s characteristic motives – specific colors, the contrast of light and dark, various patterns, movements and types of interaction – which he was once able to draw only on light emitting displays, have taken a step further towards material painting. However, the illusion formed by light reflecting off the surface of a lenticular is different than the illusion seen in trompe l’oeil or op art since it does not rely on the limit of human eyesight. It is rather the medium – the lenticular sheet itself – that which has the property of freeing the colors dwelling in the rays of light, making them visible to the human eye.

After becoming aware of its limits as an art based on illusion, painting as a genre has reached the level of abstraction developed in the twentieth century, and afterwards the stage of the “Schein” (appearance/radiance) seen in Gerhard Richter’s works. Even so, couldn’t we dare to expect that the new reality of painting, sculpture and photography, as well as the art which we cannot imagine yet, be born out of the digital realm, such as in the case of Rozendaal’s works? The six lenticular paintings that make up this exhibition leave us unable to catch the true essence of the image which changes depending on the viewer’s perspective. At the same time, due to their changing quality, these images always keep their freshness, and it can be said that they reflect the outward scenery which keeps changing at an accelerating pace. Rozendaal’s works – in which there is no attachment towards things that have shape, but show rather complete freedom and playfulness – seem to inspire hope for that what we call “painting”.

Born in 1980 in the Netherlands, Rafaël Rozendaal is known as a visual artist. Although based in New York, he works everywhere in the world, as you can see from his Instagram pictures. He has been creating website art woks since 2000 and has expanded his activity range to installations, lenticular works, fabrics and even poetry. Among the artist’s representative exhibitions in recent years, his participation in 2015 in the internationally renowned art program “Times Square Midnight Moment” organized by the Times Square Alliance in New York has won great acclaim. In the framework of this program his works have been projected from all the large screens throughout Times Square at midnight for the entire month of February. Moreover, Rozendaal’s website works are included in the collections of the Whitney Museum and of the Museum of the Image (MOTI) in the Netherlands.