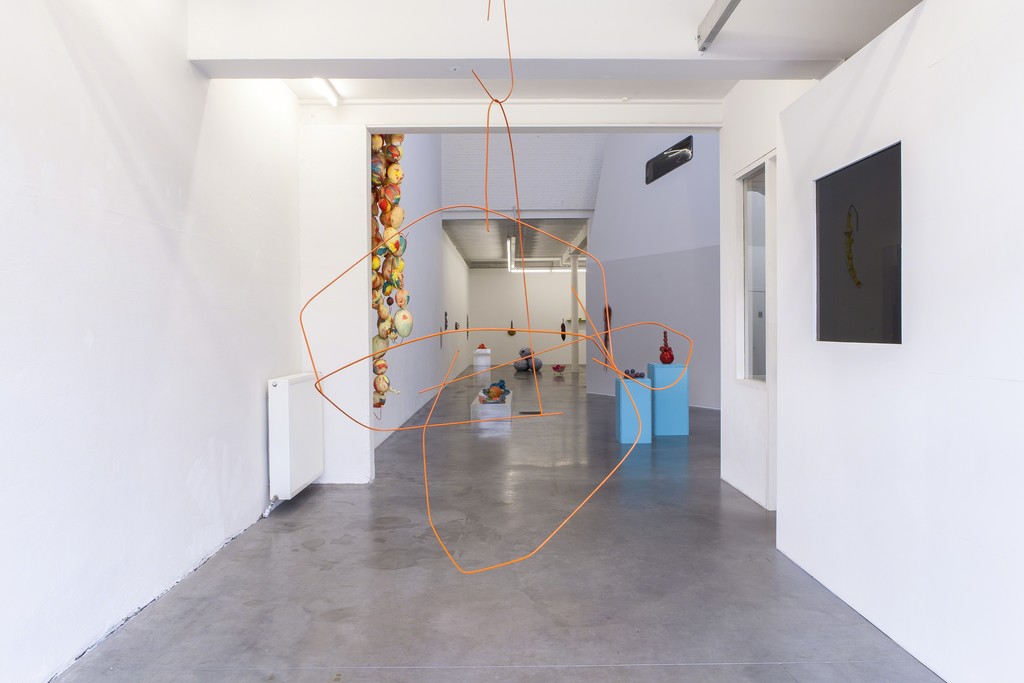 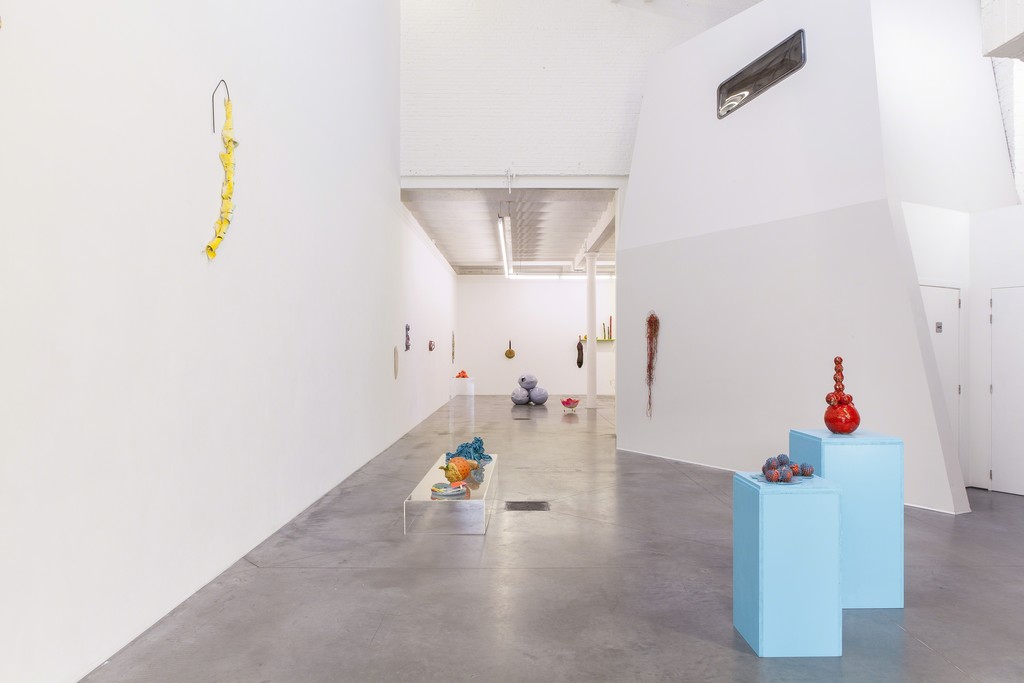 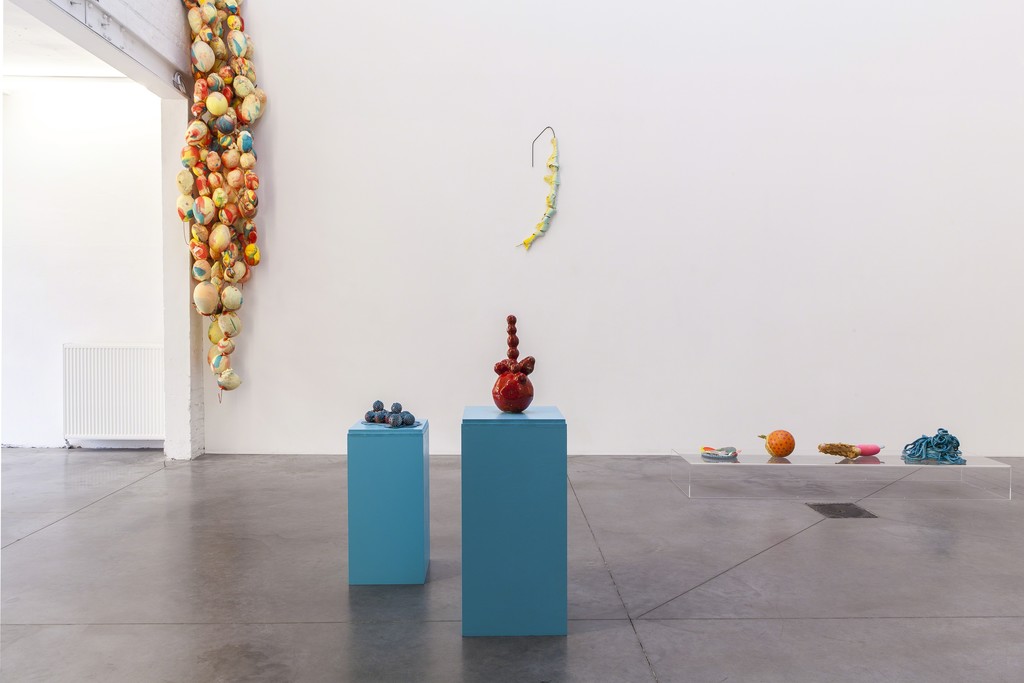 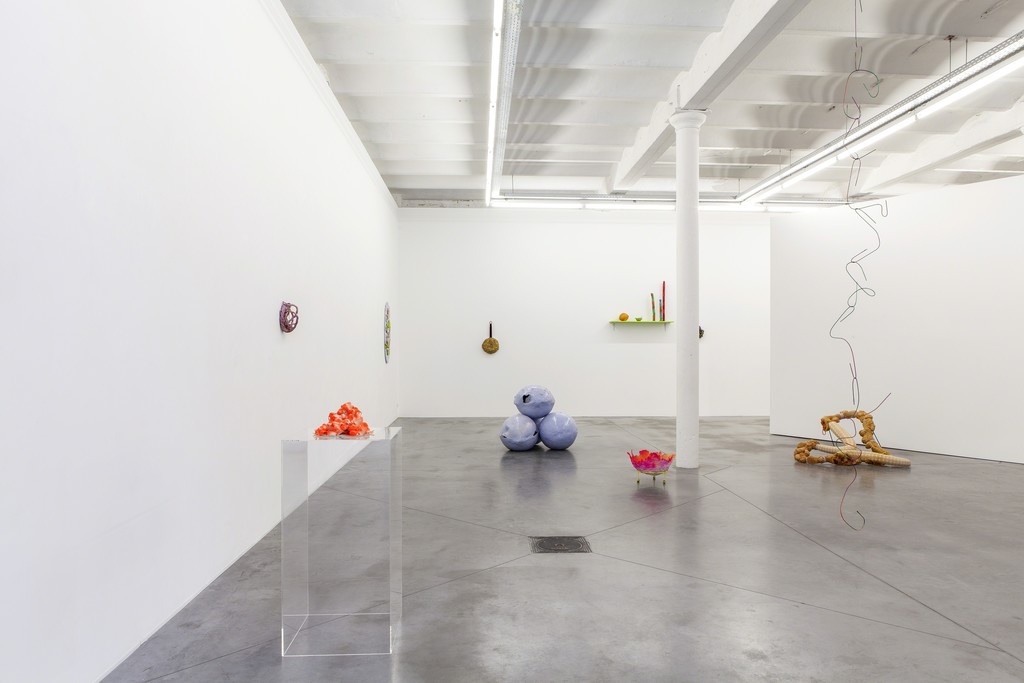 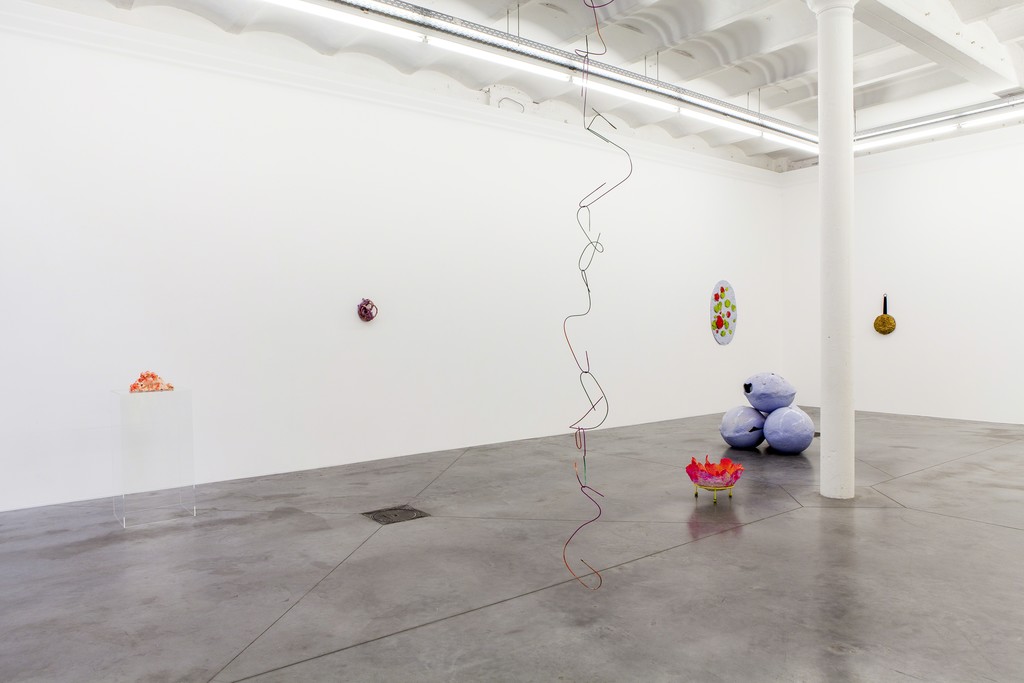 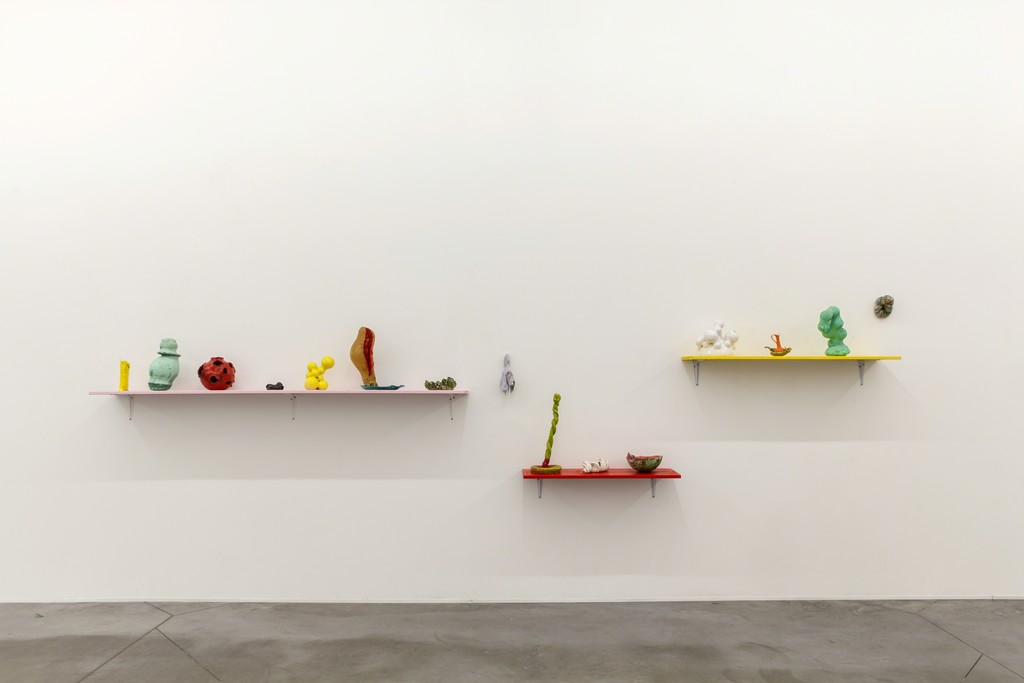 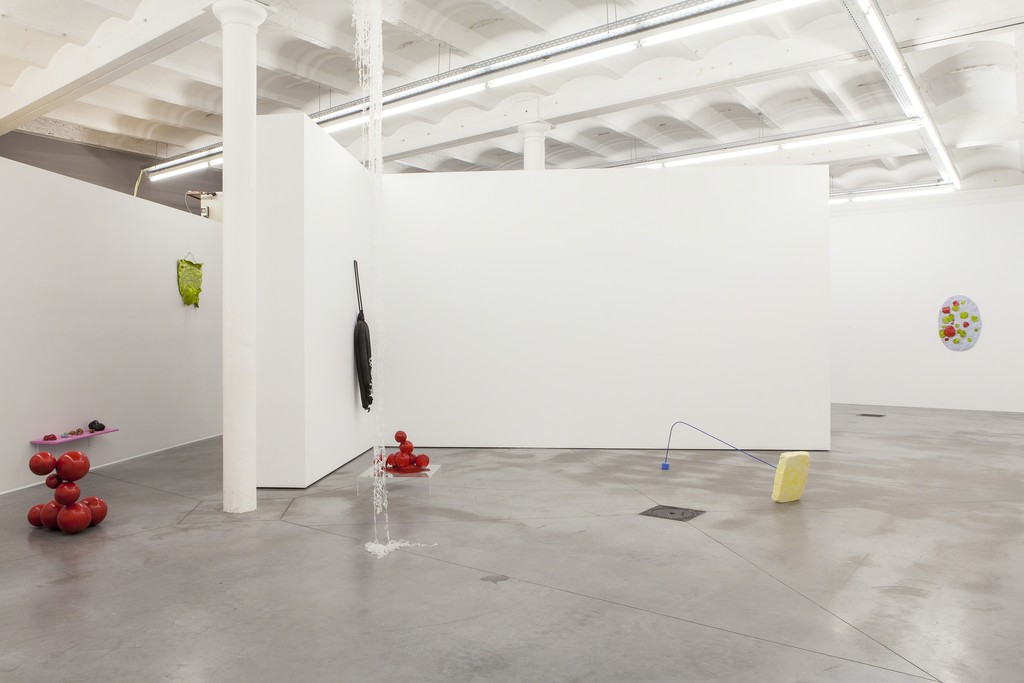 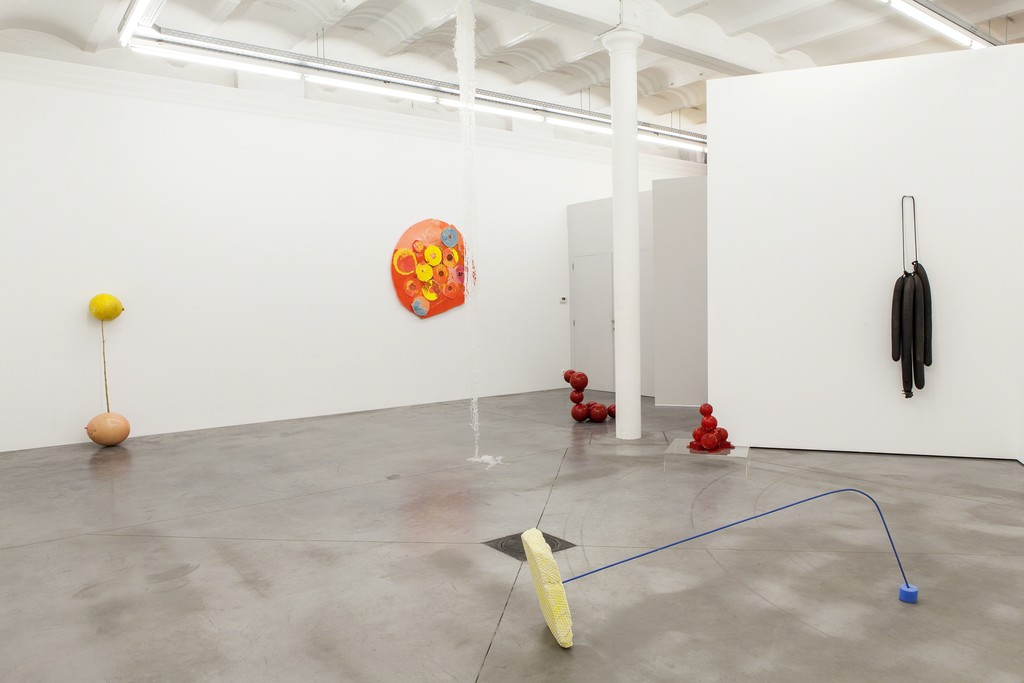 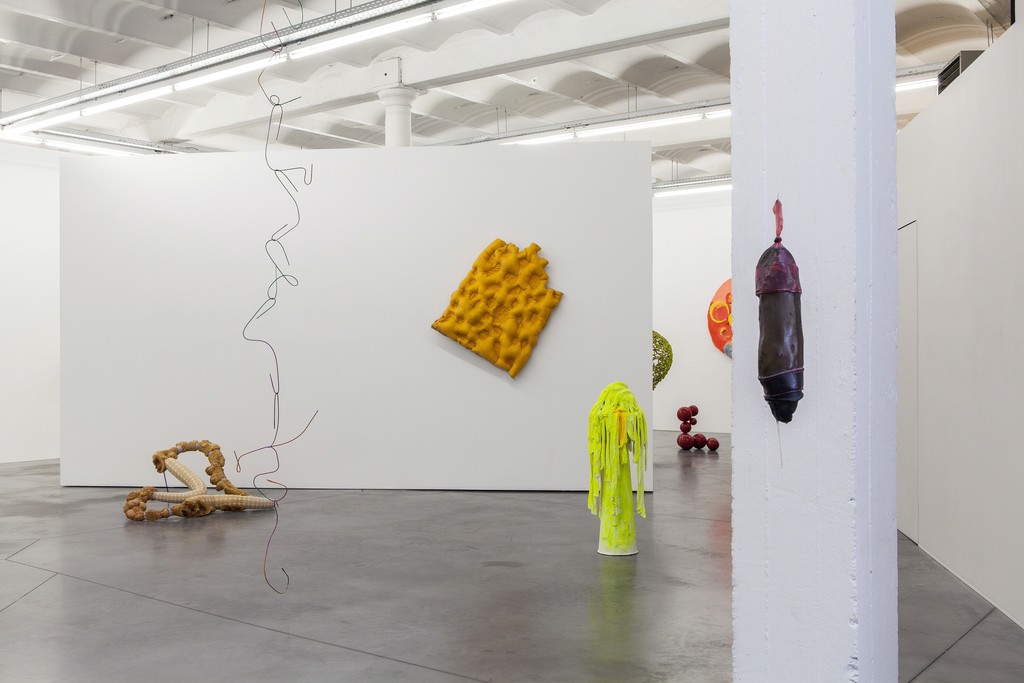 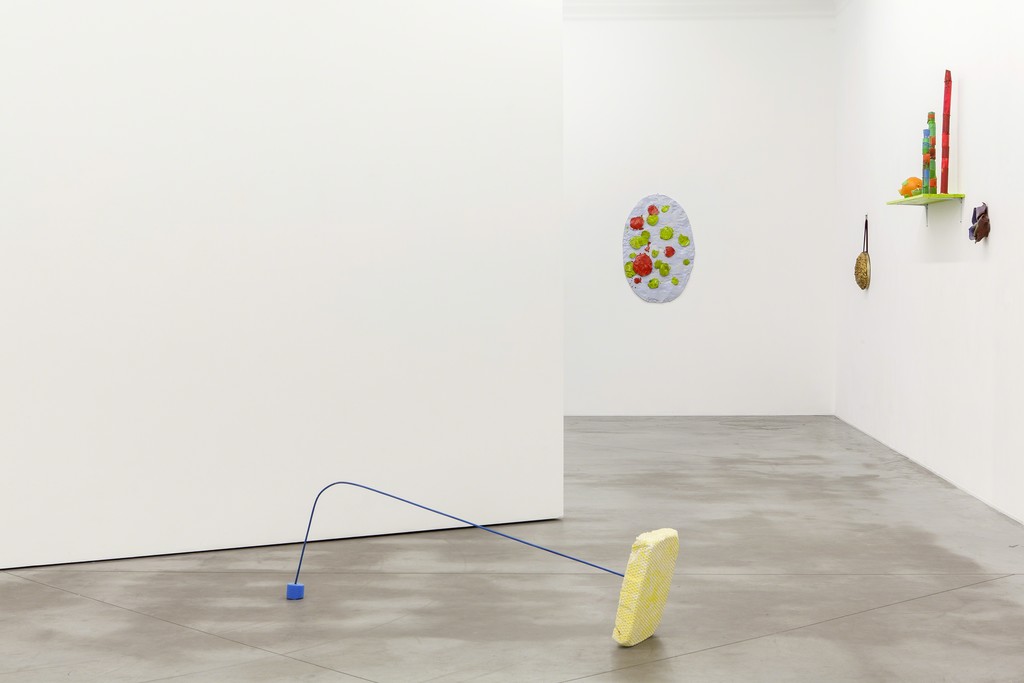 I first met Tamara Van San in 2007 during preparations for an exhibition. I happened to be in the garden of the museum when the artist pulled up in a large van from which she and three men lifted a very heavy polyurethane sculpture, carried it fifty metres and then put it down on the grass. The one-and-a-half-metre- high sculpture represented a cloud but resembled a clenched fist. Both the person and the sculpture radiated a mixture of sensuality and strength. In subsequent years I met and talked to Van San several times, usually with reference to sculptural installations or exhibitions. For instance, I was at the S.M.A.K. in March 2010 when her in situ sculpture ‘The Wandering Tuba Method’ was shown to Panamarenko. He described the work as “not bad” and spent a long time looking at it. Again it was a strange combination of gracefulness and robustness. Elongated, polyurethane shapes covered in pink nylon were wound and knotted around reinforcing rods which were affixed to wall or ceiling just with a few screw eyes. It was a sober and striking, sensitive and poetic piece. I was also very impressed by the solo show at Galerie Tatjana Pieters, now one-and-a-half years ago, where she showed exclusively sculptures made with epoxy and pigment. In recent years her oeuvre has gradually developed by experimenting with a succession of different materials. Having made mostly polyurethane and plaster sculptures for a while, she then concentrated on ceramics for several years. After that she worked with epoxy for a year. For this exhibition she wants to try and bring together in poetic harmony a number of works created in the last ten years. “I have also made several new sculptures using paper and silicones,” she told me recently, “but I don’t know exactly what I’m going to do with them yet. I would love to be able to show that the materials I used are very important, but that what really matter are the forms, their newness and the way they claim a place for themselves and their maker.” And she added laughing: “And for you and the other spectators, of course.” I can’t help it, but I feel great admiration for this wilful woman and her unpredictable, over-the-top sculptures. It never fails to surprise me that they can be light-footed and dark, elegant and hard, poetic and sobering all at the same time... What we seem to experience in this work is an encounter between the sublime and the earthly, which is achieved in seemingly simple, but always unusual forms. The themes are implicit in the way the materials are used. The sculptures appear to comment on what it means to make a sculpture. The world is revealed to us in a new, contemporary manner. Several authors have aptly pointed out that as a child Van San travelled and sailed a lot and that she now regularly goes diving. This work seems to breathe freely, you sense a determination and daring which go beyond the provincial. You feel the opulence of the nature, the architecture, the astronomy. You sense a belief in art as a survival weapon and as a window on a changeable, ever-surprising world. This is magnanimous work, made for people who have both feet firmly on the ground, but are not afraid to dream.

Tamara Van San (BE, 1982) lives and works in Appelterre (BE). She has taken part in various group exhibition at amongst others Dresselhuyspaviljoen, Hilversum (NL), Kunsthal, Rotterdam (NL) Galerie EL, Welle (BE), Netwerk, Aalst (BE), Mu.ZEE, Ostend (BE) and Lokaal01, Breda (NL). Solo exhibition include: ‘We’ve Plumbed This Whole Neighbourhood’ (duo), Lido, St Leonards On Sea (UK), ‘Beautiful Boys’, CC België, Hasselt (BE), ‘The Wandering Tuba Method’, S.M.A.K., Ghent (BE), EKWC, ‘s Hertogenbosch (NL), ‘The Motley Crew’, Middelheimmuseum, Antwerp (BE). In spring 2015 her work will be exhibited at Standpoint, London (UK) in a duo show with Jaqcui Hallum.