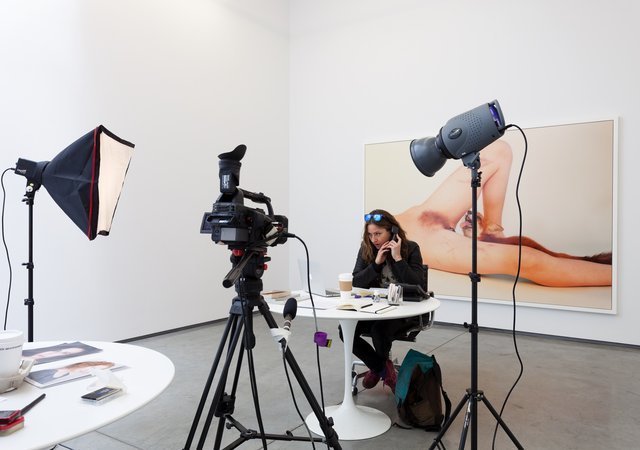 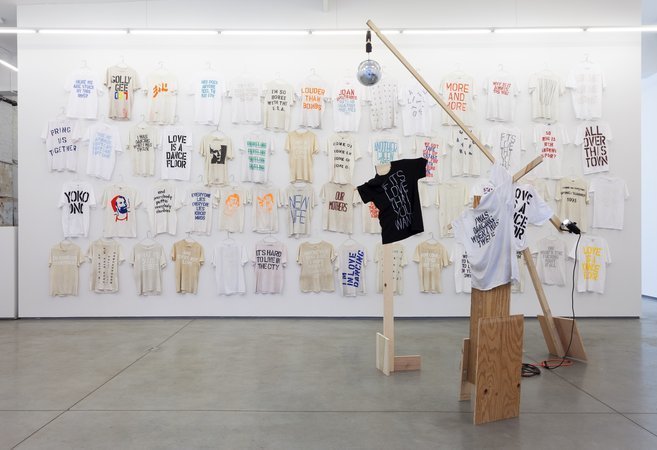 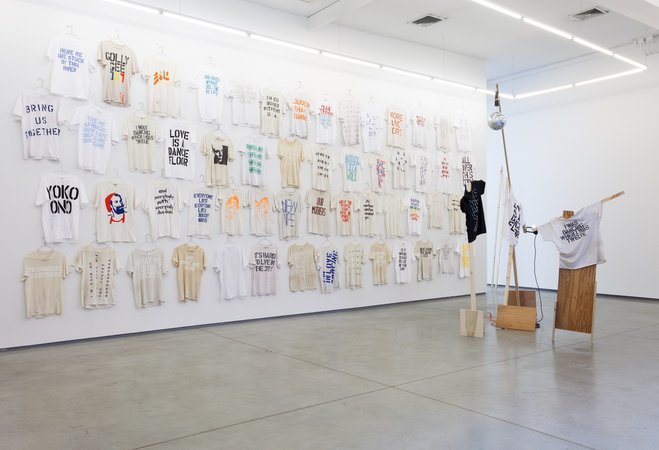 Team (gallery, inc.) is pleased to announce a program of events by Alex Bag and Marc Hundley which will take place during April 2015. Team (gallery, inc.) is located at 47 Wooster Street, between Grand and Broome, on the ground floor. Concurrently, our 83 Grand Street space will house a solo exhibition by Pierre Bismuth.

10 – 12 April: Since the late 90’s, Marc Hundley has been stenciling t-shirts with bits of text, which are most often sampled from his favorite songs. For this multi-faceted performance, Hundley will “set up shop” at the gallery, returning to his archive of stencils to reproduce favorite shirts, which will then be displayed for sale, as well as programming a block of radio to stream on Know Wave (know-wave.com) for the duration of gallery hours on Saturday. Both elements closely relate to the artist’s printmaking practice, which pairs text and imagery appropriated from a variety of sources – Virginia Woolf novels, Smiths lyrics, a Glenn Gould record cover – with dates and locations from his own personal life. These posters celebrate the close connection between art and a life lived, the intractable stamps beloved cultural ephemera leave on our experiences.

24 – 26 April: Alex Bag rose to prominence in the 1990’s with her video work, which was heavily influenced by the simultaneously repulsive and magnetic qualities of television. For this performance, Bag will hold an open audition for a scripted sitcom-style show centering around four archetypal art-world characters. Each prospective actor will perform one of several monologues, chosen on location by the artist – the roles are fluid, not defined by physical characteristics. The premise for the TV program – which Bag will go on to produce as a separate artwork, to be shown at a later date – comes from David Foster Wallace’s novel Infinite Jest, a footnote describing a sitcom designed to stagnate, whose characters cannot advance or develop, trapped in an utterly circular narrative.

Alex Bag has been the subject of solo exhibitions across the United States and Europe, including those at the Whitney Museum in New York; the Migros Museum in Zurich; and the Andy Warhol Museum in Pittsburgh. Her work has been included in group shows at venues such as the Museum of Modern Art, the Tate Gallery, the Centre Georges Pompidou, the Renaissance Society and the Kunsthalle Basel.

Marc Hundley’s work has been exhibited in numerous galleries in the U.S. and abroad. He has been included in shows at Rivington Arms in New York; Cherry and Martin in Los Angeles; White Columns in New York; and Herald St in London. His solos at Team Gallery in 2011 and 2013 were well reviewed, receiving praise in Artforum, New York Magazine, TimeOut New York and Interview.