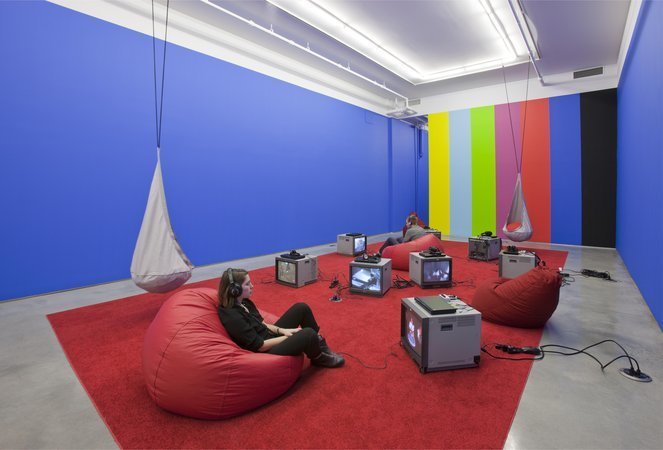 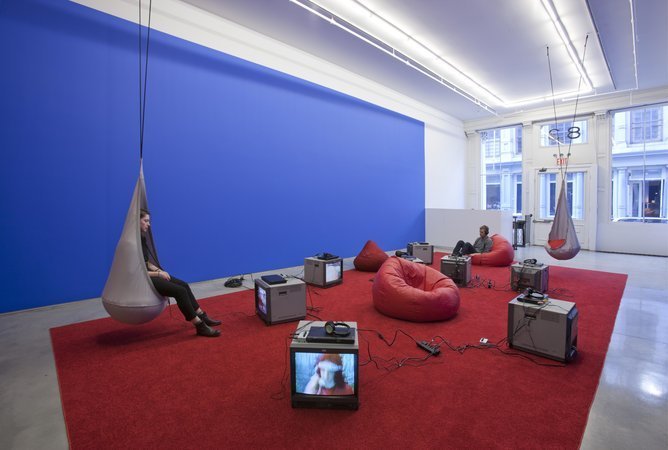 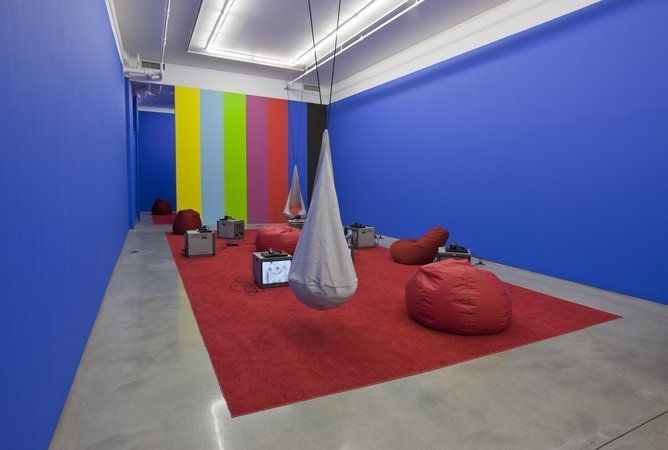 Team is pleased to present a collaborative installation by New York-based artists Alex Bag and Patterson Beckwith. Entitled Cash from Chaos / Unicorns & Rainbows, the exhibition will run from March 29th through April 28th, 2012. Team Gallery is located at 83 Grand Street, between Wooster and Greene, on the ground floor. Concurrently, our 47 Wooster Street space will house a one-person exhibition of new paintings by Stanley Whitney.

The work in Cash From Chaos / Unicorns & Rainbows consists of footage from Alex Bag and Patterson Beckwith’s legendary late-night public access programs, from which the exhibition takes its title. The shows were twenty-nine-minute long weekly cablecasts, aired on Channel 34 at 2:30 a.m. on Wedensday nights between 1994 and 1997.

The total running length of the project, some 60 hours in duration, has been edited down by Bag and Beckwith to a slighly more manageable eight hours, stored on hour long DVDs fed onto eight dedicated monitors. These Sony cubes are arranged somehwat haphazardly in a kitschy communal environment cobbled together from materials bought at various home decoration centers. Visitors can lounge on bean-bag chairs, swing from ceiling-mounted hammocks, or recline on shag carpeting, while choosing which monitor to watch – a white-cube approximation of channel surfing in the mid-90s.

A great deal of the material on view is determined by the medium, both its constraints and allowances. The artists filled their timeslots with prank calls, surreal, decontextualized clips from other programs, and cock-eyed tours of stranger parts of New York City. Television here is both the subject and medium: while it might be an outrageous sendup of broadcast media, it is itself a TV show, and a highly entertaining one at that. The viewer’s pleasure watching the work is a constant reminder of television’s sinister seductive quality.

Each episode of Cash from Chaos opens with Bag and Beckwith destroying the previous week’s program, housed temporarily on the predigital age’s VHS tape. The artists burned, melted, and smashed tapes — once even taking a cassette to a shooting range for use in target practice. This destructive act epitomizes the artists’ fast-paced, in-the-moment approach to the shows, which demanded that they provide twenty-nine minutes worth of new material each week. This time constraint forced them to act on quick impulses in developing each episode’s idea, rarely allowing the luxury of thorough consideration. The work is volatile and highly personal, and showcases the raw, unfiltered conceptual creativity of two young people.

The show also acts as a document of a specific New York City, one both individual and totally foreign to the two artists. Some episodes follow them meeting with artists and friends or visiting galleries, giving the viewer a sense of Bag and Beckwith’s milieu. In others, they become tourists in their own city, using television as an excuse and enabler for activities they either would or could not otherwise take part in, such as a helicopter ride over Manhattan or a visit to a sheep farm. Their roles as “television producers” allowed them myriad opportunities, and always free-of-charge. As Bag explained in a 1996 interview, “people take you very seriously when you tell them that they or their business can be on TV.”

Cash from Chaos and Unicorns & Rainbows turn TV against itself, punk-rock satires of the most pervasive form of mass media. The artists, however, recognize their own complicity in both its consumption and production. In one segment, titled Cable Theft Today, Beckwith explains in detail how to steal cable, conceding the omnipresence and even necessity of television in contemporary American culture, while at the same time subverting the corporations and establishments responsible for it. At another point in the show, the two artists visit a fortune-teller, who gives a tarot reading of the show’s future: “I can feel that you guys are into questioning authority,” the psychic deftly intuits.

Alex Bag has been the subject of solo exhibitions across the United States and Europe, including those at the Whitney Museum in New York; the Migros Museum in Zurich; and the Andy Warhol Museum in Pittsburgh. Her work has been included in group shows at venues such as New York’s Museum of Modern Art, at the Tate Gallery, the Centre Georges Pompidou, the Renaissance Society, and the Kunsthalle Basel. Patterson Beckwith was a founding member of the NY collaborative Art Club 2000, whose work was represented by American Fine Arts Company. As a solo artist, Beckwith’s work has been shown extensively across the U.S. and in Europe.