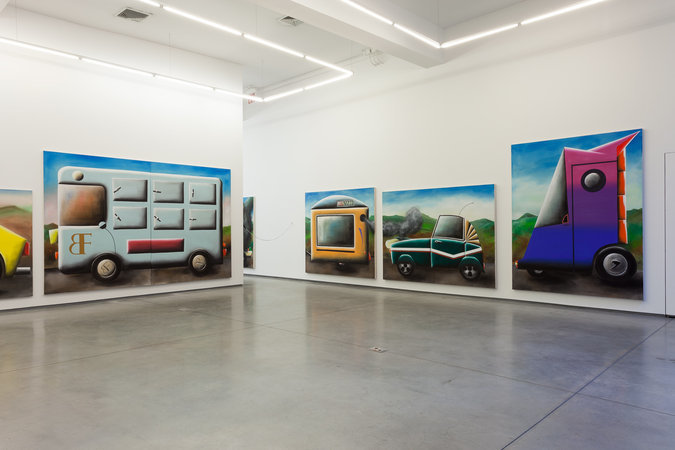 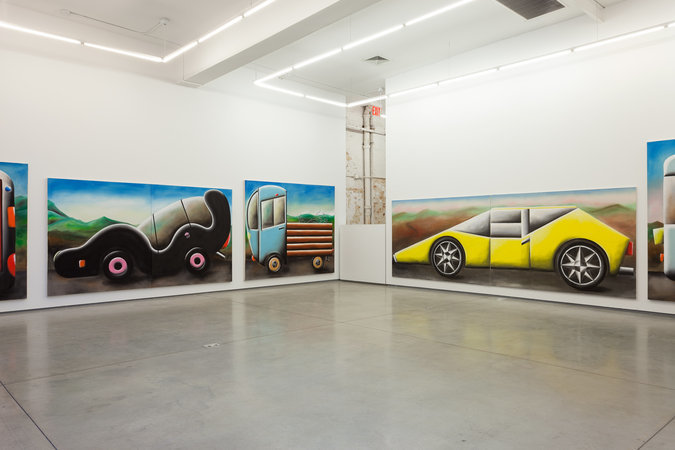 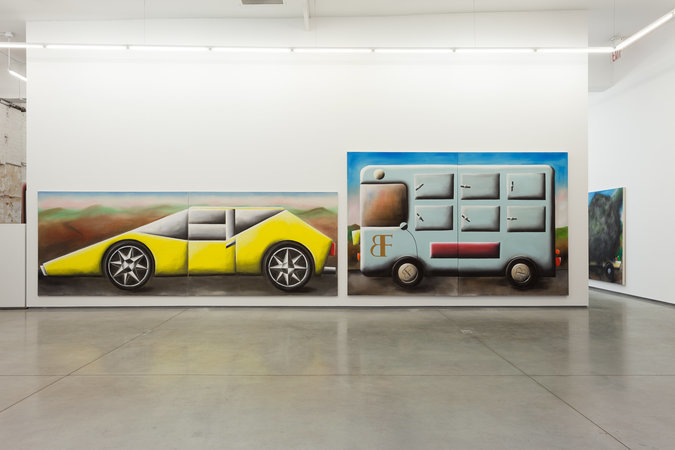 Team (gallery, inc.) is pleased to announce Traffic Jam, a show of new work by Cologne-based artist Andreas Schulze. The exhibition will run from 23 November through 21 December 2014. Team is located at 47 Wooster Street, between Broome and Grand. Concurrently, our 83 Grand Street space will host an exhibition of new photographs by New York-based artist Sam Samore.

For his third exhibition with the gallery, Andreas Schulze has turned his focus to a single modern design typology: the automobile. On each of the gallery’s three walls hangs a series of starkly colored, larger-than-life paintings of cars. Schulze, who is perhaps best known for immersive, spatially transformative installations, both acknowledges and destabilizes our existing pictorial understandings of quotidian objects. These swollen, cartoonish renderings of vehicles – immediately discernable as such – pose as light and familiar members of our visual culture. The works’ apparent playfulness, however, is compromised by a palpable melancholy, and, subsequently, undermined altogether by their Verfremdungseffekt.

In the way that a child’s drawing posits a car as the mere sum of its visible parts – a misshapen assemblage of windshields, wheels and windows – so do these works evince little concern for actual automotive design. The paintings’ essential wrongness, paired with their grandiose scale and impassive presentation, effects a Brechtian alienation. These are not depictions of automobiles; rather, they are pictures of pictures, explorations of the rough, indelible images that fundamentally inform our perception of these highly aestheticized machines.

The artist’s painterly act, like functional design, relies on cultural pre-conceptions and expectations. Imagination, invention and beauty occur within a semi-rigid template – a car painting must contain certain elements in order to be recognizable as such. Within this framework, these works accomplish the extraordinary: the self-imposed limitations serve not as a means to snide self-commentary, but as a gateway to an uncompromised artistic purity.

Emerging in the fertile Cologne scene of the 1980s, Schulze became associated with a group of young painters of the Mülheimer Freiheit, the name of a shared studio in which they exhibited their work. This group included the painters Hans Peter Adamski, Peter Bömmels, George Condo, Walter Dahn, Jiri Georg Dokoupil, Gerard Kever and Gerhard Naschberger. Though working closely and frequently collaborating with these peers, Schulze has developed an anomalous and haunting painting practice whose influence is becoming more and more widely regarded.

Schulze was born in Hannover in 1955 and has been exhibiting his work since 1981 – his longstanding relationship with gallerist Monika Sprüth beginning in 1983. Schulze’s work has been exhibited at museums internationally including the Museum of Modern Art in New York, the Tate Museum in London, the Kölnischer Kunstverein, the Solomon R. Guggenheim Museum, Kunstaele in Berlin and at the Kunstverein and the Sammlung Falckenberg, both in Hamburg. A retrospective is currently touring three venues: Villa Merkel in Neckel, The Shirn Kunsthalle in Frankfurt, both in Germany, and the Kunstmuseum Sankt Gallen in Switzerland.