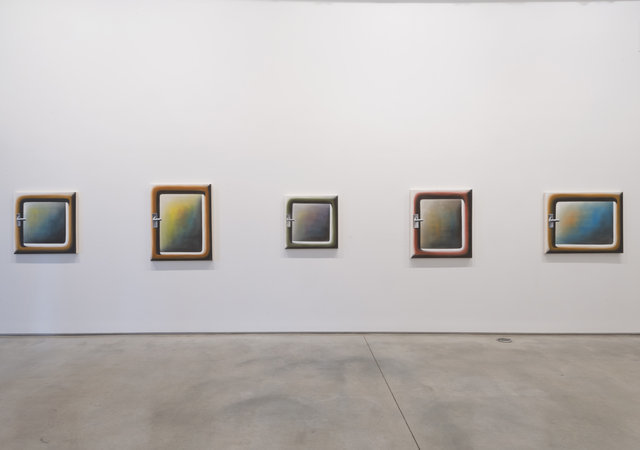 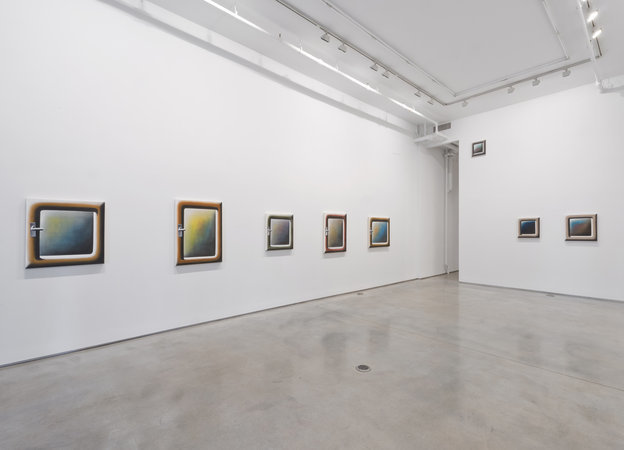 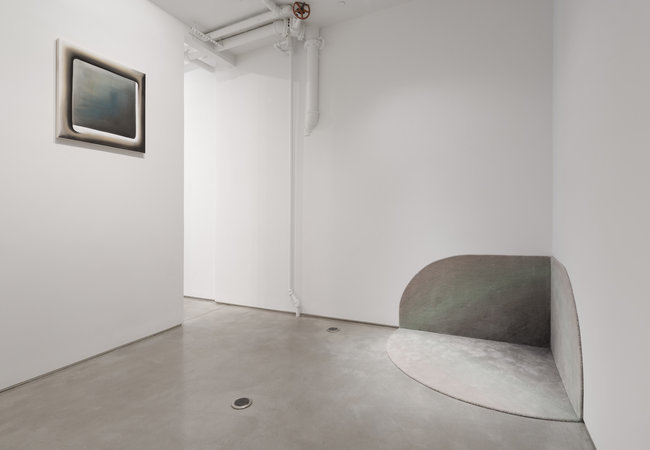 Andreas Schulze’s practice has most frequently resulted in immersive installations that simulate domestic settings, such as that mounted at Team’s Wooster Street space in April of 2012. Schulze appropriates familiar modern design typologies and manipulates their aesthetics into bulbous cartoonish forms, creating environments that are simultaneously familiar, uncannily bizarre and somewhat ominous. For this exhibition, Schulze has created a new cycle of paintings, all representations of windows, which play with art historical attitudes towards the authority of perception. They will be presented here within a standardized white-cube setting, thereby undercutting their illusionistic tendencies.

Particularly in the Baroque era, painters tested their mastery by creating trompe l’oeil tableaux, literally fooling their viewers into believing that the painting in front of them was a real, tangible mise en scene. A genre of window paintings developed from this tradition, where the frame of the painting became analogous to the frame of a window; the actual painting was supposed to represent a vista and create the same sensation as looking out of an actual window. Schulze carries forth with this tradition, reducing it to its formal essentials: frame, rendered in his typical bulbous style, and view, completely sfumato and flattened. His windows complexify the tradition of the landscape in painting history by introducing a more contemporary notion – the void. Drained of scenery, these muted vistas subvert our expectations and create, in Schulze’s own words, “a feeling of yearning by means of perspective.”

Five of the paintings feature handles on the frame of the window, as if to invite the viewer to open them. The two large-scale paintings in this cycle deviate from the rest and give way to views of ambiguous spaces. Through one set of windows the viewer sees an interior courtyard, while through the other, one sees simplistically rendered vines climbing the façade of the building from which the viewer is “looking.” The imagery in these paintings is opaque enough that, while they establish a plausible setting (perhaps a country villa), they resist the creation of a narrative. In this sense, these paintings reveal a kinship with the landscapes of de Chirico and Magritte; they are barren and seem to point to an underlying melancholic psychology, as well as a metaphysical sense of dislocation between past and present. Alarmingly sharp contrasts between light and shadow create an aura of poignant yet foreboding mystery in an otherwise blank scene. To gaze into a Schulze Window is to gaze into the joyously inscrutable.

Schulze destabilizes our intimacy with familiar, mundane subjects to question not only our relationships with these objects but the very nature of seeing. Emerging in the fertile Köln scene of the 1980s, during a renaissance of painting, Schulze became associated with a group of young painters of the Mülheimer Freiheit, the name of a shared studio in which they exhibited their work. This group included the painters Hans Peter Adamski, Peter Bömmels, George Condo, Walter Dahn, Jiri Georg Dokoupil, Gerard Kever and Gerhard Naschberger. Though working closely and frequently collaborating with these peers, Schulze has developed an anomalous and haunting painting practice whose influence is more and more widely regarded.

Schulze was born in Hannover in 1955 and has been exhibiting his work since 1981, his longstanding relationship with gallerist Monika Sprüth beginning in 1983. Schulze’s work has been exhibited at museums internationally including the Museum of Modern Art in New York, the Tate Museum in London, the Kölnischer Kunstverein, the Solomon R. Guggenheim Museum, Kunstaele in Berlin and at the Kunstverein and the Sammlung Falckenberg, both in Hamburg.