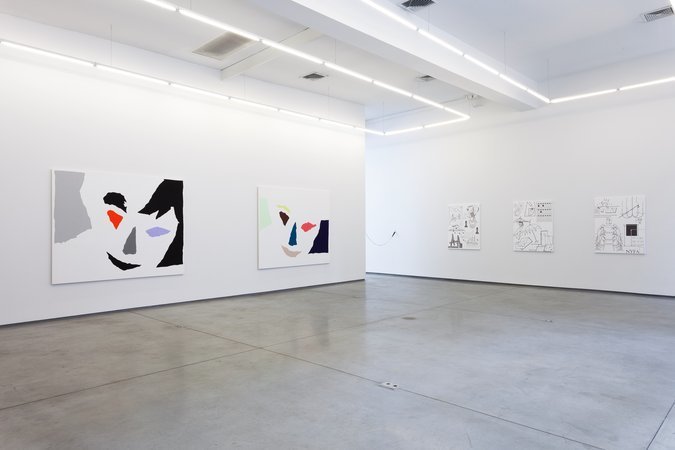 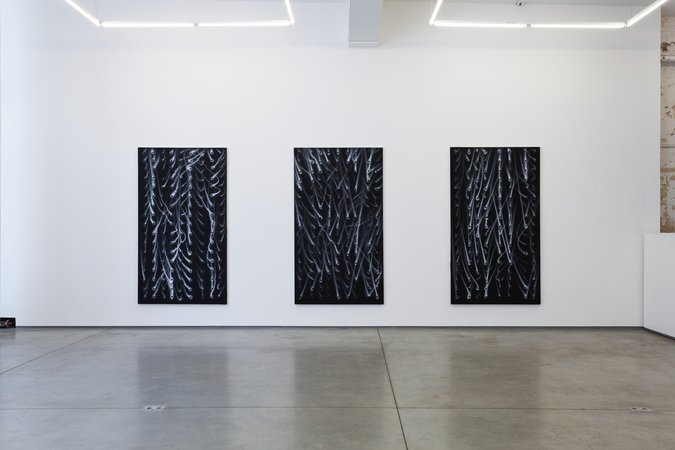 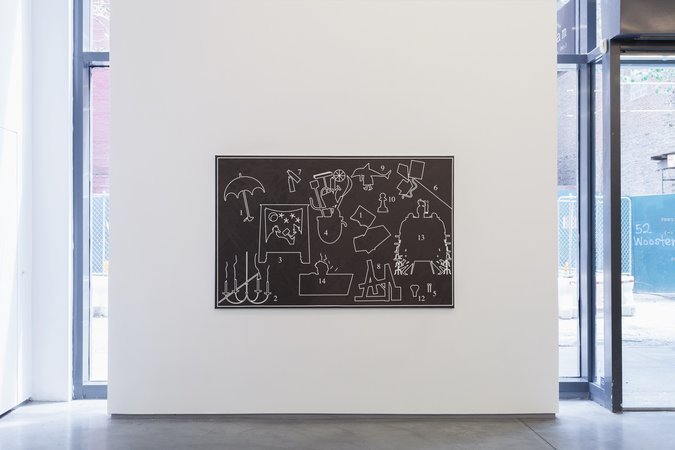 Team (gallery, inc.) is pleased to announce a group show of work by American painters Andrew Gbur, Jaya Howey and David Ratcliff. The exhibition will run from 03 May through 07 June 2015. Team is located at 47 Wooster, between Grand and Broome. Concurrently, our 83 Grand Street space will house a solo show by Tabor Robak.

The paintings of Andrew Gbur, Jaya Howey and David Ratcliff find common ground in their simultaneous use and distrust of contemporary visual signage; each artist exposes the falseness of his own vocabulary of symbols, showing them to be anemic, fleeting hieroglyphs. Seriality is crucial to the exhibition: the bodies of work are all characterized by the use of extreme limitation and redundancy of form to engage in subtle psychological violence. By accosting us repeatedly with emptiness, they generate an insidious Weltschmerz, imbuing the abstruse but unwelcome knowledge of diffuse cliché and contrivance.

Andrew Gbur’s paintings depict, in starkly abridged terms, the human face. The works, which are rendered in a few soft, amiably opaque colors, find some visual precedent in cartoon smiley faces. Despite this veneer of pleasantness, their effect is unnerving – the grins are inexorably lascivious, unexplainably lewd. The clown-like formations, while recognizable, are deeply and willfully non-mimetic, non-representational; they illuminate the symbolic artifice of their ostensible subject matter, forcing us to question why they bothered us in the first place.

Jaya Howey’s pictogramatic paintings are full of straight, perfectly manicured lines, circles and half-circles, drawing attention to the drafting tools such shapes necessitate. The works take as their subject the chaos of human emotion, and the perfunctory and profoundly inadequate ways in which we casually attempt to communicate those mosaic mental states; the likes of signage, mechanical drawing, text message bubbles, cartoon animals and other such caricatures of feeling form the basis for the artist’s vocabulary. The works, and the symbols they employ, strike a dissonant chord, their austerity accentuating the gulf between immaculate, simple surface and the labyrinthine underlying network of confusion, agony and passion.

Works by David Ratcliff, which continue the artist’s always-appropriative practice of stenciling and spray-painting found and collaged imagery onto canvas, consist of evenly gridded five-point stars, surrounded by shadow contrails. The deceptively simple gesture exploits viewers’ nebulae of associations – specifically, the smoke-trailed shapes evoke the violence of American patriotism, the countless acts of war committed under the banner of the Stars and Stripes. A typically innocuous motif, frequently dispensed as facile encouragement, in Ratcliff’s hands suggests apocalyptic dread. An almost gleeful nihilism turns childlike adornment to a symbol for mass murder, cultural rot and the temporal decay of pictorial language.

Pennsylvania-based Andrew Gbur was the subject of a recent solo exhibition at our Bungalow space in Venice, California, as well as group show appearances at MoMA PS1, New York; and the Zabludowicz Collection, London. He received his MFA in painting from Yale. Jaya Howey, residing in Brooklyn, has held solo exhibitions at galleries including Bureau, New York; Taxter and Spengemann, New York; and Marginal Utility, Philadelphia. He graduated from Columbia’s MFA program. David Ratcliff, who currently lives in Iowa, has mounted solo shows at Maureen Paley, London; Tomio Koyama Gallery, Toyko; and Galerie Rodolphe Janssen, Brussels. His work has been featured in shows at MoMA PS1, New York; The Turin Triennial; and Art Center College of Design, Pasadena. He has been represented by Team since 2005, and has had five solo shows with the gallery.