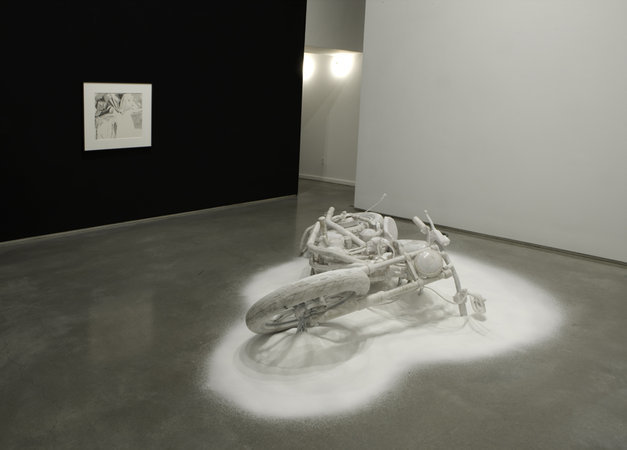 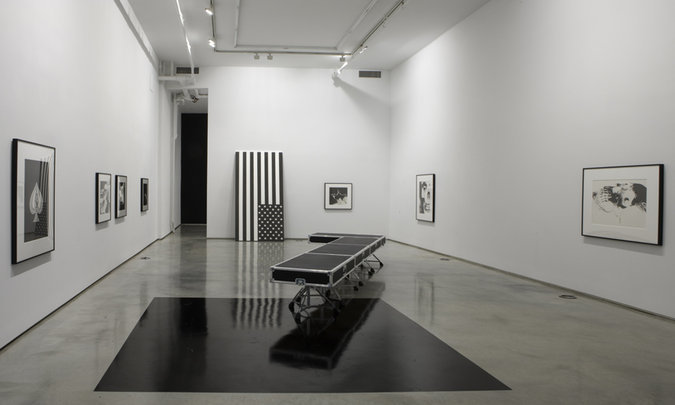 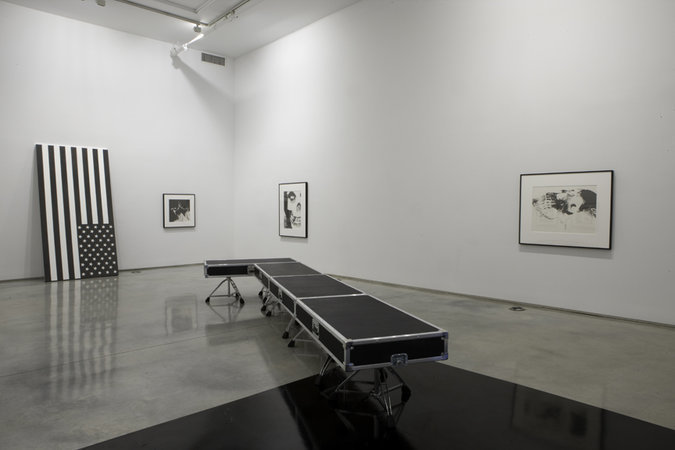 Team is pleased to present an exhibition of new drawings, alongside one sculpture, by the New York-based Banks Violette. The exhibition will run from the 7th of May through the 20th of June 2009. Team Gallery is located at 83 Grand Street, between Wooster and Greene, on the ground floor.

Sculptor Banks Violette has always referred to his drawings as “film cells from the world’s slowest movie.” As with the cinema, meaning does not adhere solely to individual images but rather to their accretion over time. Viewed singly, these exquisitely rendered pictures seem miraculous transfigurations of realism, but when seen in groups they form a continuous landscape of memory, regret and melancholy.

The iconography on which Violette built this show includes the ace of spades, a grinning skull from a B-movie campaign, a famous Vietnam-era image of human suffering, a roadside death shrine, discarded party balloons, a theater spotlight, and the Crimson Ghost from the 1940s Republic film serial. When taken together, the drawings touch on themes of redemption and faith, death and transformation.

Central to the exhibition is a portrait of Bela Lugosi as Jesus Christ. Before coming to the U.S. to make his name as the cinema's most famous vampire, the Hungarian actor made his living playing the lead in passion plays. Violette’s Dracula/Christ manages to take the perceived goodness and suffering of the Jesus figure and "confuse" them with the monstrous evil that Lugosi would so successfully embody as the Count. Lugosi's well-documented drug addiction and late-period decline into poverty and obscurity are also clearly a part of what attracts Violette to this image. A seemingly benign religious portrait, in Violette’s hands, becomes a container for Hollywood’s lies, America’s morbid fascination with disposable celebrity, and our constant need to construct mythologies of total success and absolute failure.

Violette’s drawings are also, at their very core, terribly American works of art, a fact foregrounded here by an eight by four foot drawing of the U.S. flag rendered in black and white and mounted onto a slab of aluminum which is then simply propped against the wall. This monolith helps underline the physicality of Violette’s drawings – images struggle to the surface from a dense mass of graphite applied sometimes laboriously and vigorously; sometimes with a gentle and persuasive sensitivity.

The show’s lone sculpture is a motorcycle that has been cast entirely in resin and salt. The stark white presence will be paired with a drawing of a shrine left at a scene where someone had died in a motorcycle crash. The way in which the image has been rendered makes the drawing seem to appear and disappear as one looks at it. A very strange sense pervades that you are both looking at something specific and looking at nothing at all.

Violette’s drawings are always coming together and falling apart in the eye of the spectator. Soft edges, hardened into image through cognition, vanish into nothingness and slip from legibility. Violette’s work, sometimes crushingly monumental and brutally hard-edged, always so present, is actually, delicately, about the “after” of things. It is not the photo-realistic clarity of the drawings that gives them their power but rather the way in which they remain vague and unreal impressions with a ghost-like presence.

The commemorative and the evidentiary, posed as poetry and prose, have remained central in Violette’s work. The contradictory and the elusive are the continent of his travels. If one looks for the development in Violette’s work one finds a movement towards abstraction: from his earlier works, which sprang from specific social, usually criminal, phenomenon to his most recent investigations of staging and the spectacular as vessels of oblivion.

Violette has been exhibiting his work for the past ten years. This is his fifth solo show at Team. His work has been shown at, and collected by, major museums around the world, and he has been the subject of numerous articles. Recent solos include the Kunsthalle in Vienna; the Modern Art Museum in Forth Worth, Texas; the Kunsthalle in Bergen, Norway; and the Whitney Museum of American Art. He’s also participated in group shows at The Solomon R. Guggenheim Museum; the Migros Museum fur Gegenwartskunst; the Andy Warhol Museum; the Museum of Modern Art; the Frankfurter Kunstverein; the Palais de Tokyo; the Royal Academy; the Kunstmuseum St. Gallen; PS1; the Museum Boijmans van Beuningen, among others.