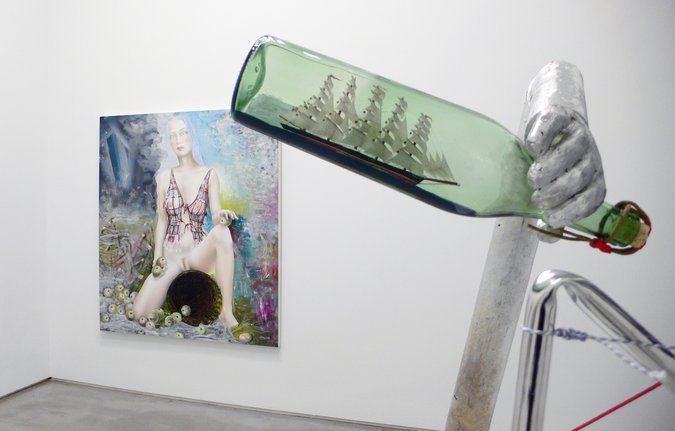 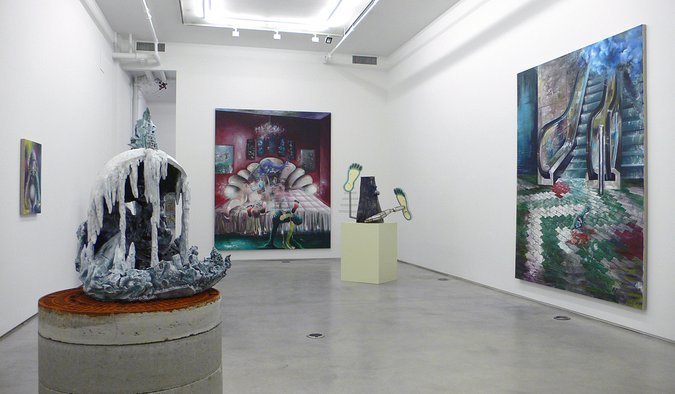 Team Gallery is pleased to present an exhibition of new work by the Berlin-based artist Bernhard Martin. The exhibition will run from the 21st of February through the 29th of March 2008. Team Gallery is located at 83 Grand Street, cross streets Wooster and Greene, on the ground floor.

Bernhard Martin’s exhibition, made up of paintings, sculptures and drawings, deliberately undermines — some might even say affronts — a viewer’s conception of good taste. His visual content toys with artistic convention and legitimacy, questioning whether that which Martin so lovingly renders is worthy of depiction in the first place. His kaleidoscopic visions are referentially surreal and pop — his plastic patch-working of imagery creating a hybrid of person, place, thing. Martin builds a new composite whole, but traces of the individual elements remain distinct and unambiguous — a leg here, a banister there. Spaces overlap and dissolve, sometimes fragmenting into pure abstraction.

Conceptually, this pictorial variation goes hand in hand with the diversity of technical and stylistic elements, chosen for reasons that do not always announce themselves. Attempts to make sense and order of these strange amalgamated visions are thwarted by an apparent crass and transgressive randomness. In fact, what we are seeing is a very deliberately orchestrated fusion of fantasy and reality. Within this tremulous collision, cultural hierarchies have been flattened. Any differentiation between high-brow and low is null and void, as sex and play, and fear and nostalgia, cohabitate. The specific choices that are responsible for such an impression - this chaotic web of references and styles - undermine the notion that an artist’s gesture has any fixed or inherent meaning.

The question becomes not what exactly are we looking at, but rather, why are we looking? What cause does Martin have to conjure up these images? The exhibition’s title, loosely translated into English as a “failure in prediction” clearly points to the fallibility of the artist as visionary. Martin has replaced lofty, poetic visions with hallucinatory ones that somehow fluctuate between the horror of meaninglessness and the comfort of the fathomable.

Martin’s work has been the subject of monographic exhibitions at the Museum Fridericianum in Kassel, at the Villa Arson in Nice, at the MAMCO in Geneva, and at New York’s PS1. He has had solo gallery shows in such cities as London, Paris, Salzburg, Barcelona, Athens and Zurich and has had 14 one-person exhibitions in his native Germany. It is Martin’s first show at Team.