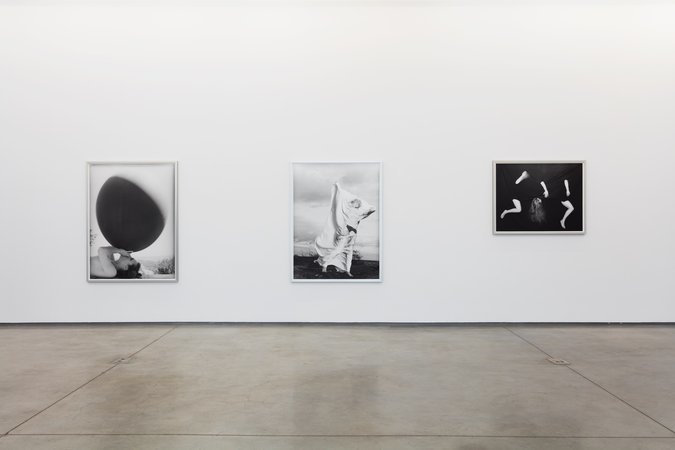 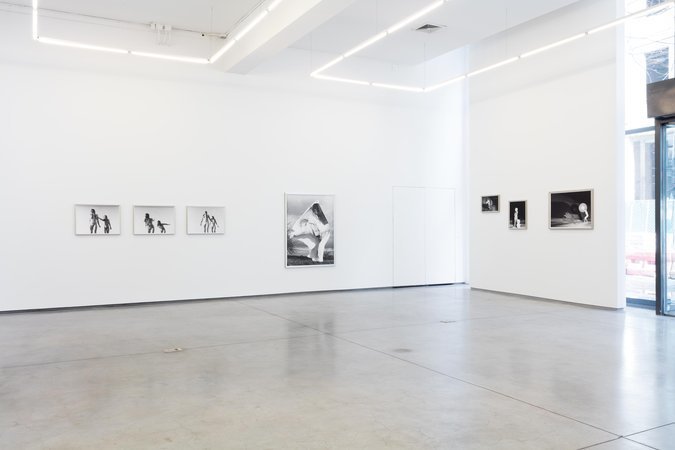 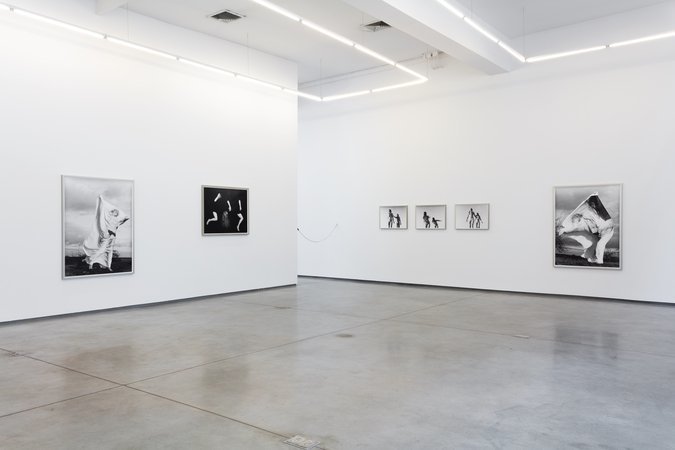 Carina Brandes’ black and white photographs, which depict hypnogogic scenes of play, are the shadowy phantoms of their referent reality. Without the use of explicitly fantastical elements, she conceives and realizes a self-contained, subjective world; the camera serves the artist as a tool for invention and projection, rather than objective documentation. These images isolate ephemeral moments from insoluble, Delphic rituals: nude women (most often the artist herself) perform choreographed actions in otherwise unoccupied nature. The medium of the still image, and these pictures’ arcane but legible contents, engenders an unsettlingly incomplete narrativity: the artist invites an inherently futile hermeneutic investigation, articulating a question but permanently delaying its answer. By presenting an enigma without a solution, she places the viewer in the uneasy binary position of narrator and audience.

The photos draw attention to their own artifice, shirking the conception of representational photography as a mimetic medium. Brandes gives significant weight to her photos’ physicality, their object-status – meticulously hand-producing her images, choosing specific and unusual frames, and tightly regulating their presentation. Her delicate treatment of black and white reduces photography to its constituent elements of light, shadow and contrast, foregrounding its mechanical contrivance, contending that photography, like language, is a flawed semantic medium characterized by the impassable chasm between the signified and its signifier.

Brandes is present twofold in her photos, both as subject and artist, watcher and watched. Neither position is prioritized; on the contrary, each exists as the refracted shadow of the other, each crucial to its reflection’s formation. The works controvert the notion of the self as a distinct entity, instead positing the individual as a swirling set of associations, an ephemeral conglomeration of ever-changing images and mutating perceptions. The motifs of masking, shrouding, mimicking and repetition appear throughout the oeuvre: in one image, a figure wears a crude ghost costume, and stands alongside a supine dog wearing the same. In another photo, she appears in tandem with an only barely distinguishable second figure, also in the nude, and of the same approximate age and build, standing behind her, positioned identically, a corporeal shadow.

While the photographs are defined in part by their obscurity, they are nonetheless symbolically legible, their imagery often resonating with Classical mythology. A photo of a woman carrying a huge, mysterious orb recalls both Atlas and Sisyphus; several others variously depict nude female forms on a beach, bleak recapitulations of the birth of Venus. The evocation of ancient narratives is never direct, and thus ambiguously intentional, casting the viewer as an active participant in her unique visual storytelling. They are pure mise-en-scène, signification without narration, complete in their impenetrable isolation as still images.

Brandes has been the subject of monographic exhibitions both in the United States and Europe. This is her second solo show with Team.