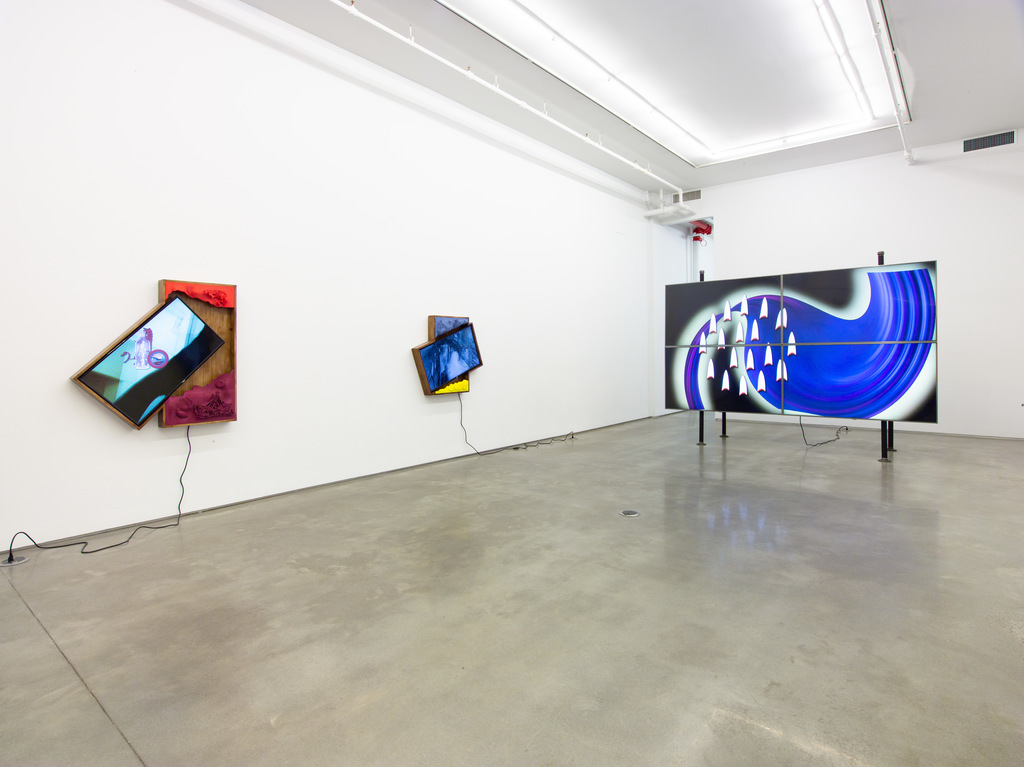 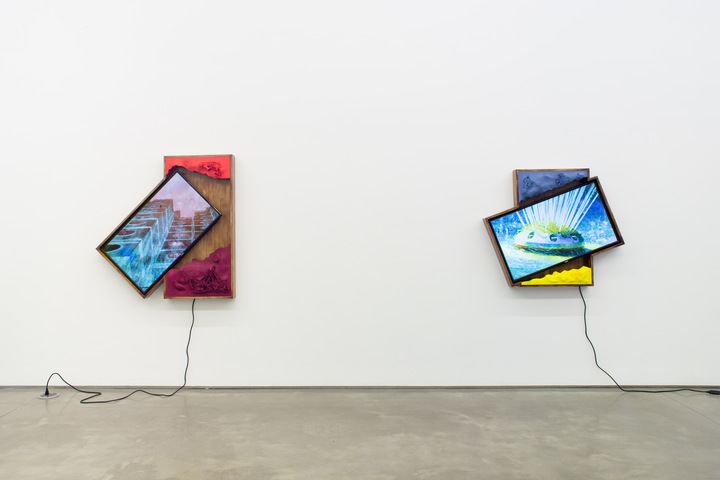 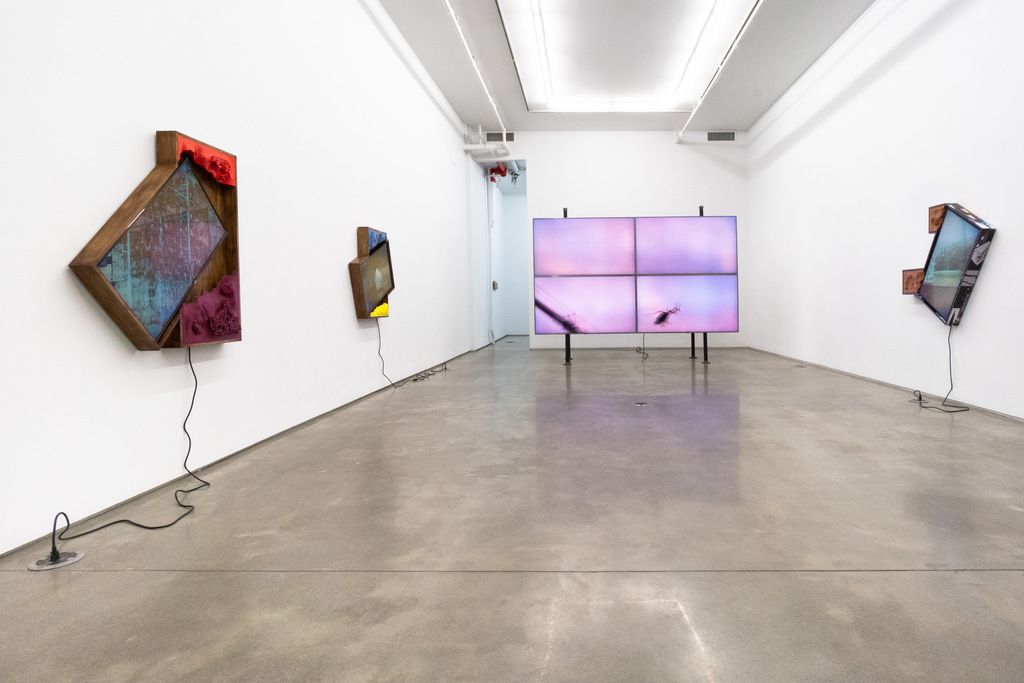 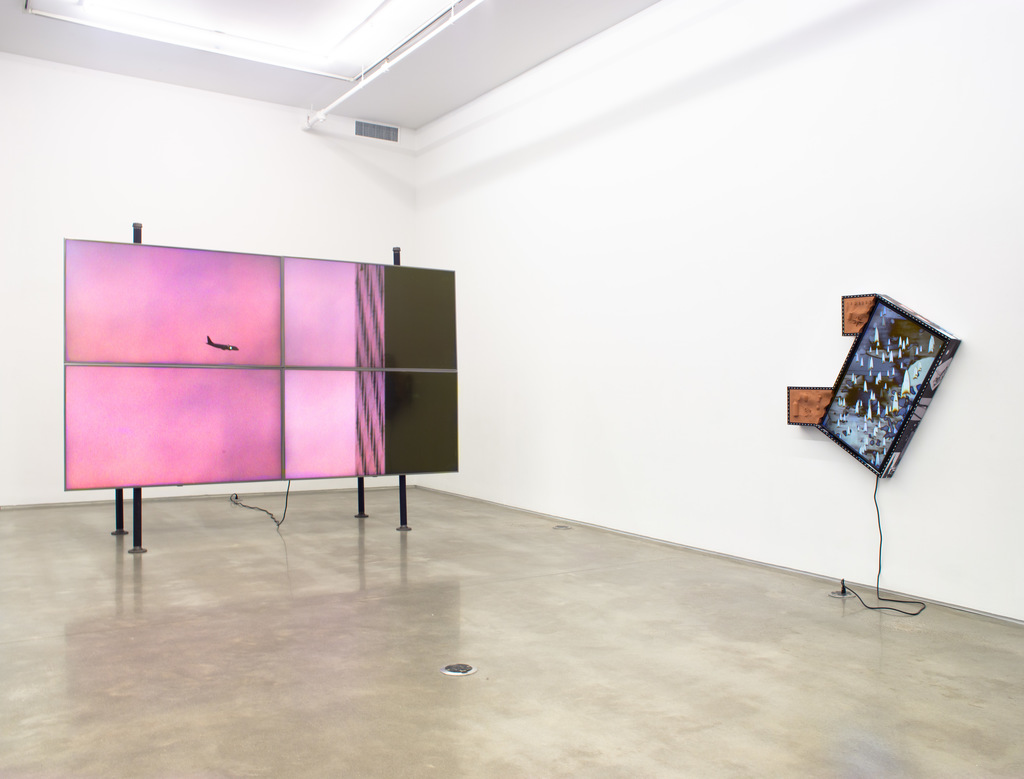 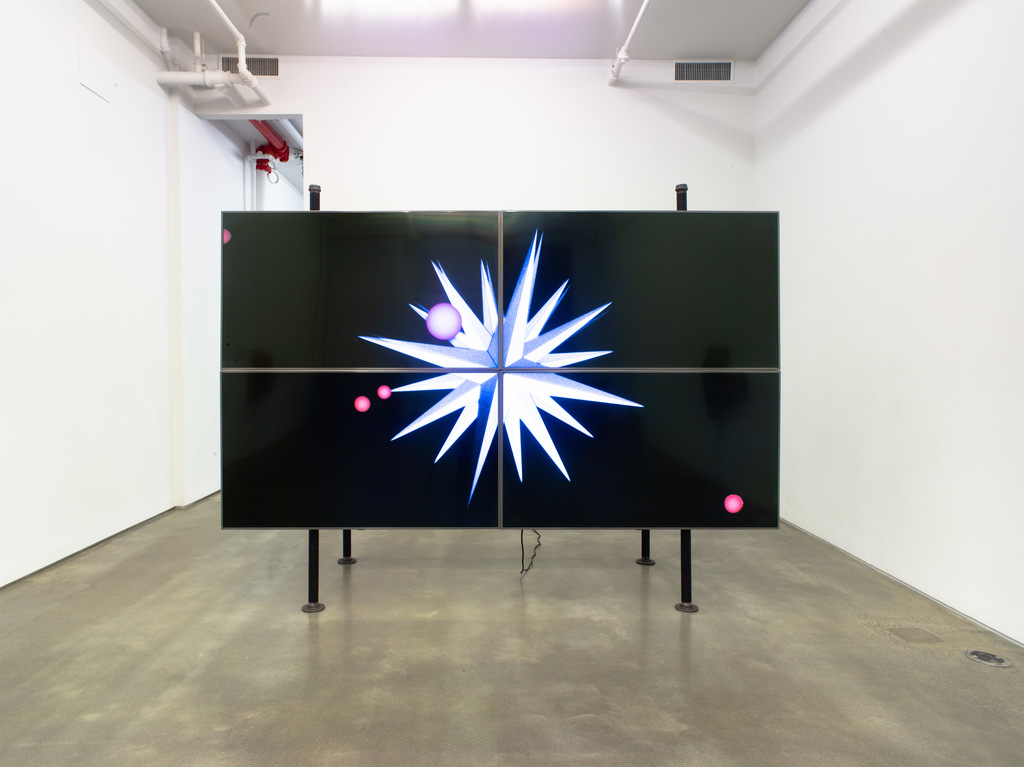 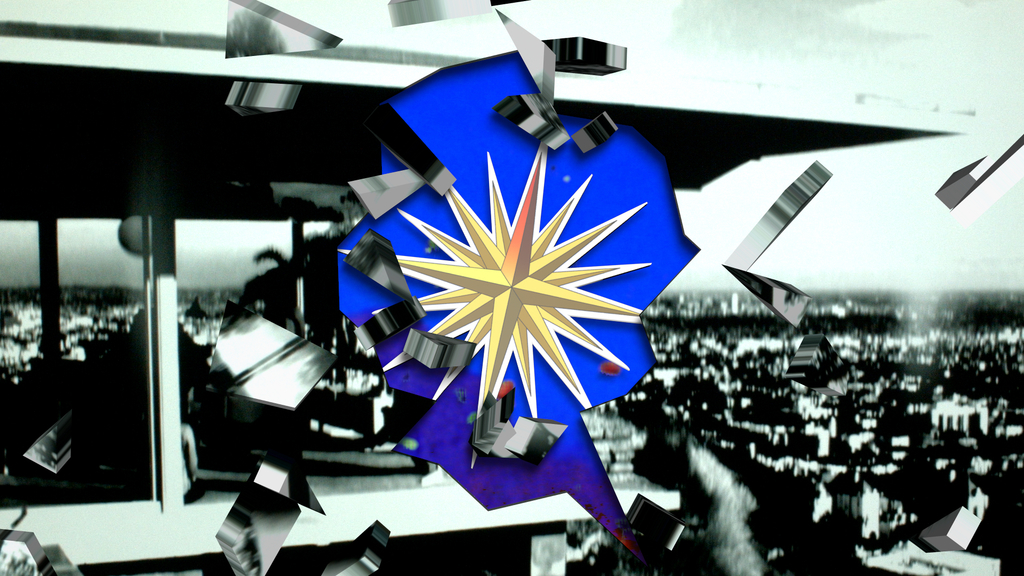 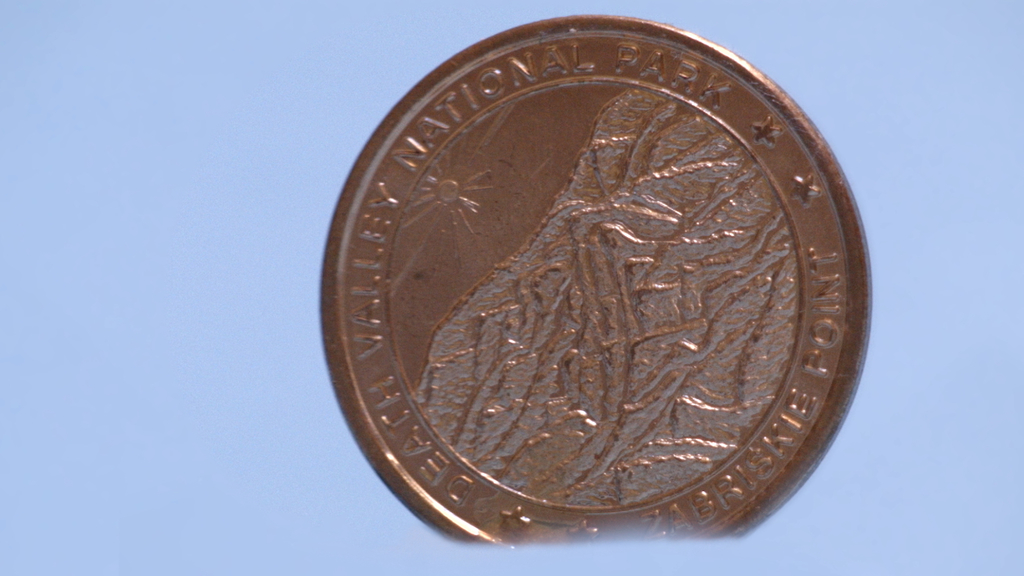 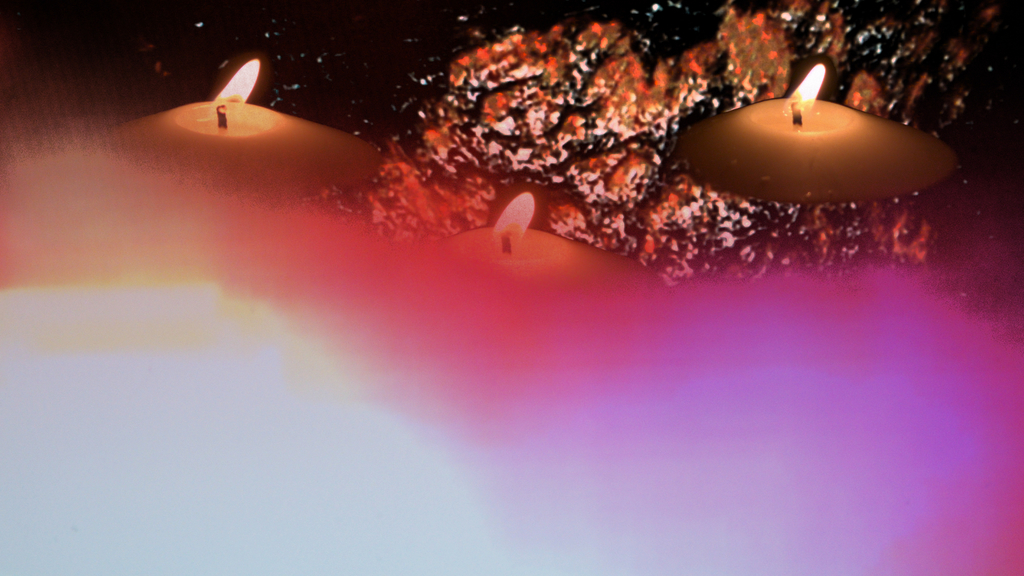 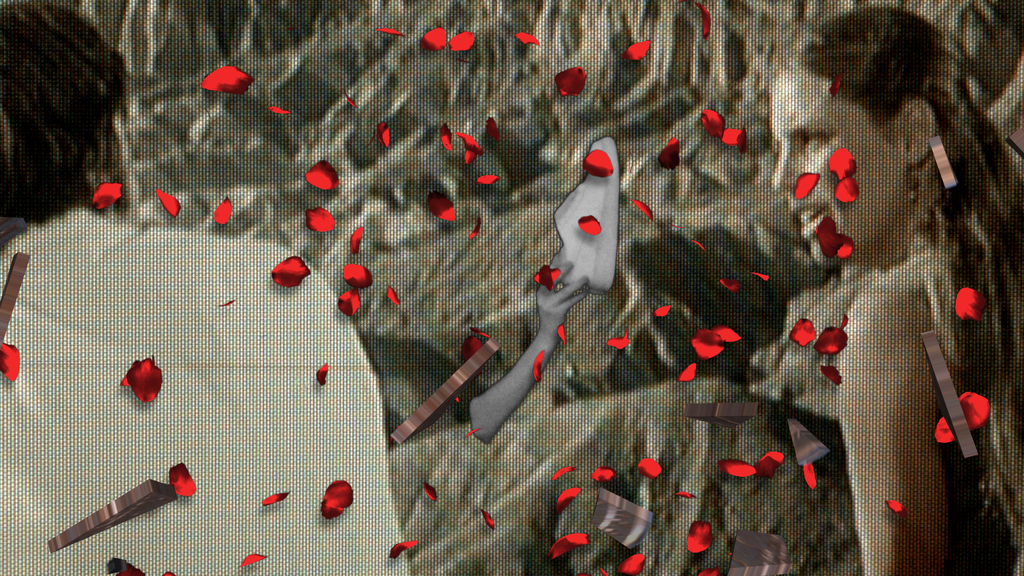 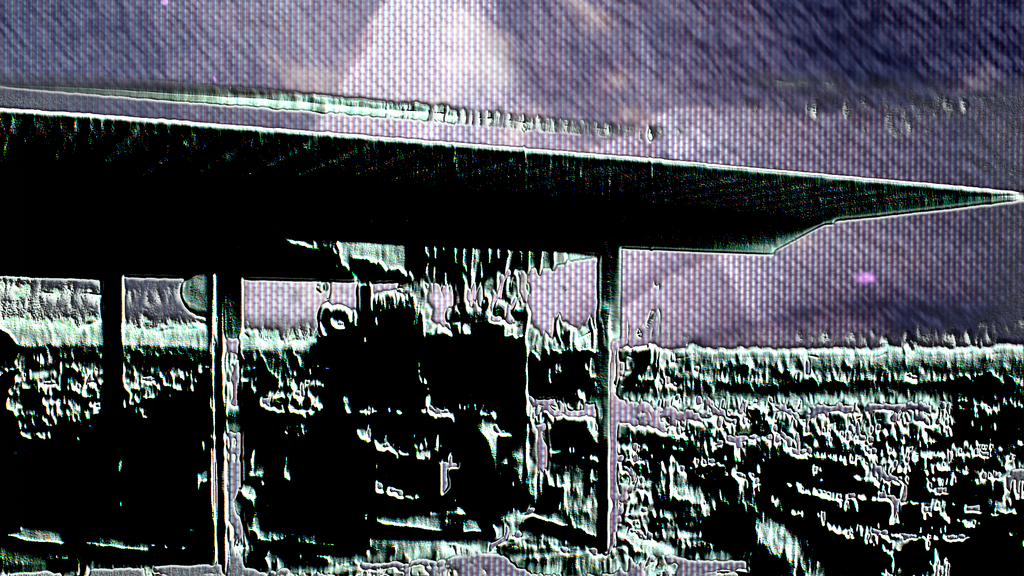 Team (gallery, inc.) is pleased to announce a solo show of new work by NY-based artist Collin Leitch. Entitled Camera Rider, the exhibition will run from 10 October through 09 November 2019. The gallery is located at 83 Grand Street, cross streets Greene and Wooster, on the ground floor.

For this exhibition, Collin Leitch will debut an intricate new film entitled Orienteering alongside three sculptural works that amplify the materiality of the moving image through a range of processings and interventions. “Orienteering” is to race against the clock in unfamiliar terrain, using topographic maps and compasses to navigate between graphics, symbols, and the physical world. As the title of Leitch’s film, it refers both to a navigation of media histories and modes of production as well as the visual and structural waypoints of two films, both ostensibly road movies, whose geographic trajectories he retraces and connects: Michelangelo Antonioni’s Zabriskie Point (1970) and Hollis Frampton’s Surface Tension (1968).

Orienteering’s opening sequence, a video-genesis of candlelight and analog feedback, is pushed along by sound design and an original score by collaborator Josh Abramovici. Synths swell as stars assemble into a peculiar constellation, then, at the film’s entrance, the audio moves beyond the image track to act as its own direct sensation. The artist’s own desert footage joins snippets of Antonioni’s film, syncing up at Zabriskie Point itself. Scenes of an orgy in the desert and the explosion of a house are leveled off with re-photography and animated particle clouds drifting through nebulous space. Where Antonioni employs architecture and geography for expressing character interiority, Leitch re-manipulates the material of an implied filmstrip, expanding the foreshortened depth of field that characterizes Zabriskie Point and its characters by animating the dark matter that circulates between them and articulating the volume of the video-computer space.

Leitch’s two-chapter travelogue, from the American West to New York, begins in the desert before moving on to Los Angeles proper. The explosive dénouement of Antonioni’s film is layered over images of the city at night before a radically variegated montage delivers us to contemporary New York. We emerge into daylight on the Brooklyn Bridge, as Surface Tension’s original breakneck shot into Manhattan has been slowed down, warped, and distorted; shot-matched views from present day are interspersed, retracing the route and reinhabiting the camerawork. Signs and waypoints abound within the canyons of New York, compressing temporal and spatial passages to construct a latticework of history.

In the entertainment centers shown alongside the film, orienteering serves to describe the layered positioning of elements within the picture plane and the reorientation of the plane itself. Consisting of video loops on monitors held askew in sculptural housings, these constructions domesticate the screen and complicate their roles as apertures. The image tracks themselves, comprised of scanned film negatives and rephotographed animations, present images that collapse and evolve just as quickly as they cohere. Sharp horizons and towering buildings preserve a True North sense of up and down despite the angle of the frame, before being subsumed by graphic transitions giving way to snatches of direct footage, that for a fleeting moment, attempt to take these pieces of television furniture at face value. Having been scanned, filmed, or re-produced, the interplay of these discrete elements continue the cycle of metamorphosis between film, its digital processing, and its physical interventions.

To insist upon the skin of the moving image and make of it something tangible, Leitch cultivates a heightened materiality through his meld of footage and editing that tests the malleable limits of its surface. His overcharged processings and re-photography reperform and replace the machinations of the cameraperson’s original operations, compressing the distance between the camera and the cutting room, hardware and software, cinema’s histories and its meta-histories.

Collin Leitch is an artist and filmmaker living and working in New York. He has participated in screenings including Channels Video Art Festival in Melbourne, Microscope Gallery, Brooklyn, and The Hammer Museum, Los Angeles. Recent exhibitions include a two-person show at King’s Leap in Brooklyn and a 2016 solo presentation of his work at The Mothership in Woodstock, NY. This is Leitch’s first solo exhibition with Team Gallery, having previously exhibited in the group show “Scenes of the American Landscape” in May of 2019.

The gallery is open from Tuesday through Saturday, 10am to 6pm. For further information and/or photographs, please call 212 279 9219.