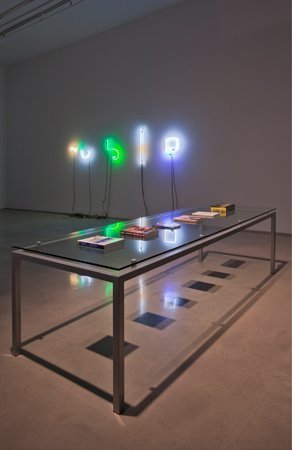 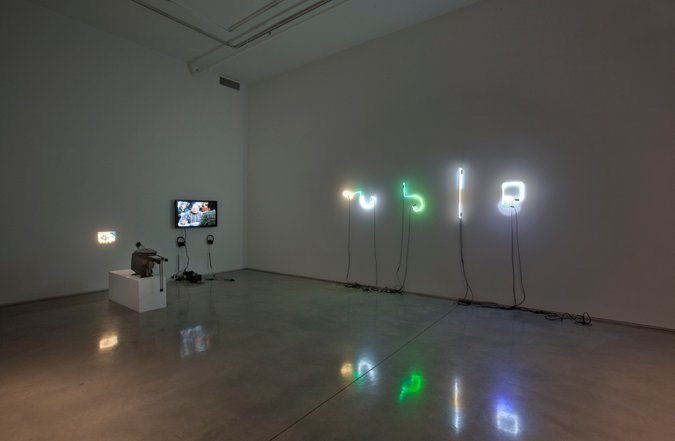 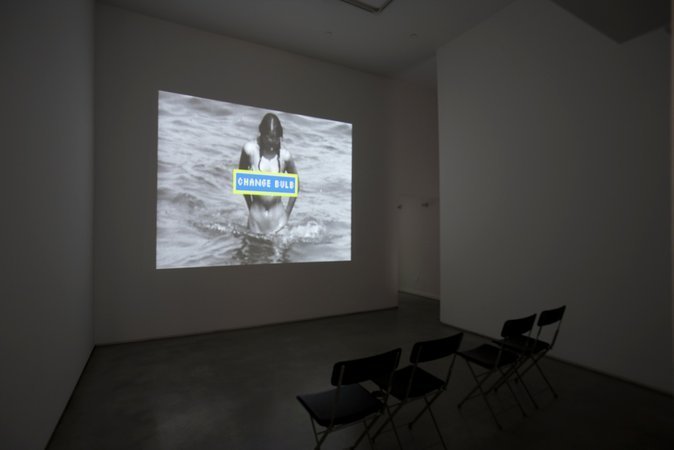 Team is pleased to present a two-person exhibition by New York-based artist Cory Arcangel and Brussels-based, French artist Pierre Bismuth. Entitled Cory Arcangel vs. Pierre Bismuth, the exhibition will run from November 3rd through December 23rd, 2011. Team Gallery is located at 83 Grand Street, between Wooster and Greene, on the ground floor. Concurrently, our 47 Wooster Street space will house a one-person exhibition of new work by Miami-based sculptor Cristina Lei Rodriguez.

Conceptualists Cory Arcangel and Pierre Bismuth disorient viewers by remixing and reversing emanations from contemporary mass media and pop culture. In this collaborative exhibition, each artist maintains his identifiable signature in the presentation of seven works: three Bismuth pieces chosen by Arcangel, three Arcangel projects selected by Bismuth, and one work created in tandem.

The collaborative piece included here is a presentation of Guy Debord’s 1973 film Société du Spectacle (Society of the Spectacle) with the instructional signal of a projector — “CHANGE BULB” — permanently blinking over the image track. While the original film contains intertitles listing philosophies excerpted from the filmmaker’s critical text of the same title, Arcangel and Bismuth insert an overriding, permanent text that operates as a reminder of the inevitable breakdown of technological devices and systems of viewing. Infused with the artists’ distinct brand of subtle wit and intellectual reversal, the action is a particularly Debordian gesture of viewer interuption — a détournement — exactly the kind of disruptive act the original film was considered to perform through its edits, excerpts, and appropriations.

The new works by Cory Arcangel further the artist’s practice of personalizing public data by changing a variable in a media or entertainment artifact to reveal moments of omission, obsolecence, and failure. In Living Situation, Arcangel re-inserts several coughs previously erased from a live recording of a performance of Beethoven’s Symphony No. 3 in E Flat Major (“Eroica”), Op. 55 by the NBC Symphony Orchestra. Arcangel’s newly remastered digital file is played on an iPod through a new lifestyle product called the XL Model Geneva Lab GenevaSound Stereo. In Various Books / Various Scents, Arcangel infuses a selection of influential cultural texts and works of popular literature, like Ice-T’s autobiography, with mists of celebrity-endorsed perfumes. The gesture weds the marketing agendas of celebrity scents and pop-lit with the critical strategies of theoretical texts, all of which threaten to evaporate in an instant.

Similarly, Pierre Bismuth creates new work by manipulating the intrinsic structural qualities of media objects and images. Redeemed presents the discarded fragments from various neon fabrications, most likely advertisements. Bismuth realizes the mismatched sizes and colors of neon tubes as new, complete works, delivering them to their literal linguistic designations — the origin of the word neon translates to “something new” — so there is a structural completion in both form and meaning. For his 2007 video Proposal for Improbable American TV Program – Part II - Seinfeld, Bismuth adds layers and layers of the sitcom’s ubiquitous laugh track until it becomes impossible to make out any of the dialogue; the simple transformation foregrounds the invasive nature of televisual prompting. Bismuth nullifies the work of comedy with laughter.

The two artists are showing together here at the invitation of the gallery. They are not intimate friends but rather two individuals who share a certain energetic and anarchic approach toward the creation of artworks in a mode one might refer to as “parasitic”. All of the pieces which the artists have chosen for the show have been created by attaching a gesture to an artwork that already is imbued with meaning. Are the artists simply re-animating these previous meanings, merely re-contextualizing them historically, or are they creating radical new meanings through their interventions?

Cory Arcangel (b. 1978) has mounted major one-person exhibitions at The Whitney Museum of American Art, New York; Barbican Centre, London; the Hamburger Banhof Museum Für Gegenwart, Berlin; Museum of Contemporary Art, North Miami; and Migros Museum für Gegenwartskunst, Zurich. His work has also been exhibited at the Smithsonian Museum in Washington D.C., The Museum of Modern Art, New York and numerous others. A survey show will be held at the Carnegie Museum in Pittsburgh in 2012.

Pierre Bismuth (b. 1963) has been exhibiting his work internationally for over twenty years. Prominent monographic exhibitions have been held at the Kunsthalle in Basel, Nice’s Villa Arson, Rotterdam’s Witte de With, MAMCO in Geneva, and the Kunsthalle in Vienna. His work was included in the 2001 Venice Biennale, in Manifesta 4, and most recently in the 11th Biennale de Lyon, 2011. Bismuth is the only fine artist to have ever won an Academy Award—in 2002 for Best Original Screenplay with Michel Gondry and Charlie Kaufman for the film Eternal Sunshine of the Spotless Mind.