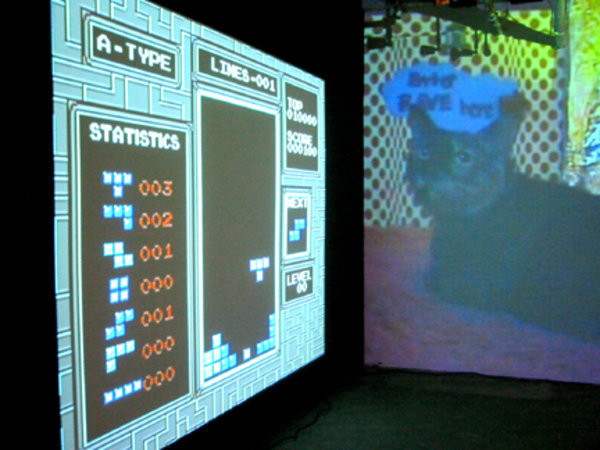 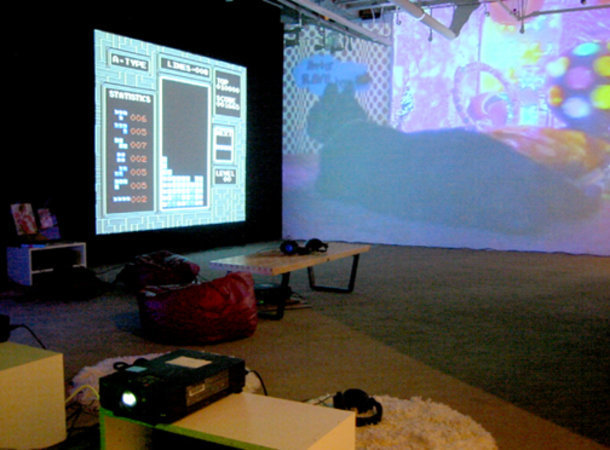 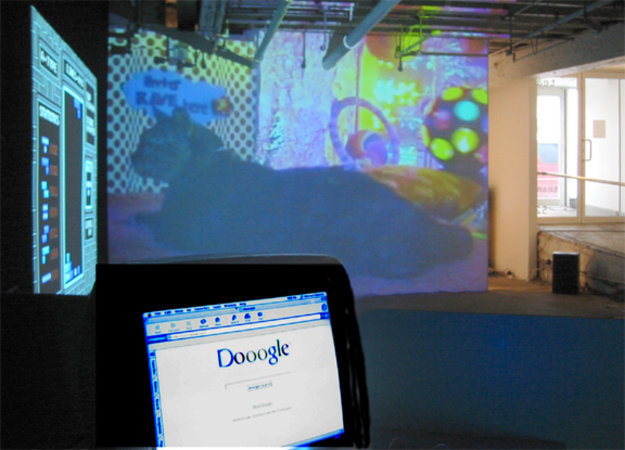 Team will present new work by Cory Arcangel from the 13th of January through the 12th of February 2005. The gallery is located at 527 West 26th Street, between Tenth and Eleventh Avenues, on the ground floor. This exhibition, entitled Welcome to my Homepage Artshow, is the first solo show in New York by Arcangel, a founding member of the Beige Programming Ensemble. The show includes a number of new hacked Nintendo game cartridges — the work that Arcangel has become known for — and a number of new works in the medium of video. In the former group are a fully interactive Ipod® programmed for the Nintendo® system and an absurdly slowed down version of Tetris®. In the latter group are Sans Simon, a video of Simon and Garfunkel in which the artist uses his hand to hide Simon’s presence, and Geto Boys/Beach Boys in which videos by the two eponymous bands are played side by side creating an oddly harmonic synchronicity. Arcangel, who graduated from Oberlin with a degree in Technology in Music and the Related Arts, came to the artworld through a number of internet based activities. These, in turn, lead to invitations from institutions for lectures and demonstrations, a performative aspect which naturally called for the creation of digital environments. These latter works evolved into stand-alone artworks, frequently exhibited with soundtracks created by Arcangel in collaboration with others, such as Paul B. Davis, a London-based disc jockey. Arcangel is interested in keeping the possibilities of collaboration open, as well as in continuing to reach out to other cultural fields for inspiration, fusing autonomous artworks with temporary and net-based actions. The show at Team, for example, marks the launch of dooogle.com, a search engine which only yields results about Doogie Howser, M.D. Also available is a new piece of software called T.A.C. (Total Asshole Compression), a program which increases the size of any file passed through it. Arcangel’s work was included in the 2004 Whitney Biennial. During the past year, he has also shown his work in New York at The Museum of Modern Art, The New Museum of Contemporary Art and at The Guggenheim Museum, and at the Royal Academy in London. Arcangel will be the subject of a one-person exhibition at Zurich’s Migros Museum this upcoming April. In addition, solo shows are planned for the Vilma Gold Gallery in London and Brändström & Stene in Stockholm. A simultaneous exhibition, a collaborative endeavor with the artist group Paper Rad, is presented in SoHo at Deitch Projects from the 15th of January through the 19th of February 2005. This is Arcangel’s first solo show at Team. We are really pleased to add him to our roster of artists.