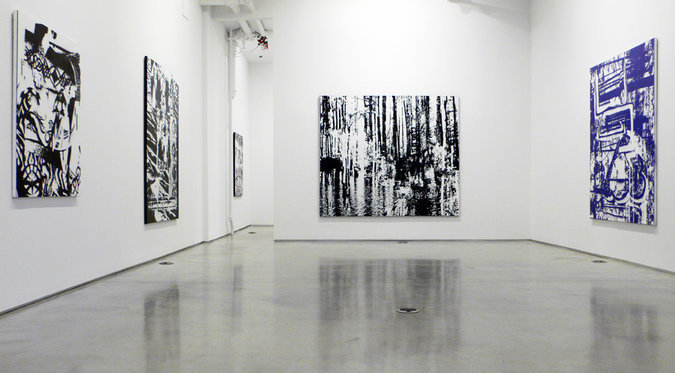 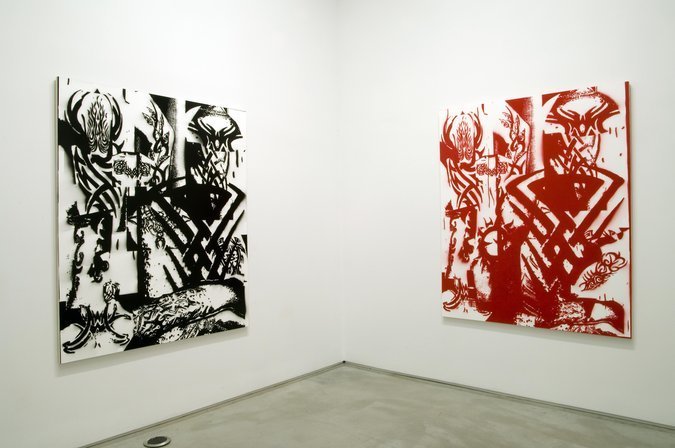 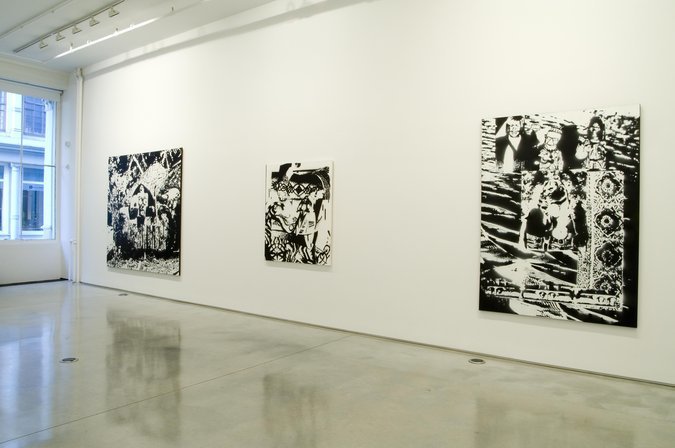 Team is pleased to present a show of new paintings by the Los Angeles-based artist David Ratcliff. The exhibition, entitled Cosmetic Surgery, will run from the 3rd of May through the 9th of June 2007. Team Gallery is located at 83 Grand Street, cross streets Wooster and Greene, on the ground floor.

For his first New York solo show, David Ratcliff culled his imagery from the banal pictures circulated on the web, particularly those in which individuals use the net to construct and disseminate their notions of self. For this new body of work, however, Ratcliff has shifted his focus to the use of source-images that ‘’look painterly.’’ The paintings on view combine the chaotic characteristics of nature—jumbled masses of trees, water and vegetation—frequently juxtaposed with images of tattooed and painted body parts. Ratcliff here uses nature as both image and pattern, and as both central focus and noise.

Ratcliff’s paintings are made from elaborately complex hand-made stencils constructed on his computer and then printed onto standard office-grade paper. Over the course of fourteen days the stencil is cut out and painstakingly attached to the surface of a painting whose ground is either white or black. Having chosen one color, Ratcliff then sprays the picture in twenty minutes. The wet paint destroys the stencil and a great deal of bleeding occurs where the spray paint has ducked behind the paper mask.

Simultaneously recalling the paintings of both Andy Warhol and Chris Wool, Ratcliff’s works consistently negotiate the oppositions of positive and negative space, of abstraction and figuration, and of a conceptual rigor and the punk aesthetic. Ratcliff’s latest work enlarges his dialogue with, and functions as a foil to, such painting types as the decorative, the expressionist, the romantic, and the photo-based. As concerned with Kiefer and Kippenberger, as he is with the average American military man’s obsession with tribal tattoos, Ratcliff’s work has grown more affective, compelling, and singular.

This is David Ratcliff’s second solo show at Team. Since his debut at our Chelsea space two years ago Ratcliff has shown his work in New York at PS1, in Los Angeles at Blum & Poe, and in Berlin at Peres Projects, among others. He participated in the Turin Triennial and a solo exhibition of his paintings runs concurrently at Galerie Rodolphe Janssen in Brussels.