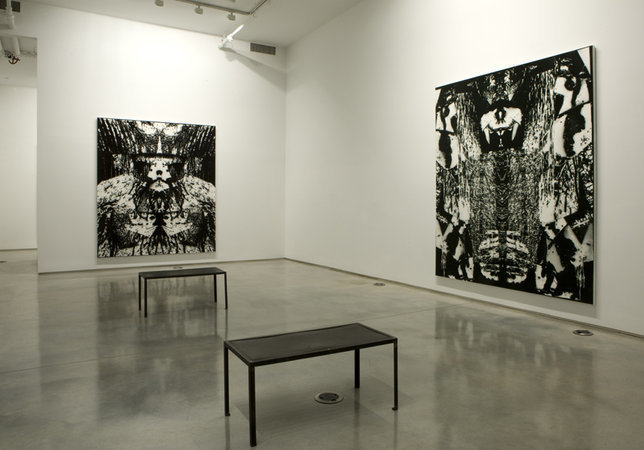 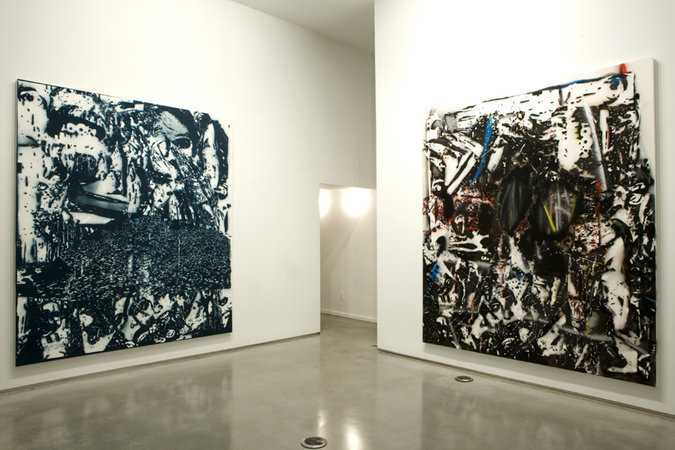 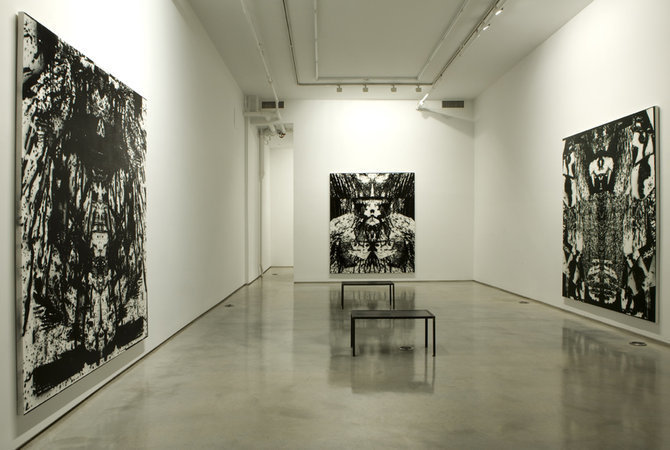 Team is pleased to present an exhibition of new paintings by the Los-Angeles based artist David Ratcliff. Entitled Defect’s Mirror, the exhibition will run from the 9th of October through the 8th of November 2008. Team Gallery is located at 83 Grand Street, between Wooster and Greene, on the ground floor.

Abstraction has begun to occupy a dominant position in David Ratcliff’s work, as the visual noise that crept into his earlier narrative pictures mutates into the central structuring presence. The series of paintings entitled Mirror began with recognizable images, which were then cut and re-combined into compositions that are then reflected. Along the way this imagery breaks down becoming largely unreadable. The results resemble Rorschach tests where dark forms do not reveal themselves over time but rather force interpretations of personalized nightmares.

Ratcliff’s paintings are made from elaborately complex hand-made stencils constructed on his computer and then printed onto standard office-grade paper. Over the course of fourteen days the stencil is cut out and painstakingly attached to the surface of a canvas whose ground is either white or black. Having chosen one color, Ratcliff then sprays the picture in twenty minutes. The wet paint destroys the stencil and a great deal of bleeding occurs where the spray paint has ducked behind the paper mask. Lately, Ratcliff has taken to salvaging portions of these stencils and making what he refers to as “second paintings.” These are looser and more distorted, allowing abstraction to play a larger role in his practice.

Violence has been the binding force behind Ratcliff’s paintings. This violence has manifested itself not only in the manner in which his imagery is chosen, dissected, and rendered but also in the way in which, blade in hand, his process is enacted. The artist’s focus, in this new body of work, shifts away from the manner in which American mediated culture pursues an aesthetic of violence and towards the feeling of dread that permeates contemporary American life. In his new paintings it is hard to put your finger on exactly how he has so successfully conjured up an aesthetic of horror but that is clearly his coup.

On the occasion of the exhibition, Team has published Ratcliff’s first catalogue, which features an extensive interview with Bob Nickas.

Ratcliff has had one-person exhibitions with Tomio Koyama in Tokyo and with Rodolphe Janssen in Brussels. This April he will have a one-man show with Maureen Paley in London. This is Ratcliff’s third solo at Team.