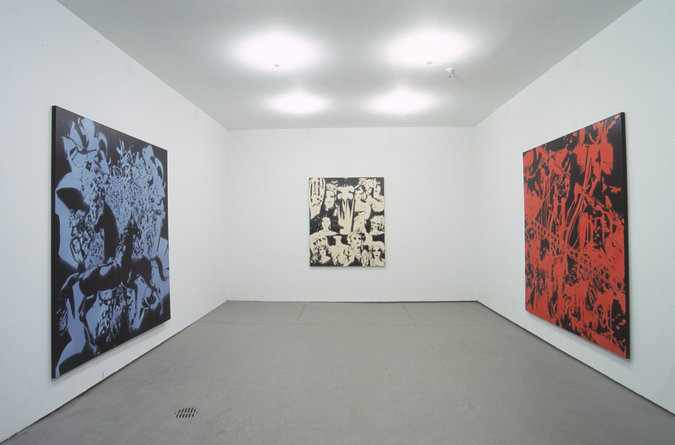 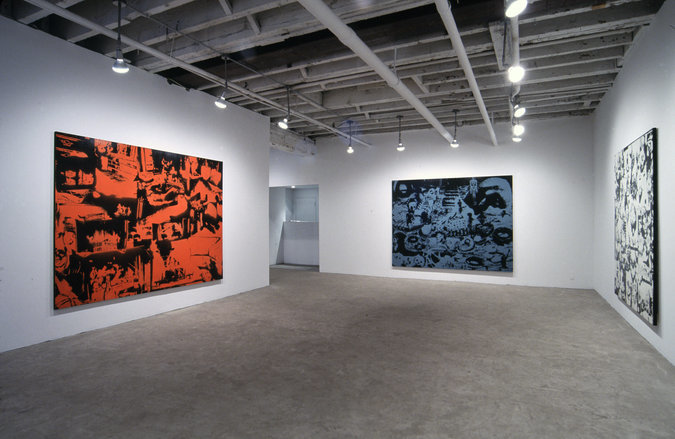 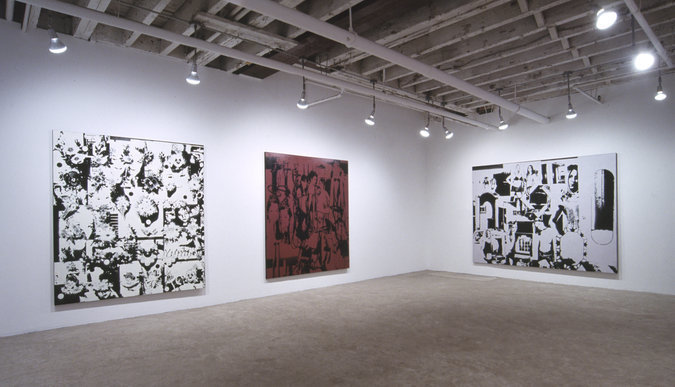 Team Gallery will present a solo exhibition of new paintings by the LA-based artist David Ratcliff from the 7th of April through the 7th of May 2005. The gallery is located at 527 West 26th Street, between Tenth and Eleventh Avenues, on the ground floor.

David Ratcliff’s first solo exhibition takes as its title a line from Bret Easton Ellis’ novel American Psycho. Ratcliff’s compendium paintings share with Ellis something of the elegant formal violence that seemed the only way to give voice to the decade that most relished acquisition for acquisition’s sake. As a matter of fact, Walead Beshty, the artist and writer, has called Ratcliff’s new works “1980’s history paintings.” Ratcliff, like Ellis, is fond of lists, allowing the gathering together of signs to do the work of cultural critique. In a sense, the collecting together of material is as crucial as the manner in which it is deployed.

Ratcliff’s paintings are made from elaborately complex hand-made stencils which are constructed on his home computer and then printed onto standard office-grade paper. Over the course of fourteen days the stencil is cut out and painstakingly attached to the surface of a black painting. Having chosen one color, Ratcliff then sprays the picture in twenty minutes. The wet paint destroys the stencil and a great deal of bleeding occurs where the spray paint has ducked behind the paper mask.

The imagery, culled from pornography, mail order catalogues, society pages, interior design magazines and the cesspools of the world wide web creates a cosmology of affluence and power, where human beings function largely as decorative elements. Not only does Ratcliff tap into the seedier aspects of LA Noir, but his paintings also call to mind the aesthetic systems associated with low-tech fanzines and street posters. In addition, the composition of the paintings sometimes mimics that of brutally clumsy home-page design. As much a child of Bruce Connor as of Christopher Wool, Ratcliff’s paintings map out desire, passion, constraint, opulence, decay and misogyny in “lists” of doll heads, flowers, furnishings and accessories. Ratcliff taps into the shallow emotional range of pornography and the glitzy, albeit always lacking, glamour of that genre.

Simultaneously recalling paintings on velvet, black-light posters and Warhol’s disasters and race riots, Ratcliff’s works consistently negotiate the oppositions of positive and negative space, of abstraction and figuration, and of a conceptual rigor and the punk aesthetic.