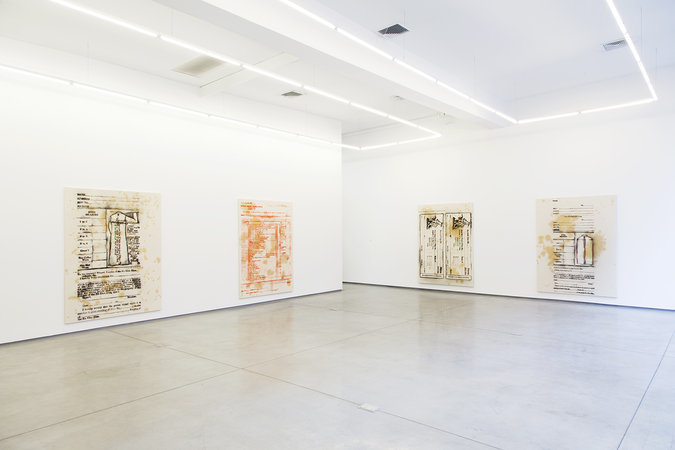 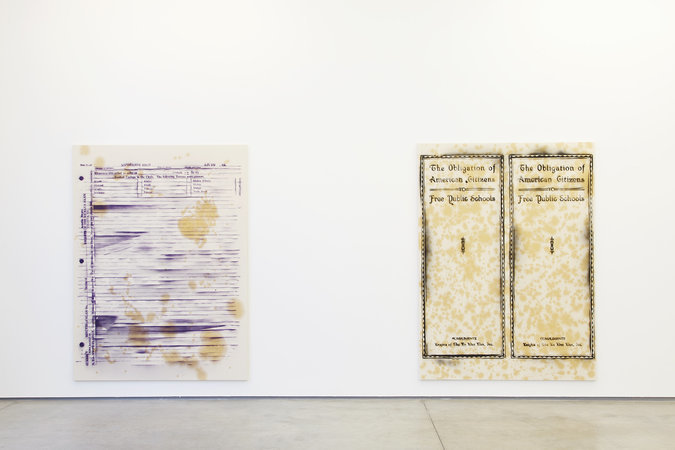 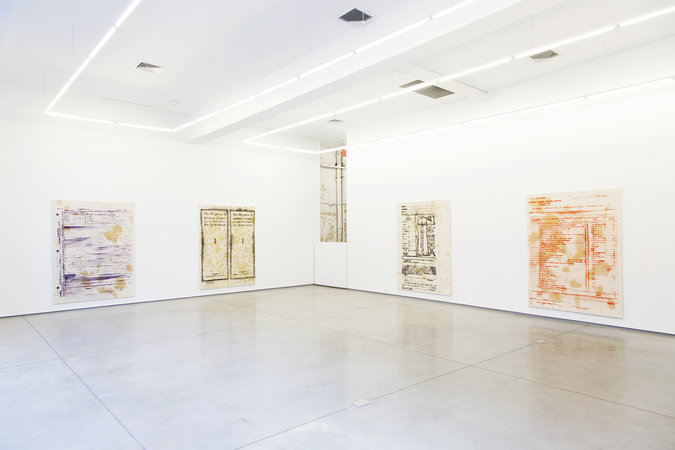 Team (gallery, inc.) is pleased to announce a solo show of new work by Los Angeles-based painter David Ratcliff. Entitled Klan Paintings, the exhibition will run from 19 January through 02 March 2014. Team is located at 47 Wooster Street, between Grand and Broome. Concurrently, our 83 Grand Street space will house a one-person show by the German photographer Carina Brandes.

David Ratcliff’s process is always appropriative: he gathers visuals (often drawings or texts) from a wide variety of media, constructs large hand-made stencils and then spray-paints the collaged images onto canvases. In his latest body of paintings, the artist turns his attention exclusively to the Ku Klux Klan. These works take as both their form and their subject the official documents of the organization: incident reports, order forms, meeting minutes, etc.

These paintings appear innocent upon first glance, disguising under their quotidian bureaucracy the myopic world-view of a violent, racist organization. They feature a kind of fantasy language –- the consistent replacement of the letter “C” with “K,” for example –- and are totally divorced from commonly-held contemporary worldviews. These pieces expose the ways belief systems can relate to fiction and constructed realities, but do not suggest any emotional or political agenda whatsoever. Instead, Ratcliff uses this difficult subject matter to explore the ways in which paintings can affect an audience.

The exhibition is streamlined, both visually and in its subject matter, precluding any excess content or distraction. The paintings share a common scale of 84 by 62 inches, while the color palettes are limited, individual works using only a single shade of paint. The backgrounds consist of raw canvas covered in yellow grease stains. These oily blotches seem familiar, but whether they recall the discarded wax paper of a fast-food hamburger, or actionist paintings, or something else altogether cannot be said.

These paintings exist in the wake of Philip Guston’s portrayals of Klansmen. Both consider how paint engages in and engenders conversation, and the ways in which a painting can and cannot serve as a mirror. Guston’s works, however, appear to have a gentle regard for their Klan subjects, implicating their viewers as similarly ugly and flawed. Ratcliff’s works lack any such warmth. Largely avoiding pictorial representation, they appear abstract and systematic, closer in appearance to a form received at the doctor’s office or DMV than to traditional paintings.

These are history paintings, in the literal sense that they recreate actual historical documents. They are statements of facts, providing information rather than adopting a particular stance. In this regard, they take a cue from Gerhard Richter’s October 18, 1977, his cycle of painterly reproductions of photographs taken of the extreme leftist Red Army Faction after their arrest. Like the RAF works, the Klan paintings avoid censuring or supporting their subjects, leaving any such judgment entirely to the viewer.

This is the artist’s fifth solo show at Team.