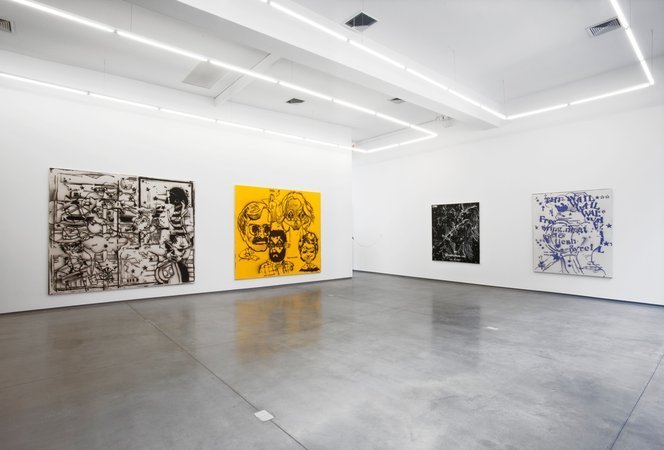 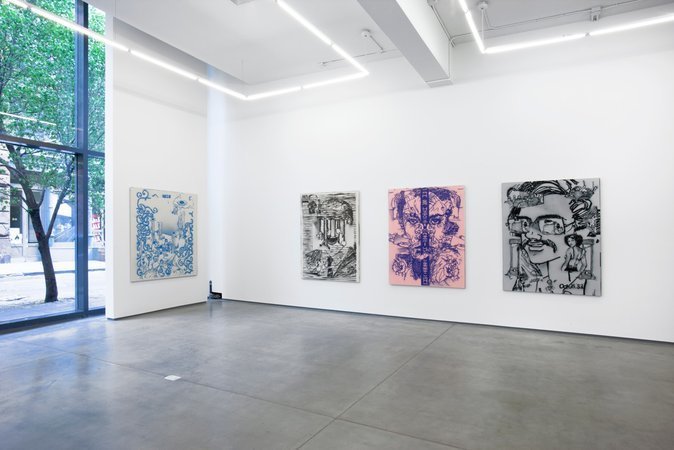 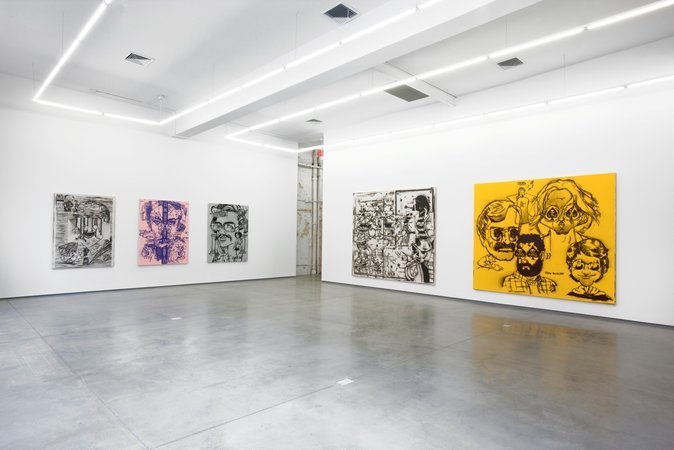 From this point onward, Team Gallery will present two simultaneous exhibitions at two different SoHo locations. We are pleased to inaugurate our second space with a solo presentation by Los Angeles based painter David Ratcliff. The exhibition, entitled Portraits and Ghosts, will run from the 5th of May through the 11th of June 2011. Team’s second space is located at 47 Wooster Street, cross streets Grand and Broome, on the ground floor. Our 83 Grand Street space will concurrently house an exhibition by Berlin based artist Jakob Kolding.

Portraits and Ghosts finds Ratcliff moving away from previous paintings in which chaos and congestion created an all-over wall of density. As the artist begins to explore increasingly open pictorial compositions, fields that once threatened to overflow are allowed the breathing room of surplus negative space. With a less restrictive palette, a heightened interest in the possibilities of narrative and text, and hand-rendered, rather than photographic, source material, Ratcliff continues his consideration of a distinctly American iconography of violence. The artist’s ongoing engagement with history painting is brought to the fore through an increased sampling of images from the past. When contrasted with his previous exhibitions, the paintings display a marked change in the direction of his work.

In Ratcliff’s process found imagery is sampled and reconditioned to orchestrate a broad range of expression. After the desired material is sourced, Ratcliff creates a collage on the computer and prints it out onto standard 8.5 x 11 inch paper, taping numerous sheets together to form a larger template, and painstakingly cutting it into a stencil. Ratcliff then arrives at the activity of painting, spraying acrylic through the stencil onto the canvas. When completed, the paintings display a rupture between Ratcliff’s rigidly controlled process and the chance marks that are left during the application of paint. Outlines are registered where masking tape once held Ratcliff’s stencils to the canvas, as well as irregularities due to directional shifts and overspray. These painterly slippages make a deft argument for the persistence of the artist’s hand.

To construct his images, Ratcliff performs a complicated surgery where a diverse range of material is spliced together. Drawings, political cartoons, children’s illustrations, text, and other graphic clips are sutured into controlled disarray. Although seemingly rendered through mostly mechanical means, the paintings evoke a surprisingly multifaceted emotional tenor. The Ghosts, whose subjects are frequently macabre, often attain an uncanny serenity. In the Portraits, a quasi-schizophrenic formalism underlines the presence of a practiced psychological dialectic. Channeling the stylistic juxtapositions of Sigmar Polke, the paintings often suggest multiple personalities drawn into a dissonant coexistence.

In the classical sense, the Portraits are paintings of faces. Many are anchored by texts, which are made purposefully difficult to decipher. Either by Rorschach or obfuscation, they begin to hint at concrete subjects, only to collapse back into the frame. This corruption of legibility becomes integral to the structuring of the work. Ratcliff’s motifs intermingle to challenge latent relationships between language and image, and text is rendered insufficient in providing definitive meaning. Similarly, the Ghost paintings appear as frozen whispers on the surface of the canvas, recalling the ephemeral nature of a shadow or vapor. Like drawing into one’s breath on a window, they threaten to evaporate altogether.

Rather than rendering an easy read, Ratcliff chooses to allow subtle points of reference to enter the work. Dates that were originally a part of his found imagery are included in several of the paintings, serving as nostalgic remnants from the past. Additionally, positioning his paintings in the vein of an archive, his titles often refer to specific cultural signposts or historical moments. One painting’s title, “They Just Wanted to Embarrass Us,” comes from a political cartoon about the suicides-by-hanging of several prisoners at Guantanamo Bay, an image of which also appears in the painting. Another, “Sunrise at San Quentin,” refers to a California prison, home to the state’s only death row facility. These moments of specificity highlight Ratcliff’s increasingly complicated, sometimes harrowing, depiction of an intensely American hard-drive.